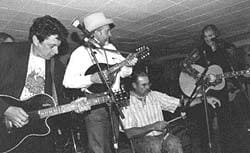 Give Robert Redford a hug the next time you see him because his 1998 film The Horse Whisperer is responsible for the reunion of the Flatlanders. The three members of the group — Joe Ely, Jimmie Dale Gilmore, and Butch Hancock — were asked to record a song for the film’s soundtrack. They did, then played a set in Central Park, and are now reunited (for a time at least). And you thought that film contributed nothing to society. Touring for the first time, the Flatlanders consists of three singer-songwriters from the Lubbock, Texas area. Uniting in the early ’70s, Ely, Gilmore, and Hancock cut a record together which was released as an 8-track. It duly vanished — from sight at least. This recording, along with the work of Gram Parsons in the same period, is now credited with paving the way for what some call the new traditionalist movement in country music. ”Country” does not fully describe what the Flatlanders are up to. Hancock is interested in folk, Ely is drawn to rock (he opened for the Clash at one point in his career), and Gilmore prefers, well, country. Their solo careers tend to follow these preferences but each artist’s albums feature appearances and songs by the others (not to mention various styles as well). They have “moved on” but clearly not moved very far apart as amply demonstrated in concert. Since the early ’70s each singer’s voice has grown more distinctive, and it is extraordinary that they sound better together now than ever before. Hancock has more West Texas dirt in his voice even as he moves further away, Ely’s growls get deeper, and Gilmore’s warble gets a little closer all the while to the warble of a musical saw (the one element of their original recording missing from their concert tour). The song selection allows each artist’s tastes to be indulged and transformed by the other two. Rock, folk and country all make appearances, sometimes all at once. Ely handles the more rambunctious songs (the show opening “I Had My Hopes Up High”), Gilmore the dreaming lyrics (“Keeper of the Mountain”), and Hancock delivers the necessary twang (“One More Road”). Whoever does the singing, their ease on stage is infectious, sometimes seeming to decide moment to moment whose turn it is to sing or tell a story. Ely’s recounting of a dream involving an asbestos sleeping bag (!) and Hancock’s story of an International Harvester tractor whose second gear at 2/3 throttle is in the key of G were entertaining and greeted with howls from the audience. Even in Northern Virginia, Hancock’s joke at getting stuck in traffic on Loop 289 around Lubbock drew some knowing laughter. You don’t have to be from Texas to be entranced by the music these men make together. The gentle “South Wind of Summer” is the song from the Horse Whisperer soundtrack and the rousing Hancock tune “West Texas Waltz,” with grinning verses by all three singers, says much about West Texas itself. Another highlight was Gilmore’s “DFW” from his latest solo album. This song is a fascinating comparison of Dallas and Fort Worth and feels like a continuation of the band’s most famous track, which Gilmore also penned: “Dallas.” The ambivalence at the heart of “Dallas” spreads out far beyond Dallas or Texas. This song demonstrates how the Flatlander’s songs regional flavor resonates universally. The song nails the city and is also a meditation on the allure and repulsiveness of every big city when you are from a small farming community: “Dallas is a jungle but Dallas gives a beautiful light.” Since Ely kicked the song off it was more energetic, and less haunting than the Flatlander’s original recording, but still powerful. The newer material featured in concert emphasized the group’s harmony and the sound of their voices in unison. Though “Julia” may not up live to their own lofty standards with its predictable crescendo chorus, “Right Where I Belong” and “I Thought the Wreck Was Over” (assumed titles) are wonderful. The set (almost necessarily) also included Terry Allen’s “Gimme A Ride To Heaven Boy” and two by Townes Van Zandt (“White Freightliner Blues” and “Snowin’ On Raton”). Another cover tune played here, “Hello Stranger,” is a Carter family song. Too many bands to count have surely covered their material, but one springs to my mind: Uncle Tupelo (“No Depression” on the album of the same title). Though now split into the bands Wilco and Son Volt, these artists, among others, continue to show the influence of Gram Parsons, and yes, the Flatlanders. Wilco’s magnificent Summer Teeth released last year features everything from rock to folk to country. This concert — featuring some 20 songs of various moods and styles — was thrilling, and gives me every reason to believe the Flatlanders will deliver an equally far reaching album. They do not act as though they are in any hurry, so look for it whenever they get around to releasing it. For now, their concerts more than suffice. (Additional reporting by Karl Reinsch)