It’s a Saturday night in Sacramento and the downtown area around the swank new Golden 1 Center is buzzing as if people are waiting for a spaceship to appear because the alt-rock heroes known as the Foo Fighters are in town. Dave Grohl and his band of merry mates have carried the torch for 20th-century rock ‘n’ roll here in the next millennium like few others, consistently cranking out one great guitar-driven album after another while building a cross-generational appeal that enables them to keep selling out arenas across America.

Grohl’s ability to transmogrify himself from being the powerhouse drummer of one of the most influential alternative rock bands of the early ’90s into a frontman/guitarist for a band that has equaled and even surpassed the success of Nirvana is one of the greatest and most unlikely second acts in rock history. And hallelujah for that because this world has gone mad and needs all the life-affirming rock power it can get here in this year that finds the worst sort of greedhead occupying the Oval Office and endangering all of humanity.

The “Sauced” barbecue bar next to the arena is jammed with concertgoers in the preceding hours what with its authentic Southern BBQ that does swine the right way, an extensive whiskey selection, widescreen TVs for watching the day’s college football conference championship games, and a truly stellar variety of California craft beers from all across the Golden State. Fans watching the late games see the Miami Hurricanes exposed as fraudulently overrated pretenders in a 38-3 drubbing at the hands of the Clemson Tigers in the ACC title game, while the Ohio State Buckeyes hang on for a 27-21 win over the pesky Wisconsin Badgers to take the Big 10 championship. But the team that has everyone united is the Foo Fighters.

The Foos hits the stage at a quarter to nine and proceed to rock Sacramento as the California capital has surely not been rocked in some time. Grohl alludes early on to being ready for a three-hour show and playing songs from each of the band’s albums, and he’s generally not known for hyperbole. The band opens with the hard-charging “Run” from the new Concrete and Gold album and then throws down a trifecta of smash hits to make sure everyone’s energized with “All My Life”, “Learning to Fly”, and “The Pretender”. Foo Fighters’ three-guitar attack with Grohl, Chris Shiflett, and Pat Smear is relatively unique in this era, creating a mammoth wall of sound that brings the songs to life with a high voltage that has the fans on the floor and in the lower bowl rocking out with a fervor. Grohl makes it a point to connect with those in the arena’s distant upper regions too, ever the working class hero true to his roots.

The light show is relatively stripped down for most of the show, save for some key moments of increased psychedelic theatrics such as on the new album’s”The Sky Is a Neighborhood”. Grohl says that the song which is currently #1 on the Active Rock Radio chart was the last song written for the album and was inspired by a look up at the night sky in Hawaii, which led him to recall a video from renowned astrophysicist Neil Degrasse Tyson. “It basically talks about the atoms that comprise life on Earth and make up the human body are traceable to the beginnings of our universe,” Grohl told Rolling Stone in August. “Stars that go unstable and collapse and explode and just scatter their guts, their fundamental ingredients of life are all over the universe and forming solar systems and stars orbiting planets have the ingredients for life itself. And when you look up at the night sky, you realize that you’re not only part of the universe, but the universe is part of us. It really moves me.”

“It’s crazy because a lot of that [the song] is based on dreams that I’ve had about 20 years ago, where I was walking along this coastal city in Italy just as the sun was going down and the stars were coming out and then the sky just imploded into millions of UFOs swarming around,” Grohl continued. “So everyone just fell to the ground and looked up, and there were these films being projected in the sky of the evolution of man, and the new territories, and how they’ll be divided, and why we’re here and how we were created. Just this really trippy dream that stayed with me my entire life.”

The band is named after the “foo fighter” UFOs sighted by Allied pilots during World War II, hinting at Grohl’s longtime affinity for the topic that has compelled humanity since the rise of the modern age of UFOs in the 1940s. The Grohl-directed video features the band playing on the roof of a remote wood cabin under a starry sky with the band members’ eyes glowing as if they might be aliens or starseeds of some kind, while his real-life daughters read a book with the lyrics before they start levitating when what appears to be a fleet of glowing multi-colored UFOs descend from the sky and hover around the band. These majestic visual effects are reproduced with dramatic results in the live setting as the stage lights come alive to reproduce the colored orbs around the band, making it seem like the Foo Fighters are surrounded by Earth’s hipper ET visitors who comprise the galactic neighborhood. Keyboardist Rami Jaffee provides some strong synth work here to help propel the song higher, as does a trio of female backing singers providing what feels like intergalactic harmonies. 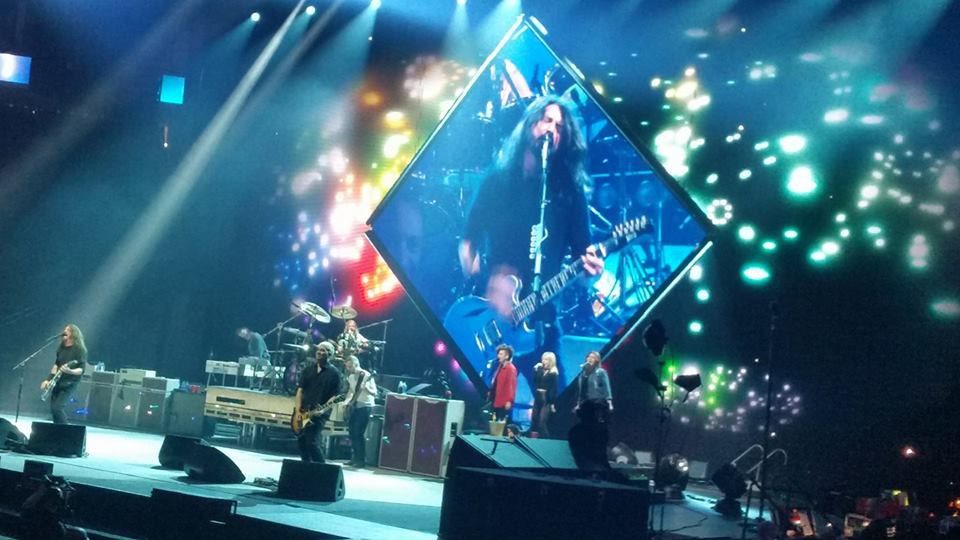 “The Sky Is a Neighborhood” – Photo: Greg M. Schwartz

The hard rocking “Rope” is the first of five tunes featured from 2011’s incendiary Wasting Light that remains one of the decade’s best albums. The jammed out rocker also features drummer Taylor Hawkins and his entire kit rising up on a platform ala Peter Criss from KISS, providing some classic rock theatrics to push the Foos’ arena rock spectacle higher. Taylor follows by providing the lead vocal on the Beatle-esque “Sunday Rain”, revealing a multi-dimensional talent. The infectious “These Days” provides another peak moment from Wasting Light that gets the entire arena rocking, as does the album’s electrifying “White Limo” which finds Grohl rocking out like someone half his age. Grohl’s continuing youthful vigor throughout the night seems to in fact support a recent scientific finding that rocking out and dancing to music can help slow the aging process, with the 48-year-old delivering a charged performance that shames much younger musicians who call it a night after only 90 minutes.

“Times Like These” from 2003’s One by One is arguably the song that propelled the Foo Fighters from mid-level band to arena rock titans (along with the same album’s “All My Life”), and the majestic rocker provides another highlight as Grohl starts out solo acoustic while serenading fans shining their cell phones like high-tech lighters. Grohl even suggests “extra credit” for those who do shine old school flame lighters, as the smokers and puffers in the crowd earn the extra points. A cover of Alice Cooper’s “Under My Wheels” sung by Shiflett is the one moment in the show that fails to ignite, with the oddly selected tune falling a bit flat. It leaves some fans wishing the band would have opted for Foo Fighters deep cut “Wheels” instead, although it’s certainly understandable that Grohl would program a couple of tunes to give his voice a rest in an epic set like this one. Hawkins seizes his opportunity shortly thereafter when he turns the drum kit over to Grohl and sings a crowd-pleasing duet on Queen’s “Under Pressure” with Luke Spiller from opening act The Struts nailing the Freddie Mercury part while Hawkins delivers a most admirable take on David Bowie’s part.

The raucous “Monkey Wrench” turns the clock back to 1997, preceding a cathartic blast from “Best of You” to close the set in high energy fashion. But the Foo Fighters aren’t done yet. The new “Dirty Water” opens a five-song encore sequence with a dynamic and thought provoking tune that features the female backing singers returning to provide majestic harmonies. Is the song referencing deplorable situations like the water crisis in Flint, Michigan where neither Presidents Obama nor Trump have been able to provide solutions, though they each still had no problem approving of insane amounts of federal money for the modernization of nuclear weapons and bloated Department of Defense arms spending?

A deeply heartfelt cover of Tom Petty’s “Breakdown” provides tribute to rock’s most beloved fallen hero of 2017, followed by a rocking workout on “This is a Call”. Another tribute to a recently fallen rock hero follows as the band pays homage to AC/DC’s Malcolm Young with a blistering rendition of “Let There Be Rock” that ignites the Golden Center with rock power at its most visceral. Hawkins and bassist Nate Mendel lay down a mean groove, while Grohl seems possessed by the spirits of both Young and Bon Scott on a song that clearly makes 48-year-old men feel like youths again.

The performance is utterly electrifying on every level as the band cranks out a high voltage blast of classic rock about the birth of rock itself that lives on as one of the genre’s greatest anthems here. It’s also an appropriate band for the Foo Fighters to cover in the sense that AC/DC has been one of the longest running acts in rock without ever experimenting with their sound. The Foos may play around a little more in the studio here and there, such as on the new album that Hawkins has called their most psychedelic. But as with AC/DC, the guitar-driven formula never strays too far. In testament to Sacramento’s status as a true rock ‘n’ roll town, it doesn’t look like anyone in the arena has left even after three hours.

“Everlong” then closes the epic three-hour plus show with Grohl introducing the beloved alt-rock anthem by saying “We never really leave”, suggesting that rock power lives in the hearts and minds of the fans who love the songs and sing along on lyrics like “If everything could ever feel this real forever, If anything could ever be this good again…” There aren’t many bands playing three-hour shows without even a setbreak in 2017, but then there aren’t that many rock warriors like Dave Grohl.