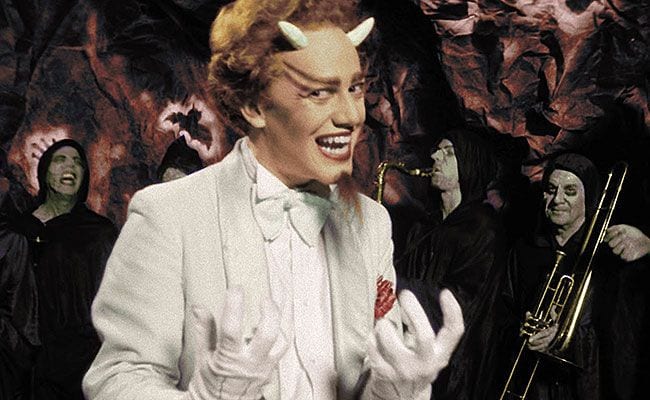 It’s been called the Citizen Kane of underground movies. It’s also been called anti-Semitic, trash, racist, and the launching pad for Danny Elfman’s film scoring career. Of everything listed in the previous sentences only two are true. Which? Read on!

Perhaps the reason that this has been compared to Citizen Kane is in part because it has a rich back story. Director/co-writer Richard Elfman had been performing bits and bobs of this kind of absurdist theatre in and around the Los Angeles area with the group the Mystic Knights of the Oingo Boingo. There were songs, scenes and dancing and someday, someway, he just knew that it had to be made into a film.

This of course was before independent films were championed the way they are today, so Elfman hustled each day to get the financing to make the picture happen. He brought together a cast that included his then-wife Marie-Pascale Elfman, Susan Tyrell and Herve Villechaize. Villechaize was already making a name for himself and was tight with co-writer Matthew Bright. Despite his agent’s attempts to block him from the film he worked like a devil, painting sets and funneling his checks back into the project.

After something like two years of shooting the film was finished and ready for release. And furor. There were bomb threats, reviews from an outraged press, and even some indifference thrown in for good measure. The picture seemed doomed to live in the annals of obscurity but quickly found purchase on the underground scene where countless low-quality VHS copies made the rounds and before you can say meshuggah became a cult sensation.

Describing the plot of the film, and there is one, is the ultimate spoiler as one simply has to experience the film. Ordinarily a statement of the lazy journalist, here it is the statement of an honest one, eager to let the audience allow the film to embrace them like a warm blanket of anti-anxiety meds. Let’s just say that central to the story is the Hercules family and their house which provides entry into another dimension (the sixth one, for those keeping count) wherein a tiny king (Villechaize) and a frightening queen (Tyrell) are surrounded by a cast of the strange including sexpot French (the former Mrs. Elfman), a dancing butler frog, topless dancers, some unruly kids, and the devil himself (Danny Elfman). They all coexist in some kind of love story-cum-comedic nightmare.

It’s a collision of what went down a few years later when Pee Wee Herman got his own television show and when Tim Burton started making films. In some ways, it’s hard to imagine that Burton didn’t see this film or absorb it deep into his psychic landscape, though perhaps he and the Elfman’s simply subscribed to the same brand of popular and unpopular culture growing up. Villechaize is remarkably charismatic on screen, frequently carrying an entire scene with a smile or glance, an actor who, had he been born in a previous time, would have been excellent on the silent screen.

The dance and musical numbers are marvelous to watch and their braininess and execution suggest that low budgets don’t have to be equated with low levels of professionalism. The music is the stuff of the old stage and screen, the classic stage and screen, with musical numbers including a reimagining of “Minnie the Moocher” called “Squeezit the Moocher” and “Yiddishe Charleston” as well as “Alphabet Song”, taken from The Three Stooges. Danny Elfman’s score suggests that his unique compositional style was already in place and that he was more than ready to take over the Mystic Knights when Brother Richard stepped aside.

The animation sequences from John Muto, like so much of the film, still look remarkably ahead of their time and only add to fun that is Forbidden Zone.

Initially issued in black and white this new edition features the color version as well, allowing for a kind of taste test comparison that doesn’t disappoint. First colorized in 2008, many have become accustomed to viewing it in its original form but the colorization adds a whole new level of the surreal and the absurd that has to be experienced to be appreciated.

There is no shortage of extras here, including revealing audio commentary from Elfman and writer/actor Bright, as well as an extensive documentary that takes us deep into the heart of weirdness that is Forbidden Zone, a new video intro by Elfman, a healthy helping of deleted scenes and outtakes as well as the original theatrical trailer. Whereas some bonus rounds are superfluous at best, these really illuminate the experience and Elfman’s passion for this project reveals itself as he takes us through the experience.

Elfman has performed a live version of Forbidden Zone in recent years and the inevitable sequel looms on the horizon. But for now, nothing beats the original in all its expanded glory.

And, yes, you can find the soundtrack lurking about in a format suitable for you.