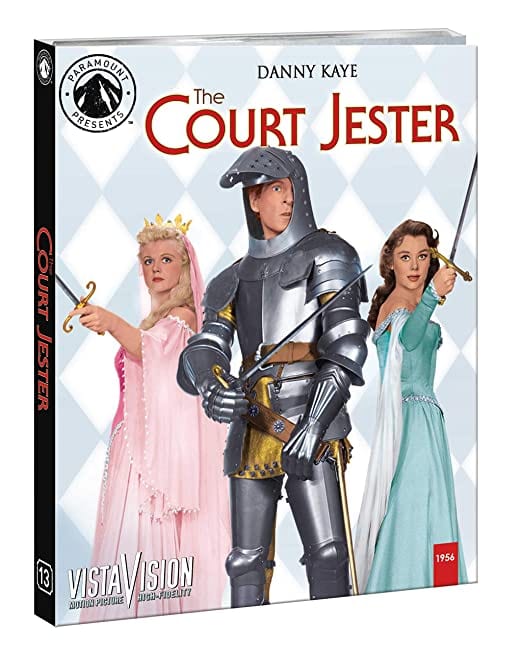 The Court Jester (1956), a just-about-perfect example of a Danny Kaye vehicle, arrives on Blu-ray for the first time in the Paramount Presents line. It’s one of several films written, produced, and directed by the hardy team of Norman Panama and Melvin Frank, who found in Kaye an ideal performer for their tendency to mix verbal and physical humor in fiendishly complex plots.

Set in some never-never-England, the story spoofs Robin Hood and other swashbuckling heroes. As a narrator explains, the throne has been usurped by King Roderick (Cecil Parker) after his right-hand conniving scoundrel, Lord Ravenhurst (Basil Rathbone), caused the royal family to be massacred. But hold! One rightful royal babe has been spirited away to the forest by the dashing and mysterious Black Fox (Edward Ashley).

At first, the viewer thinks Kaye plays the Black Fox because he tells us so in a lively and elaborate scene of musical cavorting surrounded by a troupe of little people billed as Hermine’s Midgets. This activity turns out to be a feint, for Kaye’s character is merely circus acrobat Hubert Hawkins, who longs to prove his manly mettle in a fight for justice.

“Hmm,” says the Black Fox without conviction, and he dismisses the little people with as much condescension. They promise to be available if he changes his mind, and so the comedy establishes that the story will partly be about how seemingly unlikely and non-standard heroes can save the day if given a chance.

Meanwhile, Hubert feels embarrassed to be tasked with proving the baby’s royal lineage to new recruits by flashing “the purple pimpernel”, the royal birthmark on his royal posterior. He feels this duty is more appropriate to a woman; in other words, he feels emasculated. Standing next to him is the bold and beautiful Captain Jean (Glynis Johns), a rebel wench with a peremptory and take-charge attitude.

Here we arrive at a key element in Kaye’s persona. Actually, a literal key is a key McGuffin in the story, and that’s okay for Kaye. Sorry, we’re getting carried away by the screenplay’s wordplay. We’ve essayed to say that in this film and many others, Kaye’s fancy prancing and flowery gestures and rubber-faced mugging and rhythmic delivery may come across, to some viewers, as gayer than Christmas.

Not that there’s anything wrong with that, though as a child I felt disturbed by how far he seemed from a standard manly movie hero. I’m better now. Such subversion of heroic stereotypes is a common quality of comedy heroes, such as Bob Hope’s cowardly persona (which owes much to Frank and Panama) or Jerry Lewis’ nasal man-child. More pertinently, the “unmanly” quality is one Kaye foregrounded and exploited for his whole career.

In an early scene, Hubert and Captain Jean, who’s commanding him, share a bed of hay, and Jean more or less lets her hair down. “I find it hard to believe that the captain could ever be fond of a man who isn’t a fighter,” says he, and she replies, “Sometimes tenderness and kindness can also make a man, a very rare man.” She’d seen him singing a lullaby to the royal babe.

The conversation proceeds smoothly if patronizingly to her own gender non-conformity, aside from her blazing red lipstick. “Why does such a little girl have to do such a big job?” he asks, getting closer.

She answers, “It’s the way I was brought up. My father’s influence made me everything I am,” and he answers, “He does beautiful work.” She goes on to admit that, “in fact, I think he really wanted me to be a boy.”

No sooner are these words out of her mouth than the plot of masquerades and cross-purposes kicks up several notches and begins spinning madly. Thanks to absurd convenience, Hubert inveigles his way into the castle by pretending to be Giacomo (John Carradine), the new Italian court jester hired by Ravenhurst. Giacomo isn’t merely “the gayest and wittiest entertainer in Europe” but secretly “the most skillful, devious, and subtle master of the art of assassination”.

Every convenience is met with an equal and opposite inconvenience until it becomes impossible to tell them apart and pointless to analyze a plot that delights in its own dizzy merriment. A lot of characters die, but the thing feels light as a feather. The comic ingenuity of longtime collaborators Panama and Frank fires on all cylinders here.

One major element arrives in the form of the headstrong Princess Gwendolyn (Angela Lansbury), who bridles at being married off to Sir Griswold (Robert Middleton) for her father’s political benefit, and whose witchy aide Griselda (Mildred Natwick) hypnotizes Hubert-Giacomo to woo the Princess with much vine-swinging derring-do. He falls in and out of Griselda’s spell every time anyone snaps a finger, a brilliantly funny device for Kaye’s lightning changes of attitude.

As we’ve indicated, Kaye’s equally adept with vine-swinging, dancing, and hypnotizing as he is with the tongue-twisting patter that was another of his specialties. This film introduces the catch-phrase (or catch-repartee) of “Get it?” “Got it.” “Good.” Just as famous is the gibberish about “the vessel with the pestle”.

Victor Schoen handled the music, while Sylvia Fine (Kaye’s wife) and Sammy Cahn wrote the songs. Fine and Kaye produced the film through Dena Enterprises, named after their daughter.

As film critic Leonard Maltin states in the introduction, the film cost a then-princely $4 million and looks it. The package describes the film as “beautifully remastered from a 6K film transfer of the original VistaVision negative”. Paramount’s PR material adds that “one of the ‘separation masters’ was also scanned and recombined with the negative scans to address color fading in the negative.”

Of course, Blu-ray players aren’t 6K and even Ultra-HD is only 4K but it’s the thought that counts and the thing does look spectacular. At several moments I came up to the screen and stared at the beautiful grain and rich colors. Surely nothing’s too good for a film that’s been drafted into the National Film Registry, as this has been.