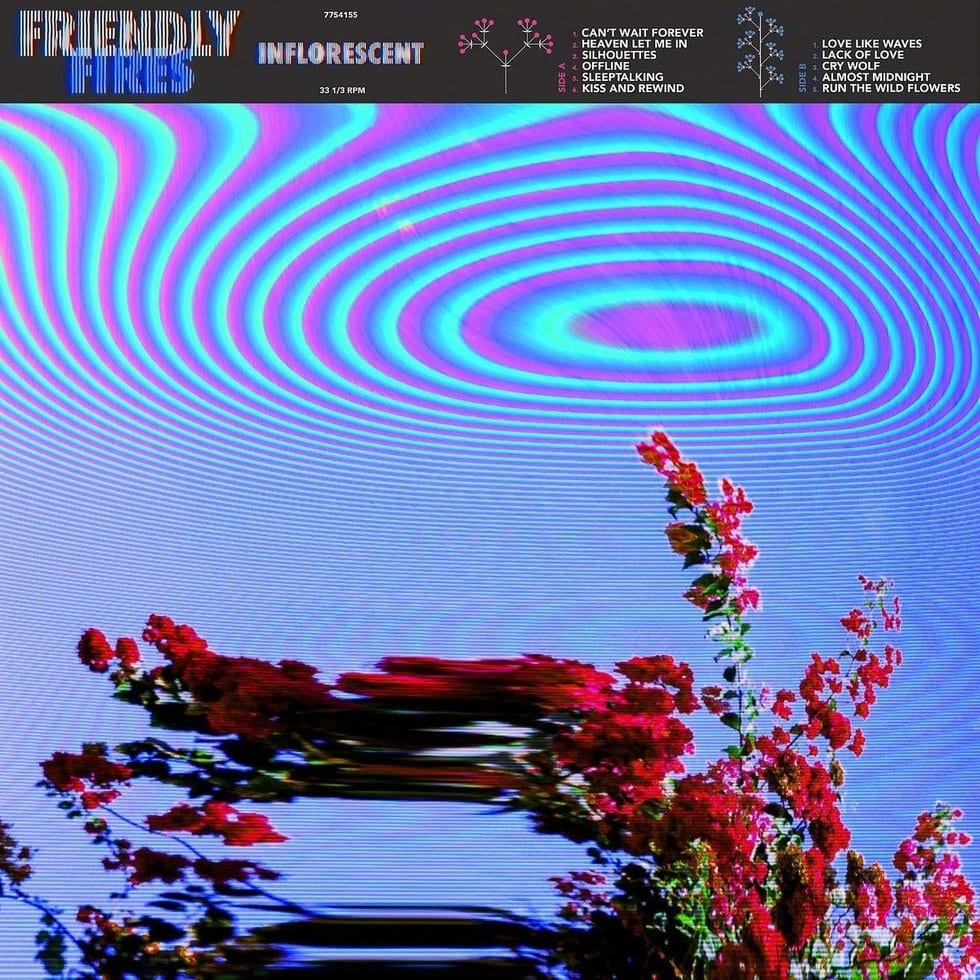 When you research Friendly Fires for articles such as an album review, you discover that lead singer Edward Macfarlane loves to dance. His fans love it too, often pointing his moves out as a highlight of the band’s shows. So, it stands to reason Macfarlane would one day create an album specifically for joyous movement, an album like Inflorescent.

It’s a real shame this album comes at the end of Summer 2019. Executive Producer Mark Ralph brings band’s poppy, vibrant sensibilities to their full blast, resulting in a euphoria people may not necessarily think they deserve, but they certainly need in 2019. The hooks of Clean Bandit mixed with the introspection of Toro Y Moi, Inflorescent leans deeply into the bombastic and bright with instruments cranked to the max for their major keys.

For one thing, the beat never quite dips below 100 BPM, meaning each song moves. Disco, house music, and ska-like horn sections sit well at these tempos, and Macfarlane’s tenor is charming enough to keep them enjoyable even if they’re not especially fresh. Partners like Ralph or Disclosure, who add their hi-hats to lead single “Heaven Let Me In”, ensure the sounds are polished. From there, Friendly Fires inject their infectious charisma, further enhanced by flourishes such as steel drums and disco strings. Where their debut felt like a glossy version of electropunk, Inflorescent takes dance music and four-on-the-floors and smooths their edges for maximum throttle.

The title, a reference to flowers blooming, speaks to the song’s unwavering belief in the self as a means of positive change. On “Heaven Let Me In”, the rising notes of the chorus deliver not a request but a demand, one strengthened by Marfarlane’s “decision to free my soul”. Guilty consciences predate even Catholic confession, but Inflorescent relays the message that whatever sins you’ve caused, you also possess the means with which to rectify them.

In doing so, the album turns troublesome situations into something more palatable. Add a few non-lexical vocals like ba da bops to existential thoughts (“Can’t Wait Forever”) or the vestiges of a concluding relationship (“Silhouettes”, “Run the Wild Flowers”) and everything appears much easier. The frantic nature of Inflorescent allows for distraction from less-than-pleasant subjects, but you also get the sense you’re charging forward towards something better. “Dancing in the fadeout” is as strong an argument for afterglow as any other, and shimmering guitar riffs only bolsters its points.

It’s in these revelations where the album wants you to thrive. The ebb and flow of romance provide a thrill on “Love Like Waves” while logging off becomes a personal victory on “Offline”. Though the lessons here are not rocket science, they’re also not always easy to come around to. The dream of romantic love or the threat of FOMO hold sway over many people. Inflorescent more than acknowledges such concepts. It accepts them: “I know that I’m fine with the things that I can’t control.”

Inflorescent wears its heart on its sleeve in the hopes listeners find it as therapeutic as the band does. In a way, it adds to the album’s charm. Coolness isn’t in endless supply for most people, and embracing uncool qualities may just be the way to invert their appeal. “Maybe I’m dramatic, but dramatic’s what I’m like”: honesty is always the best policy.