It’s All Hallows Eve in the San Francisco Bay Area, although the calendar seems unusually light at first glance when scouting for musical entertainment to celebrate the occasion. But then there’s the discovery that indie rockers Fruition will be launching their fall tour with a Halloween show at the Mystic Theater in historic downtown Petaluma. One of the North Bay’s longest-running venues, the former movie theatre about 35 miles north of San Francisco in Sonoma County has come up big with arguably the most appealing Halloween show in the region.

Fruition have been due for a Bay Area show in 2019 and to get it for a holiday like this seems like an auspicious occasion, especially since the show was in a bit of doubt earlier in the week due to the blackouts inflicted on Northern California by the foul company known as PG&E. But the power has been back for two days after a three-night blackout across most of Sonoma and Marin County and the Mystic Theater is ready to rock.

Some Northern California music fans have gotten to know Fruition from recent summer appearances at the High Sierra Music Festival, where the band played in both 2017 and 2018. Fruition are not really a jam band per se like many of the acts that play the festival, but the band that started out as sidewalk buskers in Portland, Oregon has shown some talent for improv as well as trading guest appearances with other artists at festivals. Singer/mandolin player Mimi Naja made a deep impression at the 2017 High Sierra Festival’s “Heavy Metal Hoedown” set when she stood in for the late great Chris Cornell to deliver smashing renditions of Soundgarden’s “Outshined” and Audioslave’s “I Am the Highway“. 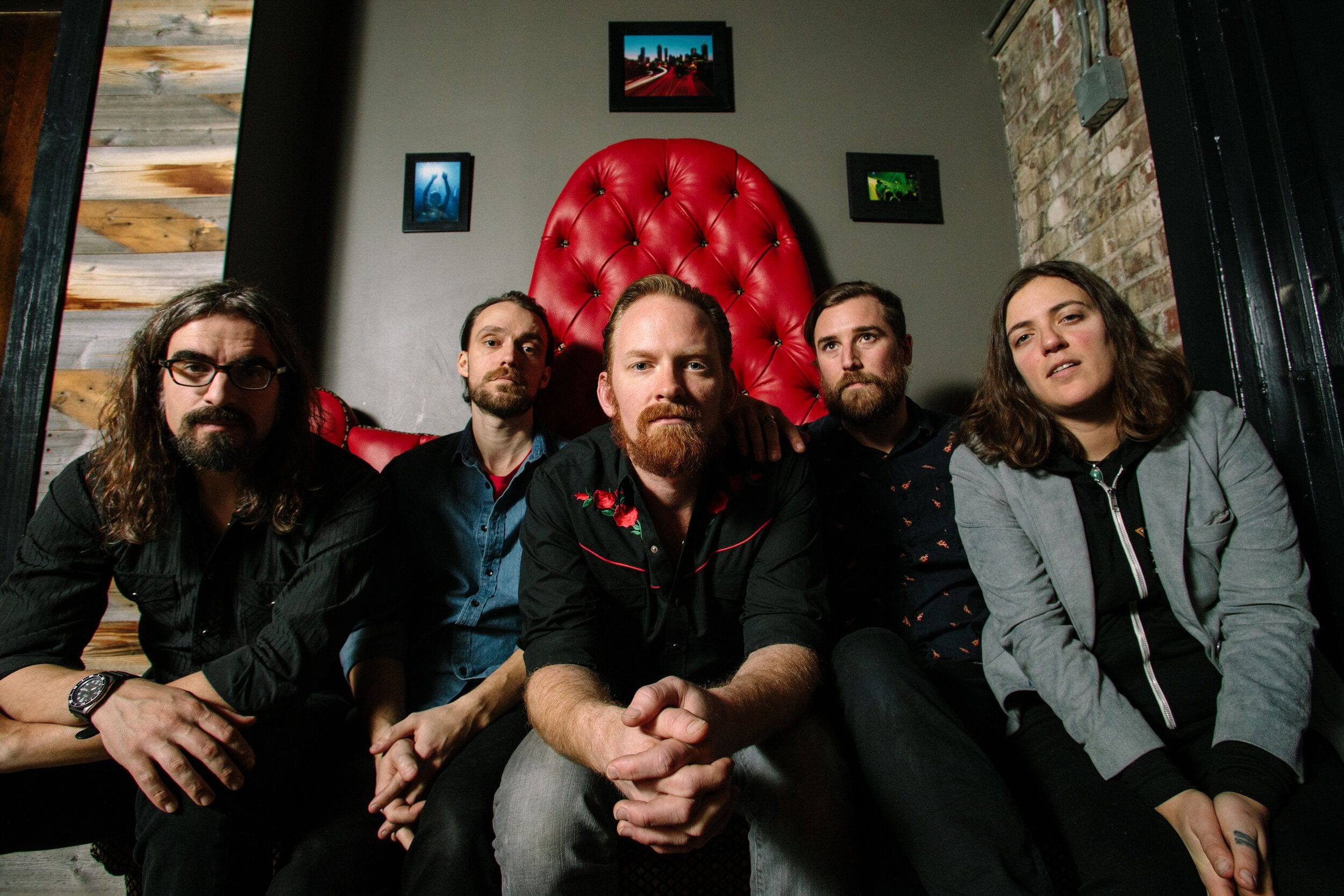 Bear Market Riot from the California Central Coast region open the show and the “power-folk Americana” duo deliver an entertaining set of adventurous tales with melodic layers and strong harmonies. Their wacky horse and unicorn costumes add some extra seasonal flair as the audience gets in the mood for the main event.

From the moment Fruition hit the stage, it’s clear that they’re taking the Halloween holiday seriously with their black light makeup costumes that make the band look like a dazzling cross between zombies and Mexican Day of the Dead sugar skulls. “Santa Fe” from the band’s 2016 album Labor of Love is an early highlight, with Naja’s smooth voice shining on a bluesy melodic gem about moving to Santa Fe’s “land of enchantment” someday. Guitarist/vocalist Jay Cobb Anderson introduces “Dirty Thieves” as a lament inspired by the band’s van getting broken into on a prior visit to San Francisco’s Mission neighborhood, but the song from 2018’s Fire EP is a cathartic number that uses music to transcend anger.

The title track from Labor of Love finds Anderson fronting the band on a bluegrassy number that features a hot jam with Naja crushing a fiery mandolin solo, followed by Anderson ripping on guitar as the band’s jam factor starts to come out. Bassist Jeff Leonard, drummer Tyler Thompson and keyboardist Kellen Asebroek all shine as a unit here, with Fruition gelling as a seasoned quintet. The jam factor continues to coalesce on “Boil Over” from 2013’s Just One of Those Nights for a smoking bluegrassy jam that rocks the house to conjure hoots and hollers. Fruition is cooking now as they move into the dynamic “Snapdragon”, where Thompson lays down a tight beat with Anderson and Naja trading verses over a sparse sonic landscape in compelling fashion. They sing of “reaching for the sky” and the song strikes a chord with the audience, leading Naja to comment, “That’s a pretty new one, you guys seemed to like it more than anyone, so thank you.”

Maybe it’s the Halloween libations from the local Henhouse Brewing in Santa Rosa kicking in, but Fruition is stepping up their game too and the Mystic Theater audience is all in for it. Anderson introduces “Driving into the Storm” as “another new one”, a simmering bluesy rocker that keeps the energy flowing as the set continues to pick up steam. The band rocks out with a raucous vibe recalling Bob Dylan’s “Maggie’s Farm” on “Lay Down Blues” from 2015’s Holehearted Fools EP, with Naja’s impassioned vocals about how “the night time is the right time” helping the quintet continue to stir up an energetic dance party.

The band gets into another crowd-pleasing groove with “Stuck on You”, featuring some hot guitar work from Anderson. Another bluesy highlight occurs with a cover of Robert Johnson’s “Me and the Devil”, which Anderson says is their Halloweeny song that they’re going to make creepier than the original. He lays down some dirty riffage, with Naja adding some mystical mandolin as they build a mesmerizing jam featuring a deep organ solo from Asebroek and Naja plinking some artful blues riffs. Naja’s blues power continues to shine on “I Should Be on Top of the World”, a ballad from 2018’s Watching it All Fall Apart album. She sounds a bit like a young Susan Tedeschi here as she laments a failed relationship, singing of how she’s “been on a bender ’cause she don’t love me tender…”

Anderson introduces 2018’s “Fire” as not really being about the wildfires that have plagued the west coast in recent years (though some of the sales were in fact donated to relief funds for victims of California wildfires), but relating more to America’s gunfire problems. The song ingeniously seems to tap into some of the jamgrassy vibe of Dave Alvin’s 2009 modern day classic “California’s Burning” though, with Fruition delivering one of the night’s most energetic jams that sees the ladies on the dance floor really getting down.

“You guys sure have been a great audience, we’re gonna leave you with a positive number,” Anderson says to introduce “The Meaning”. The song starts off as a slow simmer with Asebroek singing of how he’s not seeking salvation, isn’t too worried about damnation, will eventually return to stardust but just wants to get close to the one he loves while they’re still both around. The band builds the song with skillful sonic layers until they reach an uplifting groove where Naja lays down some great mandolin lines as they jam to a climactic conclusion.

The encore features one of the most moving songs of the night as Naja leads the band on the gritty blues rocker “I Don’t Mind”, with Anderson adding hot bluesy fills behind her. “I just keep moving, I might be losing, but I don’t mind,” Naja sings in defiance of whatever curveballs life might throw. Leonard throws down a mean low end here as he and Thompson conjure a fierce groove that the band takes for a great ride to end the night on a cathartic high note. The show has featured some strong new material released as singles, although nothing from their new album Wild as the Night. It’s sure to be another solid effort though, what with how the band has been on a steady ascension throughout the past decade.

“For me, I’ve just always hoped that people relate to the music, whether it’s a certain chord movement that lifts their spirit or comforts their sorrow, or a lyric that speaks to them like it was written for them,” Asebroek says in publicity materials for the album. “This music comes from places of vulnerability and I hope people can take their guard down a little while resonating with it.”

Tonight’s show has been filled with moments where spirits were indeed lifted by certain chord movements and lyrics that resonate with the soul, so Fruition is most definitely accomplishing their creative goal at a time when America needs that comforting as much as ever.