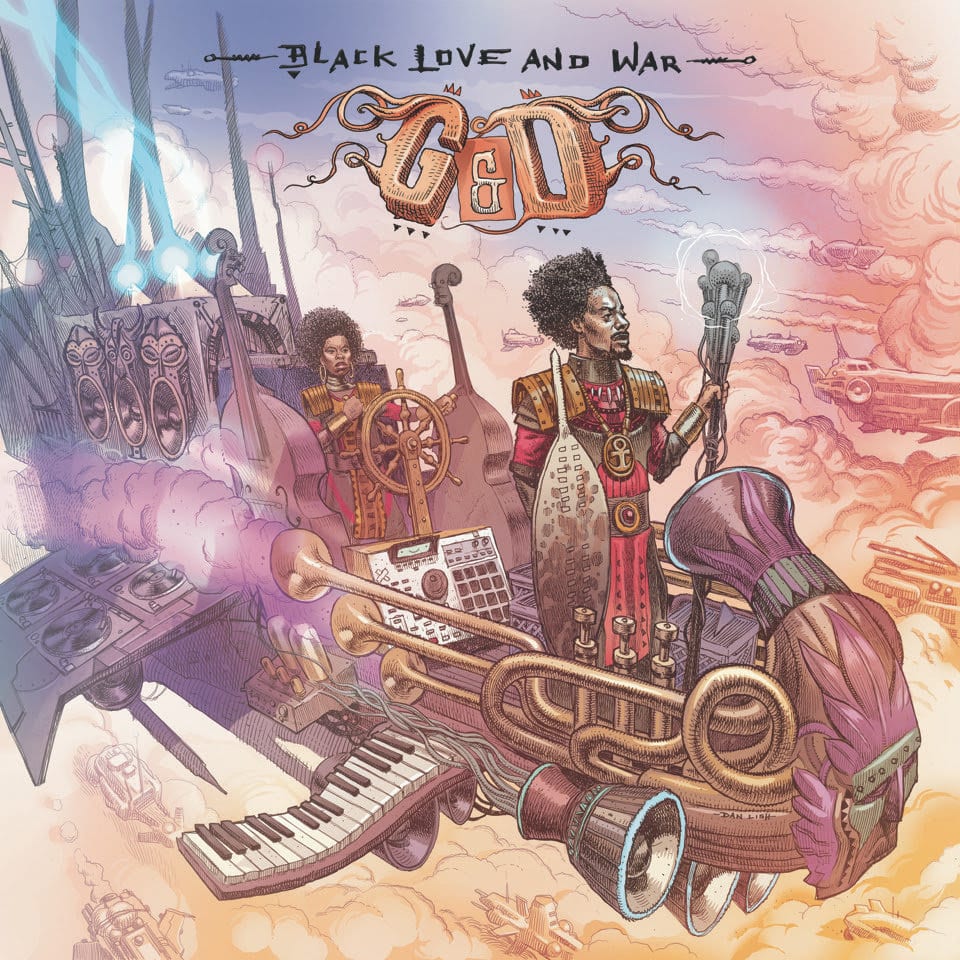 Context, for those reading in the here-and-now of 2019, but mostly for those who might happen to be reading this decades from now: this has been an ugly week in the United States. The US president has been rage-Tweeting while traveling back and forth to photo ops in hospitals where mass shooting victims, many killed because of their race, are recuperating. Meanwhile, an idiot news pundit has been blathering that white nationalism isn’t that big of a problem in the USA. A bigot in a bathing suit harassed a Muslim woman at an amusement park that is primarily for preschool children.

This is also the week that G&D have released their new album, Black Love & War.

G&D is Georgia Anne Muldrow and Dudley Perkins (aka Declaime). Muldrow and Perkins each work as prolific solo artists in addition to being G&D, and they are life partners with children as well. Muldrow’s and Perkins’ personal and professional experiences have been poured into Black Love & War. The album hits universal chords while specifically chronicling both the struggles and rewards of existing as an African American family in the 21st-century United States.

After a deceptively silly intro skit, Black Love & War opens in earnest with a statement of purpose “Where I’m From”. The song introduces the musical mix of 1970s funk and 1990s West Coast rap that forms the foundation of the couple’s sound, which they describe as “fOnk”, with a capital ‘O’. While borrowing from old styles, Muldrow, the album’s primary producer, gives the album enough of a contemporary edge to remind listeners that the lyrical concerns are present-tense issues.

As the album title suggests, war and love weigh heavily on the minds of G&D. “Peace Peace” sets the war tone. “Welcome to the world son, now run, police got a gun,” raps Perkins, further noting that “the world has grown so wicked”. His description grows ever more apocalyptic until Muldrow chimes in, singing “best believe it’s a fight, gotta treat people right”. Just a few songs later, in “The Battle”, Perkins elaborates: “Whole world is on the attack, whole lotta whites hate blacks / And most for no damn reason, this is the season to shoot another dead / Last night, they shot a baby black boy in the head.”

While detailing the external battle, G&D also acknowledge that inner battles need to be fought as well, with Muldrow advising, “Don’t let misery win over your mind”. G&D also connect the past to present with two short pieces, “187” and “Slave Revolt Soundtrack”, providing necessarily uncomfortable context for their commentary on our present-day ugliness.

Gradually, the album begins to focus on the love side of its title’s equation, winding down with an engaging set of songs that celebrate romance and family. The struggles detailed earlier in the album are never fully forgotten, but the transcendent value of love and family can help provide the strength to keep trying to move forward.

The album ends with another father/son song, but instead of the dire warnings of “Peace Peace”, “Big Mel” is a tribute to Perkins’ late father. If you have had a good relationship with a father who has died, this one will hit you hard, no matter who you are. Perkins provides relatable details about his dad: “Used to be a tough dude / Sometimes hard to deal with / Like most people are / But I knew under all that heavy father stuff / There was a real cool funny guy / Who loved us all dearly.” “Big Mel” is a refreshing addition to the canon of songs about good dads in a world where we’re more like to hear about “Papa Was a Rolling Stone” dads and “Cats in the Cradle” dads.