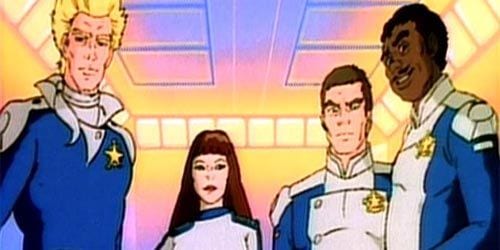 Normally, I only frequent Wikipedia in search of strange, obscure background information on a given subject (turns out Teenage Mutant Ninja Turtles was retitled Teenage Mutant Hero Turtles in the United Kingdom; and would you believe The Garbage Pail Kids Movie was a financial disappointment?) But in the case of The Adventures of the Galaxy Rangers: Volume 1, Wikipedia served not as a source of trivia but instead as a makeshift Babelfish, without which I’d have never managed to even decipher the show’s plot.

I feel like something of a Geek Without A Country where The Adventures of the Galaxy Rangers is concerned; for all my cartoon-obsessed, nerdcore leanings, I don’t boast the requisite nostalgia to overlook the inherent batshit craziness and somehow almost inspired stupidity of a given 1980s cartoon, and in this case, I am seeing the cartoon in question for the first time; I had never even heard of The Adventures of the Galaxy Rangers until 2008. How it escaped my notice in my TV-obsessed ’80s youth I can’t understand, but I am happy for an opportunity to judge an ’80s relic on its own merits; this might well be the only truly objective ’80s cartoon review ever penned by a member of Generation X.

What first strikes the novice viewer, before the stirring Galaxy Rangers opening theme has come close to conclusion, is the curious fact that no attempt is made to account for the show’s frankly inexplicable Old West theme. The theme song’s obligatory Expository Voiceover offers the following succinct summary of the show’s central premise:

In 2086, two peaceful aliens journeyed to Earth, seeking our help. In return, they gave us the plans for our first hyper drive, allowing mankind to open the doors to the stars!

We had assembled a team of unique individuals to protect Earth and our allies. Courageous pioneers committed to the highest ideals of justice, and dedicated to preserving law and order across the new frontier. These are The Adventures of the Galaxy Rangers!

Am I out of line in suggesting that, somewhere in this proudest of introductory speeches, the narrator might have added something along the lines of, “Also, they’re robotic-looking cowboys! For some reason!”

Admittedly, they’re called Rangers, which evokes images of, say, Texas Rangers. But the mixture of the science fiction and western genres was immediately understood to be at the core of not only Joss Whedon’s Firefly, but also another animated space western from the same era as Galaxy Rangers: Marshall Bravestarr. (Bloody hell, some hasty research reveals that there was yet a third cowboys-in-space cartoon in the 1980s: Saber Rider and the Star Sheriffs; I don’t know whether I’m more disturbed at the unsuspected popularity of such an unlikely genre, or by the uncomfortable realization that there were two cartoons I somehow managed to overlook during my ‘toon-crazed childhood.)

I can’t quite express how unexpected and off-putting this all is, but I came to grips, not five minutes into the first episode, with a far more surprising revelation: I was fixating on this one relatively minor and forgivable misstep because to broaden my gaze in the least would mean that I’d be forced to acknowledge that, flawed and silly as you might rightfully expect it to be, The Adventures of the Galaxy Rangers is better than all of its fondly remembered animated peers by a staggering and comical margin.

Keep in mind, I had already made this sad concession during the opening scene of the pilot episode, which stars in part a creepy, ostensibly endearing character named Zozo, of the species Kiwi, who looks for all the world like a violet Dobby with a bad brunette wig and unsettling, lidless orange orbs for eyes. I suspect he is meant to be this universe’s Orko; meaning he’s the cute, silly mascot type meant to appeal to the youngest members of the audience.

Perhaps only a fellow child of the ’80s can grasp the full implication of what I am conveying here, but I shall repeat it: During a scene starring this series’ version of bloody Orko, I had no choice but to admit to myself that The Adventures of the Galaxy Rangers was far superior to such Monteland stalwarts as He-Man and the Masters of The Universe, G.I. Joe, The Transformers…

This, for you layfolk, is a discovery of no small scale.

The Adventures of the Galaxy Rangers boasts animation that occasionally falters but generally would not look out of place, quality-wise, in the afternoon cartoon lineups of 2008; The Transformers can make no such claim. Galaxy Rangers is scripted in such a way that its characters are not interchangeable ciphers, with gimmickry standing in place of characterization; the same cannot be said of Masters of the Universe. Finally, Galaxy Rangers is so ambitious and self-assured that, unlike G.I. Joe, it comes across as an actual serial narrative, rather than a series of extended toy commercials. (I nearly added that, to be fair, Galaxy Rangers never had a toyline to support. But lo and behold…)

While Zozo is an obvious contender for Most Surreal Character, also worth mentioning is Captain Kidd, a fairly stereotypical pirate villain who is predictably obsessed with obtaining booty (ahem), and who just happens to have the head of a deformed bird. Oh, and in lieu of a parrot, Captain Kidd’s shoulder plays host to a maddeningly whimsical Monchhichi-looking monkey-creature. (Also of note: psychic Ranger Niki? Hot.)

And now, behold the following excerpt from Wikipedia’s entry on the series: “The Series-5 Brain Implant is perhaps the closest mankind will ever get to reproducing with cybernetics the abilities that gene engineers can draw out of the human genome. The S5 implant enables dramatic boosting of innate abilities due to its unique conversion of bio-electrical power generated by alpha radiation and stored within the badges worn by the Galaxy Rangers.”

Pretty heady stuff, considering it’s from the same era wherein Prince Adam would hold up a sword and shout “By the power of Greyskull!” to turn into He-Man.

Admittedly, some of the dialogue is pretty silly (“Their life force will be mine, ha ha ha!”), but as someone who recently caught a vintage G.I. Joe adventure wherein the heroes destroyed Cobra’s doomsday device by yodeling, I can assure you that even at its cheesiest, The Adventures of the Galaxy Rangers is more intriguing and moody and credible than any of its ’80s-era competition.

So how, one can’t help but wonder, did the show fail to find an audience? Was it too ambitious, perhaps, for the minimal standards of the time? Or simply too dark? (There are deaths in this series, and in the ’80s, deaths were largely a no-no in children’s fare.) Was it too cerebral? (I say again: I required Wikipedia’s help just to navigate the plot strands and to remember all the various species aligned with the League of Planets.) Was something like The Thundercats really so much simpler and, well, stupider than The Adventures of the Galaxy Rangers? Or are kids simply more skilled at accepting such strangeness at face value, unlike floundering old fools like myself?

Of course, even an unusually daring and artful children’s cartoon from two decades ago is still a children’s cartoon from two decades ago; among other distracting and tiresome shortcomings, the voice acting in The Adventures of the Galaxy Rangers is awkward and inconsistent, at best. Perhaps this stems from the fact that its animation was produced principally overseas; Batman and his antagonists in Japan’s recent Gotham Knight anthology suffered from similarly stilted speeches and banter. In the case of Galaxy Rangers, though, it’s all the more disappointing because the dialogue, while sometimes stiff as noted above, is at other times unusually self-aware and cynical, often playfully undermining the show’s dramatic action sequences.

Queen of the Crown: Have you any idea what’s going to happen to you, Captain?

Episodes are as hit-and-miss as you might expect. A clear highlight is “One Million Emotions”, wherein the Galaxy Rangers attend a galactic art exhibit, where an item called a Sensation Doll is promptly stolen by some smuggler types. The episode begins with a fun throwaway gag, as Niko points out a landscape painting to fellow Ranger Walter and explains that it’s from Nebraska, to which he responds, “The planet, or the state?”

But this cute joke aside, “One Million Emotions” isn’t funny, but rather provocative. The Sensation Doll, for example, is likened more than once to an “emotional electric chair”; created by creatures called “The Poe Mutants” (or as Ranger Shane Gooseman calls them, “The Edgar Allan Poe Mutants”), the Sensation Doll is, “A storage battery; it holds one million emotions: a hundred-thousand kinds of fear, a quarter-million varieties of anger, jealousy, love. One touch, and…”

In an early scene, a character is forced to touch the Sensation Doll (which looks like a nasty something that some unfortunate character might cough up in a Cronenberg film), and his resulting scream is legitimately unsettling. (One of the villains behind the theft of the Sensation Doll goes by the memorable moniker of Jackie Subtract. Just one of many cooler-than-one-would-expect little details littered throughout the series.)

And then there’s “Psychocrypt”, a bad acid trip of an episode in which Zachary Foxx is haunted by hallucinatory nightmares about his comatose wife, Eliza. (Saving her life is Foxx’s motivation for the show’s every adventure, incidentally. Perhaps I should have mentioned that sooner. I blame my Babelfish.)

Distraught, he goes rogue and plays the role of the lone vigilante, going so far as to resign from the Rangers when his teammates and the powers that be refuse to approve his decision to get proactive with the cruel and manipulative Queen of the Crown. It might not surprise you that Foxx’s fellow Rangers in fact help to make his unauthorized mission come to pass, but the episode’s driven, furious, sometimes subversive tone is quite surprising, indeed.

Ultimately, while I cannot praise The Adventures of the Galaxy Rangers enough in the context of children’s animated fare of the ’80s (I’m particularly struck by the show’s use of primitive but then-groundbreaking CGI), I still found my attention drifting whenever I tempted to sit through a given episode. Much like a child, I’d only perk up when Shane Gooseman or Zachary Foxx would invite a theme song onslaught (“No guts, no glory!”) by activating their bionic implants. (Sounds kinky, when you just come right out and say it like that.) And for all its innovations, the show could also be derivative (a scene from “Phoenix” involving lightsabers comes to mind.)

But flawed as The Adventures of the Galaxy Rangers might have been, its nearly recklessly inventive creators had plenty in the way of guts; it seems unfair that their creation was denied its proper glory.