It’s nearly all Bob Dylan’s fault. Well, him and the Searchers really. Bob bought the folk influence, and the Searchers bought the jangle and loads of people thought that it would be a great idea to stick those things together. And it was. Without that formula, there’d be no Byrds, huge holes in the Beatles’ repertoire and R.E.M. would probably still be playing frat parties in Athens, Georgia for beer and sandwiches. In 2018, you probably think you don’t really need a three-CD collection of oddball, British one hit/no hit wonders Rickenbackering away in a whimsical and windswept fashion. But you do. Really, you do.

In their tireless quest to chronicle the dusty side streets of rock and roll, Cherry Red Records have kindly scooped up almost 80 prime examples of folky pop and released them as Gathered From Coincidence: The British Folk-Pop Sound of 1965-66. Some names you’ll know, some names might ring a bell, but most of them will leave you scratching your head, or occasionally have you making obscure Google searches. It’s not all gold dust and diamonds, but quite a lot of it is.

The set is helpfully carved up three ways: “In the Jingle Jangle Morning” compiles all the people who really wanted to be the Byrds – harmonies and 12-string guitars are the order of the day and “Feel a Whole Lot Better” is re-written on many occasions, but it’s great fun. “Too Many Protest Singers, Not Enough Protest Songs” (a surprisingly contemporary reference) showcases the polite voice of genteel British dissent and disc three, “Gather Round, All You Clowns” scoops up the remainder. The liner notes – all 44 pages of them – provide all the background information you’ll ever need and do exactly what they need to do by helping you listen to the tunes with an inquiring mind. Take a bow, David Wells.

It’s a quietly star-studded collection, with the Searchers, Marc Bolan, the Kinks, the Pretty Things and even Olivia Newton-John getting in on the act. As with most of these compilations, it’s the left-field stuff that catches the attention with tracks like “Now the Sun Has Gone” by the Beatmen screaming “lost classic” above the jangling. We all could live long and happy lives without hearing “It’s Good News Week” by Hedgehoppers Anonymous ever again, but it’s here to add a little context. “The Protest Singer” by Micha, however, is just plain dreadful.

There are some charming signposts to the future here too – the Ugly’s “Wake Up My Mind” lurches from time signature to time signature in a very “Barrett era Floyd” fashion, and many of the tunes have all the hallmarks of the earnest singer-songwriter style which soundtracked many a middle-class soiree in the early 1970s. Bizarrely, tucked away as the last tune on disc three (and undocumented in the otherwise expansive liner notes) is Tony Hatch’s theme from “Crossroads” – a UK based soap opera, famous for wooden acting and cardboard sets. Very peculiar.

As a document of a period, Gathered From Coincidence is unique and definitive. It’s also surprisingly listenable. The period between Merseybeat conquering the world and 1967 throwing its long shadow over the rest of the 1960s is not particularly well documented and this collection does much to rectify that. If you’re a fan of the Paisley Underground bands of the early to mid-1980s, then you really need to grab this with both hands and play “spot the influence” for days. And like me, if you thought John Otway wrote “Cheryl’s Going Home”, this set will open and possibly blow your mind.

Here’s the deal: if you have any interest in rock and pop history, a 1960s aficionado or just someone who likes a good tune,Gathered From Coincidence is a charming way to spend an hour or two. Crank up the Dansette, immerse yourself in the liner notes and pretend the outside world, is hip, groovy and black and white. We were so much older then. We’re younger than that now. 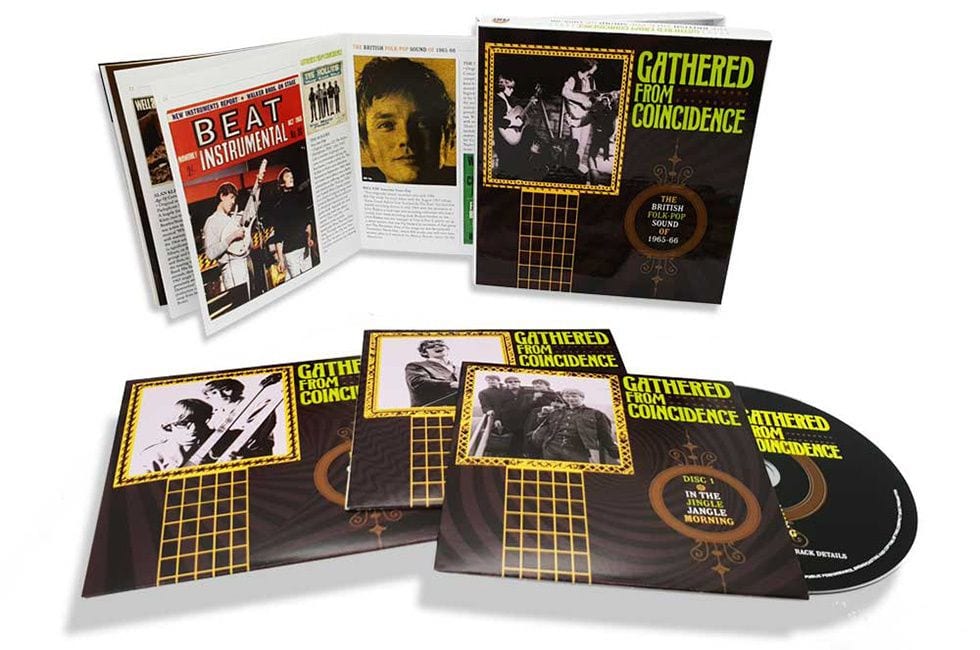