“And now… After more than 25 years in the making… And unmaking…” is the humorous quip from director Terry Gilliam at the beginning of The Man Who Killed Don Quixote (2019). The filmmaker’s eventual success of bringing Miguel de Cervantes’ Don Quixote (1605) to the screen, however, meets with a sadness. The novel Orson Welles failed to adapt, followed by Gilliam’s own thwarted attempts, well recorded in the documentary Lost in La Mancha (Fulton and Pepe, 2002), had created a captivating tale in cinema of the unfilmable novel. But just as every story must have an ending, so the hunt for this white whale is now over.

In
The Man Who Killed Don Quixote, cynical advertising director Toby (Adam Driver) is frustrated with his Quixote advertisement. He heads off to search of the small village where, as an idealistic young filmmaker, he shot his student film. He learns that the humble old shoemaker (Jonathan Pryce), whom he cast as the titular character of Cervantes’ novel, still believes that he is the chivalric knight. Caught up in the older man’s comic and surreal adventures, Toby must confront how his film changed a small Spanish village and its people forever.

In as much as Quixote reimagined his reality, so the film itself is a reimagining of the novel. If adapting a literary work requires the filmmakers to discover the essence of the source material, adapting the spirit of the story and the characters, then Cervantes’ novel remains unfilmable.

The question that will confront
The Man Who Killed Don Quixote is whether it honours this spiritual truth. The film will likely convey a different meaning to the literary text, not because Gilliam forgoes emphasising the hero’s chivalric quest, but because such a code belongs to the past. The concept of the heroic resonates differently today, more synonymous with the superhero blockbusters, albeit Quixote’s donning the attire of a knight is a forerunner to these superheroes in spandex and capes.

Storytelling is about choice, and instead of pursuing an adversarial comparison, considering the novel and film side by side can allow the interpretations of the idea to complement one another. Whereas Quixote implicates Sancho in his adventure in the book, here it is Toby who transforms the man into dreamer knight. And while Quixote is a prisoner within his imagination, Sancho/Toby has one foot in reality, the other in fantasy, as he struggles to realise his creative vision for a corporate project. This juxtaposition of one man isolated from his reality versus another struggling to create explores the separation of fantasy and reality in an alternative and nuanced way to Cervantes’ work. Is Toby a filmmaker turned advertising director, or just another dreamer, not unlike Quixote? 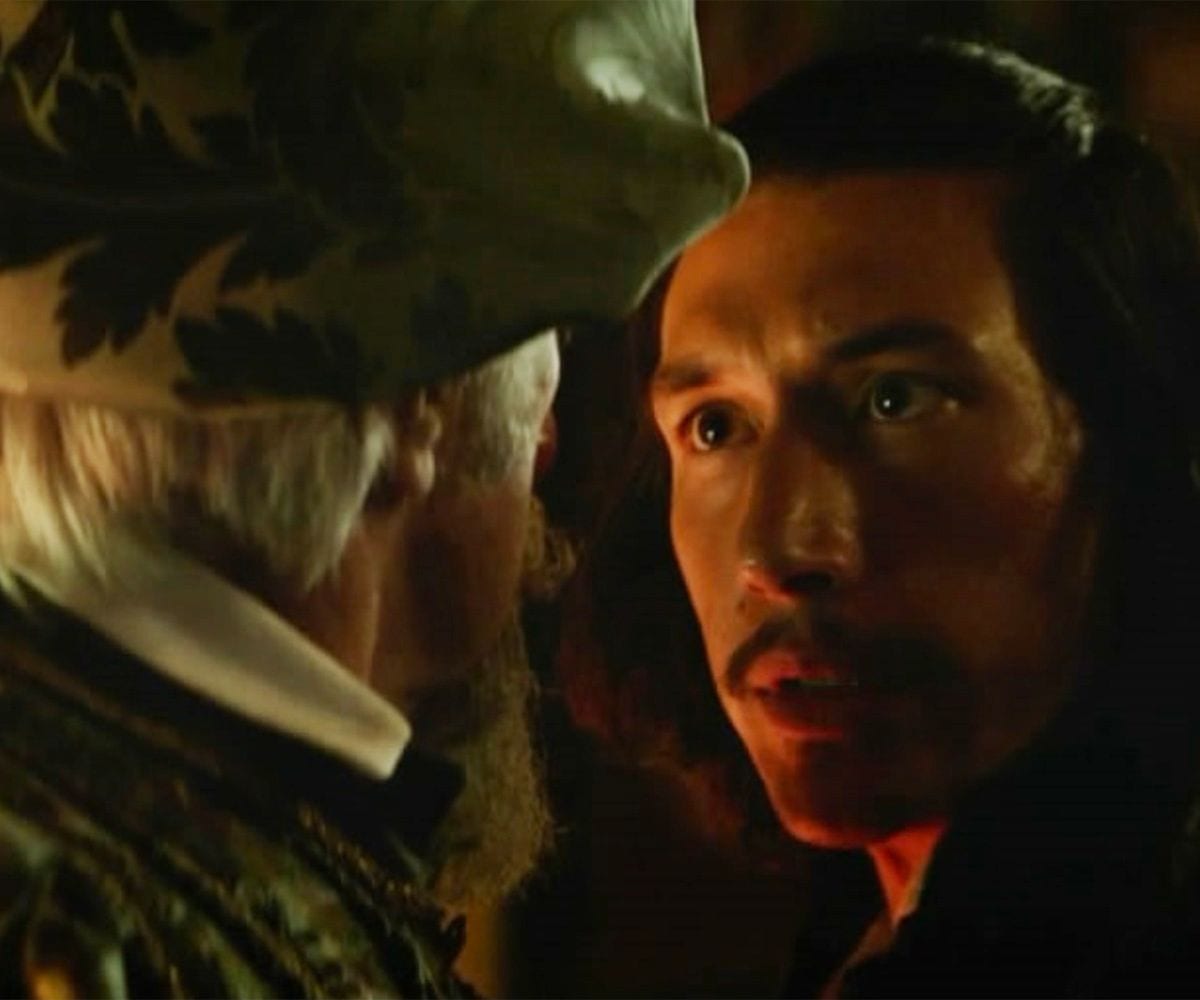 Good storytelling is often launched from possibility; ‘what if?’ And here Gilliam explores this concept through his act of reimagining. It’s not unfaithful to Cervantes’ choices. Indeed, The Man Who Killed Don Quixote respects the novel’s singular originality. Exploring ‘what if?’ is a part of the act of imagining, of telling a story. Viewers suspend their disbelief and revel in the possibility. It’s therefore fitting that Gilliam reimagines Cervantes’ tale by asking this question, thereby complementing the original story. Meanwhile, this approach stays true to his cinema of vivid imagination, in which fantasy and reality overlap. Gilliam is an auteur that revels in the ‘what if?’

From the prose of Cervantes that requires us to imagine to the image and sound of Gilliam that presents us with the tale in the visual medium of film, the latter faces challenges that makes conjuring the movement between fantasy and reality more complicated. The cinema has to look believable, while literature still has to create a believability; the conjuring of the world in the reader’s imagination gives the tale flexibility that cinema is not afforded. Any literal adaptation of Cervantes’ world, an ambitious work of imagination, themes and ideas, would struggle to overcome the restrictions of cinematic storytelling, but it’s here that we can discover just how magical and manipulative cinema can be.

The Man Who Killed Don Quixote exposes our susceptibility to suspending our disbelief, fully immersing ourselves in the drama to the point that in a couple of scenes, we lose touch with the distinction between reality and fantasy. While for much of the film Quixote’s fantasy versus Toby/Sancho’s perception of reality creates comedy, Gilliam effectively sets up a couple of scenarios where we, like Toby, can lose ourselves. Not unlike Quixote, when our suspension of disbelief is pierced, we realise our silliness or gullibility. Yet even if we feel a little embarrassed, the pleasure of cinema and storytelling is the feeling of having been manipulated through its deceptive nature, or the mischievous intent of the filmmaker.

There’s a dark underbelly to the pursuit of dreams that are not lost on Gilliam. Angelica (Joana Ribeiro), the young village woman who starred in Toby’s film and chased his dream to Madrid, in the words of her father became a “whore”. Toby is surprised to learn of her transformation from what he remembers as a “sweet girl” who played a wonderful part. But he, too, has transformed from the person he was then, his journey in search of the past reveals a less narcissistic version of himself. Gilliam frames the storytelling process, and its effect on characters and viewers as a transformative one.

Comments from Gilliam in the promotion of the film mar his eventual success, and also reframe Angelica’s fate. In an interview with The Independent, he commented on the Harvey Weinstein trial saying, “…There are many victims in Harvey’s life, and I feel sympathy for them, but then, Hollywood is full of very ambitious people who are adults and they make choices.” 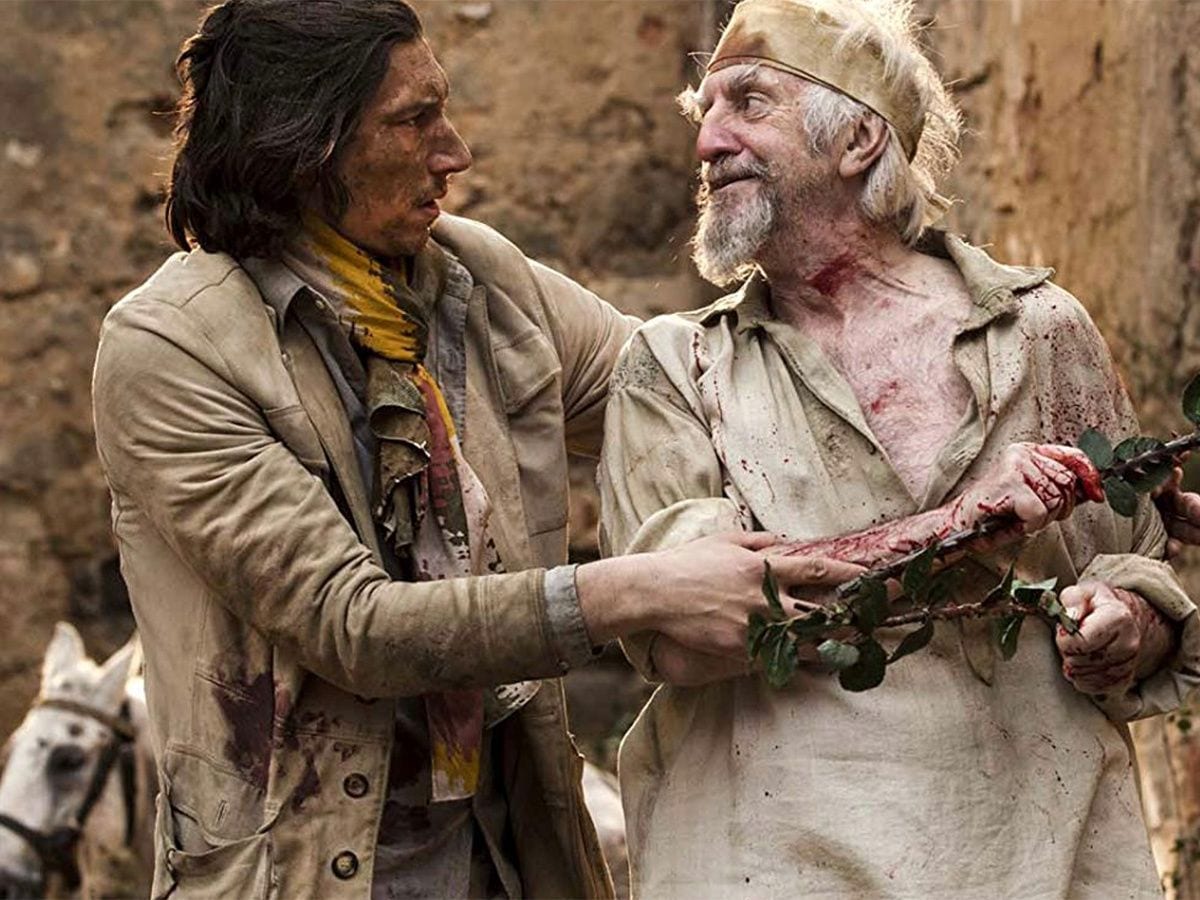 Angelica’s ambitious pursuit that leads her into sex work is another example of fantasy and reality. It’s a curious and uncomfortable fate until it’s considered in the context of Gilliam’s aforementioned comments. Angelica describes herself as Alexei Miiskin’s (Jordi Mollá) “whore”. Miiskin is a wealthy white male who throws a costume party that Quixote, Toby, and the film crew are all invited to. Alexei may be read as an imitation of Weinstein, and Angelica is little more than woman as sexual object.

In No Man Is an Island (1955), Thomas Merton wrote, “Art enables us to find ourselves and lose ourselves at the same time.” This is a beguiling way to describe The Man Who Killed Don Quixote, because Quixote, Toby, and Angelica, moving from their everyday realities to their roles as actors or storyteller, find and lose themselves. Gilliam realizes the cruelty of such dreaming — we can dream, but not as big as we may want to, nor can we sustain the dream.

The last sequence is a fitting fate for Toby and Angelica, the latter reciprocating to the storyteller and dreamer who awoke her dreams, as Toby perhaps comes as close as he can to what was the happiest time of his life. Gilliam’s film reaches a point that it considers our need to dream and to fantasize, to live out life in our minds, a defence mechanism that allows us, in the words of playwright George Bernard Shaw, to “…endure the operation of life.”

French critic and filmmaker François Truffaut asked, “Is the cinema more important than life?” If The Man Who Killed Don Quixote were to answer this question, while it may not answer in the affirmative, it would say that cinema, and more broadly storytelling and imagination, are very important to our well-being.

In his 25-year pursuit of putting this tale to film, the chivalric spirit of Cervantes remains intact, and as expected, Gilliam’s vivid imagination yields a heightened and surreal adventure of fantasy and reality overlapping. Could The Man Who Killed Don Quixote usurp Brazil (1985) as his masterpiece? Caught somewhere between the affable enough The Brothers Grimm (2005) and his other notable works, 12 Monkeys (1995) or Fear and Loathing in Las Vegas (1998), Gilliam’s white whale eludes.

While not perfect, and in spite of its length, viewers will enjoy it. The film may have its lulls, but the characters are lively, and Pryce and Driver play off each other with perfect comedic timing. They humorously antagonise one another, yet form an affectionate bond that gives the film an effusive charm, and a strong ensemble cast supports them.

It may require time to pass before Gilliam and co-writer Tony Grisoni’s The Man Who Killed Don Quixote is fully appreciated, and its ranking in the Gilliam oeuvre is established.