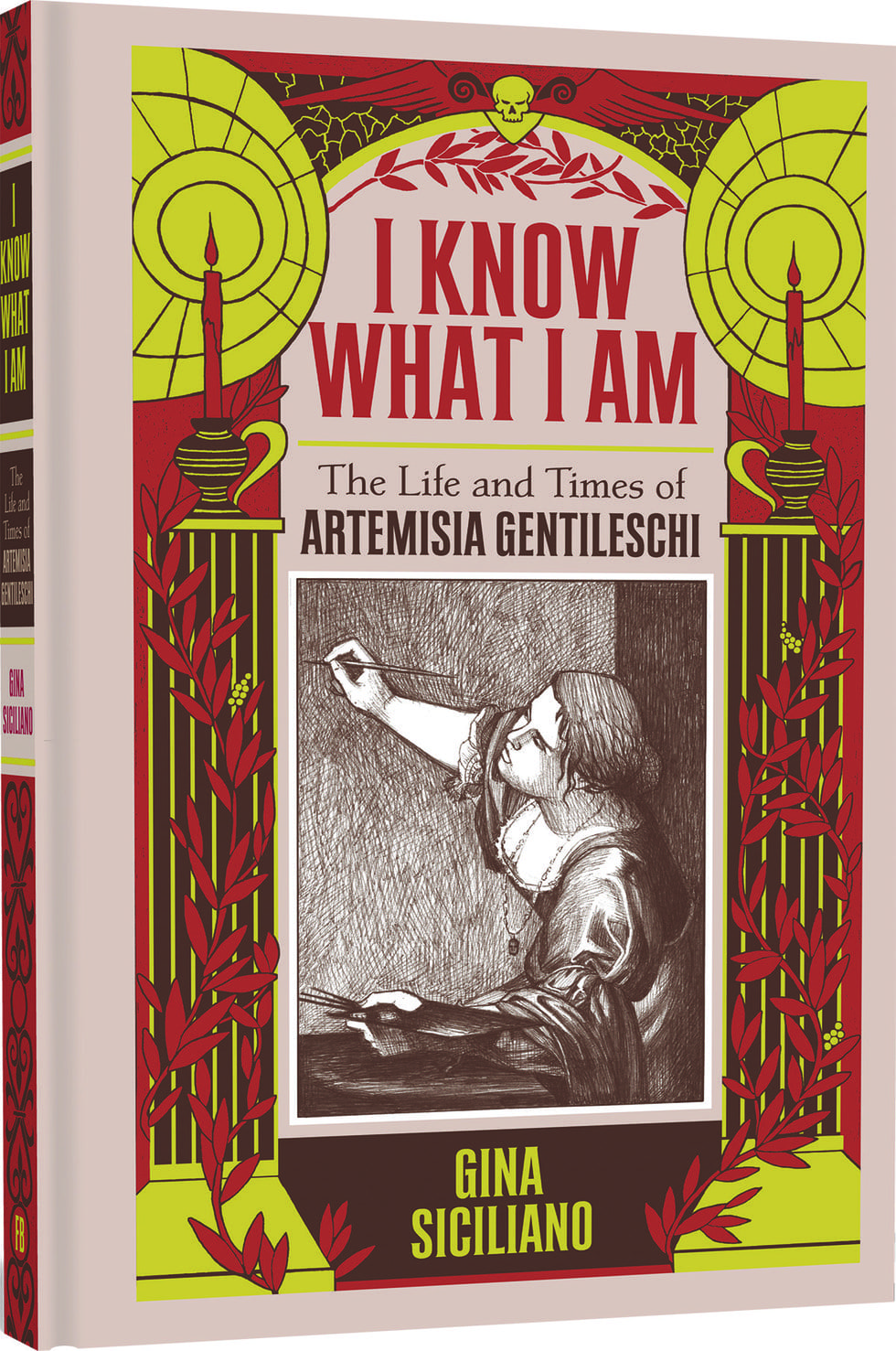 I Know What I Am: The Life and Times of Artemisia Gentileschi
Gina Siciliano
Fantagraphics

There’s something intellectually delicious about a graphic narrative about an artist. While there are plenty of other kinds of self-referential visual art that literally draw attention to their own compositions, the best graphic narratives provide a useful counterpoint to what can otherwise devolve into art-for-art’s-sake navel-gazing. There’s a story. There’s a constant forward-pushing narrative-drive urging readers to keep reading, to not pause over each picture but to glean the necessary information and turn the page to see what happens next. But the viewer in me still wants to pause, wants to study the paradoxical crosshatches that combine to form the figure of an artist seemingly drawing herself.

If you’re like me and so are no scholar of Renaissance painting (or recipient of a good European education), you might not have heard of
Artemisia Gentileschi — but you most likely know at least one of her famous works. Artist Gina Siciliano‘s graphic biography will help Gentileshci’s story, as well as her work, to be better known. I Know What I Am is a formidable work of comics scholarship, including 50 pages devoted to detailed notes and bibliographic sources. The notoriously research-obsessed comics writer Alan Moore may have a rival. Nick Sousanis’ graphic novel Unflattening earned him a PhD from Columbia University. Perhaps Siciliano should be eligible for a similar degree.

Siciliano opens her graphic biography,
I Know What I Am: The Life and Times of Artemisia Gentileschi with a title-page recreation of Gentileschi’s 1610 painting, Judith Slaying Holofernese. It’s an extraordinary image: two women overpowering a man and slicing through his neck with the determined diligence of a slaughterhouse crew. If you look at a photograph of the original, you’ll see Siciliano’s recreation is remarkably similar. Of course instead of blended oil paints, Siciliano combines the tiniest of pencil marks into areas of near blackness, suggesting an exceptionally meticulous process. But there’s something else, some difficult-to-name difference in the slightly less detailed faces, how the unmarked areas of the page bring out an emotional nuance, the teetering difference between indifferent triumph and triumphant indifference. 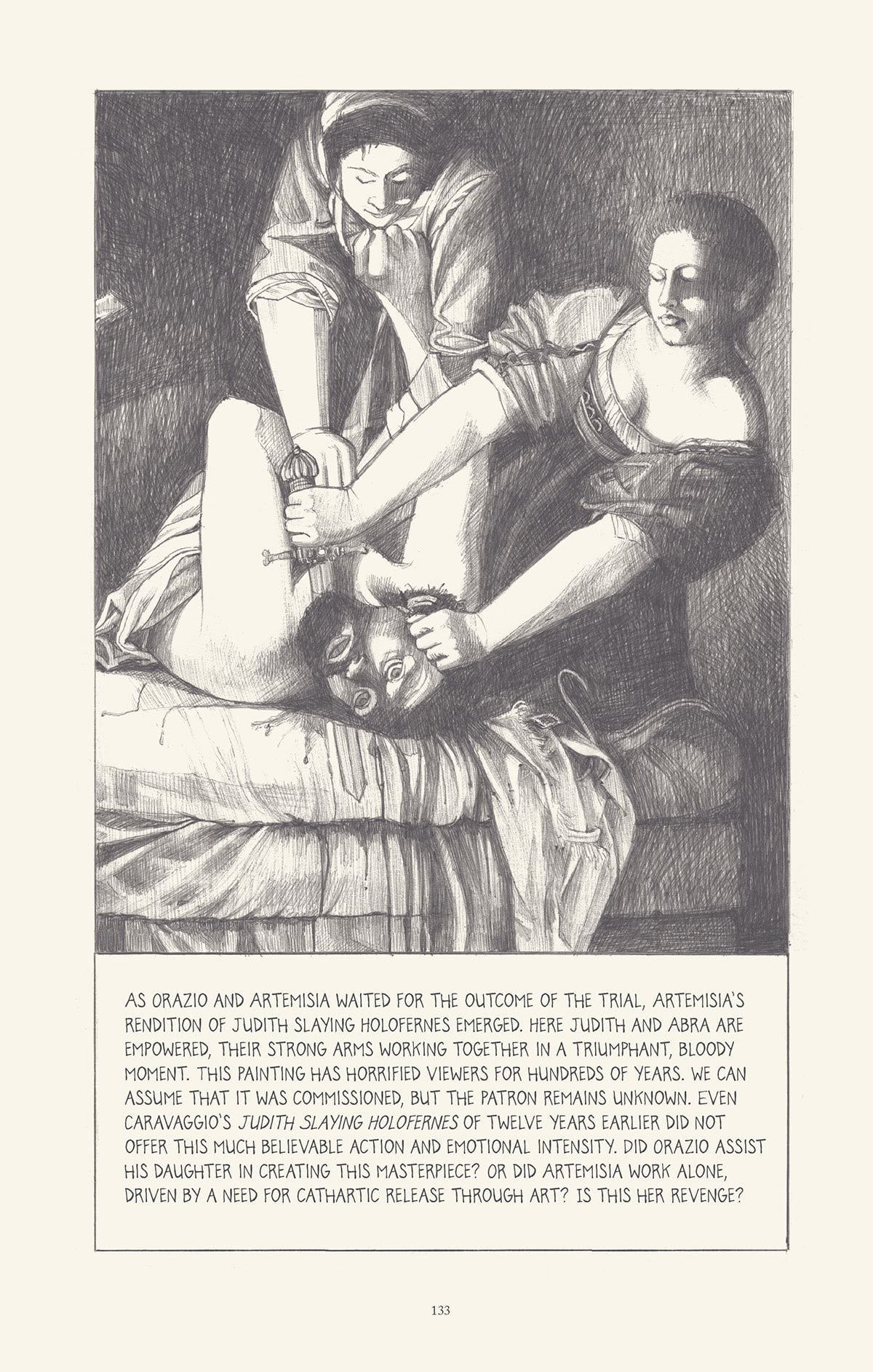 It’s difficult not to read Siciliano’s experience into that edge of difference too, since her preface opens with her first viewing of the painting and how it initiated this project. It also centers on Siciliano as a survivor of sexual abuse and Gentileschi as a rape survivor. Perhaps fearing a #MeToo backlash, Sicilian foregrounds what others might regard as her bias and aims for transparency, explaining: “That is why there’s a lengthy notes section at the end, so that readers can trace all my decisions if they want to.” I trust Siciliano’s viewpoint but appreciate the notes all the same.

Even if you’re not inclined to interrupt the narrative flow by flipping to the back of the book every time you glimpse one of Siciliano’s recreations or wonder about the historical basis of an event, her scholarship is embedded in her art. Below her penciled copy of Judith Slaying Holofernese she draws the words: “ALL LOWER-CASE LETTERS REPRESENT QUOTES FROM SOURCES LISTED IN THE NOTES SECTION AND BIBLIOGRAPHY IN THE BACK.” The juxtaposition is brilliantly peculiar, a righteous beheading coupled with a scholarly disclaimer. It is a fitting introduction to the hybrid narrative that follows.

Hopefully my extended attention to a single image is fitting too, since it echoes Siciliano’s approach. The graphic narrative opens with Artemisia’s father viewing Michelangelo Merisi da Caravaggio’s newly painted The Calling of Saint Matthew in 1600, using it as the organizing principle for the first 15 pages. Artemesia doesn’t make her first appearance until page 18. Instead Siciliano traces the crosshatching histories of Rome’s Counter-Reformation through the figures of philosopher Giordano Bruno burned alive for heresy, Beatrice Cenci publicly executed with her family for orchestrating the murder of her brutally abusive father, and Caravaggio, whose improbably complex and violent life is an extended side note to the influence that the renown painter had on Artemisia’s father, a struggling painter who eventually trains his daughter in his craft.

When it comes to motivations, Siciliano is carefully circumspect with probabilities while also constructing plausible paths. She answers the most central question, “Why would Orazio teach his only daughter the secrets of his trade?,” with a rhetorical question: “Was it because his sons simply did not show the technical ability, creative drive, and commitment she did?” The implied answer is, of course, yes. Flip to the notes for this pivotal page, and you’ll learn instead about the church transept Siciliano recreates in the image background. That juxtaposition describes the biography’s overall approach, meticulously rendered visual scholarship coupled with highly educated invention.

Siciliano is also spinning a story. While painting her first masterpiece, Susanna and the Elders, the teen Artemisia must also escape the abusive attention of multiple male characters plotting against her. The first of the book’s three parts closes with a closing door, as if Siciliano refuses to invent the visual details of her heroine’s rape. But she then illustrates the court transcripts, disturbingly explicit in lower-case font, at the start of the next section.

The trial is lengthy, involving pages of witnesses and cross examinations, as well as the gynecological testimonies of two midwives and the repetition of Artemisia’s testimony while being tortured. Part three opens with her rapist’s banishment and her hastily arranged marriage to her patron’s younger brother, a painter she had never met. Children, commissioned paintings, romantic intrigues, sword fights, and more court scenes follow as Siciliano’s scope widens to include Galileo, the eruption of Mt. Vesuvius, and the 1647 political riots in Naples.

The six decades of Gentileschi’s life are too rich to summarize here, but one detail especially resonates. Before the trail and at its conclusion, Siciliano recounts how Artemisia emphasized the connection between two women of different social classes bonding together to kill a tyrant enemy in Judith Slaying Holofernese. That division-crossing bond suggests Siciliano’s own connection to her subject matter, as the two artists seemingly work together across centuries to construct, image by recreated image, fact by researched fact, a moving biography and cultural history of early 1600s Rome. 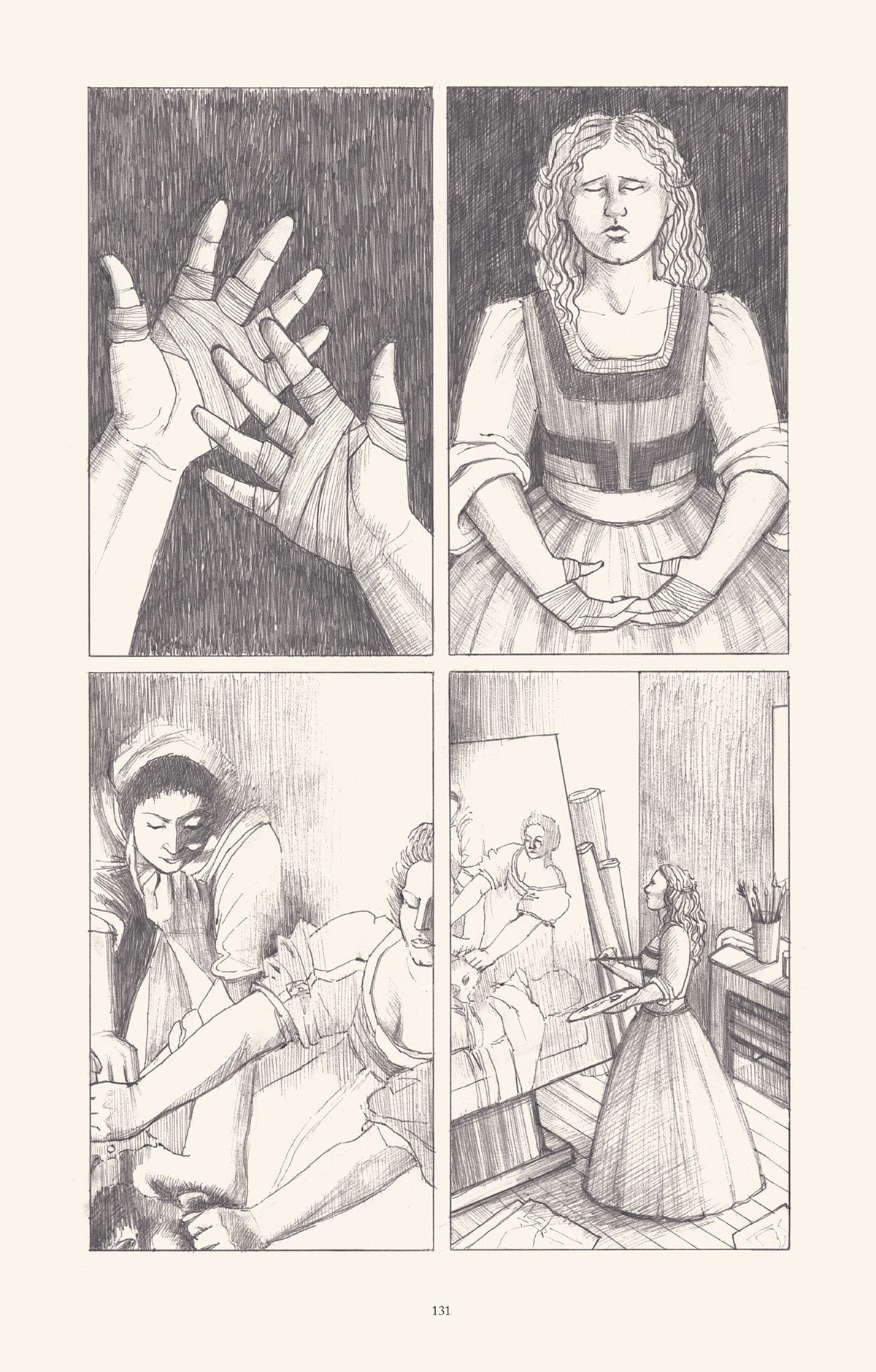 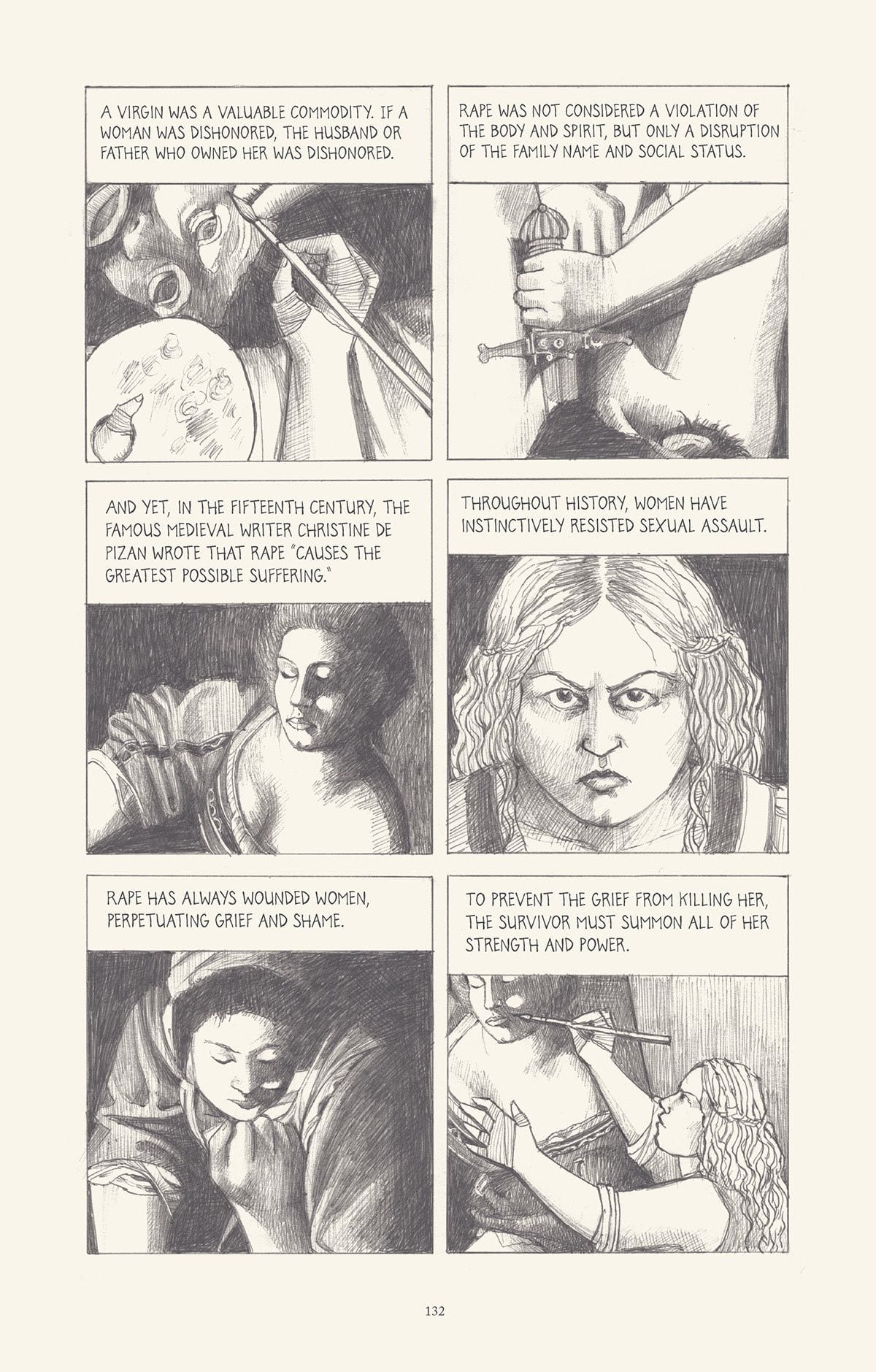 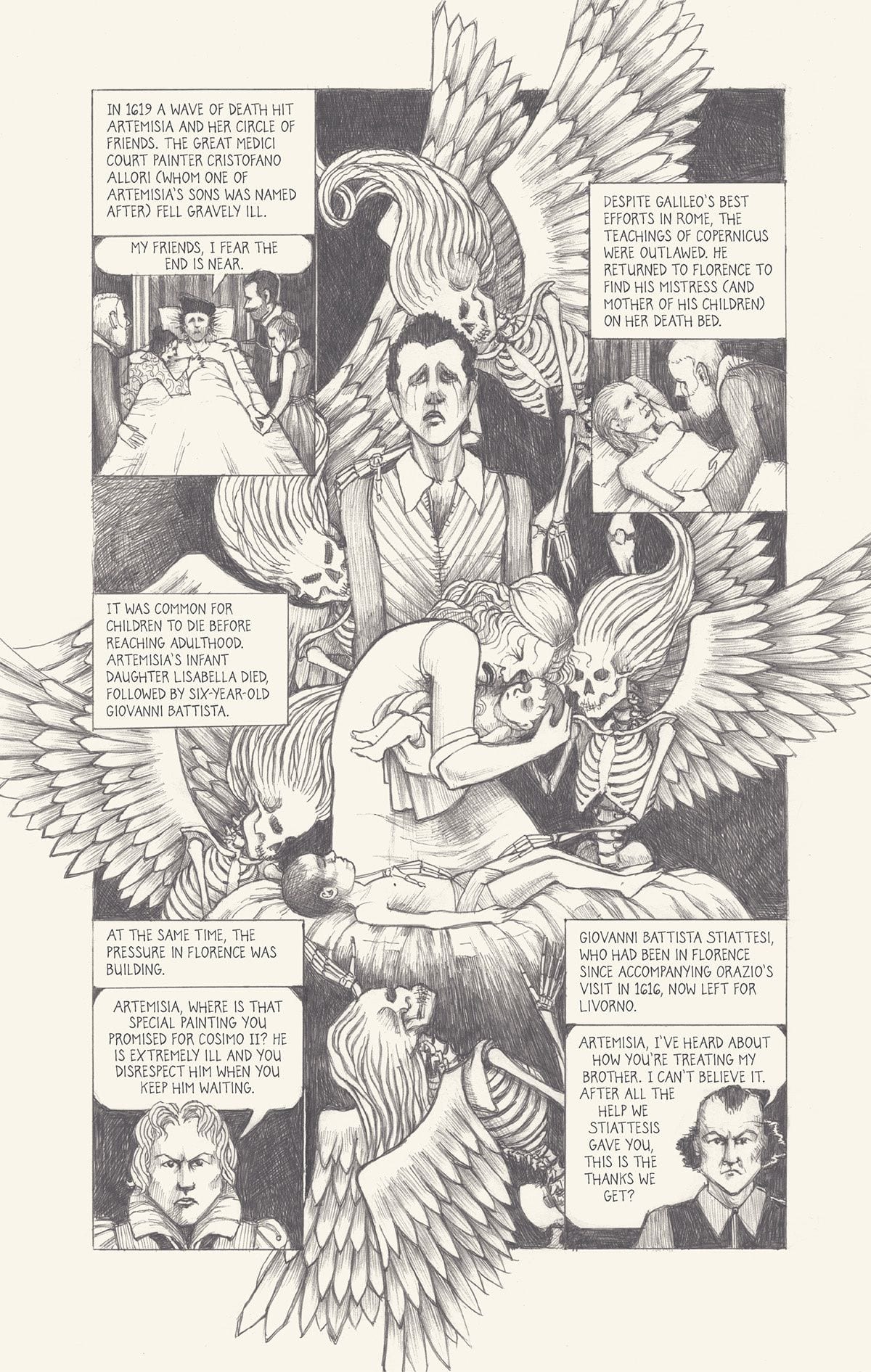 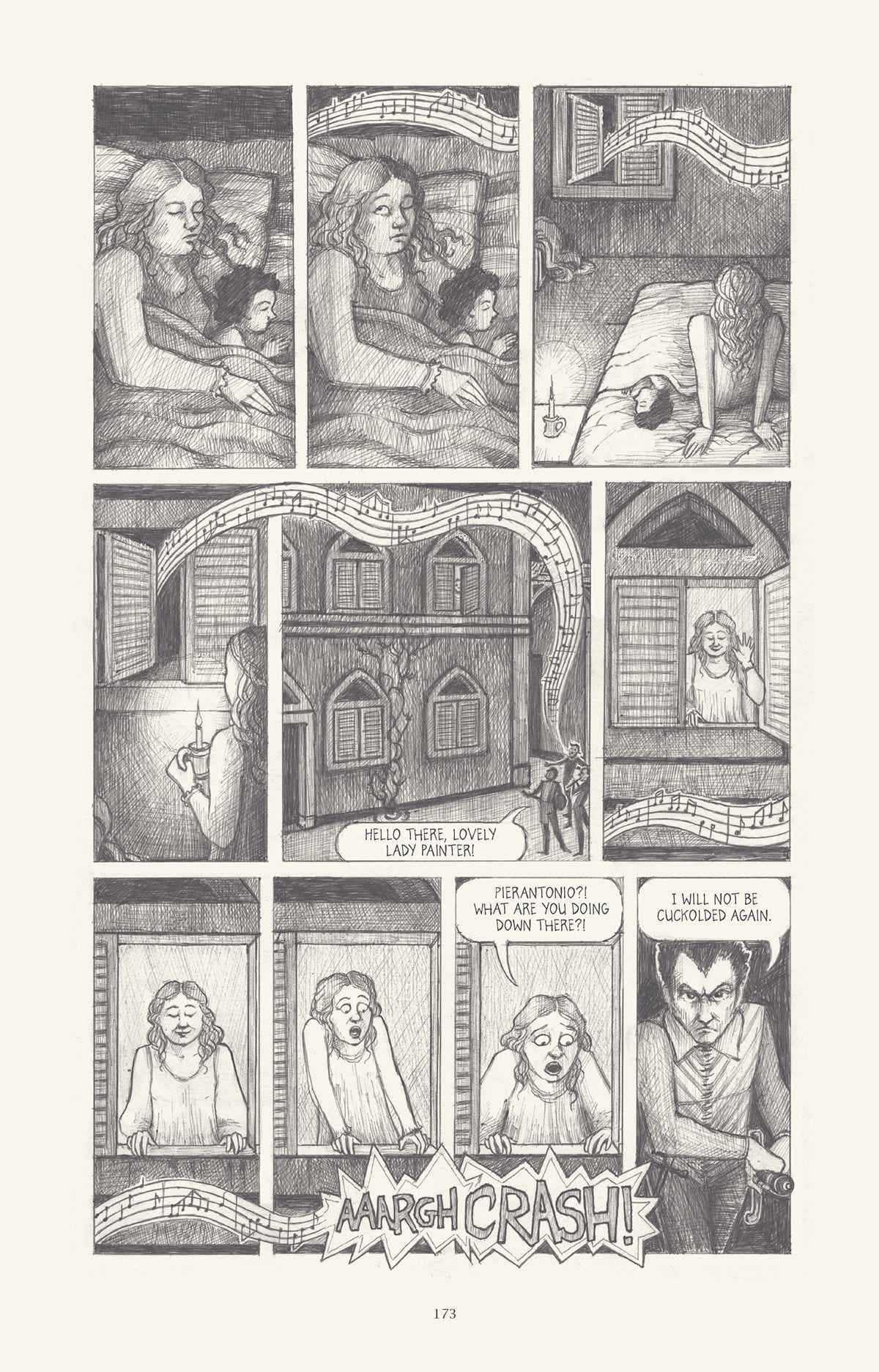 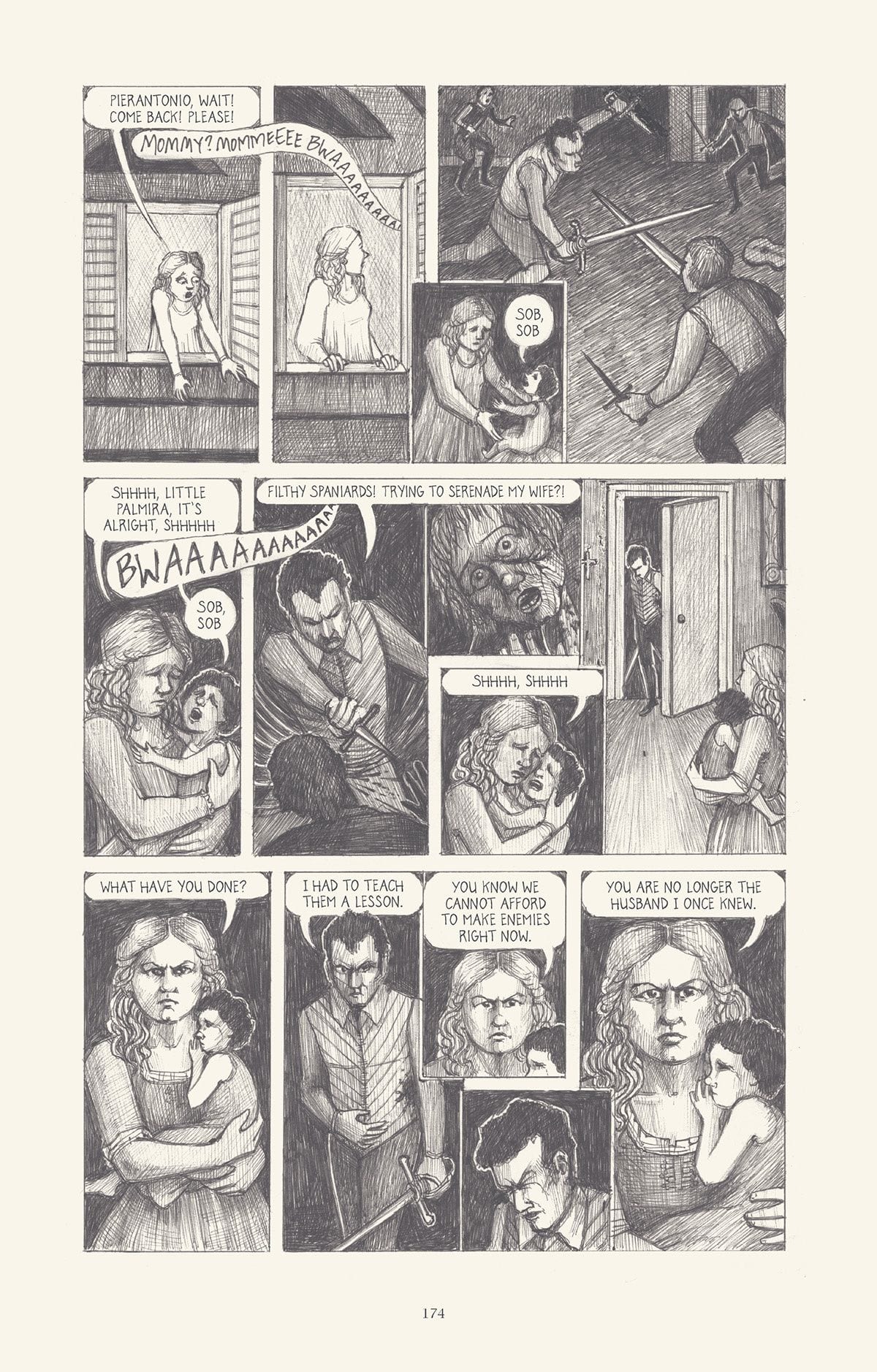