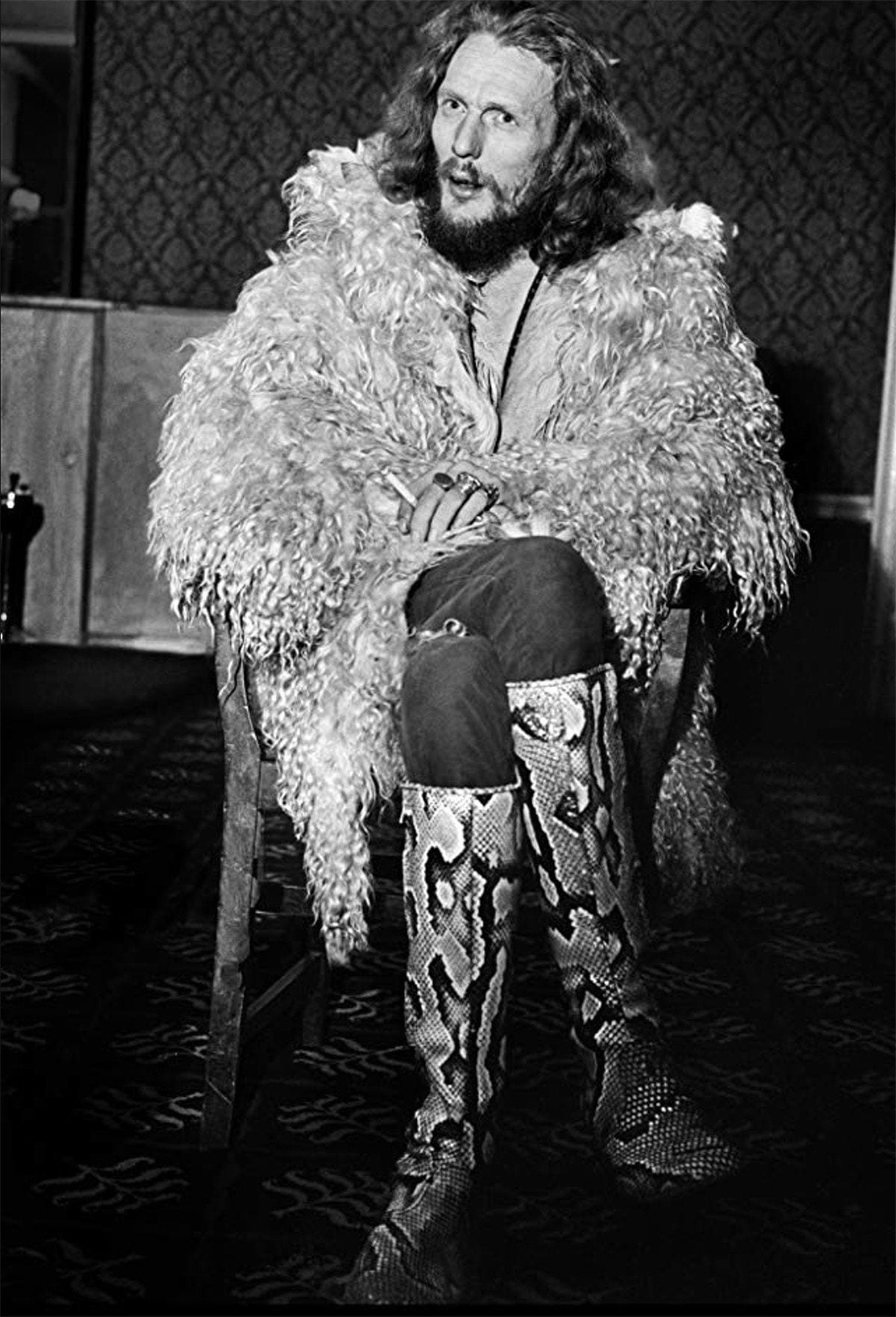 Of course his father was a bricklayer, and it could be said that his son, born Peter Edward Baker, was one as well. But instead of a shovel he picked up sticks and busied himself changing the future of rock music.

A complicated, brilliant man, Ginger Baker made it his business to make enemies. After eight decades and almost as many grudges under his belt as gigs played, it seems fair to conclude that his worst enemy was himself. With a capacity for self-destruction as epic as his musicianship, it’s difficult to believe he managed to make it to 80-years-old. Unless, one reckons, all that anger fueled and fortified the hot blood boiling his bilious heart. He was too angry to die.

As even a cursory appreciation of Baker’s career makes plain, it neither began nor ended with Cream. It is as the drummer of the first rock supergroup and power trio, however, that he will be best remembered. Unlike so many other pop acts that seem shot out of a cannon, each member of Cream had put in the time, paid the obligatory dues, and established solid bona fides before the magnetic urgencies of their mutual talents pulled them together.

Cream wasn’t built to last, and they didn’t, but needed only a few years and a handful of albums to leave an unassailable mark. It is as much a tribute to Jack Bruce and Eric Clapton as Baker’s ego that he forced drums to the forefront; with this much ability and ambition on one stage, any rhythmic support needed supersizing to keep pace. Baker was the ideal man for the gig: a large man with a huge sound, he had a finesse and touch virtually unheard of in pop music circa 1966. He claimed he was a jazz drummer, and was the first (and possibly only) timekeeper in rock to insist that drumming had to swing.

Swing he did. Early tracks like “Wrapping Paper”, “I Feel Free”, and “Four Until Late” remain astonishing not for being revolutionary so much as unfettered, full of history but seemingly free from influence. The drums aren’t louder so much as ceaselessly present in the mix, on equal sonic footing with Clapton’s pyrotechnics, Bruce’s prodding, supple bass and swaggering vocals. Fresh Cream (1966) endures in certain ways as the rock ‘n’ roll equivalent of Dorothy waltzing from black and white Kansas into the psychedelic, full-color dreamscape of Oz.

With hindsight it’s easier to imagine—and appreciate—what an ostensibly simple track like “Dreaming” sounded like the first few times. Multi-tracked harmonized vocals, Baker’s thick-fingered bass, and Clapton in full-on god mode, the fact that the galloping toms and shimmering cymbals float within and somehow on top of the tune is remarkable.

We can thank Baker for inventing, or at least normalizing, the drum solo, subsequent showcase (and/or lowlight) of every rock concert since the late ’60s. If “Toad” has aged poorly (like 99.9% of all rock drum solos ever), it certainly worked wonders when deployed in Scorsese’s Casino. And while Keith Moon, circa 1966, was already rolling and tumbling behind the kit as wunderkind from the Who, he had neither the street cred or audacity (or permission) to take a proper drum solo on a studio album. “Toad”, for better and definitely worse, changed all that.

Already an icon, Baker spent the remainder of the decade doing his part to elevate what rock music was capable of being, and how it could be received. If his famous and innovative one-three beat on “Sunshine of Your Love” launched imitations, the bolero flourishes on “White Room” lend the proceedings an almost regal air. These songs were statements from a band that took itself very seriously saying, in effect, this is serious music. They were right, and the world responded, accordingly.

No bandwagon jumper, Baker wound up in Lagos and aligned himself with Fela Kuti who, while already a legend-in-the-making, was not yet the Prince of Afro Pop and certified as one of the most significant politically-minded musicians of the 20th Century. For a man who took the roots of rock back to jazz, he really got back to the origins with his adventures in Africa. Again, this was neither for show nor for discernible commercial appeal; he was following his muse.

“I was an evil person back then,” Baker said, half-reminiscing, half-apologizing for the figure he cut in 1969. This was in 2009 and if anyone, regardless if they’ve read all the stories and absorbed all the anecdotes, has seen even five minutes of Jay Bulger’s 2012 documentary, Beware of Mr. Baker, it’s at once amusing and appalling (and more than a little frightening) to imagine that the insufferable, mean-spirited, petty old crank of the 2010’s is in the teens “kinder gentler” version. There was, in short, very little Dr. Jekyll but a whole lot of Mr. Hyde. He was rock ‘n’ roll’s Rasputin, but also a brave Ulysses in search of the right sound, taking him everywhere from London to Colorado to South Africa.

At once sure of himself and paralyzingly insecure, Baker could brook no competition. He suffered no fools, but everyone, in his estimation, was a fool; therein lay the rub. His inability to say a kind word about anyone was over the top, certainly, but there was also a refreshing sincerity in his belligerence. It’s likely Baker will remain the only rock hall of famer to court bankruptcy paying to import polo horses. This, along with his on-again/off-again relationship with heroin and bandmates may be further evidence of an addictive personality, but also illustrates the passion bordering on obsession that guided his peripatetic life.

Unlike many of his contemporaries posing as art collectors or ceremonial knights, Baker eschewed the spotlight and only had tolerance for what compelled him. Not many of his colleagues would—or could—include names like Steve Winwood, Elvin Jones, Bill Laswell, John Lydon, Bill Frisell, and Charlie Haden (among many, many others) on their resumes.

Now that the “Big Three” (Moon, Bonham, Baker) are gone, and fellow contender for the crown Neil Peart is effectively retired, it’s fair if futile game to anoint the king of the hill. Rush’s Neil Peart is perhaps the more indelible showman; the Who’s Keith Moon the ever-inventive whirling dervish, embellishing but never distracting; Led Zeppelin’s John Bonham the Platonic ideal of timekeeper and bomb-dropper. Ginger Baker, who combined flash, style and an almost workmanlike approach, was the drummer’s drummer, his remarkable arsenal always deployed purely in the service of the song. He seldom showed off, content simply to make history, and if he’s never accorded the number one slot, it’s both because of and a tribute to his versatility.

In Baker’s eyes there was only one person whose opinion ever mattered, and as a man who contained maddening multitudes, on that score he was always consistent: he was first and he was best, end of story. For an artist whose discography spans continents both literally and stylistically, there was one reliable thing: Baker knew what was needed, and if he had to invent new ways of forcing rhythm to the forefront, that was his job. It will remain his legacy.