Giorgio Moroder might be entering yet another glorious era as a musician. He pushed disco into art during the ’70s, defined the sound of movie soundtracks in the ’80s, and after taking a long hiatus from making new music, he came back with Daft Punk in their seminal 2013 release Random Access Memories, as well as his own album Déjà Vu (2015), in which he collaborated with stars like Britney Spears, Kelis, Sia, and Kylie Minogue. Now he also has the score for the television series Queen of the South (USA Network), which he composed with Raney Shockne after the pair worked together on Déjà Vu.

Before taking on Queen of the South, Moroder hadn’t written a score for a piece of media in almost two decades: his last score had been for Leni Riefenstahl’s documentary Underwater Impressions in 2002. The underwater saga showcased Riefenstahl’s love of diving, and Moroder’s score helped highlight the otherworldly qualities of the deep sea. In Queen of the South, he’s back in familiar territory; the television drama focuses on the rise of Teresa Mendoza (Alice Braga) and her drug empire. The show is an adaptation of a popular telenovela itself based on a novel by Arturo Pérez-Reverte and is currently in its third season.

For the score, Moroder and Shockne have created pieces that evoke a seductive combination of fear and admiration, perfectly capturing the spirit of the show and its antiheroine. Their main theme is vintage Moroder, reverberating notes that feel both classic and futuristic, fit for a runway, a club, or a Mexican desert. The album is a reminder of the ways in which the Moroder sound has influenced other composers, including Shockne. We spoke to the duo about the entry point into the sound of Queen of the South, the genre they’re trying to perfect, and what’s next for them. 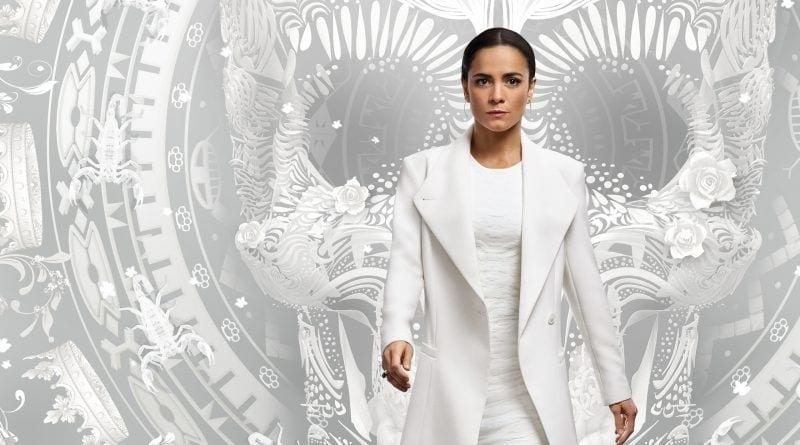 You got footage of the show before starting to write the music. What was your entry point into the mind of Teresa, and what would become the sound of the show?

Raney Shockne: The first footage we saw was a scene where Teresa is coming down from a helicopter with her white dress, entourage, there’s cocaine, uzis, it’s very violent and glamorous. Giorgio and I looked at each other and said “Let’s create a new gangster score that can spread across the world.” That was basically it, we started to play with the synthesizers and it came pretty quickly.

Giorgio Moroder: We started a sound we call “electro-noir”.

Are there ever any ethical conundrums or moments of doubt when you create gorgeous music inspired by characters who do terrible things?

Moroder: I love how dark the show is, but the show is dark enough, so if you were to emphasize it with dark music it would become a little overwhelming. If someone’s killing someone, you don’t need to emphasize it. Scores should work with the pictures, but they shouldn’t overwhelm it.

You use the same motifs in the songs “Queen of the South” and “Moyocoyotzín”, both of which evoke different sides of Teresa. I’d love to learn how this motif came to be.

Moroder: That was the first important piece we did. We worked hard on it and it’s a good melody, and it works as a threatening piece, but if you change the arrangement a bit it’s upbeat. In all the movies I’ve scored, I’ve wanted to find good melodies you can weave into the story, that people get used to, music that almost gives you a story about how the movie develops.

In many ways, the journey of the album feels like an opera without words.

Shockne: It’s very cool that you said that, thank you. When you’re dealing with Giorgio, you are dealing with someone who is epic in scope. The first time we wrote together I said “This feels really dark,” and he said “No, it’s not dark! It’s dramatic.” And that’s what we’ve been doing ever since.

In what ways does your process change from composing alone to writing together?

Moroder: In this case, I work easier when I work with Raney, because when I work alone I have to do more, I have to do arrangements for example. Working with Rainey I come up with the melody, then he came in with years of expert musicianship and being a great professional creator of sounds. That’s when the heavy work comes in, so thank God he’s doing it so well, cause my work day today is less. We come up with melodies together now and Raney polishes and makes them work for the show.

Shockne: I just add a little sauce to Giorgio’s pasta.

The score avoids falling for clichés, you don’t give it a faux Mexican flavor, and yet the pieces are so evocative of the place where the story unfolds.

Shockne: It goes back to the idea that the two of us have really been cultivating electro-noir, it’s very dramatic music. We thought using electro-noir would give people something different in terms of the sound they’ve come to expect from a show like Narcos or other cartel-oriented shows. Showrunners loved the idea because this sound seemed to fit the lifestyle of the people in the cartels. 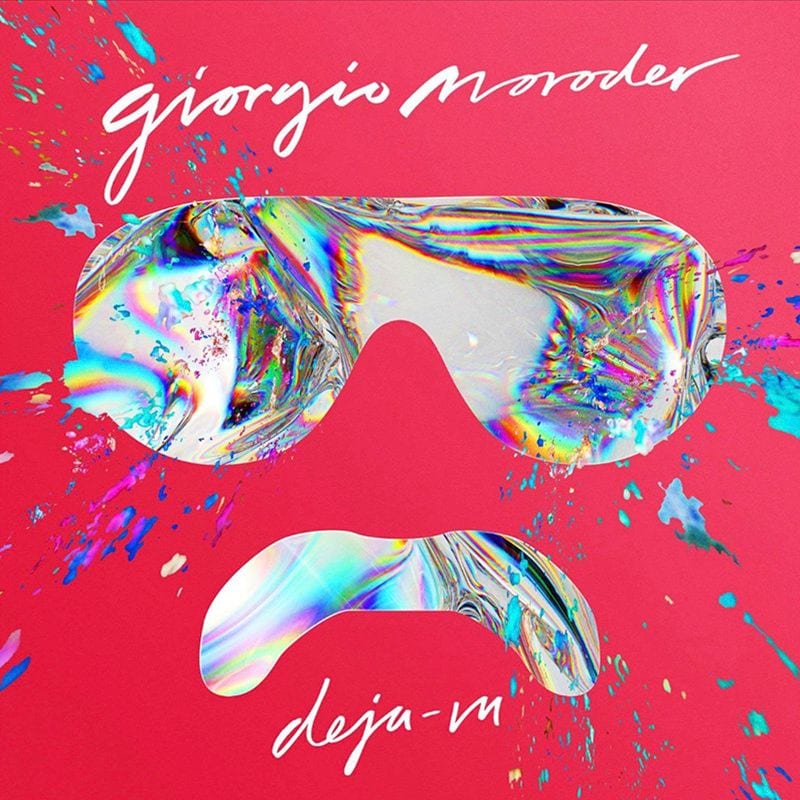 You first worked together on Déjà Vu, which is a phenomenal album. Giorgio, you don’t want to know how many times I’ve listened to “Right Here, Right Now…”

Moroder: Isn’t Kylie singing well in that song? Everybody says she’s a great singer but she’s no Barbra Streisand. In that song she really belted it out, I was shocked when she came up with that really high note.

Moroder: You do songs for people like Kylie or Sia and that’s the normal way to go, but when you make a score for a movie that’s the normal way to go, too. I’m not even talking about hitting the points of the movie but creating the feeling. They’re both different things, and you change your mind sometimes, it’s not a song but a score, so it’s not a big deal really. For me, it was relatively easy.

[Raney announces he has to go do the mix for an episode and has to leave the conference call.] Before you go, are you planning on doing an opera or a musical together after having done an album and a TV show score?

Moroder: Let’s do an opera, we can go to Milano, to La Scala.

Shockne: That would be fantastic! I think we should do Scarface: The Musical. [sings] “Toooony, Tooony Montana.”

[Raney leaves] Giorgio, your work during the ’80s was fantastic because you brought back big movie songs, I loved “Take My Breath Away” as a kid. In the Queen of the South soundtrack you included two covers, “Everybody Wants to Rule the World” and “One Way or Another”, but they’re done in such a unique way that they sound like brand new songs. Please tell us about your decision to include two song in the album.

Moroder: With “World” the idea was to rebirth it in a minor chord. When we did that it just popped up. When the Foreign Press presented “Call Me” at the Golden Globes, one of the singers started with the wrong key, instead of C he started with E, after half a minute I said, “Is this my song?”

So what happened to “Everybody Wants to Rule the World” is that the melody remains the same, but the chord is different, and then it goes back to the original chord. It clicked. We knew it would be more moody or intense than if we’d done the traditional arrangements.

“One Way or Another” sounds completely new too.

Moroder: The producers loved it, and Deborah [Harry] agreed to it too. I wasn’t sure she’d say yes, but she agreed and from what I heard she also liked it.

Your scores have influenced modern film music so much. Did you see any movies, when you weren’t doing music, that you wished you could’ve scored?

Moroder: I kind of lost a lot of interest. In the last 20 years, I kept getting all the videos because I’m a member of the Academy, so I watch maybe about 20 movies a year, the important ones. I love most of Hans Zimmer’s scores, he may be a little repetitive, but absolutely incredible. I personally loved the Drive [Refin, 2011] score …

Moroder: …but he did it better than I ever could’ve. I don’t know how he did it, but there’s one piece at the beginning [he begins to hum music from Drive] which might be inspired by me, but it’s so good.

The electronic stuff in The Social Network (Fincher, 2010) was well done too. If you hear a John Williams’ score it’s great, it’s piano, strings and all the classic instruments, but the sounds created lately with a synthesizer give you an edge which I like very much. I also liked The Girl with the Dragon Tattoo, Trent Reznor and Atticus Ross are so good together. Their sounds are clean but also different.

Since you’re talking about the orchestral sound, what was it like for you to listen to your songs go from synths to the big band sound in Summer: The Donna Summer Musical on Broadway?

Moroder: I can tell you the reverse of that. I saw the musical in San Diego and I think they changed it a little bit on Broadway, but two or four years ago I presented my songs, everything from “Call Me” to “Flashdance” with a big 45-piece symphonic orchestra. I got goosebumps! I’ve always thought my songs are quite good, but when I heard them played and sung by all these musicians it elevated the song. It was incredible. The way they arranged the music for Donna’s musical was very well done. I liked that they didn’t change the arrangements too much. The vocals on Summer are incredible, those three [women], what great singers!

Thinking about something like “I Feel Love” which is so iconic that Kylie and Madonna have sampled it in their own songs, what excites you about your material being molded into something different?

Moroder: That’s a little tricky. Sometimes you hear someone sampling you and go “Why don’t they make their own music?” If they ask if they can use your song and they do a good job, that’s OK. But some people steal samples and hide them in their arrangements, sometimes you recognize “This is a sample from Scarface” and they don’t ask, and that’s not nice.

A rapper, I forgot his name, recently used a sample of Scarface for one of his songs, but it was well done. If you take a sample and change it in a way it’s difficult to recognize the original one, that I don’t like.

What movie made you want to score films?

Moroder: There wasn’t one movie, until 1976 or so I was so concentrated on doing songs. I loved movies like everyone else, I loved Morricone, I have always admired his melodies and arrangements, but I never thought about doing it.

When Alan Parker asked me to do the music for Midnight Express I thought he was crazy. I was in the pop world, I was doing disco which I loved. Alan showed me the movie, I loved it and asked him what to do. He said “Don’t worry: give me one piece for when the kid runs away when he thinks he made it in Istanbul. Give me the feel of ‘I Feel Love’,” so I did the piece, it worked and he said that was all he needed. I asked him what about the rest of the score, he said: “Just do whatever you want.”