The 2018 movie Gloria Bell is a profound study of alienation and the human longing to break free from this condition, a condition which, as the movie foregrounds, is the dominant affect of life under late capitalism. The theme of alienation, prominent throughout, is initially signified by the movie’s title; Gloria Bell gestures towards the isolation of the titular character. Rather than situate the protagonist within a wider social context and network, the title formally presents Gloria as cut off and alone, divorced from human connections.

Throughout the movie, Chilean writer and director Sebastián Lelio’s patient and sympathetic camera lingers on the lonely life of Gloria Bell, brilliantly played by Julianne Moore. In the movie’s opening moments, we see Gloria wash her body in front of a bathroom mirror, reflecting upon her image and perhaps her life. From there, the camera cuts to Gloria alone in bed, taking prescription pills and trying to block out the loud noises emanating from the upstairs apartment. In the next scene, Gloria is alone in her car—a scenario that repeats throughout the movie—singing passionately along to Olivia Newton John’s “A Little More Love“. In the next scene, we see Gloria at work as an insurance agent, talking to unseen clients over the phone, discussing auto accidents and insurance plans.

In each scene, Gloria is alone, deprived of, yet longing for, human contact and connection.

After the conversation with her client, Gloria calls her two grown children. Each phone call goes directly to voice mail. In each message, Gloria reminds her children that she is willing and able to talk at any time, and she ends each message with a reminder: “It’s your mother”. While this concluding line may be construed as humorous—as if her children could forget—it also suggests a painful truth. While her children know Gloria is their mother, in their everyday lives, of which we later see glimpses, they act as if she doesn’t exist, treating her more as an annoyance and nuisance rather than a person with a rich and complex interior life. Although Gloria initially lives physically close to her children, both keep her at an emotional distance. 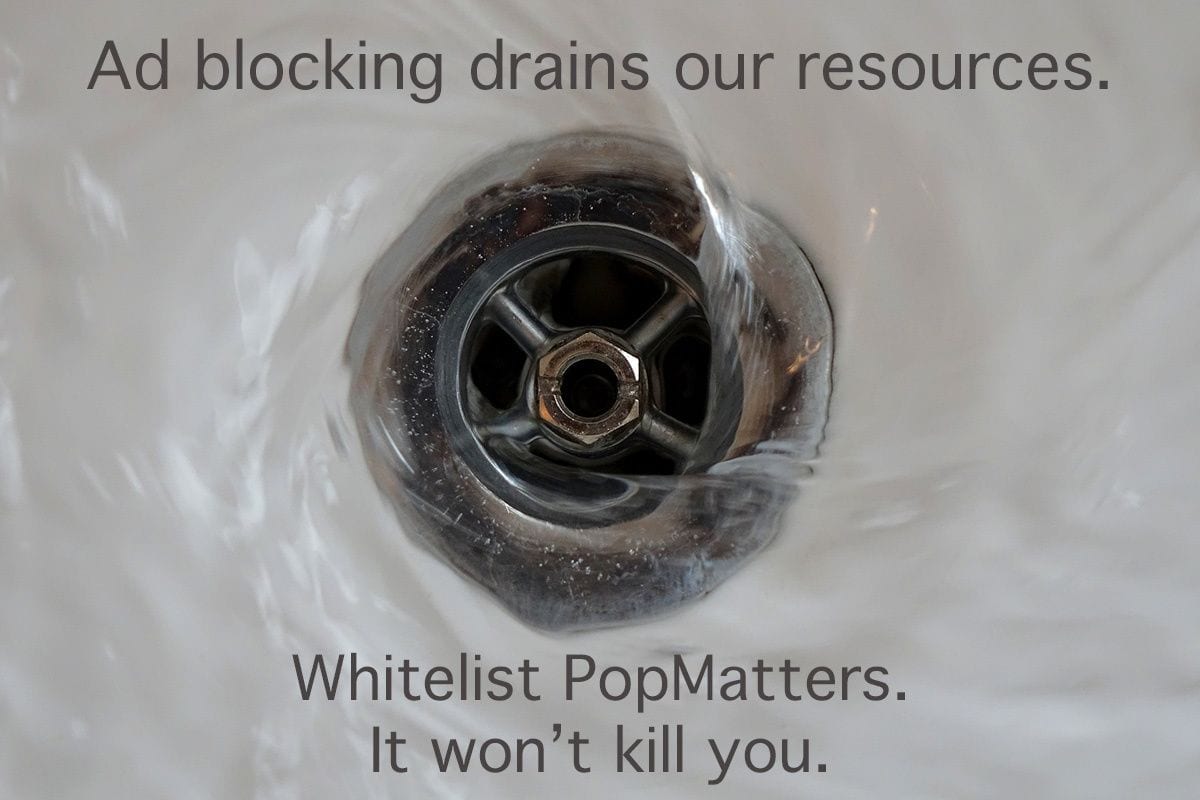 Gloria is a single woman in her 50s, divorced for 12 years, and throughout the movie, we see her longing to make authentic connections, to break the cycle of alienation. This attempt comes in many different forms including group yoga classes, group laugh therapy, and most prominently, dancing in clubs. All these attempts to break free from the condition of alienation are attempts to be in social settings, in social forms. Yet these social forms prove short-lived.

While this movie explores the difficulty of navigating the middle years of life, especially as a woman, it is a misreading, I believe, to think of it as an isolated case study, despite the fact that nearly every scene centers on Gloria. Rather, the movie is a generalizable exploration of alienation in late capitalism. All the characters in the movie, not just Gloria Bell, are disclosed as deeply alienated and searching, at times in desperate ways, for a more enriching, meaningful life.

When Gloria visits her adult son Peter (Michael Cera), he is alone with his crying infant son. Peter’s wife, we learn, is somewhere in the desert, trying to find herself. Her alienated search, which has lasted days, perhaps weeks, occurs off-screen. Throughout the movie, Peter attempts to find out where she is and when she might be coming home. Later, on Peter’s birthday, when all the family congregate to celebrate, Peter’s wife remains absent.

Likewise, Gloria’s adult daughter Anne (Caren Pistorius) teaches yoga and believes she has found love with a big-wave surfer from Sweden who travels throughout the world searching for the next big wave. Soon, Gloria learns that her daughter is pregnant. Gloria briefly meets the surfer/father-to-be just as he is about to enter a taxi for the airport. As he tells Gloria, he was in town to surf in Newport … and to see Anne. Anne hastily moves to Sweden, hoping to find fulfillment in a strange land with a “boyfriend” who doesn’t stay still. 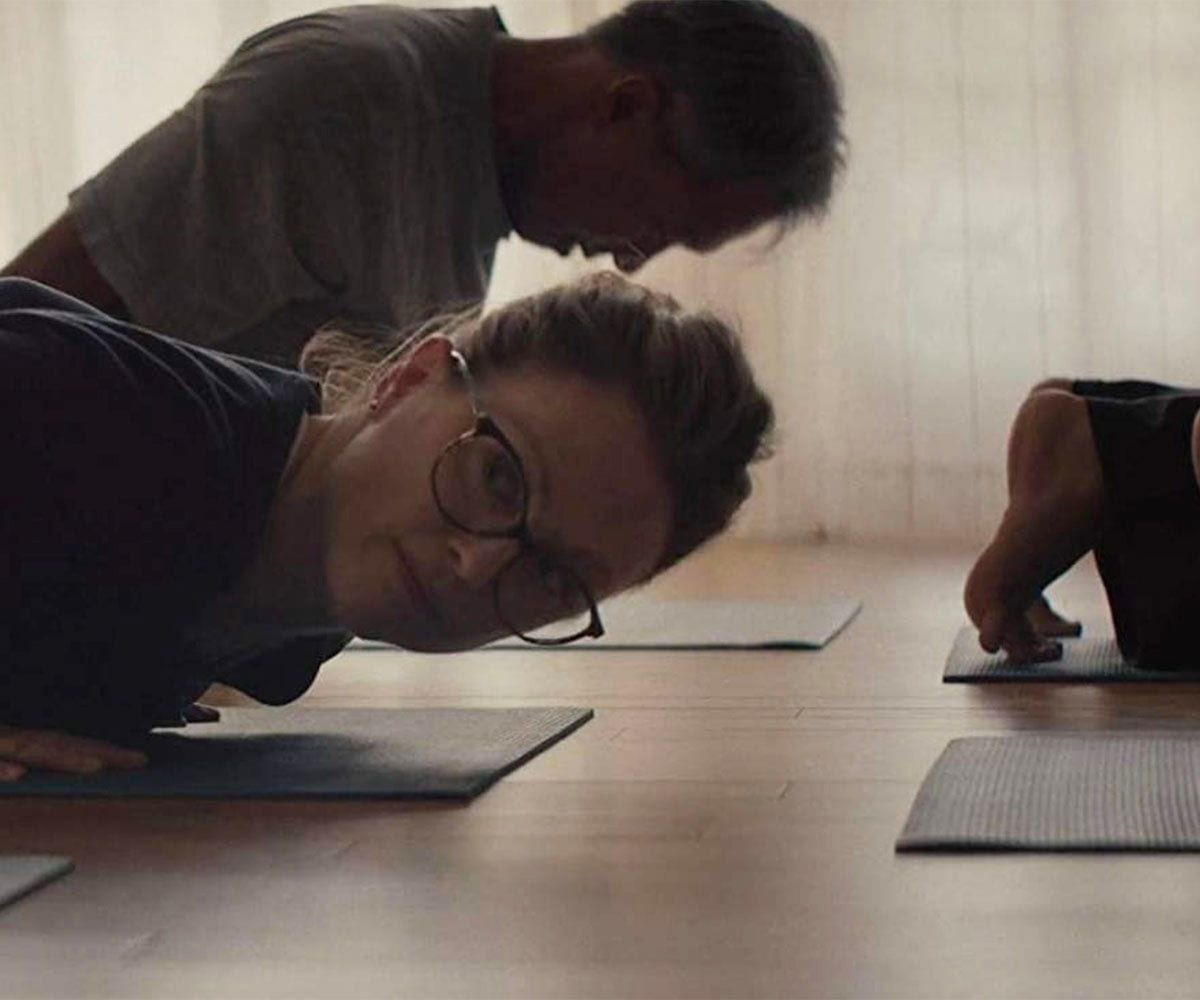 Alienation is one of the key themes of Marx’s analysis of capitalism. While there are many complex and profound ways to think about alienation, I want to highlight one of the more subtle, insidious forms that Gloria Bell exemplifies: Under capitalism, we become alienated from other human beings due to the prevailing value of ownership. The ideology of ownership not only extends to material property, goods, and services; it also means “owning” yourself, as if identity is a possession that the individual alone is responsible for through careful curation and planned showcasing.

Gloria Bell highlights how pernicious this ideology is for human flourishing. This normative ideology of the self-as-property means that the “self” becomes a commodity that is always on display and always judged in the public market. Moreover, the self-as-property means that one’s struggles and suffering are private and one’s own. Rather than recognize a shared world of inter-subjective suffering, vulnerability, and dependency, the characters in Gloria Bell live atomized lives that only occasionally break from this normative condition of alienation through outrageous, irrational means such as escaping to the desert or escaping to Sweden.

The movie presents a wide cast of characters who suffer in silence, unwilling to admit that they are hurting, suffering, and sinking … especially into financial ruin. Characters silently stand on the precipice of financial ruin, hoping that others don’t see their precarious position. 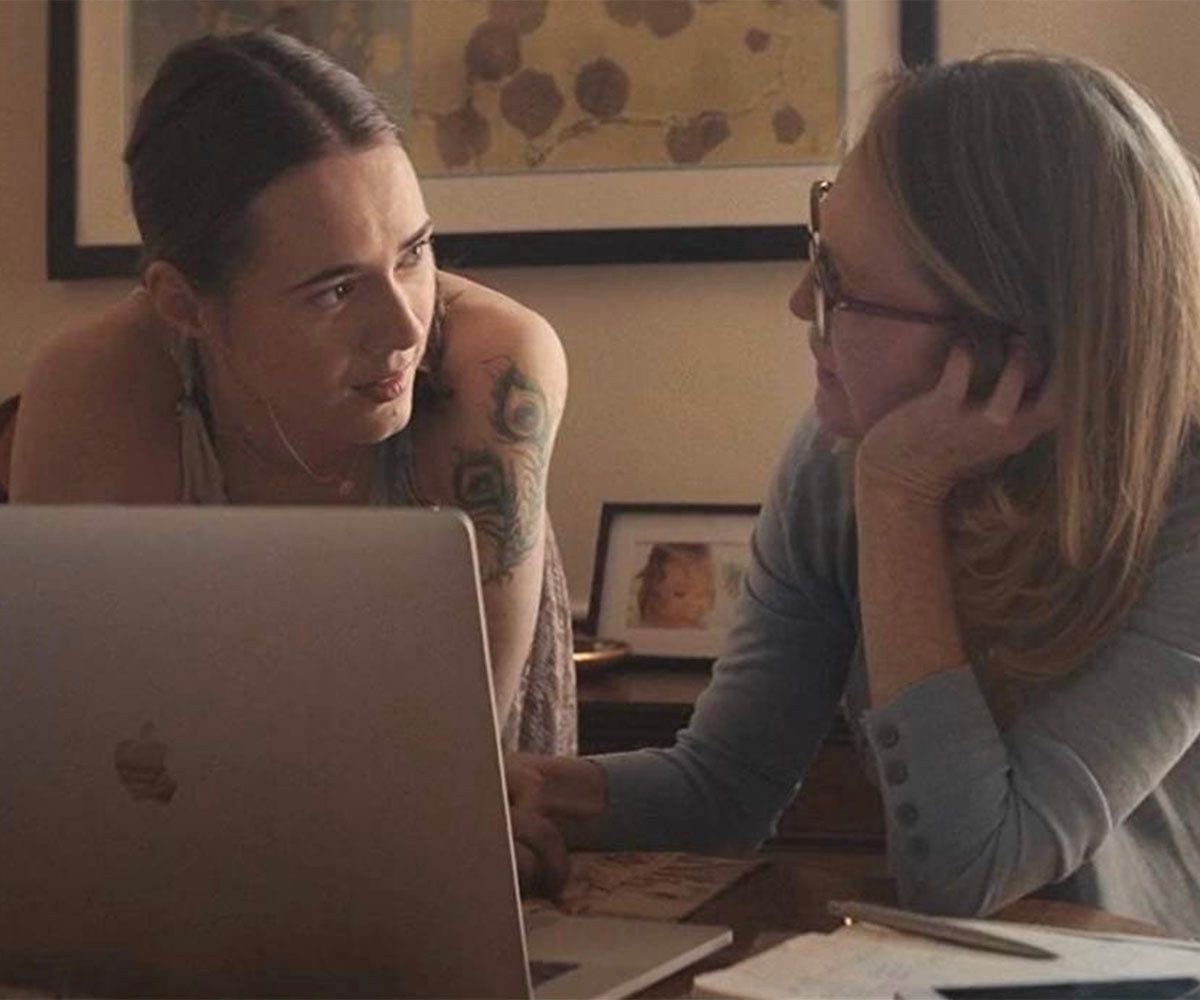 Caren Pistorius as Ann and Julianne Moore as Gloria (IMDB)

In one scene, Gloria Bell goes to lunch with her mother and the topic of conversation is dwindling finances. Gloria’s mother Hillary (Holland Taylor) explains to her daughter that her deceased husband left “just enough” for her to live on. She adds that she may be “living too long” and that there probably won’t be any finances left to pass on. They dine at an upscale dining establishment, and Hillary admits she likes coming to this restaurant with her friends, explaining that such excursions are one of the few joys of her life and her only financial extravagance. In many ways, the mother’s occasional fine dining is analogous to Gloria’s journey to the disco: they are both temporary reprieves from a material reality of crushing financial insecurity.

The reason why Hillary expresses concern with her daughter is because Hillary strongly suspects that Gloria is herself financially struggling. But Gloria won’t confess to any such struggle. She assures her mother she can pay her own bills. Yet when the tab arrives at the table, Gloria tellingly only pretends to reach for it. She cannot afford this luxury. It is likely that Gloria, like tens of millions of Americans, is one step away from calamity.

The only piece of indisputable good news, according to Hillary, is that Gloria has finally stopped smoking. But this is false. Throughout the movie, we see Gloria sneaking cigarettes.

The threat of financial freefall is made explicit through Gloria’s co-worker Melinda (Barbara Sukowa) Outside of the office, Gloria and Melinda commiserate over cigarettes. Melinda voices her frustration and anxiety about the “huge drop” in her 401K. She tells Gloria that when she expressed her concern to HR, they explained that such fluctuations are “normal” due to the stock market. Gloria confesses she doesn’t even understand the stock market.

Moreover, as Melinda shares, she is only guaranteed this paltry money if she works another five years to reach the arbitrary age of full retirement. As Melinda knows, the company is incentivized to not keep her that long. And indeed, Melinda is fired. She leaves the office with all of her belongings packed into two cardboard boxes. Melinda walks out of the story devastated, a financial tragedy that will likely unfurl in silence and secrecy. Although earlier in the movie, Gloria assures Melinda that “they’re in this together”, this show of worker solidarity proves fleeting. The crushing conditions of the economic present are too much to overcome.

To some extent, Gloria Bell is a generalizable character, embodying the living conditions of working-class alienation in late capitalism. Tellingly, Gloria Bell is a remake of the Chilean 2013 film Gloria, starring Paulina García. Lelio took his 2013 Chilean film and remade it, nearly scene by scene, in a US context. Indeed, the story of economic alienation is not particular to any single nation-state.

In both versions, Gloria Bell has no significant plot. There is no heroic character who transcends their economic conditions. All characters are caught in a ritual of deepening and tightening alienation and the pleasures of singing in cars and dancing at disco clubs are but temporary breaks.

The closest thing to a plot is Gloria’s complicated relationship with Arnold (John Turturro), a middle-aged, recent divorcée—at least that’s what he claims— who approaches Gloria at the disco bar and asks: “Are you always this happy?”

On the surface, in social settings, Gloria appears “happy”. She frequently wears a winning smile. When talking with her children, she is always cheerful, and when talking to clients, she is kind and patient.

But alone, at home, a sadness frequently manifests itself. Dancing is only a temporary escape from her alienated life.

In their burgeoning relationship, which is mired in secrets and silences, Arnold appears to have a normative life of middle-class masculinity. He is an ex-marine who currently owns an amusement park that markets itself as a space where men can perform aggressive forms of masculinity, such as paint-gun battles. As Arnold explains to Gloria, men will always like guns and always want to play war.

But even in this narrative of seemingly secure masculinity, financial struggle becomes manifest. As Gloria learns, Arnold’s two adult daughters are both unemployed and living with their mother who, it is implied, is also unemployed. In fact, their financial precarity is so pronounced that Arnold always picks up the phone when one of his daughters call, regardless of the circumstance, including moments of intimacy with Gloria.

This pervasive narrative of economic struggle is predominately shielded behind a facade of “everything is fine”, yet it manifests itself in various modes of alienation. This state of alienation pervades all aspects of life, including that of Gloria’s upstairs’ neighbor.

Throughout the movie, we hear Gloria’s neighbor who yells threats of harm and self-harm late at night. He is a man who lives alone and who needs help and care. Yet there are no resources and no institutions to help. He is alone, isolated in his room.

Analogously, when Gloria goes to an ophthalmologist, we learn that she has a degenerative eye condition in which her field of vision will continue to shrink indefinitely. Living alone is a potentially dangerous situation for Gloria. Like her neighbor, like all of us, Gloria needs others to survive and thrive. Yet she lives in a society that insists that we live alienated lives, divorced and deracinated from each other.

In their problematic courtship that dissolves over the course of the movie, Arnold reads Gloria a poem that he thinks is romantic: “Para Una Joven Amiga Que Intentó Quitarse La Vida“. The poem, by Chilean author Claudio Bertoni, translates as “For a Young Friend Who Intended Suicide“. While the poem may be construed as romantic, what I want to underline is the poem’s theme of self-harm.

How many characters in this movie, despite their smiling faces and joyous dancing, may be slipping down this dark path? How many amongst its viewers?