In Oliver Stone’s The Doors (1992) Ray Manzarek (Kyle MacLachlan) tells Jim Morrison (Val Kilmer) a story about his experiences working in the Hollywood of the late 1960s. He says he told a studio executive that he did not need a script to make a film. “Godard doesn’t use one,” Manzarek claimed. The executive replied, “That’s great… Who’s Godard?”

By the late ’60s, Jean-Luc Godard was a legend among young cinephiles. Beginning with Breathless in 1960 and ending with Weekend just eight years later, the caustic former Cahiers Du Cinema film critic made 15 films which can only be described as revolutionary. Both in terms of cinematic form as well as political and personal content, these films broke the old rules while inventing new ones. The use of handheld cameras, jump-cuts, natural light, and improvisation were both old and new things he popularized. Many of these ideas were used during the freewheeling days of silent cinema before filmmaking was industrialized and, in the mind of Godard and his “New Wave” colleagues, fossilized.

Godard wanted to provoke. But unlike some of his more didactic later work, these initial films are playfully provocative. Most of them are defined by their adversarial relationship to popular movie genres. Breathless is Godard’s deconstructed take on the crime film. A Woman is a Woman (1961) is his musical comedy.

Alphaville (une étrange aventure de Lemmy Caution) (1965) is two genres for the price of one: science fiction and noir. Maybe it’s even a third genre as well. It can be argued that the film is just another Eddie Constantine “Lemmy Caution” flick. “Lemmy Caution” flicks were big business in France since the ’50s, and Constantine played the role in over a dozen of them. Created by British pulp novelist Peter Cheyney, Caution is either an FBI agent or a private detective, depending on which novel you read, but it doesn’t really matter. He’s less a character than a genre archetype and it’s the archetype that Godard wanted. Especially one that was already lost in translation: British novels about an American detective adapted into French films starring an American actor speaking French.

Constantine was synonymous with the role, so Godard simply dropped him like a found object into his dystopian science fiction plot. The old fashioned tough guy Lemmy Caution does not belong here. His simple macho values and violent responses are hilarious when placed into this new context. In one scene, he shoots and kills a man then attempts to question him. Caution appears to have no idea what question to ask anyway, as his bizarre mission pits him against a fascist sentient computer called Alpha-60, which rules Alphaville and forbids any expression of emotion. Caution is deadpan but filled with primitive emotions both violent and romantic. It’s no surprise that Godard considered calling the film “Tarzan Versus IBM”.

By the end of the film, Caution gives up trying to understand the computer’s semantic games and resorts to his base instincts to bring Alphaville down. Along with using his fists and a .45 automatic, Caution expresses love for Natacha Von Braun (Anna Karina), the daughter of Professor Von Braun aka Leonard Nosferatu (Howard Vernon) — the man who built Alpha-60. Natacha grew up in Alphaville and does not know the meaning of words like “Love”. Caution challenges her to understand the meaning and challenges Alpha-60 by telling it a riddle that it cannot possibly comprehend.

From this description, the film may seem like a cold intellectual exercise. A film made by Alpha-60 itself. But this isn’t the case. I find Ridley Scott’s Blade Runner (1982), which is obviously inspired by this movie, to be a much colder experience. Alphaville is one of Godard’s wittiest and most emotionally moving. The pulpy sci-fi plot acts as a warm coat of familiarity as Godard slyly subverts one genre trope after another. Godard never really stopped being a film critic. His films were as much essays on how films worked as they were films themselves.

So Godard reveals the artificiality of B-movie fight scenes by presenting them as a series of posed comic book stills and gives Caution melodramatic theme music, which turns abruptly on and off at the most dramatically incorrect and hilarious moments. The excellent score by Paul Misraki shifts from this intentionally clichéd thriller music to beautiful and haunting pieces full of romantic longing. 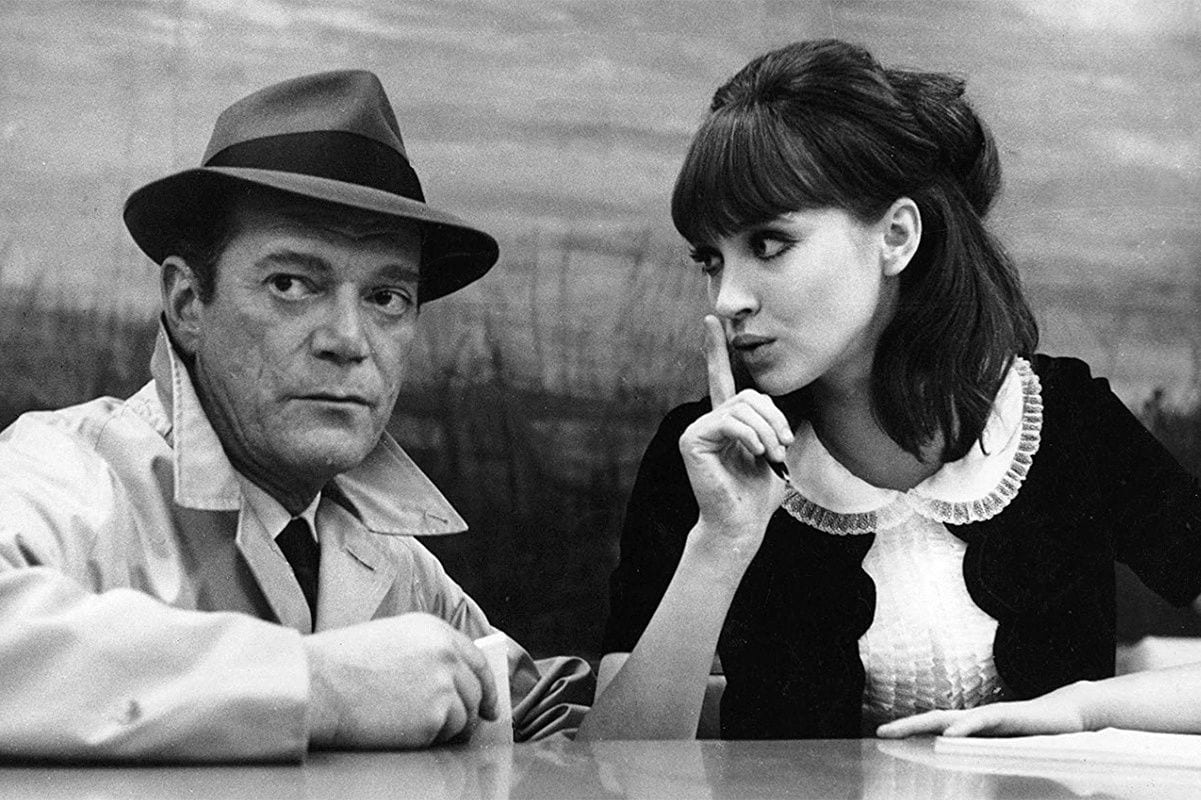 This romantic theme is used most effectively at the end of the film, a scene which is a perfect example of what fellow French New Wave director Francois Truffaut called a “privileged moment”; brief moments in cinema when the film captures something intangible in a way no other art form could. As Misraki’s score builds, Godard holds on a lengthy closeup of Anna Karina, whose eyes are as hypnotic as any performer in film history. Karina’s expression slowly and subtly shifts from cold to warm and she ends the film by speaking the words she could not comprehend earlier: “Je vous aime…”

The newly restored 4K Blu-Ray is yet another fantastic release from the folks at Kino-Lorber. Raoul Coutard’s stunning black and white cinematography has never looked better. Coutard pushed his experiments shooting in low light to an extreme here. The night exteriors, which were muddy in many previous releases, are wonderfully inky and dark without being crushed into complete black. The film looks clean but not without natural film grain.

The extras include the original trailer and an introduction by critic Colin MacCabe, who discusses where the film sits in the context of Godard’s career and in the genre of science fiction itself. An interview with Anna Karina is only flawed because it is too short. Karina discusses Godard’s working methods, Coutard’s fears that he may have gone too far with the lighting or lack thereof, and her work in the film. Karina was the spark that gave these early Godard films their vitality and his work never really recaptured it once their personal and professional relationship was severed.

But the best extra is novelist and film critic Tim Lucas’ commentary. Lucas’ commentaries are always insightful, incredibly well researched and entertaining, and this is no exception. Along with his smart analysis of the film’s thematic contents, Lucas points out the many clever techniques Godard used to create the future world of Alphaville by shooting in specific modern locations around Paris and using sound to create an uncanny atmosphere. The film remains a masterclass in how to make a low budget science fiction film.