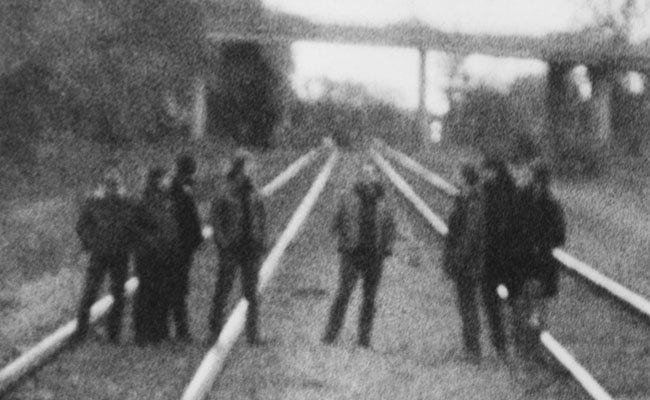 The seven-year-long hiatus Godspeed You! Black Emperor went on was a period highlighted by the void they left behind. Having released three albums before, with the exceptional Lift Your Skinny Fists Like Antennas to Heaven standing out, the band moved into a period of hibernation. The results of this break came to fruition in 2012, with the group’s new album ‘Allelujah! Don’t Bend! Ascend!, a record that rivaled the quality of Lift Your Skinny Fists Like Antennas to Heaven, which needless to say was a herculean task.

The return however also signaled a period of change for Godspeed You! Black Emperor and this became more apparent with Asunder, Sweet and Other Distress. The band’s shortest album still featured all the qualities associated with its earlier works, from the massive crescendos to the drifting drones, from the ethereal atmosphere to the heavy riffs, but it presented them in a condensed fashion. The new album, Luciferian Towers, carries down this path with a more adventurous outlook, as the band reconfigures its sound with a different focus.

That is not to say that the band has changed its style, but rather that it is going through a process of evolution. The main aspect that has changed is that Godspeed You! Black Emperor doesn’t run with the same force and energy it used to. The promise of the famed post-rock crescendos, violent and heavy outbreaks after an intense build-up, is never fully delivered in Luciferian Towers, despite the heavy riffs of “Bosses Hang Pt. I” or the acceleration of the repetitive patterns in “Bosses Hang Pt. II” and especially “Bosses Hang Pt. III”. Considering the political edge the band has always chosen to focus on, with its raging anger towards capitalism and neoliberal notions, it is rather a strange stand that it takes when it comes to the progression and weight of Luciferian Towers. It is a living contradiction in itself, and one that becomes more and more intricate as the album unfolds.

Instead, Godspeed You! Black Emperor explores the melodies and harmonies that can exist in its concepts. And that’s what makes Luciferian Towers by far the most melodic work the band has ever released, with the first two parts of “Anthem to No State” highlighting this notion entirely. This conscious choice is implemented perfectly by the stunning lead work, arriving with so much emotion, as Sophie Trudeau’s violin performance particularly contributes to this monumental effort.

Despite the nurturing of melody, elements of experimentalism still run rampage in the music, as has always been the case with the band’s vision. Constructing grand atmospheres, making use of feedback loops and audio effects, the band creates this stunning void comprised of dissonance. Clashing with the melodic qualities of its music, the two elements reach a higher, richer sonic dimension, with Godspeed You! Black Emperor channeling all its creativity to complete this extravagant trip. That is particularly felt in the only slight outbreak of the record, the ending part of “Anthem For No State Pt III” where the band compromises between its heavier self, filled with an upbeat drum pace and the feedback frenzy, alongside the excellent lead guitar parts. It is the closest thing to chaos Luciferian Towers brings.

Luciferian Towers finds Godspeed You! Black Emperor in a strange place. When the group released ‘Allelujah! Don’t Bend! Ascend!, it seemed like the path which opened with F # A # ∞ was still in place. But since Asunder, Sweet and Other Distress and especially now with Luciferian Towers, the ensemble is in a moment of transition. Hanging on to individual elements of its past, Godspeed You! Black Emperor is slowly reinventing its sound, working on its intricacies and dynamics, focusing on different elements and trying to awaken different emotions. Even though it doesn’t seem like this is the end of this road, the process has already borne fruit in the case of Luciferian Towers and presented a different facade. But it feels there is still ground to cover to reach the end goal, and that is very promising.