The next time Godzilla awakens from his radioactive slumber, the first thing he should smash is his agent. Godzilla: King of the Monsters is a disappointing entry into the embattled kaijū’s filmography. There are fleeting moments of glorious monster combat, but director Michael Dougherty is too preoccupied with the boring melodrama of his human cannon fodder to give us the consistent schlock that we crave. Yes, we’re way beyond men in rubber suits, but we’re still just looking for a silly good time. In the words of the great Ken Watanabe, “Let them fight!”

You can forgive fans of the classic Godzilla films for being excited about their favorite monster’s latest revival. Director Gareth Edwards’ Godzilla (2014) wasn’t exactly a classic, but Edwards showed a good feel for the original Toho Company story formula. Human catastrophe served as the connective tissue between epic monster fights, while Bryan Cranston provided the compassionate heart of the film. It also marked the inauguration of Legendary Pictures’ so-called ‘MonsterVerse’, which seeks to translate iconic monsters such as King Kong and Godzilla into modern action extravaganzas.

Edwards’ change of heart about returning for a sequel opened the door for director Michael Dougherty (Krampus, 2015) who, unfortunately, fails to convert on the momentum of his predecessor. Instead of creating a new mythology about a world humbled by the existence of previously-unknown monsters (dubbed ‘Titans’), Dougherty just recycles the tired ‘disengaged dad struggles to reclaim his family’ premise. Calling the plot of Godzilla: King of the Monsters stale would be an insult to the fossilized potato chips hiding between your sofa cushions.

Mercifully, the charismatically-challenged Aaron Taylor-Johnson does not reprise his 2014 Godzilla role of ‘Turgid Action Man’. Instead, the always solid Kyle Chandler steps into the lead role as Mark Russell, a father who traded his wife (Vera Farmiga as Dr. Emma Russell) and daughter (Millie Bobby Brown as Madison) for a bottle of booze after Godzilla accidentally pancaked his young son back in 2014. Ken Watanabe (Dr. Serizawa) and Sally Hawkins (Dr. Graham) return as representatives of the shadowy organization Monarch, which seeks to protect the Titans, even as Admiral Stenz (David Strathairn) is hell-bent on destroying them. 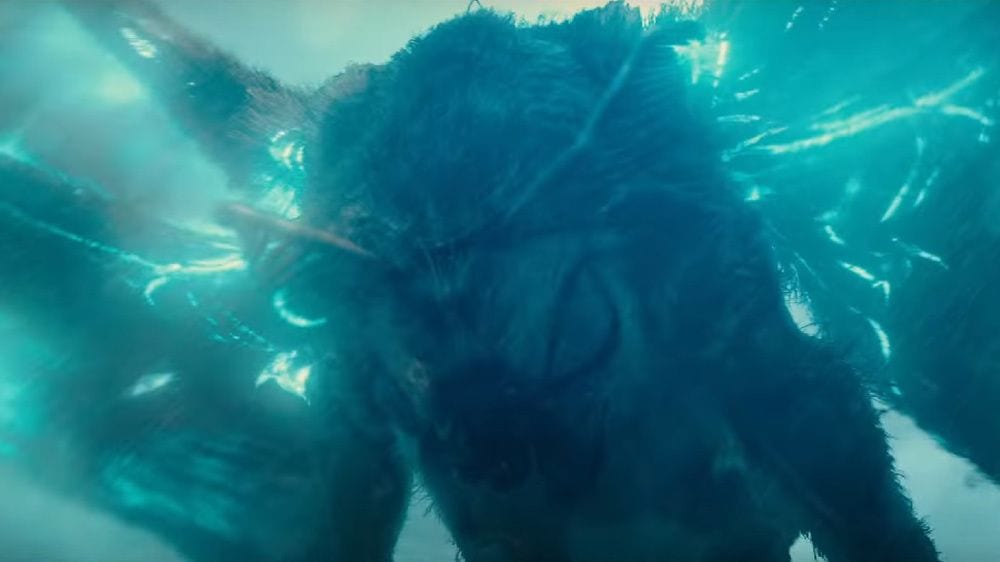 The most ridiculous (and delightful) elements of the story revolve around ORCA; a “bio-sonar” device created by Dr. Russell to mimic the communication sounds between the Titans. When the ORCA, Dr. Russell, and Madison are kidnapped by an eco-terrorist named Jonah (Charles Dance), Mark joins the Monarch team to track them down. Jonah wants to unleash all of the Titans in an effort to counterbalance the swelling ranks of humanity. Basically, he’s like Thanos from Avengers: Endgame (Russo Brothers, 2019), only much more English.

Dr. Russell shows off her ORCA prowess by placating an angry Mothra, newly freed from her throbbing chrysalis. Oh yes, did we mention that Mothra is a she? Apparently, she and Godzilla go way back, though we are free to speculate on the nature of their relationship (this reviewer suggests they were High School sweethearts). Mothra is easily the highlight of Godzilla: King of the Monsters. With her shimmering wings and haunting cries, she provides the film’s only goosebumps when she emerges triumphantly from the clouds.

Beyond Mothra’s visual spectacle, this film is a surprisingly dreary mess. Whereas Edwards had the hutzpah to unleash his computer-generated Godzilla in harsh daylight, Dougherty conceals his monsters in perpetual rain. One is reminded of the disastrous 1998 Roland Emmerich version of Godzilla, which hides GINO (the disparaging moniker for Godzilla In Name Only) under a veil of darkness. The darkness in Godzilla: King of the Monsters is so overwhelming that it sometimes confuses the action. It’s difficult to tell, for instance, that a major character is actually killed. Making matters worse, neither the character nor their death is referenced in the remainder of the film.

An explanation for the rain and dark comes courtesy of the film’s primary villain; the three-headed alien beast called King Ghidorah. Ghidorah can apparently create weather systems (??), which allows it to circumnavigate the globe in its own private hurricane (“That’s not a storm!!”). These are the goofy plot devices that could make Godzilla: King of the Monsters a hoot were it not mired in all of the pointless drama surrounding the dysfunctional Russell clan. Will they get back together? Will Mark reclaim the trust of his daughter? More importantly, who will give a damn? We just came here to watch monsters fight, not slog through some rehashed family soap opera.

The major problem with this film isn’t even the lack of fighting between the monsters – we get a couple of juicy battle royals – but the lack of focus on the monsters themselves. In the classic Toho Company Godzilla films, human melodrama always dovetails with finding the monster’s weakness and formulating an audacious (and usually stupid) plan for victory. We know nothing of Ghidorah’s capabilities or special attacks. Much like horror films, monster movies function most effectively when we understand the villain’s abilities and can anticipate the danger. Here, we don’t understand why anything is happening because we’ve squandered all of our time on Mark’s quest to be a good daddy again.

Admittedly, the film picks up steam in its second half. We make a visit to Godzilla’s man-cave, and Admiral Stenz provides the film’s biggest laugh when he unleashes a super-secret oxygen-depleting weapon. This is the type of shameless nonsense that translates into a fun time at the movies. The finalé of Godzilla: King of the Monsters certainly provides a satisfying monster slugfest, but it needs more monster minutiae along the way.Note to the filmmakers: The Oscars won’t be calling; drop the faux meaningfulness and bring on the schlock!

Godzilla is a long-favored monster at PopMatters. Enjoy just a handful of Godzilla articles from our archives, here:

“Godzilla, Friend to the Children of the World” It was much easier to sleep at night knowing that Godzilla was out there patrolling the Pacific, dealing out serious beatings to any monster that dared disturb the world order.

“The Importance of Being Godzilla” Godzilla … is a mutable symbol, changing to suit the needs of the moment. He has become all things to all people.

“Hey Godzilla, Why Are You Such a Giant Cultural Symbol?” Distilling the actions of Godzilla to their most basic, one finds only an overgrown playground bully. What drives our love for this thuggish brute that annihilates our cities?

“Godzilla! Run from Your Lives!” Run from your lives from Godzilla 1998, a Hollywood monstrosity so absurd that it makes the film’s title song, Puff Daddy’s cover of Led Zeppelin’s classic “Kashmir”, seem like a good idea.