“I am scared. I am scared of how good this band is when it’s really good (sic), and we are somehow always on ice… I should choose my words more carefully… We are all on thin ice always, anyway,” Albarn quips with a big smile about two thirds into the show, refusing to open up too much about why his critically acclaimed supergroup has only produced two albums in over 11 years.

For a moment it seems as though the ever-political gob almighty is becoming emotional, as he laughs and shakes his head, taunted by Simon Tong to say more, but quickly snapping back into his flippant mode. “You don’t want to know more – familiarity breeds contempt!” he chuckles as he signals the band to kick off another song.

This final remark rings true – and hits too close to home, literally – throughout the sold-out show in Berlin’s Astra Kulturhaus, where 1,500 people of the median age of about 45 showed up on a warm evening to take part in the languid carnival of perpetual distress that is the Good, the Bad & the Queen. A once-nameless gathering of prominent musicians, consisting of Albarn, the Clash’s Paul Simonon, the Verve’s Simon Tong, and Fela Kuti’s Tony Allen who were erroneously identified as TGtBtQ because their debut album was named that, nowadays seem to embrace this name happily.

The band mostly referred to as “a project” by Albarn has cultivated a loyal and caring fan base with their first release in 2007. From the get-go, their subject was clear-cut: a quasi-documentary chronicle of the political and social decline of Great Britain. Accompanied by layered, but accessible melodies influenced by the Beatles, the Clash, the Specials, the “Entry of the Gladiators”, and everything in between, it was a sophisticated, yet radio-friendly version of a rancorous Guardian op-ed. 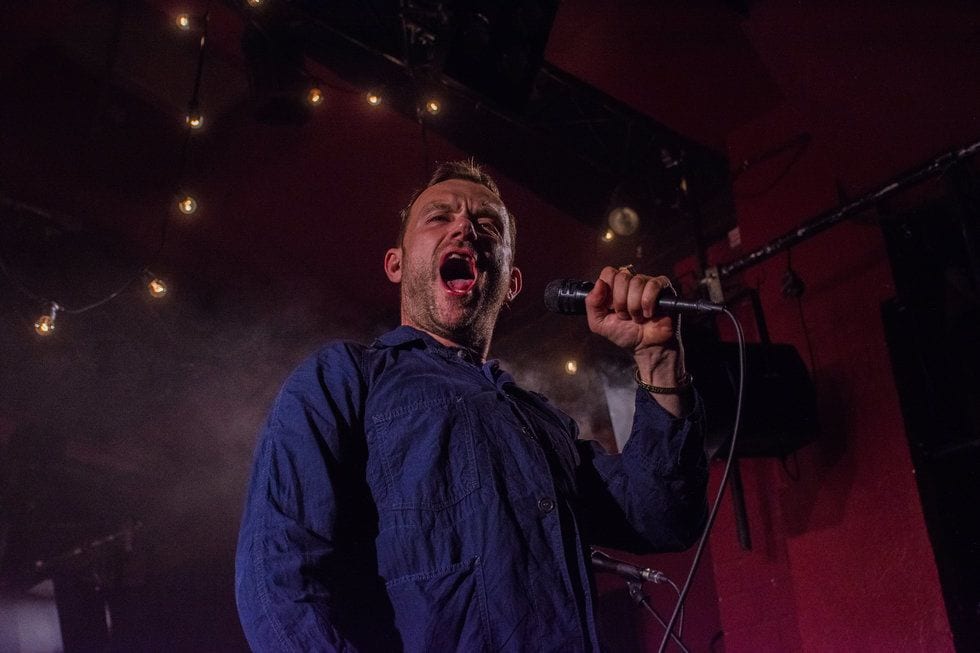 More than a decade has passed and Britain today finds itself in the most precarious of situations – an uncertain future caused by a muddled, overlong, and vitriolic breakup with the European Union. While to many Brexit, in hindsight, may seem like the inevitable, albeit deeply unsatisfactory, resolution to an uneasy affair, to Albarn it is all but synonymous with the apocalypse, be it of the collective conscious, or history itself. This sordid affair mobilized him to head right back into the studio with his famed collaborators, and with the help of the long-time David Bowie collaborator, Tony Visconti, deliver Merrie Land, a 37-minute-long lament over the decline of a relationship and disintegration of identity.

The cover, taken from the 1945 horror film, Dead of Night, shows an image of a ventriloquist (Michael Hargrave) taken over by his dummy. The dummy is also featured as an uncanny narrator of the videos for each tune, portentously announcing the nation’s demise with images from the English countryside and city life dancing in the background. Musically carnivalistic and Shakespearean in scope, the acclaimed release is laced with Leitwortstils and narrates a fast-unraveling sense of “Britishness” in the 21st century through the eyes of both collective (artistic) history and one middle-class man’s disillusionment in his surroundings.

Among the main themes of the evening is a properly John Bercowian “order, order, order!”, which Albarn shouts (back) at the jolly crowd every minute or so over a considerable period, mocking the incumbent speaker of the House of Commons. Set against two simple deep red lampshades and a drapery featuring birds ominously flying over the Tower of London, the band, with an extra percussionist, keyboardist, and a virtuoso all-female string quartet performs under a string of semi-luminous light bulbs. 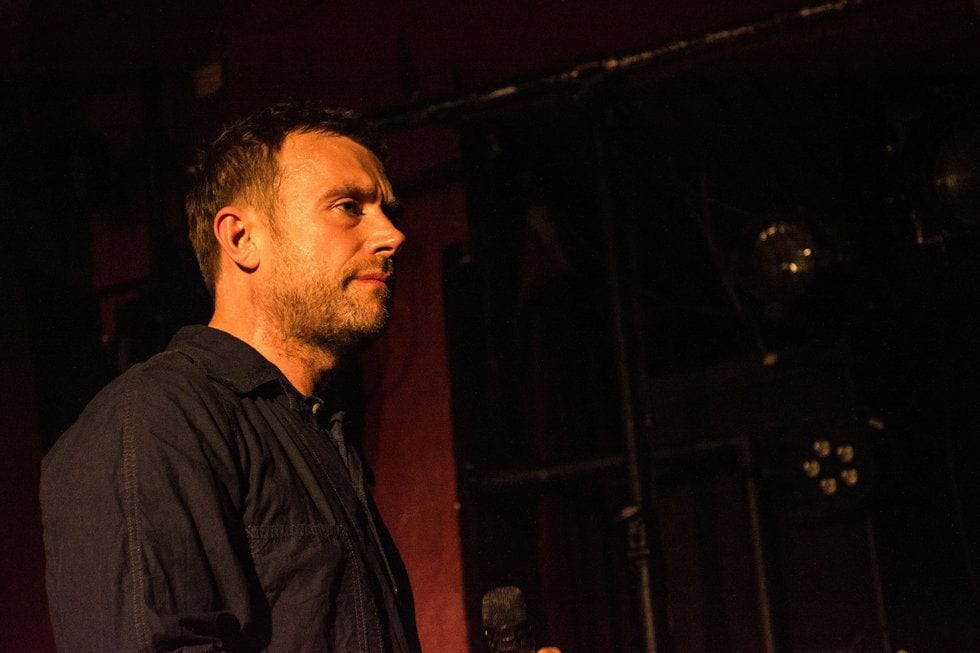 Chaucer’s prologue to the Canterbury tales blasts from the speaker and the entire multigenerational bunch is in good spirits, with Albarn effortlessly combining his legendary vocal melancholy with his infinitely jestful personal attitude. Every song from the new album, save for “Drifters and Trawlers” is performed in order, with the entirety of the debut release, except for “Northern Whale”, following. From the get-go, it is obvious that the intent is to provide a tender, yet politically charged performance, as the singer often interrupts his already overt tunes to underscore that “things in England are not good” and that the country is “sick in the head”. His German is perfunctory but understandable — he spent some time close to Frankfurt during a student exchange. Naturally, the crowd loudly cheers and follows every beat in the packed and humid venue. It would not be an overstatement to say that the majority of attendees are of British descent.

“Merrie Land” sets the tone appropriately, and we are faced with some of Albarn’s most direct and intimate singing. “This is not rhetoric; it comes from my heart,” he exclaims between verses about jubilee mugs, flags, seas, and Daneland. Facts and impressions mix potently here, and the crackerjack band is having lots of fun with the different melodies tightly woven together into something that can most closely be described as bazaar rock.

“Gun to the Head” gets the first big singalong of the night as the air inside Astra becomes too thick. “We don’t care ’cause we’re all animal lovers,” is an adequately tongue-in-cheek lyric, sung in ecstasy by hundreds of smiling fans (many of them sporting chunky beards). Still, “Nineteen Seventeen” brings out the first rhetorical query in which the subject of Albarn’s elegy becomes more ambiguous. “Are you still there, or am I losing you?,” is just one of the many questions asked without the listener knowing whether Albarn actually wants to know the answer, or who the question is aimed at.

This heartfelt delivery remains poignant to the end of the 100-minute show, and its juxtaposition with the politically bleak themes makes for a fascinating listen. “The Great Fire” and “Lady Boston” are, typically for Albarn, obsessed with the seas and the drab English shores, not to mention whales, who feature prominently in the band’s work. The latter sees him take to the piano for the first time during the evening and the tender chorus sinks in. The fadeout verse, “Dwi wrth dy gefn, dwi th dy gefen di”, written in Welsh and translating roughly to “we’re in this together now”, elicits another cheerful singalong from a crowd that does not seem too concerned about UK’s trade agreement with the EU at that moment.

“The Truce of Twilight” is another showstopper for the more introspective among us and a modern-day hair to Chaucer and his folk fables. “Ribbons” sees Albarn with an acoustic guitar and marks a solemn turn for the quiet outro that are the wonderful ballads, “The Last Man to Leave” and especially “The Poison Tree”, in which Albarn honors William Blake by sublimating murderous anger into peaceful, almost hopeful, acceptance. In this case, both Albarn and his beloved are “leaving”, and while the other person is being set free to commence with their pursuit of happiness, Albarn retreats to the poison tree by which he grew up, remarking how it’s all “really sad”. This song is another stellar example of vagueness where we are not certain who or what the narrator is talking about, but we still feel a profound sense of loss and hopelessness.

The second part of the show is dedicated to their first album, thematically similar to Merrie Land, but musically more slapstick and jam-ready. Here Albarn relies more on his signature melodica (I swear I heard Nirvana’s “In Bloom” at one point) and Simonon breaks loose with his tangy bass, making for a more upbeat show. A natural frontman, Albarn interacts with the audience heavily and at one point even slams his head into the piano while laughing uncontrollably. A lady from the front row brings him a present, while the gentlemen heckle his incessantly political speeches, this time around in English (as he announced he was “done” with German midway through the first part of the performance). 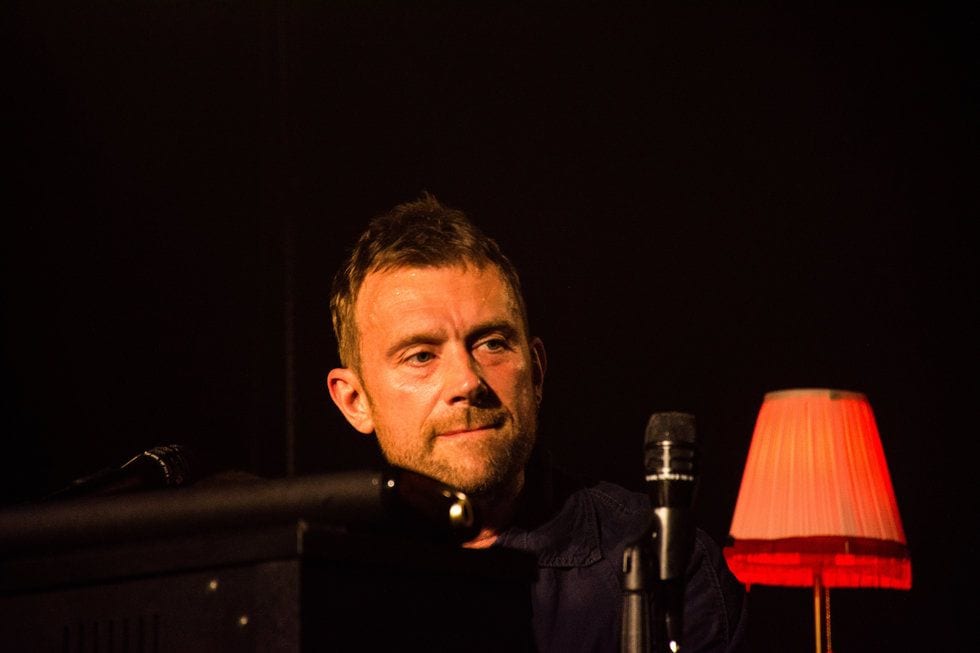 The old songs have aged very well, and “The Kingdom of Doom” is a brilliant highlight, where the ferocious end jam is laden with a “London Calling” riff (or so it sounds). Toward the end, however, the bleak narrative about love and (political) loss settles back in, and the overarching sentiment is too transparent to be dodged.

However, instead of sorrowful tenderness, by the end of the show, a bitter lump in our throats begins to metastasize as we grow to realize that, right here and now, Albarn is not taking Britain, or any of his other affairs, to court. He does not even begrudgingly retract into himself, which most people would do when faced with emotional turmoil. Whether in the UK or inside a relationship he has grown to resent, he simply stays and quietly observes the defeat and its imminent, omnipresent detritus, dreaming of change, but knowing he will never leave.

Be it true love or pathology, such commitment to the memory of the good and the attachment to an entity which has likely driven your life into the ground, is stoic and dependable, but not in the way traditionalist Tories may expect. As a “disobedient” and progressive citizen, Albarn is out of place with the history of his own country, but is, in fact, all the more valuable as a member of his society for it. Let’s just hope that he knows this, and that the will to change and see a better tomorrow will win within him, too, in the end.