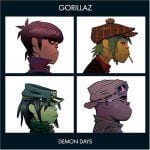 Here’s why Gorillaz are very likely the best thing to ever happen to Damon Albarn:

Gorillaz are, as you likely know, a four-piece cartoon band made up of some of the more unsavory characters ever to come out of the dark depths of the animated underworld and unleash their music upon an unsuspecting public. All right, so eight-year-old guitarist Noodle is kinda bubbly and cute, but none of Gorillaz’ members could possibly be called anything close to mentally stable (if there is such a thing for a cartoon) — even Noodle is fighting her past as a member of a junior fighting militia. There’s a pic in the Demon Days press pack — freely available on the website, if you can find it — that features lead cartoon vocalist 2D with his (pardon the term) wang visibly hanging right out of his pants. It’s the ultimate display of “I don’t give a fuck”, and I have this feeling that Albarn was just a little bit giddy that Gorillaz uber-illustrator Jamie Hewlett could draw Albarn’s closest illustrated counterpart letting it all hang out.

Taken to a higher level, what 2D’s public display of the goods proves is that Albarn can do whatever the hell he damn well pleases as Gorillaz, while not necessarily taking responsibility for any of it. It’s why he can crib the entire verse melody of U2’s “Staring at the Sun” and use it for the chorus on his album’s lead single. It’s why he can pen a volcanic little fantasy and get Dennis Hopper to read it on one of the deeper tracks on that same album. It’s why he can have an entire album of vocal tracks without ever feeling constrained by the necessity of writing anything with a “deeper meaning”. Demon Days is part two of what will undoubtedly be an ongoing romp into the absurd, except that Albarn will rarely be chastized for such obvious self-indulgence; after all, he’s just writing parts for his characters, right?

Even given all of the above, however, there is a major difference between Albarn’s first attempt at avant-pop-via-cartoon and his second. Gorillaz, the self-titled debut, actually played like a prolonged experiment, a test for Albarn to see how far he could push his own boundaries, and a test for his audience to see what exactly would be accepted as legitimate music and what would be dismissed as noise-collage drivel. Demon Days has a similar guest list to its eponymous predecessor, as varied and unexpected as any you’ll see in pop music today. Somehow, though, Albarn and his new cohort Danger Mouse (who replaces the quickly fading-in-relevance Dan the Automator) have managed to develop something resembling a cohesive statement from parts as disparate as Neneh “Buffalo Stance” Cherry, Dennis Hopper, Martina Topley-Bird, the London Community Gospel Choir (because every true exercise in self-indulgence needs a gospel choir attached to it), and Ike Turner. Yes, you read right. Ike freaking Turner.

I have these images of Albarn calling someone like Ike Turner up on the phone and saying something like “Hey, Ike, wanna play piano for my cartoon band? It’ll mean some mad hipster points for you, bruh.” These images entertain me for hours.

Back to Demon Days.

Given that the lyrics are barely coherent and basically there as a vehicle for the “members” of Gorillaz to make noise with their mouths, for their album to be thought of as anything remotely worth hearing more than once, it’s got to have it totally going on in the music department. Demon Days has exactly that, providing its listeners not with a story arc, but a “music arc”. You see, the music of Demon Days, starts off slow, and honestly, not all that strange. The first few tracks of Demon Days make the album sound a bit like the Casioed version of a mid-’90s trip-hop album, with the occasional foray into things like McCartney-esque piano pop (“Last Living Souls”) and breaks for string ensembles (“Dirty Harry”). It’s on “Dirty Harry”, however, that a shift takes place — not only is it a sequel in name to Gorillaz‘ “Clint Eastwood”, it also introduces the hip-hop with an appearance from Bootie Brown, not to mention the strings and the gospel choir. Even with all of these disparate elements coming together, it’s a cohesive tune with a great beat that serves as an accessible introduction to the experimentation of the rest of the album.

Past “Dirty Harry”, Demon Days gradually busts at the seams with musical ideas and in-song transitions. MF Doom makes a typically fantastic appearance on “November Has Come”. The Happy Mondays’ Shaun Ryder (Shaun Ryder!) gives a nice, detached vocal on the new wave wannabe “Dare”, which would make prime second single material, odd as it is. There’s a foray into dancepunk on “White Light”, though I don’t know that, say, The Rapture have much competition in Gorillaz. Most impressive of all of it is “All Alone”, which starts as a dirty, skittery hip-hop joint starring Roots Manuva, and turns into an ethereal cloud of lovely featuring the incomparable Martina Topley-Bird. If anything could once be uncharacteristic of Gorillaz, that lovely coda shoots down the idea that anything short of a country hoedown could possibly achieve unpredictability on an album such as this.

Demon Days is a tribute to the shared genius of Albarn, who has the creative vision, and Danger Mouse, who brings the noise. Danger Mouse is particularly brilliant in that he seems to know exactly what sounds he’s going to need to use to keep the whole thing from falling apart at any given moment — it’s why a sunny tune borrowed from Brian Wilson’s brain can make sense as a follow-up to Dennis Hopper’s spoken word, and lead directly and effortlessly into a Gospel-infused reggae jam that happens to share its title with the album it’s on. The point is, that even without words that mean much of anything, the music of Demon Days (of which those words are a significant part) is enough to evoke. What exactly it evokes is open for debate (even if the general undercurrent of impending dread is not), though trying to resolve that debate is proving to be one of the most unique pleasures the year has offered thus far. Demon Days is fantastic.