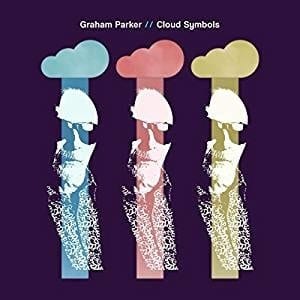 Most of us live in a world where electronics have become a quotidian part of our mundane daily existence. This is especially true of the smartphone. Check out the animated video for Moby & The Void Pacific Choir’ “Are You Lost in the World Like Me” for a dark social take on this scenario. Or you could put down your smartphone and look around? Depending on where you are, you will see what I mean. Graham Parker keenly observes his own emotions and the behaviors of those around him. He knows if he needs to know the weather conditions, all he has to do is check an app. While we can get more accurate information quicker than ever before, there is something lost. Instead of using our senses, we abstract ourselves from experience. We live a mediated existence.

The title of Cloud Symbols comes from the narrator looking at the weather report on his phone. “Is the Sun Out Anywhere”, he asks sadly. He looks and sees rain everywhere, Rome, Paris, in his love’s heart. The cloud icons represent his melancholy state of mind. This detail suggests the pettiness of the protagonist. He may shed a few tears, but he finds his heartache comforting. He doesn’t feel deeply, which makes him an even sadder person in Parker’s view. As Parker fans know, “Passion is no ordinary word.” Ironically, instead of feeling sorry for the protagonist he finds him a bit of a jerk who plays with his phone instead of living a more authentic life.

And none of this would matter if Parker didn’t have such an interesting, soulful voice. Something is compelling about the way he sings that makes everything he croons sound important. Parker doesn’t offer pronouncements in the traditional way. It’s more like he’s that person at the bar who pays for your drinks without any expectation except you listen to his stories. And they’re good stories. He’s ably backed by the Goldtops (Martin Belmont, Geraint Watkins, Simon Edwards and Roy Dodds) and accompanied by the Rumour Brass on six tracks. They are the jukebox that plays in the background that enhances the atmosphere.

Parker originally conceived Cloud Symbols as “conceptually consistent album” when tragedy struck in the middle of its recording as its engineer/producer Neil Brockbank died suddenly of cancer. With the help of one of Brockbank’s assistants, Tuck Nelson, Parker finished recording the album, which is dedicated to Brockbank. It’s difficult to discern common themes on the surface level of these tunes, such as the rollicking ode to intoxication “Bathtub Gin” to the coyly crude “Brushes” (re: “I love to eat the oyster around the pearl / I love to eat the meat around the pearl” may be the strangest metaphor about cunnilingus in recent times) to the sweet tribute when “Love Comes”. What ties them together is Parker’s biases towards strong feelings and the desire for genuine involvement. Perhaps the fact of Brockbank’s death heightened these existential emotions.

That doesn’t mean one has to go out, get drunk, and howl at the moon—although I doubt Parker would object to that behavior. Sometimes it means spending “Every Saturday Night” alone and mooning for a lost love. If that’s the way one feels, don’t go out and fake it. Even “Dreamin'” is better. Or as he creatively puts it, “Streamin’ yes I’m streamin’, cuz video is something demeanin'” — i.e.: feel it in the here and now instead of archiving it in the back of one’s mind. That’s what he’s always preached. After 24 studio albums Parker is still singing the same song, but like a good whiskey he retains his character and is worth coming back to for more.