The Grateful Dead released their self-titled debut album in early 1967, but most fans agree that it was a false start. It was a tame, more studio-friendly version of the type of sound that would make them legendary. Bassist Phil Lesh, in his autobiography Searching for the Sound, admits that “to my ear, the only track that sounds at all like we did at the time is ‘Viola Lee Blues'”.

It was time for a reset; a bold statement that would test the patience of producers and record company executives. Opting for more advanced recording studios in both Southern California and New York City, the San Francisco-based band began recording in the fall of 1967 what would become Anthem of the Sun. Synonymous with the late ’60s psychedelic sound and among the trippiest 39 minutes committed to tape by a household name, Anthem was released in July 1968 and is the subject of a 50th-anniversary deluxe edition from Rhino, the granddaddy of reissue labels.

In addition to the original 1968 mix, this new edition of Anthem includes the beefed-up 1971 mix supervised by Lesh (supposedly for the benefit of newly minted fans who were turned on to the band after the hugely successful, more folk-oriented 1970 albums Workingman’s Dead and American Beauty). Additionally, there’s previously unreleased live music in the set, specifically an October 1967 show from San Francisco’s Winterland. This show is particularly relevant in that it’s the first recorded live set featuring the Grateful Dead’s second drummer Mickey Hart, whose pairing with original drummer Bill Kreutzmann provided a unique, exotic form of syncopation that would help define the Dead’s music for decades.

Hart wasn’t the Dead’s only new blood during this time. Keyboard player Tom Constanten – a former college pal of Lesh’s who shared the bass player’s penchant for avant-garde experimentalism – was brought on as a sort of yin to organist Ron “Pigpen” McKernan’s more blues-based yang. With guitarist/vocalists Jerry Garcia and Bob Weir rounding out the roster, the next phase of the Grateful Dead was ready to roll.

Anthem of the Sun comes out of the gate swinging – the band’s ambition is obvious right away as the opening track, “That’s It For the Other One”, clocks in at more than seven minutes and is divided into four oddly titled sections: “Cryptical Envelopment”, “Quadlibet for Tenderfeet”, “The Faster We Go, the Rounder We Get”, and “We Leave the Castle”. Moving around between baroque melodies, Lesh’s typically chunky bass lines, over-the-top guitar distortion and bluesy swing, this first song is a profound statement that sees the band inching closer and closer to psychedelic legend status (with the multi-part “suite” nature of the track giving the album a mild prog rock feel). Eventually, the song descends into chaos, finishing with a drawn-out “final chord” that sounds “A Day in the Life” filtered through the Mothers of Invention.

“That’s It…” collapses, exhausted, into “New Potato Caboose”, with Weir’s vocals providing a light touch to the jazzy tempo, moving deliberately through the hallucinatory lyrics (“Last leaf fallen bare earth where green was born / Black Madonna two eagles hang against a cloud”). Eventually, Garcia takes a lengthy guitar solo, introducing his inimitable style to the world, while the following track, “Born Cross-Eyed” is Weir’s moment in the sun as his first solo songwriting credit. Anthem may be interpreted by some listeners to be overly psychedelic a bit of a hot mess, but it does an excellent job of laying out the Dead’s many different facets. In a sense, it’s a mission statement.

Not content to make cut-and-dried studio albums, Anthem sees the Dead mixing studio recordings with live music, a technique used best on the second side. Here, Pigpen brings the band back to its blues roots with a pair of lengthy jam-friendly excursions. “Alligator” is an infectious, almost funky number with a backbeat that seems to predict their future classic “St. Stephen,” while kazoos(!) provide an extra layer of weirdness and the jamming starts to take off. Hart and Kreutzmann put the twin drumming to good use at the halfway point and Garcia’s soloing rises into the stratosphere. On the album’s closer, “Caution (Do Not Step on Tracks)”, Pigpen fully seizes the moment with lots of vocal riffing and blues tropes (“I went down to see the gypsy woman, you understand / I told her my story, I told her what was going on”). Pigpen lays it on pretty thick, but the album’s second half is a good way to bring the psychedelia down to earth (McKernan famously abstained from the rest of the band’s hallucinogens, preferring instead to consume prodigious amounts of booze, which ultimately killed him in 1973). 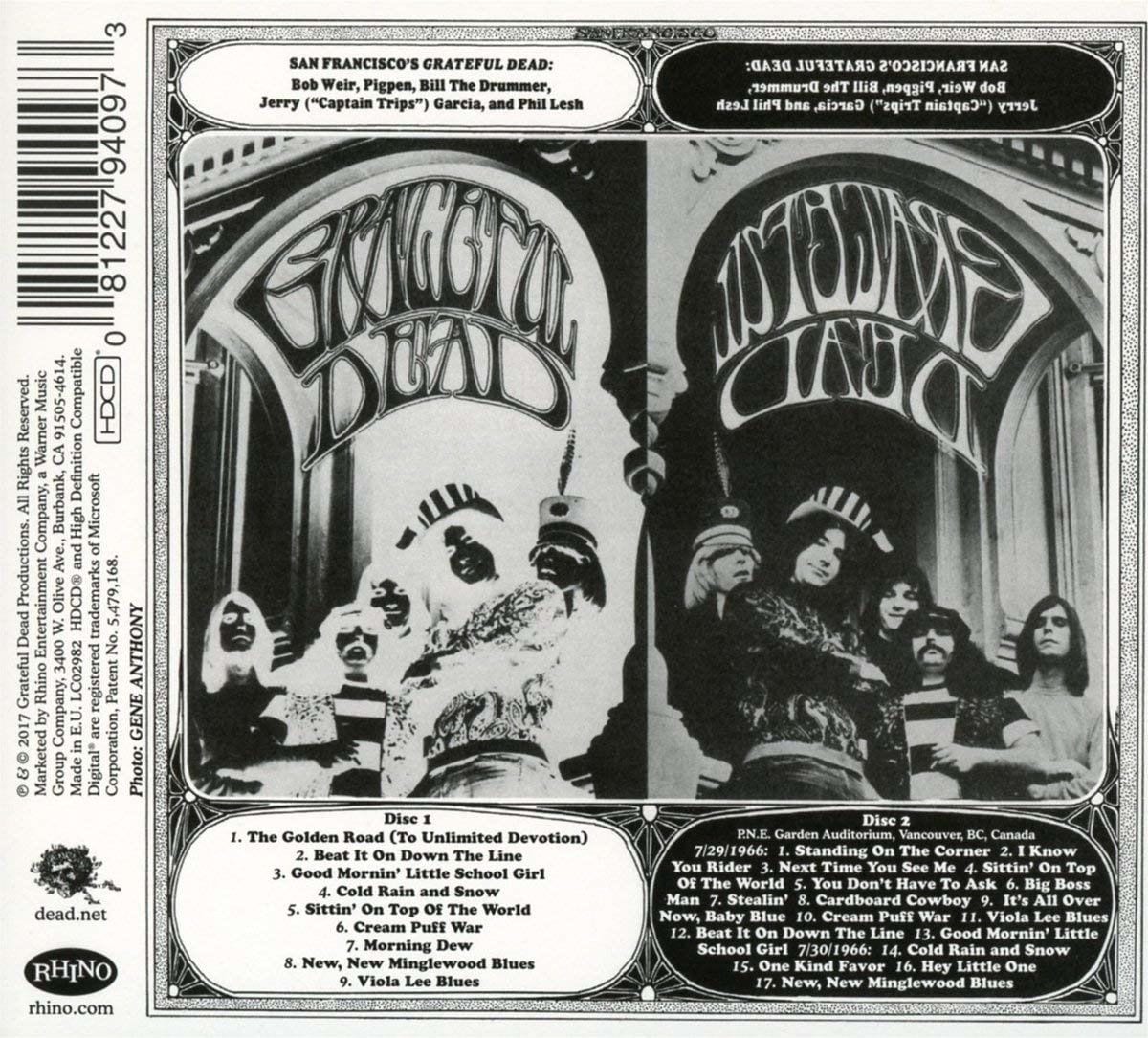 It’s important to note that the 1968 and 1971 mixes, both presented in this deluxe edition, aren’t necessarily earth-shattering in their differences. The latter sound is definitely beefier, and having both versions is probably only essential for completists and fidelity enthusiasts who enjoy geeking out on A/B audio testing. The real gravy here is the additional live disc, which captures the band at an important turning point with the addition of Hart. While not necessarily the finest moment of their 1967 gigs, it helps lay the groundwork for their signature sound. It also takes a few of the covers from their debut album (“Morning Dew” and “Cold Rain and Snow”) and stretches them out in typical Dead fashion. The former track, in particular, gives Garcia and Pigpen an opportunity to shine with spidery guitar licks and simmering Hammond organ weaving in and out.

As usual, Pigpen lets his mojo loose with what would become showcases for him for the next few years: a pummeling version of Elmore James’ classic “It Hurts Me Too” and a spirited, barrelhouse take on Bobby Bland’s “Turn on Your Lovelight”. The Winterland gig is also an opportunity for the band to road-test “That’s It for the Other One”, in a version that still sounds fresh and exciting without the future studio wizardry.

This new deluxe edition also comes with a lengthy, fascinating essay, “Anthem at 50: The Thousand-Petaled Lotus Opens”, written by Wired writer and contributor Steve Silberman, who also happens to be something of a Grateful Dead historian, having written countless liner notes for the band over the years. Even if you tend to overlook the textual supplements of boxed sets, this is an essential read for anyone interested in the album or the period in which it was recorded.

The Grateful Dead followed up Anthem of the Sun in 1969 with Aoxomoxoa, a slightly more toned-down, song-oriented (but still pretty trippy) effort, in addition to a fiery, now-legendary live album (Live/Dead) and two 1970 studio albums that deservedly shot up the charts (the aforementioned Workingman’s Dead and American Beauty). The Dead were on a roll, with years of albums and tours still ahead. But Anthem of the Sun is where things really took off. Rhino’s new deluxe edition is a reminder of how explosive and musically adventurous this band already was back in those early days.