There can be apprehension when approaching ‘feel-good’ films about painful subjects. Perhaps it isn’t fair to call veteran comedy director Peter Farrelly’s dramatic biographical debut, Green Book, a feel-good film – there are moments of genuine tension and emotional power – but despite its biographical subject, set amongst racial tensions in ’60s-era American South, the film bears all the sugary hallmarks of light entertainment. Thankfully, the chemistry between Viggo Mortensen’s rough, blue-collar Italian-American bouncer and Mahereshala Ali’s graceful, educated African-American classically trained pianist is enough to overcome your apprehensions. Although the plot may be sanitized and clunky, the story of Dr. Don Shirley (Ali) is a fascinating one, and certainly worth learning, even if filtered through Farrelly’s sweetened lens.

Tony “Lip” Vallelonga (Viggo Mortensen) is a good guy. Sure, he busts heads for a living at the Copacabana nightclub and cavorts with some of New York’s most infamous wise guys, but he loves his family and is a reliable provider. Oh, and he’s also a racist. He refers to African Americans as ‘eggplants’ and would probably drop several other choice epithets were Green Book not sanitized for viewers’ protection (rated PG-13). When his wife (Linda Cardellini as “Dolores”) offers some water to two black maintenance workers, Tony quickly retrieves the glasses and throws them away.

But Tony knows how to effectively ‘persuade’ people, which brings him to the attention of Dr. Donald Walbridge Shirley. Dr. Shirley is a virtuoso pianist about to embark upon a tour of the Deep South with his musical trio and he needs a man to handle his itinerary. Oh, and he also happens to be African American and the year is 1962. It’s safe to assume a man adept at the art of persuasion might come in handy under such circumstances.

It’s shameful that there was a time in America’s recent past when a book was required to guide African American travelers through the South. (What form, if any, does such a current guide take?) Jim Crow laws were still years away from being neutralized by The Civil Rights Act, which meant that black travelers needed

The Negro Motorist Green Book to advise them on the segregationist statutes enforced in Southern states. Knowing where you could drive after dark or which hotels permitted black lodgers was literally a matter of life and death.

This grim historical backdrop is the setting for what is basically a simple, albeit factual story about racial tolerance and cooperation between two very different men. It’s predictable that Tony, insulated from cultural diversity in his working-class Italian-American neighborhood, will gain new perspective into the unfair suffering of African Americans. There will be scenes where he objects to the treatment of Dr. Shirley and uses his streetwise savvy to save him from peril. He will grow as a man, incorporating the best parts of Dr. Shirley’s dignity and wisdom into his own life. Unfortunately, we’ve seen this kind of movie before and it’s usually condescending.

So what saves (just barely) Green Book from a similar fate? It all comes back to Dr. Shirley. His remarkable life almost sounds like the stuff of fiction. After starting on the piano at the age of two, the Jamaican-born musical savant was accepted into the Leningrad Conservatory and began his classical training at the age of nine. By the time he was 18, Dr. Shirley was performing with the Boston Pops. The title of ‘Dr.’could apply to any of the multiple doctorate degrees he received during intensive University study. He produced two dozen albums and was world-renowned for his virtuosity on the piano. As Tony reckons, he’s “like Liberace, only better.” 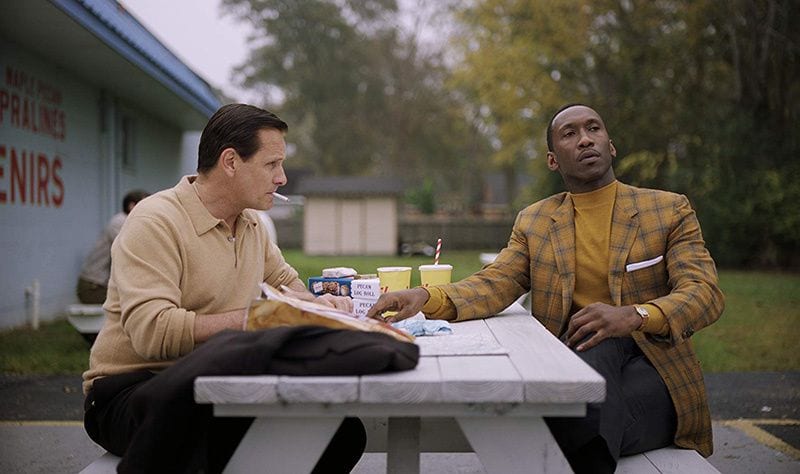 What makes Dr. Shirley even more fascinating, however, is his irreconcilable emotional paradox; he has spent the majority of his life living with and entertaining the people that refuse to acknowledge his humanity. It’s the only world that he knows. Meticulous in appearance and incredibly well-educated, Dr. Shirley is a man who can’t relate to the hardship and poverty prevalent within the black community. He isolates himself in a luxurious apartment above Carnegie Hall, drinking too much scotch and wallowing in self-hatred. When he and Tony walk into an African American bar, it’s debatable which of the two feels more out of place.

We don’t see complicated characters like this in movies; highly educated black men who are struggling with their identity, wondering where, if anywhere, they fit in. There’s an opportunity here to deconstruct the anger, confusion, and resentment that keeps Dr. Shirley from re-connecting with his cultural heritage. Unfortunately, that isn’t the movie Farrelly wanted to make. He wants to use Dr. Shirley as a vehicle of change for Tony. It’s always admirable to promote racial empathy, particularly when ‘driving while black’ is still a risky proposition in America, but it feels like a simplistic objective for such a complicated subject. The choice becomes, then, lamenting the film that could have been, or trying to embrace the director’s artistic vision.

It’s the chemistry between Mortensen and Ali that makes Farrelly’s vision palatable. Yes, Green Book employs plenty of road trip clichés — Tony and Dr. Shirley reluctantly teach one another valuable life lessons in the broadest way possible — but the comical digressions of this decidedly odd couple are enough to keep you chuckling. Tony, who eats more like a mindless machine than a sentient human being, delights in the prospect of eating Kentucky Fried Chicken in the state of Kentucky. “When’s that ever going to happen!” he exclaims. You can’t help but laugh at Dr. Shirley’s exasperation over Tony’s lack of couth, including a scene in which he hilariously shames Tony into returning a stolen item from a roadside tourist trap. There’s nothing groundbreaking here, but watching the evolving camaraderie between these headstrong men is a pleasure.

Ultimately, celebrating an interesting character like Dr. Stanley outweighs the mishandling of his story. Even if Green Book functions on the level of American Race Relations 101, perhaps it will strike a non-threatening chord with the people who most need to see it. General audiences who would never watch a Spike Lee film or indulge an edgy social commentary like Sorry to Bother You might flock to the cozy confines of Green Book. Its pleas for empathy and elevated social awareness are admirable, even if the jagged edges and racial tensions have been smoothed over.