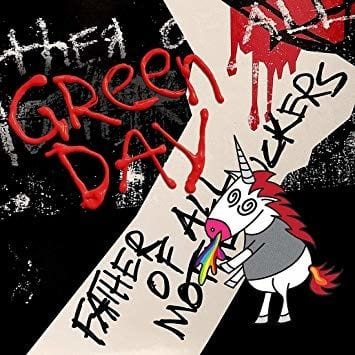 Green Day have been struggling to stay relevant, necessary, and exciting for at least a decade. Granted, even 2004’s American Idiot divided longtime fans, with some people lambasting its commerciality while others—like myself—championed its ambitious conceptual poise. Yet, everything afterward was either a second-rate repeat of that brilliance (21st Century Breakdown and Revolution Radio) or a desperate attempt to reclaim their earlier punk edge while latching onto other been there, done that styles (2012’s triple threat of ¡Uno!, ¡Dos!, and ¡Tré!). None of them were bad, per se, but they also weren’t especially new or compelling, coming across most like slightly reskinned copies of the same schtick.

Unsurprisingly, Father of All pretty much suffers an identical fate, with the trio doing their best to appear as vibrant and provocative as ever. Even its cover and full name, Father of All Motherfuckers, seems aimed directly at the far younger Hot Topic crowd. Plus, frontman Billie Joe Armstrong has described the record as being about “the life AND death of the party… [and] the lifestyle of not giving a fuck”. They can play as well as ever, and Armstrong’s trademark voice remains intact, but there’s very little here that comes across as memorable or monumental. Rather, it’s another sequence full of common tropes and techniques (to the point of plagiarism in some cases), and at only 26 minutes in length, it rushes by without leaving much of an impression.

There are some catchy tunes here, with the title track kicking off the LP—or would it be EP?—via a characteristically high-energy anthem. In a nutshell, it’s the same sort of chords and rhythms they’ve been doing for ages, but with a tinge of Bowie and Bolan-esque glam rock in the form of falsetto singing, handclaps, and glitzy guitarwork. Its segues seamlessly into ” Fire, Ready, Aim“, whose aesthetic mirrors its predecessor so much that it feels like the second half of the same song. Together, they provide an infectious punch, no doubt, but one that’s entirely disposable, familiar, and ironically mainstream, too. Beyond that, “Meet Me on the Roof” has a tinge of 1950s rock and roll danceability and sleekness that’s somewhat appealing.

Regrettably, nearly all of the other tunes offer even more overtly recycled approaches. In particular, ” Oh, Yeah!” shimmers with minimal zeal, choosing instead to center on Green Day’s now-cliché tale of adolescent angst, rebellion, and metaphor. “I got blood on my hands in my pockets / That’s what you get turning bullets into rockets / I am a kid of a bad education / The shooting star of a lowered expectation.” Likewise, the blandly formulaic “I Was a Teenage Teenager” finds Armstrong singing, “My life’s a mess, and school is just for suckers” before the equally run-of-the-mill “Take the Money and Crawl” explodes with sophomoric kiss-offs like “You can take a walk / Or you can suck my cock.” It’s not so much the tone or language that’s the problem; it’s that Green Day have said it all before (and far better), and the fact that they’re still relying on the same juvenile calls-to-action in their late 40s is kind of sad.

Arguably the worst offenses come with the outright copying of themselves or others. The artwork of Father of All is the American Idiot cover with some early 2000s emo-punk graffiti, so perhaps it’s not shocking that “Sugar Youth” is eerily close to “She’s a Rebel” (to the point that he sings, “I got a feeling, and it’s dangerous” exactly how he sang “She’s the salt of the earth / And she’s dangerous” back in 2004). Next, “Junkies on a High”—like “Restless Heart Syndrome” from 21st Century Breakdown—is just a modified version of the far superior “Boulevard of Broken Dreams”. As for closer “Graffitia”, it’ll just remind you of its better incarnation, “We Are the Waiting”. Also, “Stab Your in the Heart” doesn’t so much pay homage to Chan Romero’s “Hippy Hippy Shake” (later made famous by the Beatles) as steal it.

Again, Green Day retain their performance chops on Father of All, so the issue isn’t that their playing or singing has gotten weaker. They’ve lost none of their enthusiasm or technical skills. What they have lost, though, is virtually any sense of originality, intrigue, or pertinence. It doesn’t appear like they have anything left to say—or any new way to say it—so they rely on sounds and sentiments that became old hat long ago. Sure, many other bands stop forging new territory after going for so long—and kudos to the trio for keeping at it—but rarely has the phrase “you’ve heard this all before” felt so apt. Thus, Father of All may marginally satisfy fans who want more of that central persona, but it’s unlikely that even the most diehard among them will truly celebrate it.