I don’t want to be the person who nitpicks the logistics in a thriller, but Neil Jordan’s latest movie, Greta, has backed me into a corner. The film, which had its world premiere at TIFF 2018, follows a 20-something waitress named Frances (Chloë Grace Moretz) as she does what she thinks is a good deed by returning a lost handbag to a lonely, middle-aged woman named Greta (Isabelle Huppert). The two strike up what seems to be a genuine friendship that has some familial overtones — Greta is estranged from her adult daughter, and Frances has recently lost her mother — but it quickly turns sour, leading to the life and death kidnapping situation depicted in the stills.

It’s not clear how much of the story will be revealed by the film’s trailer. I went into it knowing that, at the very least, Chloë Grace Moretz would be chained to a bed in a creepy-looking room, and I do wonder how I might have reacted if I hadn’t known that from the beginning. There’s a leisurely pace in the first half of the film, as Frances and Greta form their friendship and, even when things take a negative turn, it’s possible to believe at first that Greta still means well.

Unfortunately, Frances eventually discovers that she’s one in a long line of women lured to Greta’s house under false pretenses. When she tries to back away from the relationship, Greta goes berserk and starts stalking and harassing her, sending hundreds of texts in a row, and showing up at the restaurant where Frances works. When that doesn’t succeed in winning Frances back, she starts openly threatening Frances and her roommate Erica (Maika Monroe). The two friends try to protect each other, but it feels like it’s only a matter of time before Greta does something deadly. 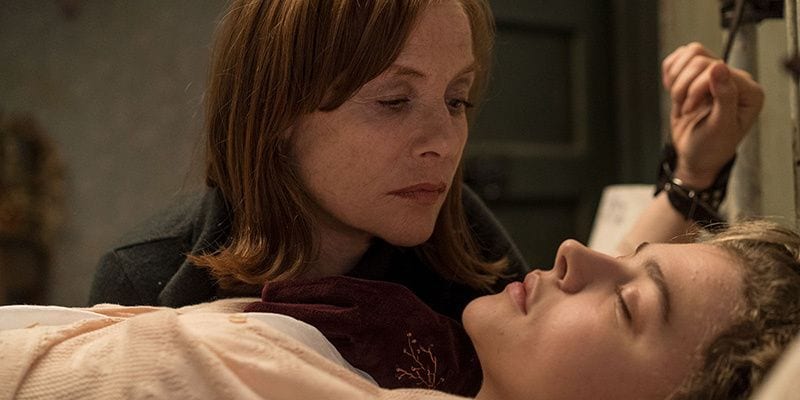 Greta is, at turns, suspenseful, frightening, perplexing, and surprisingly uplifting. The audience I saw it with started clapping and cheering at one point. There’s a narrative twist that I’ve never seen before, and there’s a moment of violence that made my jaw drop. It’s also a genuine pleasure to watch Huppert sink into her role. Greta is a villain’s villain in that, once she gives up any pretense of being a kindly middle-aged lady, she becomes so ghastly — and expressively so — that it’s both terrible and amazing. It’s also the kind of part that female actors don’t usually get to play, so there’s a novelty to seeing it on screen. There’s very little attempt to humanize her or to make us empathize with her. The explanation we get for her behavior is very straightforward: like many serial killers, she feels a strong sense of entitlement — to have somebody ease her loneliness, to receive assurance that she was a good mother, to receive the attention and adoration she thinks she deserves. She will gladly trample over anybody else’s rights to get what she wants; it’s that simple.

The simplicity of the film — serial killers gotta serial kill — means that I have nowhere to put my attention besides the plot details on screen. I can’t analyze the themes or the message or what the movie has to say about mother-daughter relationships because the movie is deliberately not offering those things. So please understand that it’s on Greta’s own terms when I tell you that, no matter how entertaining it is, the plot usually doesn’t make sense.

The biggest vortex of incomprehensible nonsense surrounds the need to get the New York City Police Department out of the way. There are multiple points in the film (and even points before the events of the film) where quickly telling the police what was going on could have led to an arrest. Greta seems to know that and burns some energy in the first half explaining why the police can’t do anything. It’s a sequence in which the police give out wrong information about the stalking laws in New York but, more importantly, it’s meant to convince us that, because the police can’t intervene when Greta’s watching Frances through a window, they also can’t intervene when she makes blatant threats or becomes the most obvious suspect in a major crime.

There’s also some confusion about what happened to Greta’s previous victims, and how on earth her method for luring them to her is even successful.

Despite what I just said, the unlikeliness of the whole situation in Greta isn’t just important because there’s so little else to hook into — it’s also because a thriller gets a lot less thrilling and the scares get a lot less scary when the villain’s evil plot succeeds because she’s incredibly lucky rather than because she came up with a really smart plan.

Even though it may be hard to suspend disbelief, Greta is a wild ride and an example of a modern-day thriller that not only allows its characters to use their cell phones, but dramatizes how a cell phone can be used as a tool to terrorize someone. It was bought by Focus Features during the festival and is expected to be released in 2019.