There’s a genuine buzz in the air around San Francisco’s Masonic Auditorium here on this Wednesday evening in September, as a new band conjures a feeling reminiscent of a not too distant yet somewhat bygone age. Back in the ’90s and into the early aughts, a young rock band could conjure national buzz with a hit video on MTV and find themselves touring the nation with major label backing. Such a phenomenon is quite rare these days since hardly anyone watches MTV anymore, but Greta Van Fleet seems to be re-writing the script.

Major record labels are fighting for survival in the digital age and are rarely investing big money in young rock bands anymore. Enter the young men of Greta Van Fleet, a rocking Michigan quartet with a name that sounds like it came from the film musical Rock of Ages and with a sound that’s drawn inevitable comparisons to a certain influential British rock ‘n’ roll quartet that ruled the ’70s. Comprised of 22-year-old twin brothers Josh Kiszka on vocals and Jake Kiszka on guitar, 19-year-old younger brother Sam Kiszka on bass, and 19-year-old Danny Wagner on drums, Greta Van Fleet has stormed the nation over the past year while still yet even to release their debut LP.

Last year’s eight-song double EP From the Fires has already burned its way into listeners’ hearts with a vibrantly vintage rock ‘n’ roll sound though, and the new LP Anthem of the Peaceful Army is now set to drop on October 19. How such a young band can generate the buzz to bypass playing San Francisco’s venerable Fillmore Auditorium and go right to a three-night Bay Area stand at Oakland’s Fox Theater, San Jose’s City National Civic and now here at an almost full 3,500-capacity Masonic Auditorium remains something of a mystery, but this is part of Greta Van Fleet’s growing mystique.

The record label must be investing heavily in promotion, but that still doesn’t sell tickets by itself. A band has got to have a compelling sound and From the Fires has struck a chord with a classic rock flavor that feels fresh even as it recalls the mighty Zeppelin. Gen-Xers may recall another band that arrived with similar buzz back in 1988, when German rockers Kingdom Come burst onto the scene with a Zeppish sounding hit album and an opening slot on the Monsters of Rock stadium tour with Van Halen, the Scorpions, Metallica, and Dokken. Kingdom Come turned out to be more of a blazing comet though, so what does the future hold for Greta Van Fleet? This is what the audience here at the Masonic wants to find out, as well as how Greta’s sound will translate in the live setting.

The band opens with the hard rocking “Highway Tune”, which does indeed have a Zeppish flavor that brings the crowd alive. The buzz continues to build on “Edge of Darkness” as the quartet stretches the mid-tempo number out for more than 10 minutes thanks to some fierce guitar soloing from Jake Kiszka. The Masonic is not known for great acoustics, and some of Greta’s impressive dynamics that are clear on From the Fires get lost here in the muddiness of the room’s cavernous space. It’s a challenge for all guitar-driven bands that play here, but Greta Van Fleet powers through.

The group mixes things up on “Flower Power”, with Sam switching over to keyboards while Jake moves to acoustic guitar as Josh tones down his delivery on a melodic gem that feels like it could be a lost classic. Jake sticks with the acoustic for “You’re the One”, a romantic flavored tune that just sounds like a hit in waiting with Josh showing off vocal chops that could lead fans to wonder if he was related to Robert Plant in a past life in Middle Earth. Greta switches gears again for a charged cover of Howlin Wolf’s “Evil”, and it’s another winner. Most of the fans in the balcony are sitting down, but the packed crowd on the lower level is raging like a typical rock ‘n’ roll audience.

The short but sweet set steams toward its conclusion with strong new material from Anthem of the Peaceful Army. The band rocks out on the bluesy “Watching Over”, with Josh’s lyrics alluding to deeper themes than one might expect from such a young band as he sings, “I wonder when we’ll realize / This is what we’ve got left / And it’s our demise / With the water rising / And air so thin / Still the children smiling / Can we see no sin?” The set closes in climactic fashion with “When the Curtain Falls”, a powerhouse single from the new album that features a downright mystical video that appears to have been shot at the same interdimensional Southern California desert location where Starfleet’s Captain Kirk fought the Gorn.

Greta Van Fleet exits the stage to massive applause from the crowd, which keeps on roaring until the boys return with the crowd-pleasing “Black Smoke Rising”. The infectious tune not only features some of the band’s sharpest musical hooks, but also some of Josh’s deepest lyrics as he ponders Earth’s history of conflict: “Many people are dividing / And a world apart with just one heart / Is bound to keel and fade away / None of us will be deciding / And the fate of man is in the hands / Of he who stands and heeds the call.”

“The lyrics for the song ‘Black Smoke Rising’ are a reflection on the lessons of history and that man does not always learn from the lessons of history,” Josh told MetalRiot.com last year. “The wars and tyrants of ages past and the innocent victims of blind hatred ultimately have us begging the question, ‘What is the meaning behind all this? The song is a reaction to these themes, and in a more positive light, embodies a unity of humanity, as an example.” 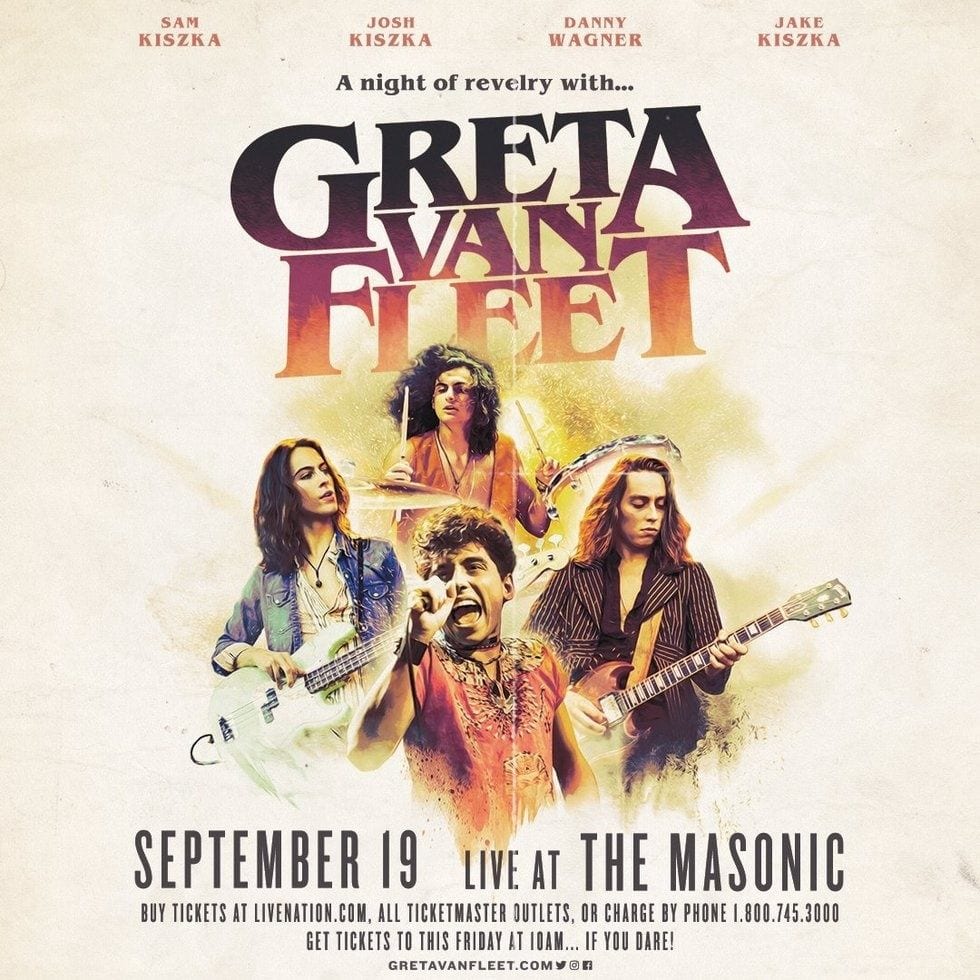 The raucous “Safari Song” follows as a second encore to end the night, with Jake firing up some sizzling slide guitar and Josh belting out some of his most dynamic vocals as the crowd rocks out once more. His signature scream can start to feel a bit overdone with as many times as it pops up throughout the set, a style he’s attributed to developing so he could hear himself over the band back in their Michigan garage days. But this is something that can be honed like a wide receiver learning to run sharper routes, whereas the deep lyrics on tunes like “Watching Over” and “Black Smoke Rising” reveal an artist who seems like an old soul that’s out to harness the power of rock ‘n’ roll to fulfill its counterculture promise to help manifest a better world. With a modern world that’s gone over the edge into insanity since Donald Trump weaseled his way into the White House, Anthem for a Peaceful Army sounds like just what the doctor ordered.