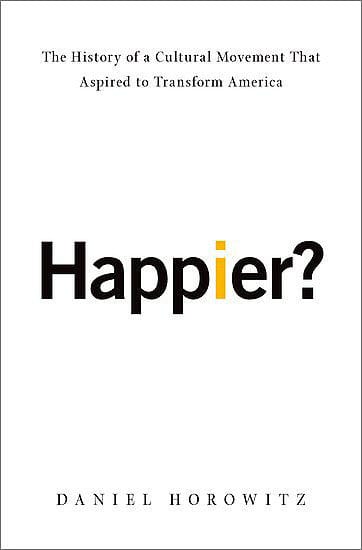 In January, The New York Times reported that the most popular course at Yale, with a record-breaking enrollment of 1,200 undergraduates, concerned the subject of happiness. Taught by Professor Laurie Santos, PSYC 157 introduced students to “a set of scientifically-validated strategies for living the good life.” Santos explained in interviews that she developed the course in part as a response to what she saw as a mental health crisis among undergraduates, over half of whom at Yale report seeking assistance from mental health professionals during their time at the university.

The popularity of Santos’s course, not to mention others like it across the country, surely has something to do with anxiety and depression on America’s college campuses. But it’s also part of a larger cultural conversation whose presence can be felt well beyond the Ivy League. Talk of happiness is everywhere, and not just in the places where you might expect. A mainstay of the self-help section of books sources (brick-and-mortar and online), in the Oprah media empire, and in TED talks, happiness also crops up in high-level discussions in corporate boardrooms, the US military, and among politicians and policy makers both at home and abroad. This pervasive conversation is the product of two intertwined intellectual disciplines — “happiness studies” and “positive psychology” — and the impressive but also disturbing story of their rise is ably told by historian Daniel Horowitz in Happier? The History of a Cultural Movement that Aspired to Transform America.

Study of happiness is not new. Philosophers ancient and modern investigated it. More recently, religious thinkers, particularly in the United States, stressed its importance (consider Norman Vincent Peale, a protestant minister and the author of The Power of Positive Thinking, 1952). What is new and noteworthy about the study of happiness in the post-World War II era is the idea that it can be analyzed scientifically, that psychology, a science of the mind, can produce law-like insights with which to maximize well-being. Rather than being confined to the murkier realm of values, psychology would bring happiness to the realm of fact. To do this, it not only needed to turn happiness into something quantifiable, but to turn psychology from a discipline that focused on diagnosing and removing mental illness to one that showed people how to maximize their health.

This is the transformation that Martin Seligman promised when, in his presidential address to the American Psychological Association in 1998, he urged psychologists to focus on “the flourishing individual and the thriving community.” Psychology in the 20th century had neglected this, according to Seligman, and it was time for a change. Horowitz’s book begins with Seligman’s speech, but it immediately moves backward in time, putting the rise of positive psychology in its historical context. The origins of positive psychology, it turns out, can be found in the misery of the postwar world. Horowitz takes us on a tour of this world and many of its major thinkers, including existentialists like Viktor Frankl, psychologists like Abraham Maslow, and counter-cultural figures like Alan Watts, all of whom offered their readers affirmative approaches to modern feelings of anomie and meaninglessness. Subsequent chapters of Horowitz’s book chart the rise of happiness studies; the merging of happiness studies with medicine, “Eastern” meditation practices and neuroscience; the maturation of positive psychology as a discipline; and the ways in which this discipline’s findings were popularized and commercialized by journalists, entrepreneurs, and intellectuals as well as used by politicians. A coda follows Horowitz and his wife to the Fourth World Congress on Positive Psychology, held at that fortress of happiness and positivity, Disney World.

Happier is thorough and even-handed (in places, maybe a little too even-handed —more on that in a moment). Apart from its use for scholars of recent intellectual history, curious lay readers will appreciate the way Horowitz deliberately explains complicated and disparate material. He helps readers understand the groundbreaking psychological studies that underlay the shift from a focus on mental illness to mental health. These studies include the discovery of the hedonic treadmill (in which people “seek new levels of stimulation merely to maintain old levels of subjective pleasure”), reciprocal altruism (where survival of the fittest is suspended for the benefits of cooperation), the warm glow hypothesis (in which people who feel good themselves were found more likely to help others), the availability of immersive flow states as a precondition for happiness, the health benefits of transcendental meditation, and so on. Horowitz shows his readers how these discoveries assisted later work by major positive psychologists and their popularizers, and he is also a shrewd observer of the ways in which, beyond the confines of academia and the higher journalism, “the organized pursuit of happiness has swept into virtually every corner of American life.”

It is here, in analyzing what he calls “the business of happiness”, that Horowitz comes face to face with a striking fact: the rise of happiness studies and positive psychology neatly dovetails with the rise of neoliberalism as a political and economic orthodoxy in the postwar world. Early chapters allude to the ways in which positive psychologists mostly soft-pedaled or ignored questions of social justice, including deleterious effects of discrimination based on race, sex, and class; Horowitz also sensibly notes that, in directing people towards the pursuit of personal happiness, positive psychologists were also not directing them toward changing anything about their actually existing social relations. (Again and again in the scholarly and popular literature on happiness, one reads that happiness can be found through changes to the self, rather than changes to society.) Horowitz does not come out and say that a loss of faith in both utopian and reformist leftist projects of social transformation caused a rightward shift in the psychological field toward happiness and positivity. However, he does show how happiness studies and positive psychology, particularly when they were spread through new media, reinforced “the hold of neoliberalism”.

For example, in discussing Oprah’s adoption of positive psychology — the early years of her show, it bears remembering, focused more on suffering rather than happiness — Horowitz rightly points out how she effectively sublimated questions of race, sex, and class into a gospel of empowerment and responsibility that “reaffirmed the power of the American dream in troubled economic times.” He’s even more direct in connecting politics, economics, and happiness in discussing the Templeton Foundation, which has bestowed millions of dollars in grants on prominent positive psychologists. Among the cornerstones of the Templeton Foundation, otherwise devoted to unraveling the mysteries of science and religion? “Individual Freedom and Free Markets”.

However, there’s something missing from Horowitz’s judicious book: a willingness to go the extra step and engage in a little old-fashioned ideology critique. This is all the more disappointing because beyond the fact that happiness has clearly moved to the center of psychological and popular discourse, the upshot of Happier is that happiness studies and positive psychology are integral to the ideology of neoliberalism. I don’t just mean ideology in the sense of a distraction or a distortion, but ideology in a more fundamental, Althusserian sense: as an imaginary relation between ourselves and the real conditions in which we live. To search for happiness, at least defined as something like subjective well-being, is to adjust this imaginary relation in such a way that it avoids admitting of its own imaginary status. It puts us in a bubble, deferring not only questions of justice but, more problematically, questions of truth. “Know thyself” — the great motto of critical thought from Plato to Freud — becomes Joseph Campbell’s “follow your bliss” or Oprah’s ubiquitous “live your best life”.

The disturbing thing is that the focus on happiness doesn’t just keep us from a more complete understanding of our lives, but that it does so while actually making us feel better. A society organized along the lines of neoliberal capitalism is unjust. But at least for those of us with enough capital, that injustice can feel pretty great. And if it doesn’t, we can take Professor Santos’s course and try out some of the scientifically validated strategies for living the good life (it’s now online, for free). Horowitz acknowledges this conundrum when he concludes his otherwise damning summary of the “business of happiness” by observing that “it is likely that millions of people derived genuine satisfaction” from positive psychology and its offshoots “in ways that enhanced their subjective well-being.” No doubt he’s right. But why should subjective well-being really be so important in the first place? The emphasis on happiness as subjective well-being — as opposed to something closer to what Aristotle imagined, i.e., activity in accordance with virtue — might be where we go wrong in the first place. Thinking about happiness as primarily subjective takes our consideration of happiness out of the social world and puts it securely in our bodies, forever short-circuiting any reflection on the greater good.

Horowitz ends his history of happiness on an uncertain note with respect to its political consequences. Reflecting on the Fourth World Congress on Positive Psychology, he sees the field at a fork in the road: on one side a more conservative appeal to character or “grit” (the latest positive psychology buzzword to capture the popular imagination), and on the other, a more “liberal” activist approach to changing culture so as to allow more people to flourish. Politically, these seem like two sides of the same coin to me (at least if changing culture doesn’t necessarily imply changing the economic system that supports it). Moreover, there is ample reason to doubt that this coin is still the coin of the realm. The past decade has revealed notable cracks in the facades of both neoliberalism and the centrality of happiness to our emotional lives. Happiness studies and positive psychology may have aspired to transform America. They surely contributed to our knowledge about how to feel better, at least as individuals. But they also provided us an effective way to ignore the troubling consequences of our politics and our economics, an avoidance for which we are now paying the price.