It’s absurd to declare a crowd of 16,874 people an “intimate gathering”, especially in a genre where attending club shows of fewer than 100 people are flaunted by some fans as a sort of scene currency. However, when an act that normally sells out football stadiums and headlines open-air festivals scales things down to the level of hockey and basketball arenas, the difference to the spectator is astonishing. Sure, it’s not as big a moneymaker as performing to a minimum of 40,000 people every time out, but it can be a shrewd move by those who choose to make the sacrifice. In recent years Paul McCartney has played indoor arenas to spellbinding effect, creating a remarkable sense of coziness for many fans that were not alive the last time he played a venue that small. It makes a huge difference too; while it’s fun to hear Beatles material performed at a massive gathering, witnessing “Back in the USSR” and “Paperback Writer” in a place where you don’t need a gigantic video screen to see the man is frankly a euphoric experience.

Metallica have reached a point in their career where they don’t have to play a venue smaller than a football stadium ever again; besides, that’s a luxury earned by being the biggest heavy metal band of all time. The thing is, though, with that level of stardom comes the kind of clout few artists can ever match. Metallica can do whatever they want, whether it’s collaborating with Lou Reed, filming a concert movie in IMAX, or as has happened in late-2018, touring indoor arenas across North America like it was 1992 all over again. And not only that, but playing smaller markets that haven’t hosted the band in well over a decade, or in some cases, ever. Not surprisingly, a small-market hockey barn tour was a masterstroke of a PR move for Metallica: shows sold out in minutes, and a level of excitement was created among longtime fans that hadn’t been felt in years.

From 1986 through 2004, the Canadian prairie city of Saskatoon, Saskatchewan was a staple stop for Metallica. After 2008’s Death Magnetic helped win over a new generation of young fans, and Metallica started to ease up on the rigorous tour schedules for the sake of sanity and family life, the city of 300,000 fell by the wayside, bypassed in favor of bigger Western Canadian centers like Edmonton and Vancouver. Consequently, local excitement for Metallica’s first Saskatoon performance in 14 years was through the roof, an instant sellout seven months prior, and on the night of the show, breaking the venue’s record for the biggest crowd ever assembled there.

Ever since the world tour in support of 1991’s Black Album, Metallica has perfected the arena rock experience, creating as immersive and inclusive an atmosphere as possible by performing “in the round”. For all the variations they’ve brought to the concept over the years, though, they’ve perfected it on the current run. Coinciding with the back-to-basics approach of 2016’s double album Hardwired…To Self Destruct, the live presentation is similarly streamlined. The white-floored stage is a simple square, with zero visual obstructions, the real technological marvel being the lighting rig, which is comprised of an elaborate series of cubic LED screens, which subtly rise and lower throughout the show, mirroring the dynamic ebb and flow of the band’s two and a half-hour set.

As one could tell on this night, this approach is an especially inspired idea, because Metallica’s chemistry as a live act hasn’t been this strong in ages, and the staging of this particular concert places distinct focus on the four members, with neither big video screens nor garish stage effects.

When James Hetfield, Lars Ulrich, Kirk Hammett, and Robert Trujillo strode onstage and launched into the barnstorming “Hardwired” followed by the old-school metal riffery of “Atlas, Rise!” it was a far cry from seeing them as kids in the 1980s, annihilating audiences with “Battery” and “Blackened”. Instead of whipping kids into a frenzy with their manic, early-20s energy, these 50-something dudes were a lot more measured, clearly pacing themselves for the performance ahead. As soon as they kicked into such classics as “Seek and Destroy”, Creeping Death”, and “For Whom the Bell Tolls”, however, glimpses of that old magic were evident: Hetfield hammering out his muscular rhythm riffs, Hammett shredding away, Ulrich propelling the songs with gleeful energy, and Trujillo anchoring it all with his authoritative, finger-picked basslines. And the more classic material they played, the sweatier and louder the adoring, rowdy crowd became. 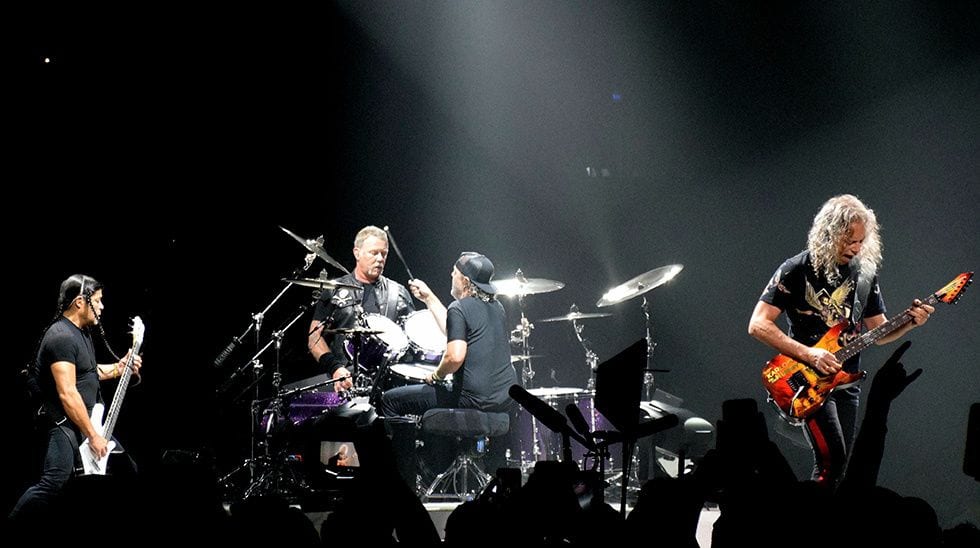 As has been the custom over the last 15 years, Metallica pays close attention to setlist creation, taking note of what songs have been played in the city they’re in and customizing the show to treat fans to a good variety of surprises every night. This evening in particular boasted some choice selections: 1988’s brooding “Harvester of Sorrow” added a wonderful touch of doom to the proceedings, Master of Puppets’ great “Sanitarium (Welcome Home)” was a master class in dynamic metal songwriting, the seminal “Hit the Lights” – Metallica’s very first song – was a fun, thrashy treat, and 1998’s underrated “The Memory Remains” ignited a big sing-along at its conclusion.

Even the mid-set jam session by Hammett and Trujillo, widely scorned as of late for their awkward covers of everything from Prince, to ABBA, to Celtic Frost, was a pleasant surprise, as the nerdy pair kept things simple with a medley of Rush’s “Tom Sawyer” and Metallica’s own “The Judas Kiss”.

For all the variety, the biggest pops of the night were for the expected showstoppers. “One” remains unparalleled in its dynamism, the machine gun cadence of the climactic rhythm riff as exciting now as it was 30 years ago. Hetfield drew a big cheer when he dedicated Black Album ballad “Nothing Else Matters” to Saskatchewan’s Humboldt Broncos hockey club, who lost 16 players and staff in a bus crash this past spring. “Enter Sandman” made its expected appearance to the excitement of the sweaty throng, but by far the biggest reaction was when the immortal “Master of Puppets” kicked into gear, the crowd hanging on every riff, word, and drum beat. As strong as the new material sounded alongside the older selections (“Spit Out the Bone” was a thrashy high point) there’s no escaping the towering legacy of Metallica’s 1980s output, and the joy and exuberance the guys brought to songs they’ve played hundreds of times was a big reason why people exited the building with big smiles on their faces, oblivious to their ringing ears, and in the case of the middle-aged fans, sore feet. Fourteen years was a long time for Saskatoon to go without Metallica, but the band ensured that the wait was well worth it.