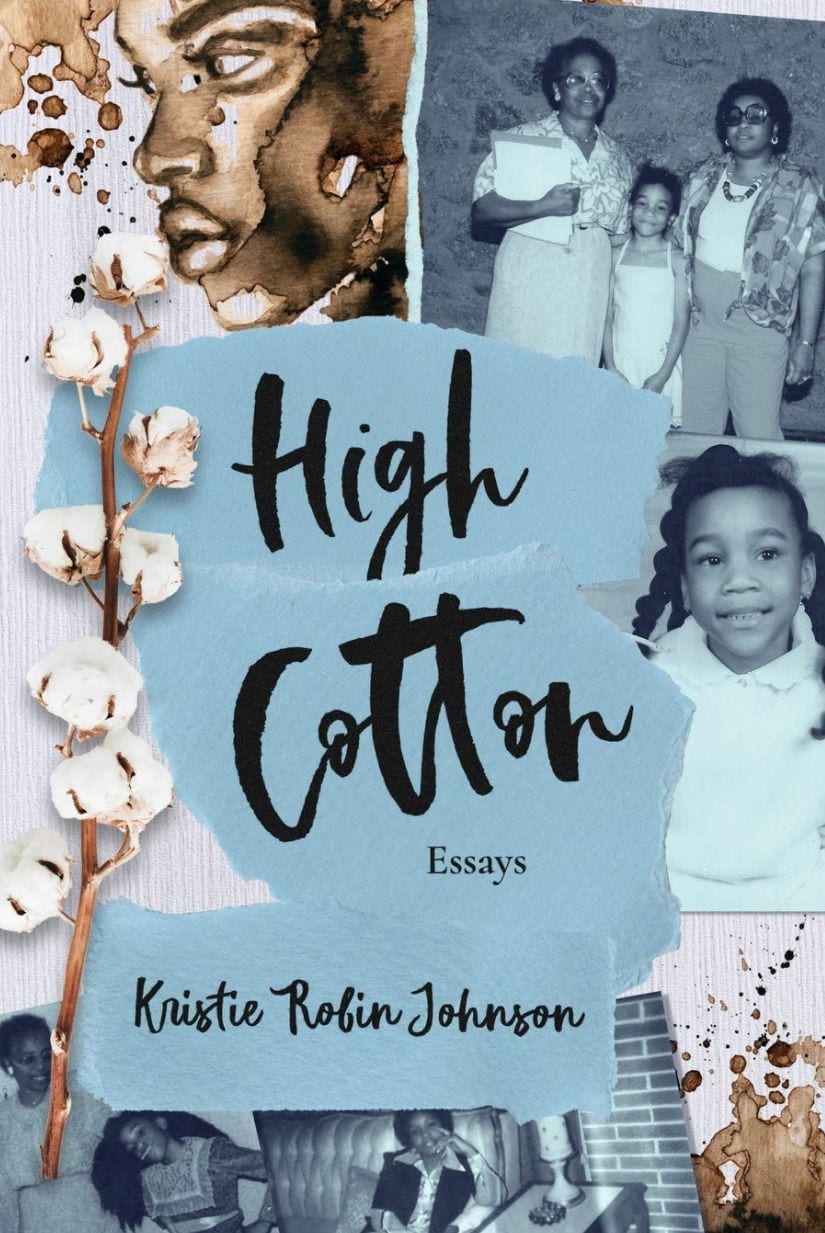 The term ‘high cotton’ originated in the antebellum South and referred to the seasons when the cotton yield was plentiful and the exchange rate was lucrative. The idiom has since been adapted as slang, communicating a feeling of doing well or success. As such, Kristie Robin Johnson‘s High Cotton is an affirming and moving memoir delivering her experiences as an African-American woman in the deep South. Johnson organizes the narrative into essays, each examining her standpoint as part of a larger intersectional conversation. With writing that is at times tender and introspective, other times politicized and fortified, she stealthily taps into the contemporary consciousness.

High Cotton undertakes a myriad of topics including addiction, sexual violence, cultural expectations, and the political and economic conditions reaffirming oppression. Her approach is truly intersectional as she considers how social conditions determine marginalization and privilege. Furthermore, she uses her writing to uplift black culture while demanding readers realize their own prejudices. For example, when she reflects on her impoverished upbringing she assures “the hood experience not only made me streetwise and cautious, it taught me an unfathomable tenderness and generosity” (149).

More so, she situates football as a culturally significant part of the African-American experience. Yet she sees the sport as laying forth a paradox: “the game that seemed to liberate my father from a racist reality … but seemed to trap my son in a tradition and stereotype that should have passed away before he was born” (105). Johnson dismantles linear thinking with shrewdness and empathy.

The visibility of African-Americans is a central theme throughout
High Cotton. The essay “Skinned” celebrates Whitney Houston, Queen Latifah, and Mary J. Blige as reflections of Johnson’s identity and appearance. These artists modeled achievement while rejecting the dominance of whiteness in popular culture for the author. In “Search for Heroes”, her son realizes his teachers are all white, then expresses his discontent with a lack of intellectual role models. Johnson reads the Narrative of the Life of Frederick Douglass as a response. Here High Cotton advocates for expanding the representation and visibility of African-Americans in every facet of culture.

Taking action is essential to Johnson’s ethos and permeates many of her essays. When on vacation in Charleston, South Carolina, she visits Emanuel African Methodist Episcopal Church, where a week earlier, a white supremacist murdered nine worshipers. With energy and intelligence, she castigates “the obligatory, robotic actions … because we are content to take no action to prevent it from happening” (101). After all the mass shootings that occurred since the siege on Emanuel African Episcopal Church, society is still rallying for a change more concrete than hopes and prayers.

The harm caused by inaction is revisited in “American Mourning” as Johnson nervously awaits word from her son’s school undergoing a lockdown. She realizes “the words ‘lock-down’ and ‘massacre’ and ‘active shooter’ have become a part of the zeitgeist. This is us now” (97). Indeed.

For Johnson, the action is not found in a hyper-militarized police force. As the mother of two sons, she is painfully aware of the danger her children face. To complicate matters, her oldest son is autistic and prone to expressing mental health crises through physical aggression. Knowing the fate of Michael Brown and Tamir Rice, Johnson’s fear is palpable when she considers calling the police on her own son. She finds parallels with the family of Quintonio LeGrier and uses their experiences as a cautionary tale.

After months of struggling with his mental health, Quintonio threatened his father with a baseball bat. His parents phoned 911 and asked their elderly neighbor, Bettie Jones, to watch for the police. Upon arrival, the police saw a young black male in crisis and profiled him as a threat. They opened fire, killing both Quintonio and Jones. With sterling honesty, Johnson grieves for the day her son goes into crisis and the police “see my son’s dark skin, deem him a threat, fear for their own lives, and shoot him dead in his own home” (61). Accordingly, Johnson emphasizes how constructed ideas about disability, intertwined with race and gender, criminalizes individuals. Without explicitly referencing the national cries to defund the police, Johnson promotes de-escalation through emotional and social support rather than coercion.

On one hand, Johnson’s strongest writing is found in the portrayal of her maternal lineage. Identifying five generations of American-American women, beginning with Zula, a slave woman and her oldest ancestor, she takes pride in this legacy. Even her imperfect mother, who struggled for decades with addiction, contributed to Johnson’s vision of herself as a “fighter and a survivor” (33).

On the other hand, Johnson’s understanding of gender is the memoir’s weakest point. Despite astutely deconstructing gender’s overlap with race, class, and ability, she often returns to archaic gender roles. For example, she frequently recalls being raised more like a boy than a girl because self-sufficiency, education, and careers were emphasized. Perhaps she is trying to avoid anachronisms when she leaves these stereotypes unscrutinized.

More so, when reading Audre Lorde, she proclaims, “I probably could only be called a pseudo-feminist at best (107).” Yet her text in inundated with feminist thinking including dismantling patriarchal control and interrogating systems of power. This signifies the contemporary feminist movement is still not totally inclusive, especially if individuals such as Johnson reject self-inclusion.

Whereas none of the ideas expressed in High Cotton are all that radical, her writing is a timely redressing of contemporary racial justice discourses. As Johnson’s voice shifts between vulnerability and conviction, her prose is culturally astute and progressive. High Cotton demonstrates the power of the individual’s role in propelling social progress while providing a glimpse of Johnson’s lived experience.