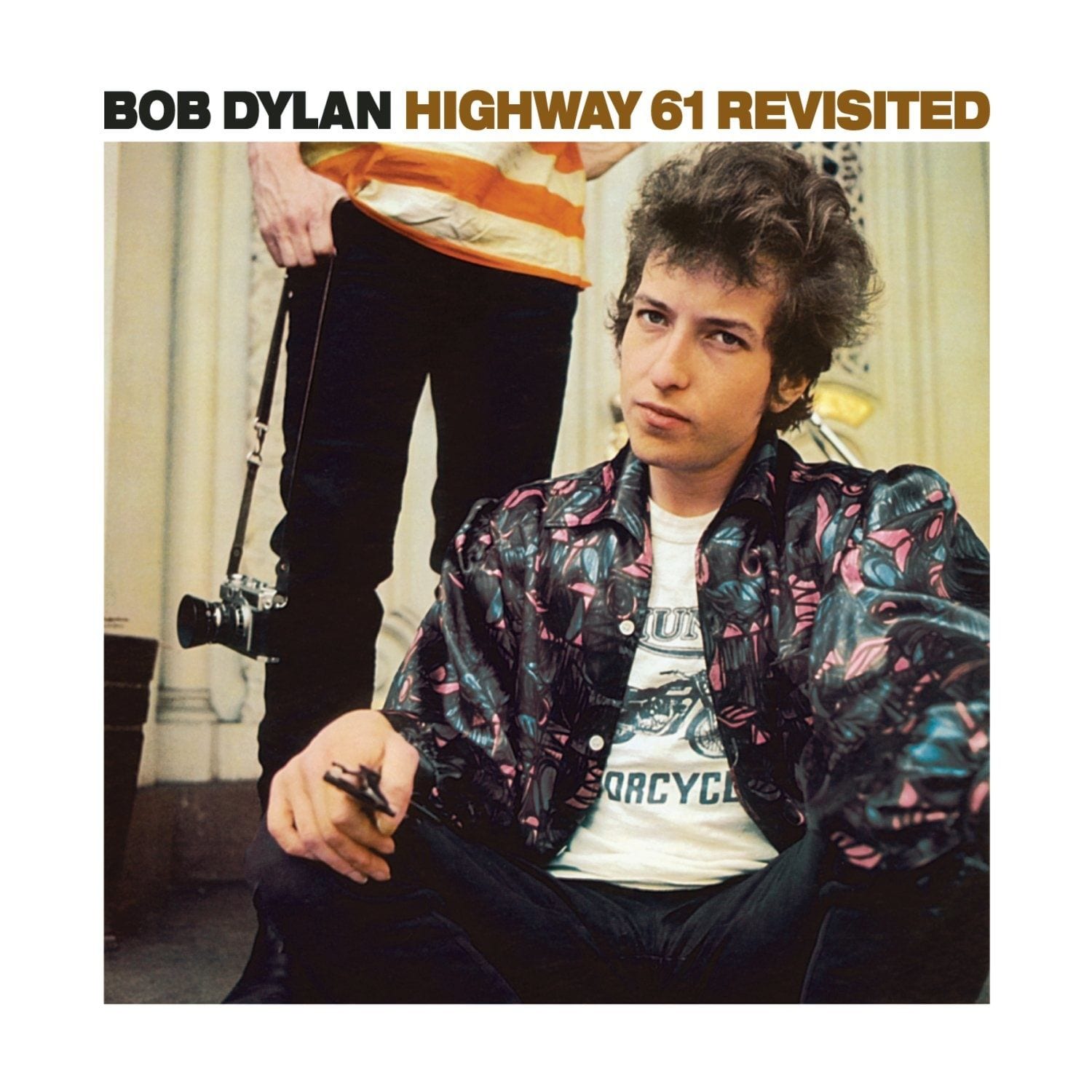 Sometimes the power and promise packed into a pop single can be heard in its opening notes. However, Bob Dylan‘s “Like a Rolling Stone” is not typical pop. It’s six-minute plus duration gives it an unlikely length for a single. Rather, this is rock ‘n’ roll: twice the duration of a standard single and a million times more confrontational.

Think of the opening chord to the Beatles‘ “A Hard Day’s Night”, also released in 1965 (in America, anyway). It, too, starts with a blast, and Dylan might have been motivated by the direction being shown by the Beatles. Both were moving towards a more personal, introspective direction. Specifically, Dylan was moving from topical folk songs and ballads to a more impressionistic recording style—soon to be known as the Thin Wild Mercury Sound)—heavily influenced by Beat poetry, abstract impressions, and the proximity (or likelihood) of hallucinogens. With “Like a Rolling Stone” and its fable-like opening lyrics (“Once upon a time”), the question isn’t where “Miss Lonely” is going to end up so much as what is our reaction to our current condition. “How does it feel / To be without a home? / With no direction home? / Like a complete unknown? / Just like a rolling stone.”

It’s a controlled rage, complimented by Al Kooper’s swirling organ, Michael Bloomfield’s guitar, and Bobby Gregg’s drums’ pounding force. Most of these same players accompanied Dylan in his legendary performance of this song at the 1965 Newport Folk Festival five days after its July release. Compare the relative tame sound of that performance with the way it sounded approximately 14 months later, at the Royal Albert Hall (The Bootleg Series, Vol. 4) and backed by the Band, with Garth Hudson’s swirling organ and the drawling rage of Dylan’s delivery.

He might have been a Judas to a crowd of sensitive folkies who felt he’d betrayed their cause with his electric guitar. He might have responded, “I don’t believe you, you’re a liar!” from the stage before imploring his band to play loud (listen closely and you might hear the “f” word as a qualifier to that loudness). Yet, something was definitely happening here, Mr. Jones. Everything Dylan was to be in the opening track of the middle album of his masterful mid-1960s trilogy (in-between Bringing It All Back Home and Blonde on Blonde) could be heard in the tight control of “Like a Rolling Stone. But there’s still much more to consider about Highway 61 Revisited.

Great albums are dependent on many different conditions, not the least of which is the socio-political climate surrounding their release. Highway 61 Revisited doesn’t speak too loudly about the climate of the day. But, dig deep into “Desolation Row”, the majestic final track that closes the album, and the imagery of a world on fire is explicit. It isn’t just that the song is nearly twice the length of “Like a Rolling Stone”, where Dylan brought his skills to contain a narrative the ability to wash over running times. In his hands, a dozen minutes went by in a moment, and our job was to dig beneath and between and under the lines. What did he mean? He opens with gruesome images (“They’re Selling Postcards of the Hanging“) and closes with a strange sort of humor that would be his mainstay for the next five-plus decades:

“Yes I received your letter yesterday / About the time the doorknob broke / When you asked me how I was doing / Well was that some kind of joke / Right now I can’t read too good / Don’t send me no more letters, no / Not unless you send them from desolation row.”

In-between the postcards of the hanging and the plea for correspondence only from Desolation Row, the cast of characters who appear are in keeping with the name-dropping approach in his latest album, 2020’s stark and at times beautiful Rough and Rowdy Ways. Everybody from Cinderella, Ophelia, and Einstein disguised as Robin Hood, to Ezra Pound and T.S. Eliot, Casanova, and The Phantom of the Opera wander through alleyways and backrooms of Desolation Row. It’s all to the sonic structure of a classical/Spanish guitar atmosphere, nothing electric, nothing too overwhelming. It is by far a coincidence that the album’s opening number begins with “Once upon a time”, and the final song ends in solitude. That said, it’s an isolation that’s not unwanted. It’s an earned independence, something to covet after years of trying to fit in.

“They watch the horrors taking place in the building across the street, where the Phantom of the Opera is about to serve a meal of human flesh, but it’s nothing they haven’t seen before”. (Marcus).

It’s a new world Dylan promises at the start of Highway 61 Revisited, a singer boldly asking us how it feels to be stranded in a world, not of our making, and we are still left in the final verse of the final track. That said, Dylan doesn’t make us feel alone. We’re with him, deep in the middle of the 1960s. More assassinations will follow, as will more deaths in Vietnam and civil unrest in the streets. Dylan won’t be leading the way as a spokesman for his generation because that was never a role he was willing to accept. Instead, he used songs like this album’s title track to continue his habit of mixing Old Testament imagery with a Beat Poet’s sensibility:

Everything we know about Highway 61 can be traced back to the roots of its 1,400 miles, from Minnesota down to Louisiana. It cuts through the middle of the United States. Where it ran through Clarksdale, Mississippi is the focal point of blues legend Robert Johnson’s legendary deal with the devil. Dylan knew the touchstones of American culture and mixed them with Biblical imagery to create something uniquely his own. By the end of “Highway 61 Revisited”, all the characters who’d assembled for out consideration (Georgia Sam, Mack the Finger, Louie the King, the fifth daughter on the 12th night, and more) all seemed to understand that everything had to take place somewhere on that mythic power, the focal point of American archetypes, whose only musical equal is Route 66.

Blues have always been an important element in Dylan’s music, and they’re on display with “It Takes a Lot to Laugh, It Takes a Train to Cry”, “From a Buick 6”, and “Just Like Tom Thumb’s Blues”. In contrast, “Queen Jane Approximately” is as close to a love song as we’ll hear anywhere in Highway 61 Revisited, and even there it’s difficult to contain. When everything and everybody has abandoned you, he tells her, “come see me”. I’ll be there. In “Tombstone Blues”, a rollicking number with recognizable characters weaving in and out, one verse, in particular, might bring to mind a certain current US President promoting an unproven cure to a virus that could kill us all if we’re not careful:

“Now the medicine man comes, and he shuffles inside / He walks with a swagger, and he says to the bride / ‘Stop all this weeping, swallow your pride / You will not die. It’s not poison.'”

That leaves us with “Ballad of a Thin Man”, in which Mr. Jones sees things he can’t understand. What is happening? He doesn’t know, and he never will. “You’ve been with the professors / They all like your looks / With great lawyers you have / Discussed lepers and crooks / You’ve been through all of F. Scott Fitzgerald’s books / You’re very well read / It’s well known.” It’s one of the songs from this album that would be even more menacing when played with the Band in 1966. “Oh my God / Am I here all alone?” he sings; it’s a question that needs to be asked and one that we might not want to be answered.

The legacy of Highway 61 Revisited is untarnished, perhaps even stronger after 55 years floating through the ether of Dylan’s history and ours. It’s an album of big ideas, swirling organs, Dylan playing a police car on the title track, and a sense of doom that is more welcoming than apocalyptic. The idea that the sounds and sentiments in this album—second in a trilogy of wild (for Dylan) rock sounds—would mark the death knell (in some eyes) of his role as noble and pure folk star spokesman is quaint in retrospect. He had said goodbye to that mission in 1964, after the first two years of his recording career. His fans were just a little too late (and a little too self-righteous) to understand that something was indeed happening. It was wild, untamed, and dangerous.

Jimi Hendrix knew two years later at Monterey, and Richie Havens kept the torch burning in the 1960’s as he did in this clip, decades later. Everything Dylan’s doing now contains the DNA of what he has always done, especially in Highway 61 Revisited. It’s just taken us a while to catch up with these sounds, these lyrics, and these characters weaving in and out of our lives. We shouldn’t be longing for a return of 1965 Bob Dylan since he’s never really gone away.