Sales of Charles Forsman’s 2013 End of the Fxxxing World spiked in 2018 with the Netflix release of the eight-episode British adaptation. Originally serialized in French, Max de Radiguès’s Moose (Conundrum Press) premiered in the US in 2014, followed last year by Bastard (Fantagraphics). Where Forsman draws two teen runaways, Radiguès focuses first on a bullied teen and then a mother and young son running from the law. Their collaboration, Hobo Mom, takes a few of those elements and scrambles them into the tale of an absent mother returning to her estranged husband and a daughter who doesn’t know her in the hopes of forming a new family. In terms of both subject matter and style, it’s difficult to imagine two comics artists better suited to work together.

While I’m curious how the authors evolved their story content, the idiosyncratic back and forth of conceiving characters and developing situation and plot, I correctly assumed that the finished pages would effectively erase that dimension of their collaboration. As with any comic, if the two worked from a script, no hint of it remains. But I was surprised at how seamlessly the pages merge and so disguise the artistic process. While collaboration is standard in comics, scripter/artist combinations are more typical, and when two artists collaborate, one is often the penciler and so the primary visual storyteller laying out pages and panel content for an inker to finish. An exception is the 1988 Havok and Wolverine: Meltdown mini-series, where painters Jon J. Muth and Kent Williams divided not only pages but areas of panels, inserting their distinctively drawn primary characters into the other artist’s visual environment.

Opening Hobo Mom, I expected a similar distinction, with the marks of each artist clearly defined at the page and pen levels. The graphic novel instead presents artwork so unified it could have been created by a single author. The success of the merged style is due in part to the artists’ already similar tendencies. Both work in black and white, with simple, clean lines and virtually no cross-hatching. Their settings are minimal and their figures largely naturalistically proportioned, and while facial features obey cartoonish conventions of exaggeration, the degree is relatively slight. But it’s those distortions that identify each artist: the wide, round jawline of Forsman’s father, the small, triangle nose of Radiguès’s mother. Appropriately, the features of the daughter are more difficult to differentiate, as if the two artists, like their stand-in parents, have merged at the DNA-level of the line.

Layouts are equally merged, with a range of constantly varying rectangles, sometimes gridded in 3×2 or 4×2, other times in uniform rows of shifting panel counts, often with sizing accents on images enlarged by merging panels within an implied grid. Because the frames and internal figures share the same line quality, with the sparse whiteness of a background identical to the white of the margins and gutters, the shifting layouts not only shape the story content but take on a visual significance of their own. The authors occasionally add blocks of black, usually in night scenes or to distinguish objects, plus the slight color effect of hazy pink Benday dots to define shadows. But rather than adding richness to the images, the minimal techniques emphasize the starkness of the artwork. 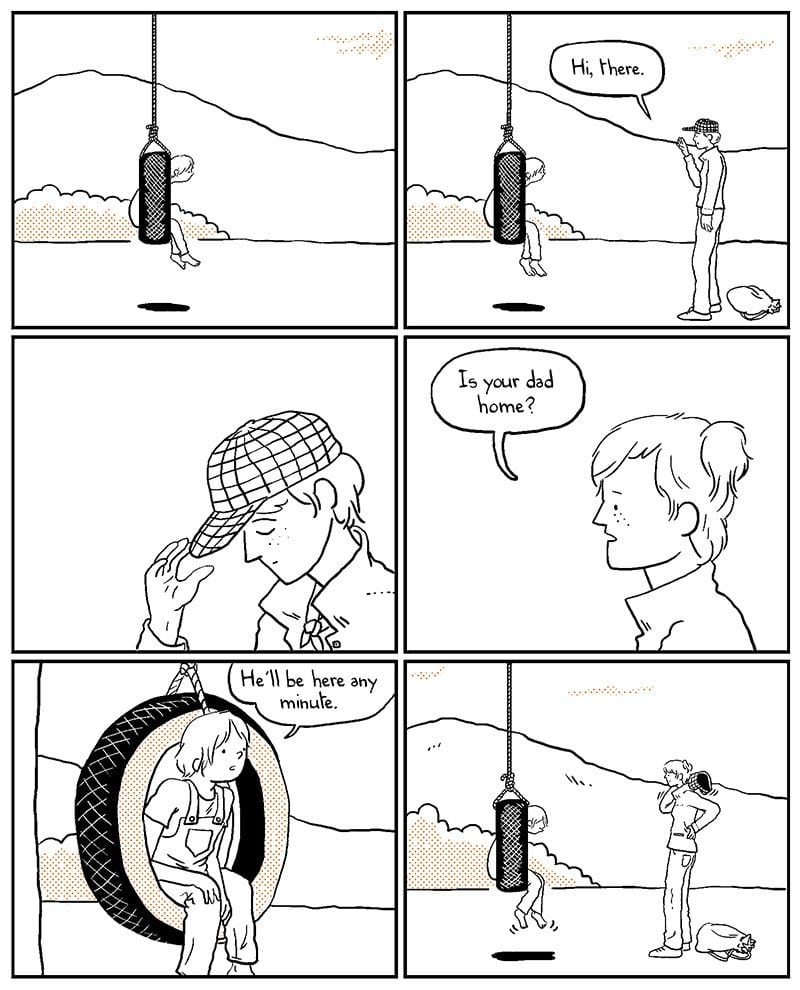 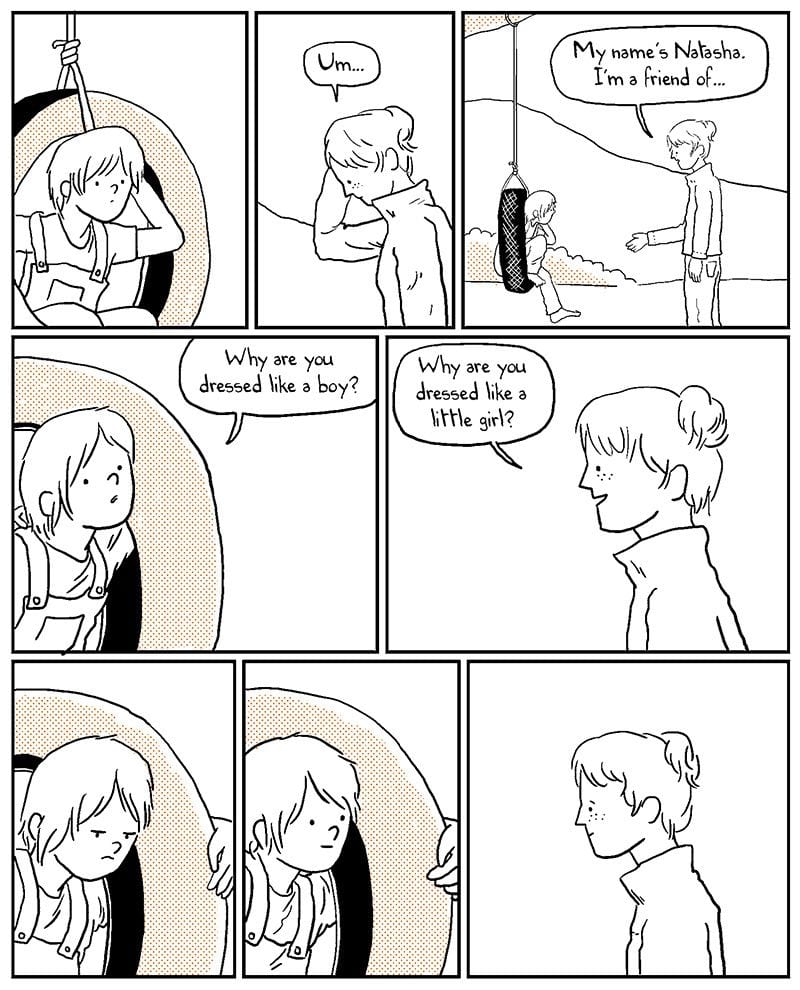 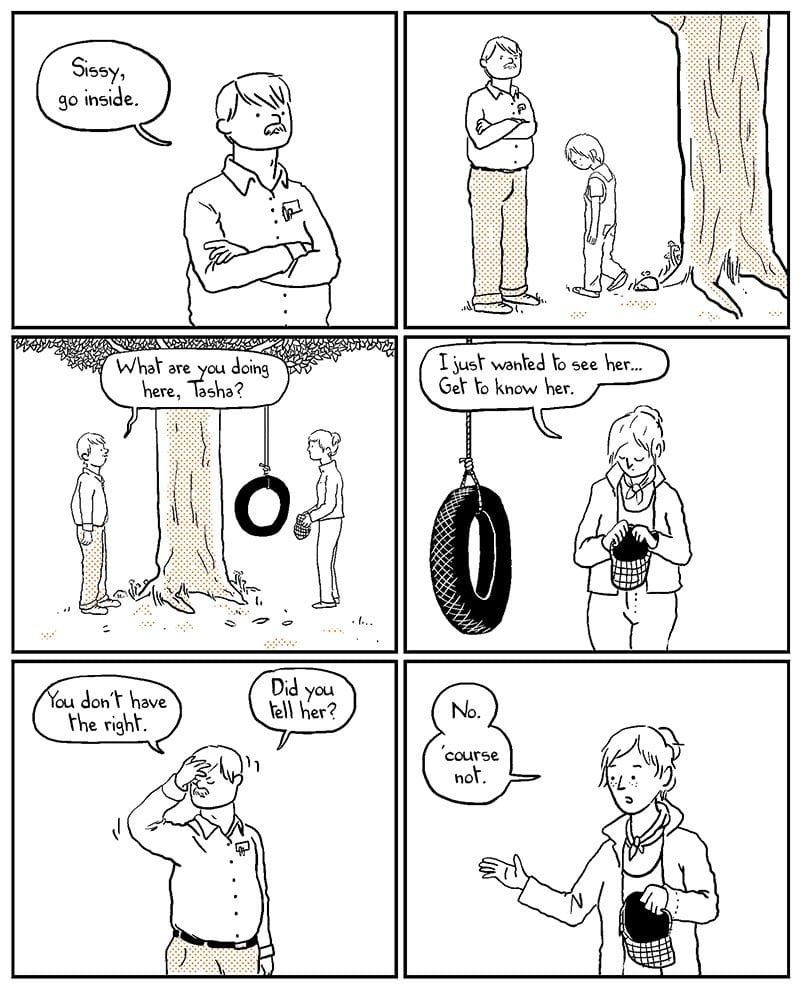 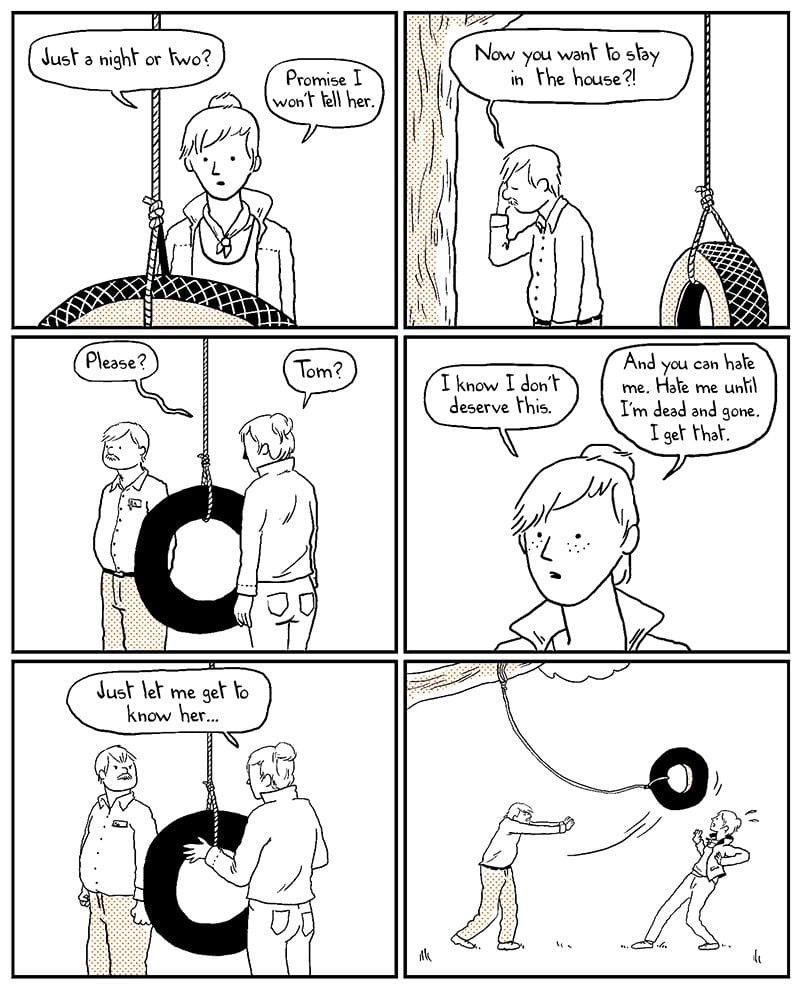 The artists also treat pages as the primary units of composition, ending scenes on final page panels and giving the overall book a visual rhythm synchronized to page turns and the gutter of the book spine. When, for example, the daughter spends two pages feeding her pet rabbit, the scene ends on an enlarged panel revealing that she has climbed inside the enclosure, the angled grid of the fencing evoking the gridded frames of the layout in a way that indirectly suggests why the mother left in the first place. The facing page expands that visual suggestion with a full-page image of a train in an open landscape. A later scene change employs a similar leap, with a 3×2 page of the parents arguing over whether the mother can stay followed by a full-page of the family seated at dinner. After two two-page spreads of night-darkened interior panels culminating in a one-panel sex scene, the page turn marks a scene leap to the next day, with the mother and daughter outside in a white-dominated landscape.

While there are no formal chapters, a visual motif of a full-page panel with a single inset further punctuates the novel, producing an additional rhythm that culminates in a mother-daughter pairing near the climax. While the novel is largely dialogue-driven with no narrating text, later page sequences switch to a purely visual approach that expands the emotional tension through images of silently content mother-daughter interactions in natural landscapes and the brooding father alone in his truck with visions of his wife. The most ambitious page in the novel pairs a close-up of his face with a contextless nude of the mother. Because the face consists of two black circles for eyes and a continuous squiggle of a line to form nose and mustache, the close-up pushes style into nearly pure abstraction—intensified by the naturalistic shape of the more distant nude and its hair-obscured face. For a moment I forgot I was reading a novel and not poring over a concept-rich graphic design.

While the novel is successful both in its minimalistic visual approach and its realistic treatment of the emotional dynamics of an estranged but well-intentioned family, I still question the premise of its high-concept title. Since the word “hobo” evokes Depression-era homeless men hopping rides on agricultural trains, I assumed this contemporary story would use it only metaphorically, the phrase “hobo mom” evoking the title character’s inability to remain in the rabbit cage of traditional motherhood. But, in fact, no, the mother’s opening scene is literally set on a train, in one of those inexplicably empty cars with a sliding side door ubiquitous in film lore. She also faces a would-be rapist who tears open her shirt to expose her cartoon breasts before she manages to shove him out into a dust heap beside the rails. The burly rapist is apparently a “hobo” too, imported from the same bin of clichés, making any metaphorical or thematic reading of the word and its reflection on the mother’s character difficult.

Here I suspect Radiguès, who lives in Brussels, may be the primary hand at work, since the Depression-era tropes are reminiscent of westerns written by European authors who preserve their own pseudo-version of US historical fiction in an even more distorted form. But who knows? Perhaps Forsman, who lives in Massachusetts, has an interest in hobos.

Happily, this one too-literal scene only briefly mars an otherwise warmly intelligent drama as the returned mother tries to make amends and reintegrate into a lifestyle that continues to grate against her wandering impulses. Since her husband is a locksmith who drives a truck adorned with the wordless logo of an antique key, and the daughter plays on a swing made from a tire tied to a tree branch, readers can probably sense the plot trajectory of those metaphors, but the pleasure is in the author’s dual execution.