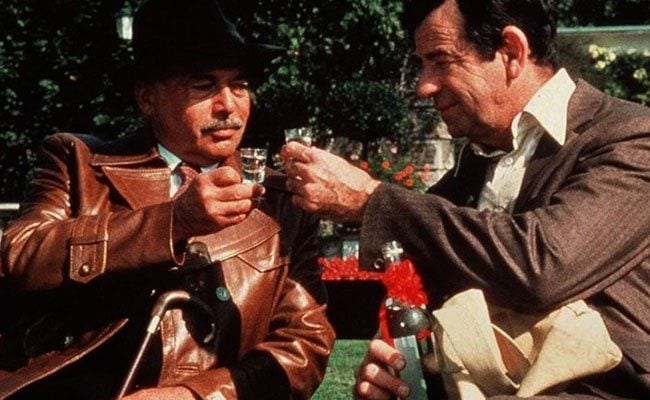 “Hopscotch is a shaggy-dog thriller that never really thrills us very much, but leaves a nice feeling when it’s over,” the late Roger Ebert once wrote. And it’s true. If your notions of Cold War espionage only come from Daniel Craig as 007, Hopscotch may strike you as incredibly tame. It’s billed as an adventure-comedy, but movie-lovers who prefer Extreme Everything will wish it had more of each. If you could envision James Bond and his foils on Valium, you’d have a better idea of how laid-back this film is, even during the action scenes.

It’s no yawner, though.

Ultimately, as Ebert said, you’re glad to have seen this 1980 variation on the caper comedy, and you do feel sated when the end credits roll, thanks to clever writing, some excellent acting, and a third-act payoff. Ronald Neame (The Odessa File, The Poseidon Adventure) was a cinematographer on 47 films before he turned to directing — including working for David Lean on patriotic war movies — and that prepared him to direct a film that showcases brains, not brawn.

A slow first act, certainly, but the low-key shenanigans in Hopscotch aren’t necessarily a weakness. According to an Ian Fleming biographer, in Bucharest, the postwar spy capital of Central Europe, agents from opposite sides would observe each other “from the comfort of the Plaza-Athenée Hotel”. That sort of cautious-but-civilized surveillance and cordial interaction is recreated here, though the setting is mostly Munich and Salzburg, and the action takes place an unspecified number of years before the fall of the Berlin Wall.

Kendig: May I have it, please?

Kendig: I got it all on film, Yaskov. You don’t want to deal with the West Germans. They don’t like Russian intelligence, you know that. Just give it to me and we’ll forget all about it.

Yaskov: I could make a run for it, you know.

Kendig: Come on, Yaskov. You running, me chasing? We’d look like Laurel and Hardy.

Comic actor Walter Matthau (The Odd Couple, The Front Page, Plaza Suite) earned a Golden Globe nomination for his performance as Miles Kendig, a casual-but-cagey (think Columbo without the trenchcoat and cigar) CIA veteran who foils a microfilm exchange but decides not to take his friendly nemesis, Yaskov (Herbert Lom), into custody. That sets the plot in motion and gives his perennially disapproving supervisor, Myerson (Ned Beatty), an excuse to assign him to a desk job for the rest of his service time, effectively putting him out to pasture.

Kendig’s response? He secretly shreds his own file and begins writing a tell-all memoir that would expose his boss as a bungling idiot with questionable morals. In so doing, of course, he also exposes plenty of secrets and information that could embarrass European and Russian espionage agencies as well. Soon they’re all after him and, funnily enough, he’s leaving them plenty of clues to follow.

Astute viewers will realize that Kendig isn’t just fighting the Cold War; he’s also struggling against a subtle class war, where his informal manner and lack of “breeding” in a Yale-grad, country-club CIA culture had put him at odds with superiors and other agents. In a film that feels as if it just barely caught the tailwind of the rebellious ‘60s and early ‘70s, Kendig is an anti-hero in a fairly elaborate, anti-establishment, middle-finger salute. As a result, we like him, and we like the film, and we hope it ends better for Kendig than it did for anti-establishment movie types like Cool Hand Luke or Randall P. McMurphy.

In a way, Hopscotch is a slightly more thinly plotted Charade (another of Matthau’s films) without the same level of violence. It’s Peter Sellers’ Pink Panther without the slapstick and The Sting with fewer con artists.

Questions abound, like: Why would Kendig insist on staying just one short jump ahead of people who are trying to kill him, instead of putting more distance between them? Does he have a death wish? Is it the only way he can demonstrate his superiority to people who have shown him disrespect? Does he really want that memoir to be published, or is it just a device for him to play trickster, the equivalent of Foghorn Leghorn grabbing a chained-up dog by the tail and paddling him with a board just to get him barking? Does he think of this as his last hurrah? And what about Isobel Von Schoenenberg (Glenda Jackson), his good friend with benefits? Do they have a future together? Is she an accomplice or, for all intents and purposes, a loved one assisting him with what may turn out to be his suicide?

Those dramatic questions act as a decent substitute for the typical thriller tropes, and Matthau’s performance and interaction with Beatty and Jackson provide the gentle and witty comedy that reinforce the film’s low-key sensibilities. Then there’s the soundtrack which, save for a single contemporary song, is all opera and all Mozart. Classical music washes over the action, undercutting everything — even shoot-outs — in the same manner as Kendig’s unflappable demeanor and deadpan remarks that are scattered throughout the film.

Attractive woman: You remind me of my father.

Kendig: That’s always been my problem.

Often the jokes work on several levels. The above line was spoken by a seaplane pilot who gives Kendig a ride, and that pilot was played by William Saroyan’s daughter who was also, at the time, Matthau’s stepdaughter, Lucy. Funny, right? But Kendig isn’t the only one who tosses off clever, deadpan lines. When he greets a former colleague well into the “game”, Kendig says, “Good grief, Joe, you look terrible” and gets this response: “Well, you’ve been keeping me up past my regular bedtime.”

As lines like these accrue, you develop a hunger for bonus features that might expose additional cleverness that may have gone unnoticed in an initial viewing. But all of the extras included on this Criterion release don’t yield much in the way of secrets or fun facts. Aside from two trailers and a print essay by film critic Glenn Kenny, there are only two bonus features.

In a 22-minute making-of featurette ported over from a 2002 Criterion release, writer Brian Garfield and director Neame talk about adapting a serious novel into a comic film, with the most interesting factoid being the revelation that they deliberately tried to model Kendig after Oscar Madison, the character Matthau played in Neil Simon’s The Odd Couple. The second main feature is a 1980 interview with Matthau on The Dick Cavett Show, and while there isn’t any Hopscotch-specific conversation, there are some very funny moments. The interview itself is so low-key that Matthau draws laughter when he remarks, “You have absolutely no aggression as an interviewer.” But it’s Cavett who gets the laughs when Matthau starts talking about his career and childhood years and exaggerates, “I didn’t know what a pimp was until I was 38. I didn’t know what a homosexual was until I was 41,” to which Cavett responds, “At that rate, there are probably five or six things you don’t know yet.”

That kind of dry wit also permeates Hopscotch, which is the title Kendig settles on for his memoir. And, of course, hopscotch is a children’s game played on the sidewalks or streets with a chalk grid of squares and rectangles drawn so that children must hop from square to square, never landing on the one that has the “marker” or stone that was tossed onto the court. In this case, the marker is the memoir, and the players hop all over Europe. Just as children who played this once-popular game would sing rhymes and ditties as they took a turn, in Hopscotch we get that non-stop classical music. It’s all very clever, and if it had a stronger first act, the film would be as classic as the music.

Hopscotch earned $13 million at the box office, and for comparison’s sake Star Wars Episode V: The Empire Strikes Back hauled in $534.2 million the same year. Though the stakes in Hopscotch are high, you never quite get the feeling that they’re as high as Kendig and Neame seem to think they are. Still, neither that gap between what’s intended and what viewers experience nor a slow first act are enough to sabotage an otherwise intriguing espionage film.