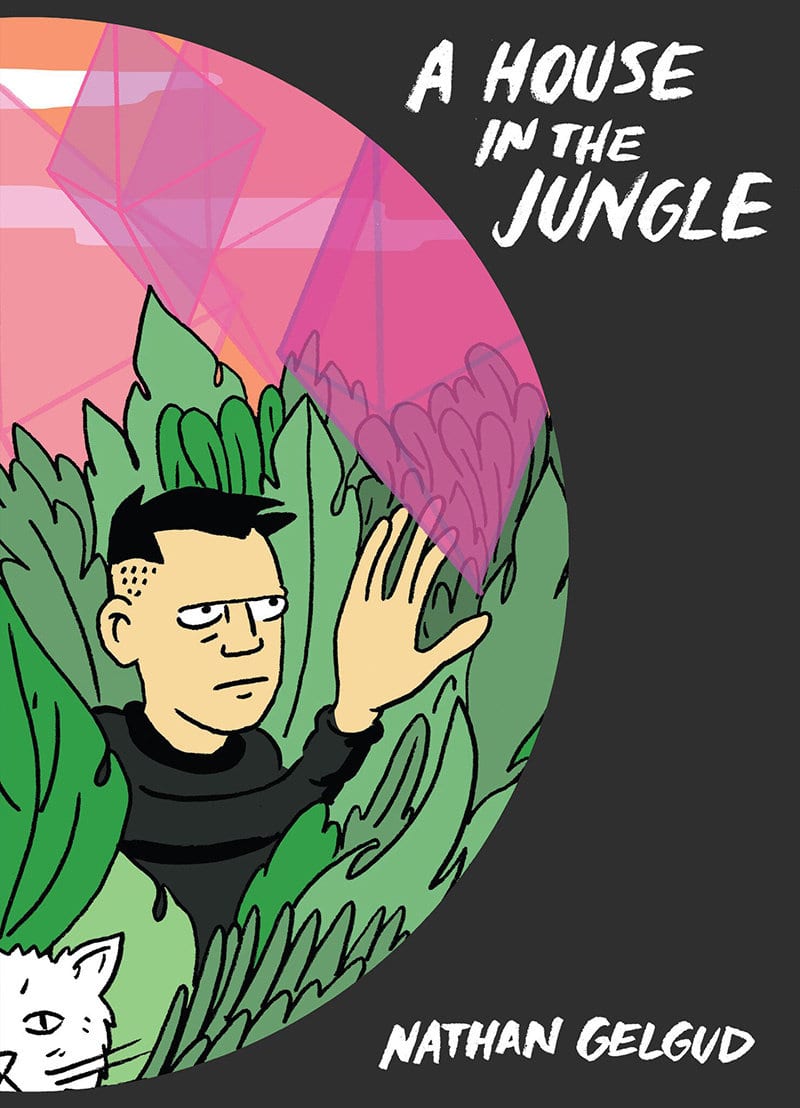 A House in the Jungle
Nathan Gelgud
Koyama Press

A recluse grows addictively hallucinatory pineapples in a jungle near a small but expanding town where he sells them through an organic supermarket in order to pay a guru to transport him to the world of his visions. While that plot may sound plenty odd, it only touches the surface oddity of Nathan Gelgud‘s graphic novel, A House in the Jungle. There are also inexplicable bags of garbage and then dead dogs that appear on the reclusive Daniel’s property—which technically isn’t his property, a fact the ambitious would-be mayor exploits in his attempts to please an almost mythic and soon-to-visit governor. What that has to do with the privatized dump, the missing townsfolk, and the crushed insects Daniels uses to grow his pineapples are more surface mysteries worth reading for.

But Gelgud’s most intriguing oddities occur at a deeper meta-level. A House in the Jungle isn’t just a story—it’s a comics story exploring the comics form that contains it.

When Daniel’s guru asks him, “Did you stick to your speech limit? Sometimes it doesn’t work if you don’t stick to your speech limit,” the character means that their attempt to induce a revelatory vision might fail if Daniel has broken his not-quite-monk-like vow of mostly silence (which is why he carries a card when he goes into town: “SORRY. I’m at capacity for today”). But Gelgud also means the limited number of words on the actual pages of the graphic novel. There’s no narrated text, just talk balloon dialogue and a few sound effects (though he does have fun cheating by combining standards like “plop” and “thwack” with non-sound verbs like “scrub” and “place”). Gelgud works well with his speech limit (the early banter about the supposed chopped-up adult bodies in the boxes of what’s actually pineapples is both darkly funny and darkly foreshadowing), but some pages and multi-page sequences are wordless. 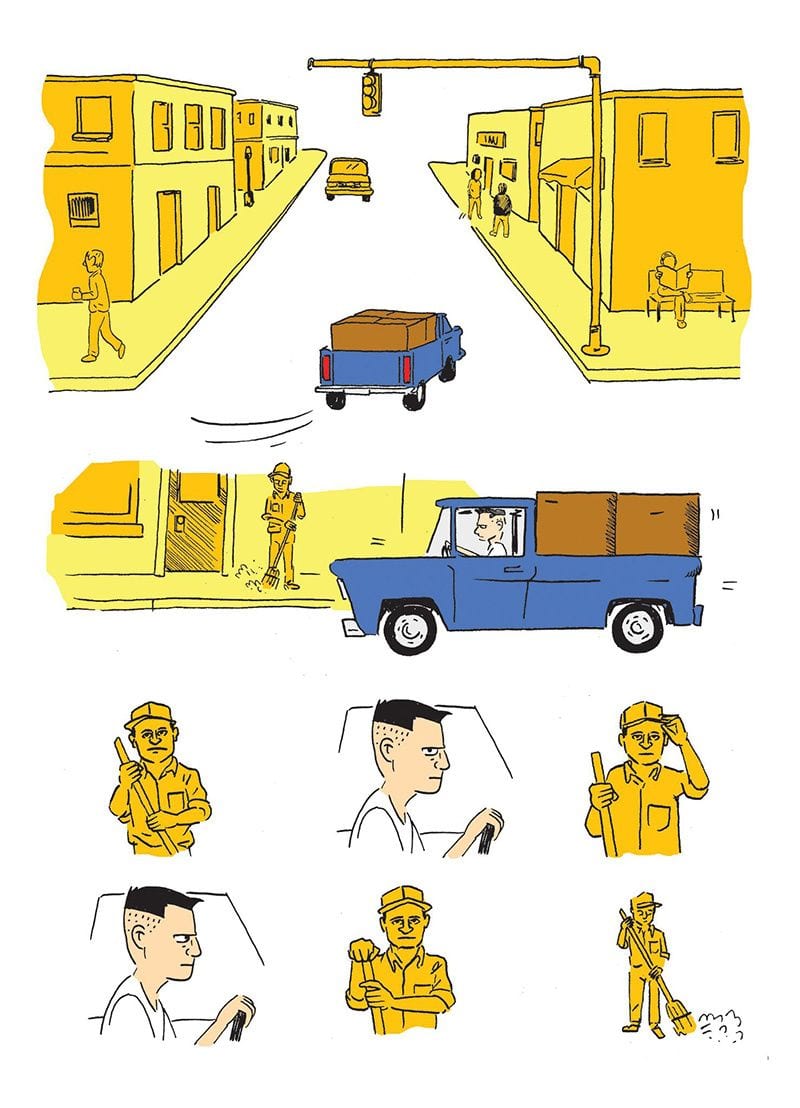 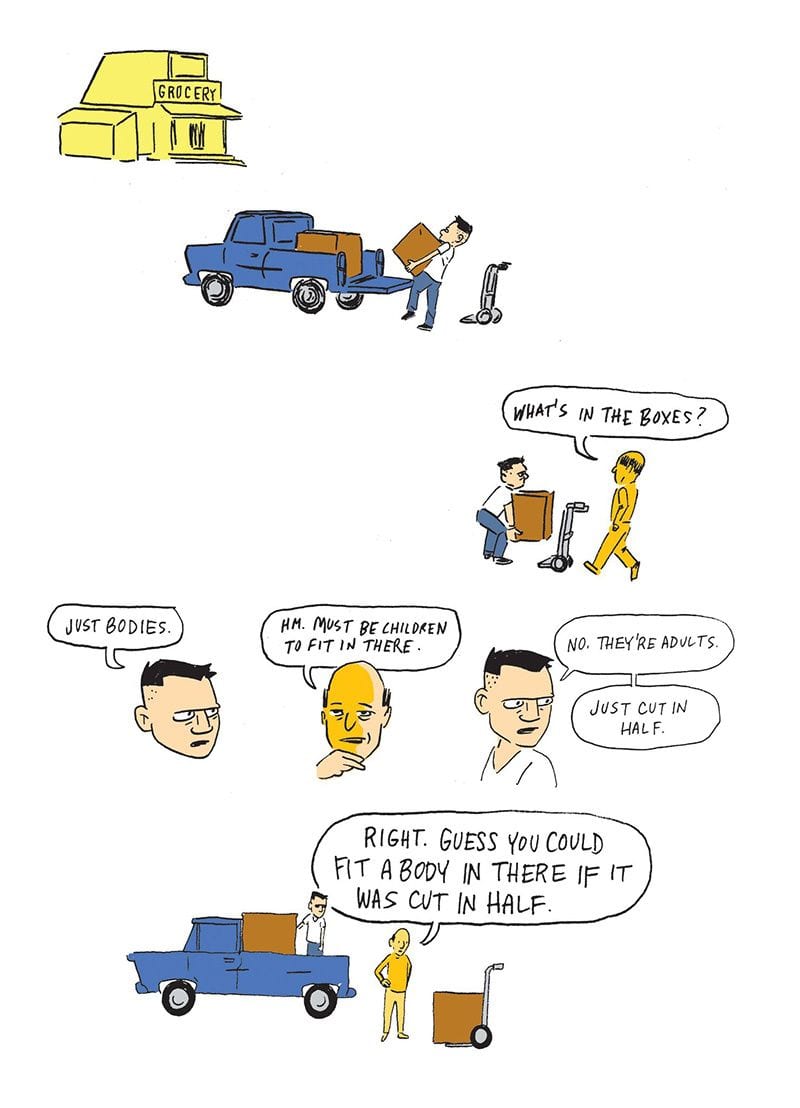 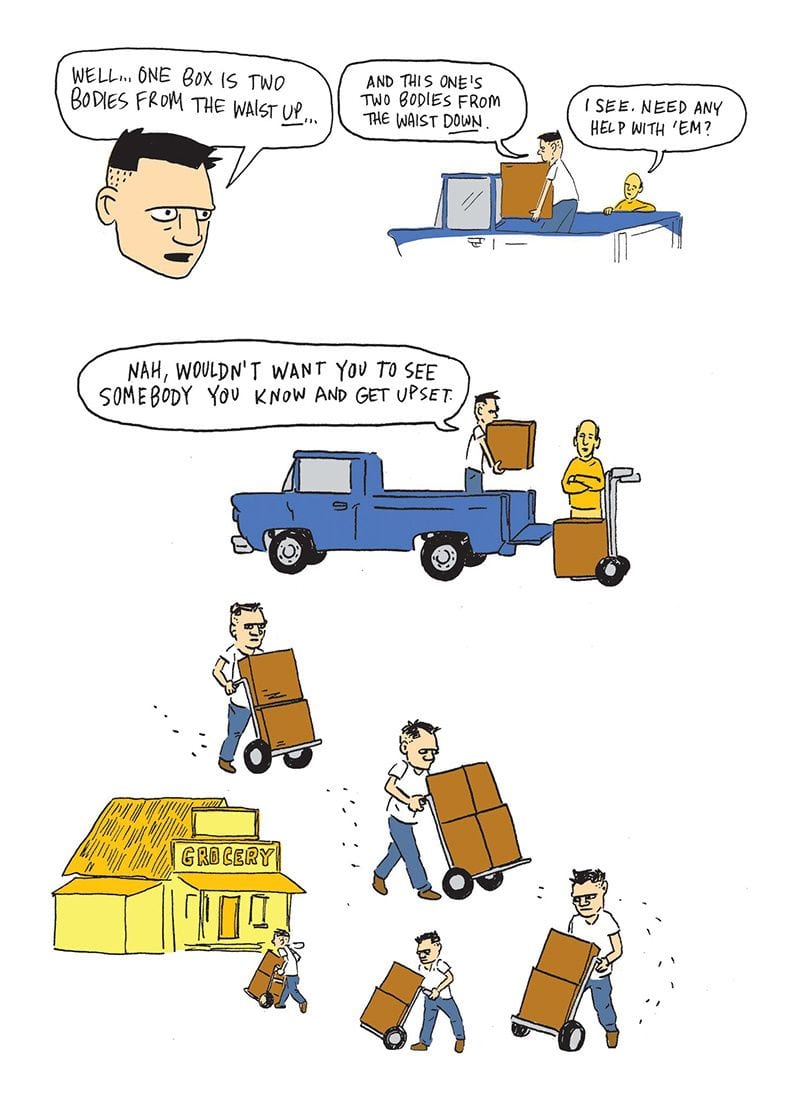 Gelgud enjoys dividing actions into paneled units—the five steps of writing on a chalkboard, the six steps of removing a t-shirt—which emphasizes the paradoxical physicality of his visually simplified world. Those panels are also unframed. When a character or other object is foregrounded on a white background, the gutters are unmarked. It’s just figures floating in whiteness with implied but unmarked borders that blur an increasingly surreal story world with the inherently ambiguous space of the gutters. The effect is most pronounced when an undrawn frame edge crops out free-floating image content—as when Gelgud’s implied camera zooms into the expanding letters on the side of a crate in a three-panel sequence: “GARBAGE”, “RBAGE”, “G”. Later, the bottom words on a sign at the town dump are cropped in half yet still oddly intelligible. Technically the obstructed letters aren’t letters, and they’re not obstructed by anything but the same whiteness they’re printed on.

Undrawn panel edges also allow Gelgud to manipulate reading paths, sometimes using a repeating figure’s movements across a white page to lead the reader’s eye in a direction that would be confusing if the figure were framed. English-based comics readers expect panels to follow Z-paths (left to right, top to bottom, same as the prose you’re reading right now), yet some of Gelgud’s pages end in the bottom left corner—while producing no confusion or not even drawing attention to that unusual fact.

Other times Gelgud’s color designs add unframed patches of color, usually with wavy edges, to define constructed settings, especially interiors. But when Daniel is in the jungle, the vegetation expands to fill the panels, with the sharp black lines of leaves and branches serving doubly as frame lines. The effect, while subtle, establishes a formal division between the house and the jungle of the title. These aren’t just locations within a formally and stylistically unified story world—they’re two different ways of representing worlds. 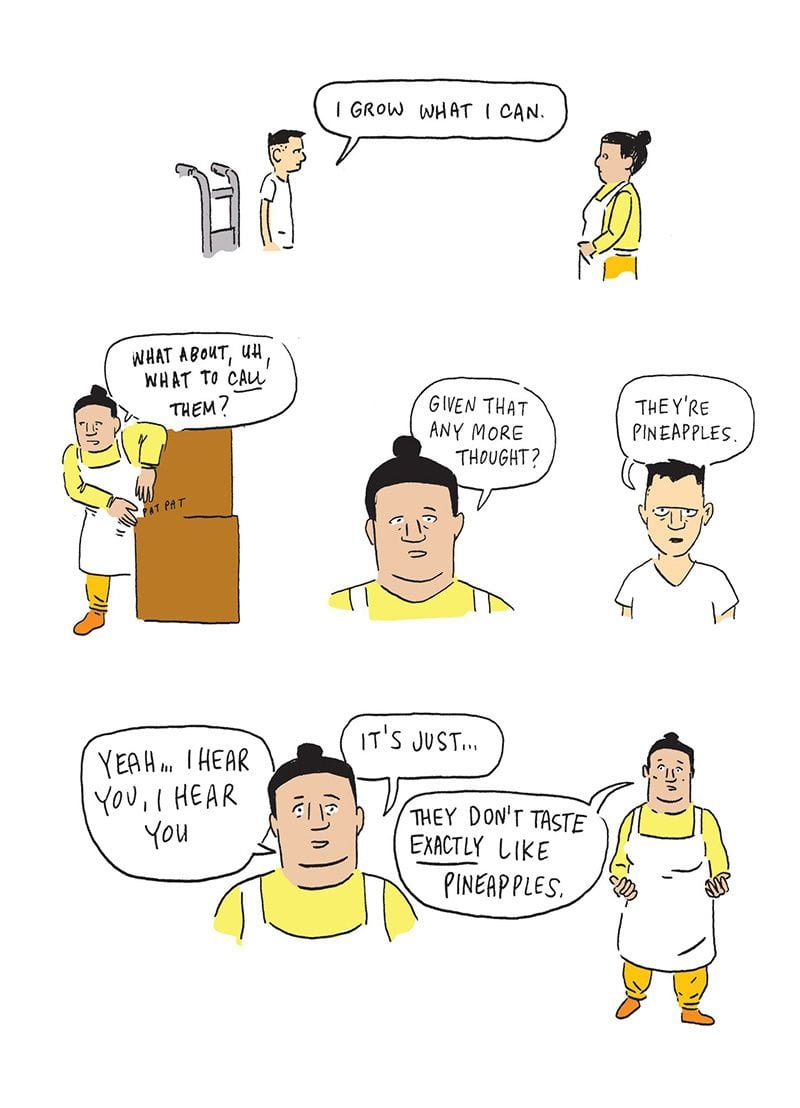 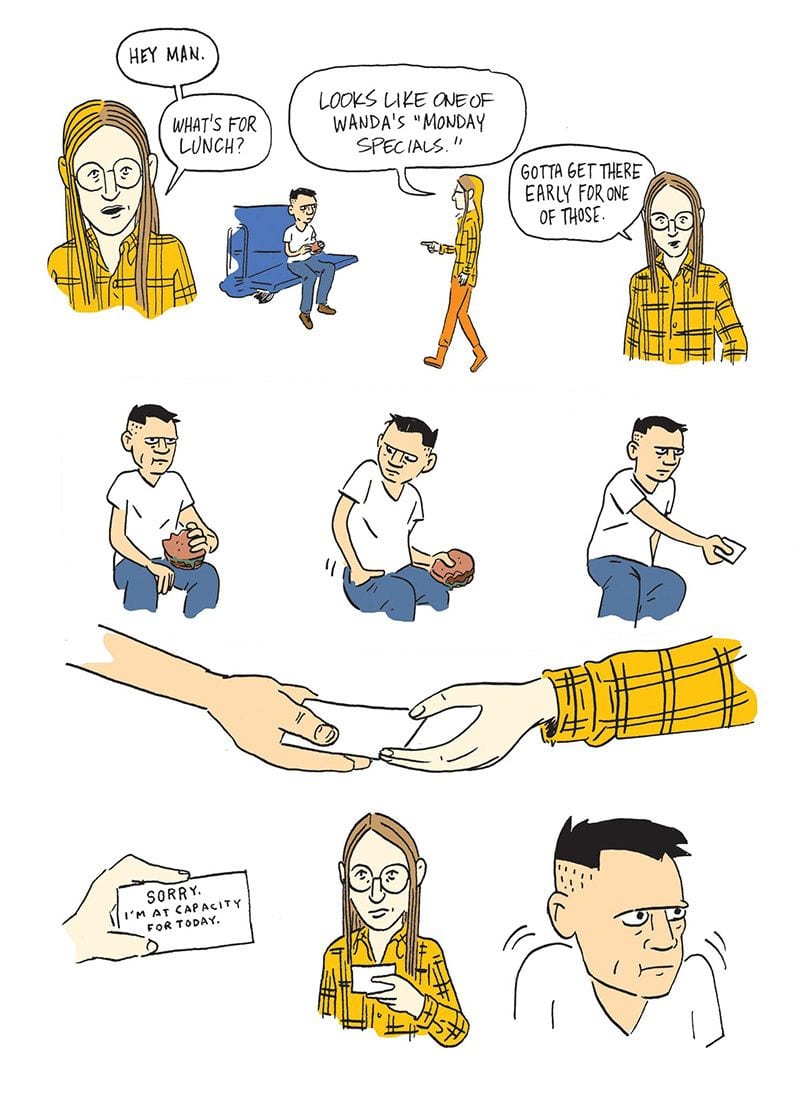 Gelgud increases the tension between content and form, between what is drawn vs. how it’s drawn, through Daniel’s attempts to transcend his reality through visions. On a page during the first attempt, Gelgud’s free-floating figures create no reading path, but instead presents objects in the guru’s room, some of them repeating for no reason, for the reader’s eye to explore in any order. In the second vision, Daniel sees a diamond shape that frames his body in a kind of panel—one that evokes the rectangular norms that the graphic novel so thoroughly rejects. In the third, the guru draws a circle on his floor—which is of course also a circle, a kind of panel frame, that Gelgud draws on the white of the page. Daniel steps in and out of it with his eyes closed, again and again and again, until he finally understands: “There is no circle.” The epiphany might be a rudimentary one for someone in the actual world, but for a character inside a comic, it’s groundbreaking.

Most of theses effects can go unnoticed, but their accumulation shifts the nature of Gelgud’s story away from standard comics norms—not unlike the way the townsfolk are slowly altered by Daniel’s addictive and increasingly hallucinogenic jungle pineapples. The guru’s circle also expands into a visual motif when the bartender stares into the same circled whiteness while wiping away spilled beer. On his fourth visit, Daniel wears a mask, and the eye holes create circular frames within the scribbled, rough-edged black of larger panels. The image-within-an-image echoes the larger world-within-a-world meta-context, one that visually expands when Daniel frames his entire house within a circle of white paint. Since it’s night, the background is grey, and Gelgud’s panels are for the first time rectangular with what is almost a standard gutter—only with its whiteness merging with the white of the circular paint where the panel edge meets it. Even though the two whites are of course the same white of the page background, one represents a painted line and the other represents literally nothing.

All of this formal playfulness occurs within a story about a person trying to reach another plane of existence. When Daniel’s attempted visions fail to transport him fully, he still feels something: “Like I’m not alone. Like I’m being watched.” He of course is being watched—by the reader holding the object that defines his entire physical existence in her hands. That’s a pretty cool way to explore the comics form. I would like to say that Gelgud exploits it fully, but the final pages of A House in the Jungle don’t quite reach the meta-potentials that the rest of the novel so artfully suggest. But the near-miss is still well-worth the close read, with the hope of more to follow. Daniel didn’t transcend his world on his first try, either.