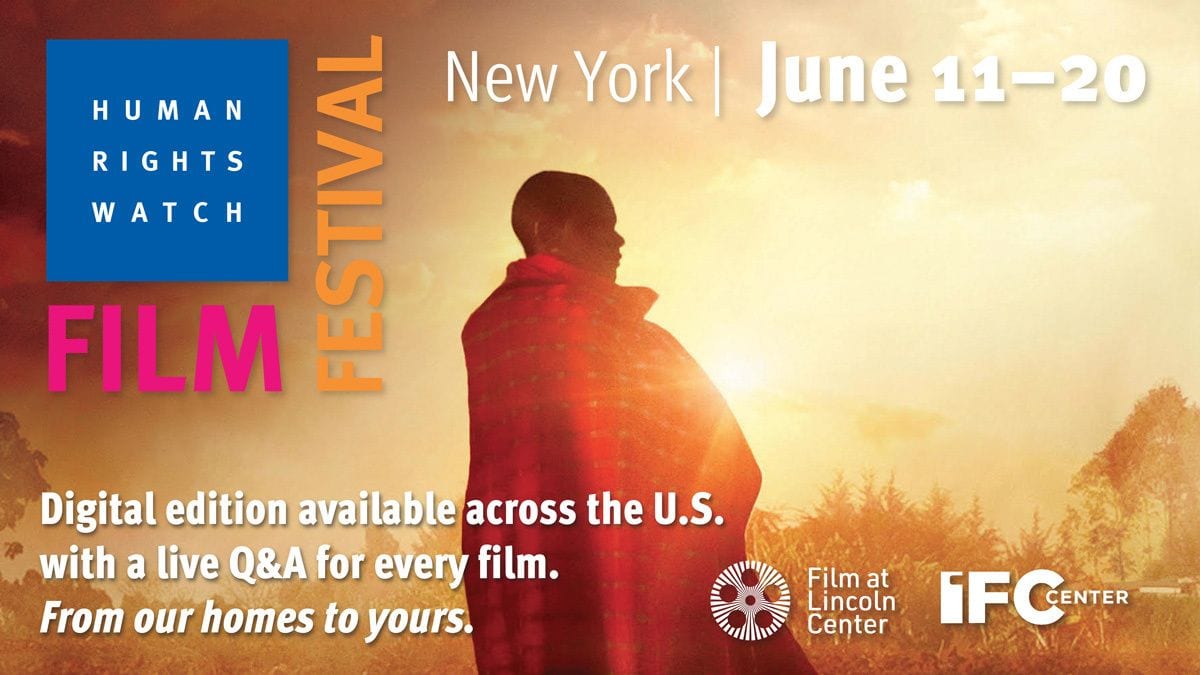 Before 2020, the multi-city Human Rights Watch Film Festival (HRWFF) had been consistently one of the smartest issue-oriented festivals on the calendar. In a time when specialty movie events have been ever more narrowly targeted (festivals devoted to food, puppetry, and so on down the rabbit hole of monomania), the HRWFF went large. It served as a global snapshot of how humanity was faring in the fight to uphold basic standards of freedom and decency for its people. The unsurprising answer tends to be a variant on: Not well.

But in this year’s curiously named New York Digital Edition (which raises the question: if it’s virtual, how can it be geographically specific?), running 11-20 June, the answer is also twisted in with a braid of battered optimism. Several of the movies in this occasionally patchy but overall strong selection highlight the efforts of the heroes putting life and limb on the line to do the right thing.

The heroes of the opening night movie, Erika Cohn’s Belly of the Beast, are the kind of steady, no-fuss advocates who burn with a quiet conviction while fighting for the rights of the forgotten and underprivileged. Cohn follows a cohort of women ranging from a punk-turned-crusading lawyer to quietly determined prisoners in their fight to stop the California women’s prison system from coercing women into sterilization.

A stunner of a legal case to have occur in the 21st century, given its echoes of the Tuskegee experiment and eugenics (whose California iteration, Cohn reminds us, was an inspiration for Nazi Germany), it navigates a range of dramatic developments, from frighteningly abusive doctors subjecting female prisoners to unnecessary procedures in often filthy conditions to a surprise whistleblower who delivers prison meeting notes in which one official praises the “cost effectiveness” of sterilizing women. Slickly produced and packing a punch, Belly of the Beast is an effective introduction to a current issue many viewers would imagine was consigned to the past.

Another batch of heroes are the determined network of activists profiled in David France’s chilling Welcome to Chechnya (on HBO 30 June). They operate a modern-day Underground Railroad that spirits LGBTQ Chechens out of their home country and strains to find them new and safer places to live.

The movie’s portrait of Chechnya is one of extreme nationalism, machismo, and religiosity coalesced into to a black hole of dehumanizing hatred. In this toxic mix of hyper-nationalism and premodern homophobia (the “shame” of having gay family members, according to one activist, “can only be washed away by blood”) suspected gays are routinely rounded up into detention camps and jail cells where they are tortured, raped, and murdered, often after being forced to denounce others.

France, whose 2012 film How to Survive a Plague remains one of the most crucial documents of the American AIDS activist movement, pivots confidently to a more journalistic approach in Welcome to Chechnya. He puts the documentary on the ground among the hunted and inside their harrowing extraction missions, replete with hair-raising escapes and impressive tradecraft (disguises, ditching phones). The film smoothly digitizes the faces of several escapees to hide their identity; the moment near the end when one of the men’s faces subtly morphs into his actual appearance is not just dramatic but surprisingly emotional.

The activists France profiles are a hardened group who weather some of the same PTSD suffered by the escapees, but often strain to do the impossible. At one point, the network exfiltrates an entire Chechen family because one of them had been identified as gay. Welcome to Chechnya is a stunner not just because of what it shows, but for its clear implication that what is portrayed is barely a fraction of the mass terror currently taking place.

Juliana Fanjul’s taut Radio Silence pays homage to odds-defying heroism of a different stripe. A cry of resigned rage paired with a portrait of journalism under siege, it lays out in quiet yet precise and chilling terms who is under state-sanctioned threat when a government becomes more interested in punishing truthtellers than criminals, many of whom are in its own ranks. A small, quiet, and intensely disciplined investigative journalist in Mexico, Carmen Aristegui was fired by her radio station in 2015, despite having high ratings and a dedicated audience. The film strongly argues that Aristegui was dismissed because of government pressure after breaking a bombshell scandal about conflicts of interest involving President Pena Nieto.

Fanjul, who narrates Radio Silence in a hushed and anxious manner, threads two narratives: A back-of-the-envelope history of the Mexican political elite’s endemic corruption and disinterest in curbing the effects of cartel violence on the people, and Aristegui’s attempt to get back on the air and continue breaking news despite surveillance, what appears to be a police-sanctioned break-in at her office, and the ever-mounting numbers of assassinated reporters. While the former is ultimately more engaging than the latter (the movie’s quiet remove drains some immediacy from its portrayal of Aristegui’s fearless truth-digging), Fanjul’s summing up of the country’s state of traumatized paralysis (“safer to be complicit through silence … horror is normal”) rings true.

One of the fest’s most fascinating entries, though, does not contain any obvious heroes and may be all the stronger for it. Ursula Liang’s impressively striated Down a Dark Stairwell delves into the tragic 2014 fatal shooting of Akai Gurley in a Brooklyn public housing tower by NYPD officer Peter Liang. Since Gurley was unarmed and appeared to be simply walking up the stairs to visit a friend, the killing sparked outrage following non-indictments of police in the deaths of Eric Garner and Michael Brown.

Further fueling anger was reports that Liang and his partner just stood by waiting for the ambulance while Gurley died. An unexpected development was then the sudden mobilization of the city’s Chinese-American community in support of Liang, whom many saw as being scapegoated for his ethnicity (in a force where less than 10% are Asian, Liang was the first NYPD officer convicted of a killing in over 10 years). At a large pro-Liang rally, “One Tragedy. Two Victims” was a common sign.

Down a Dark Stairwell doesn’t just set up two competing narratives and poke them towards fighting it out. Rather, the filmmaker looks for the ways in which both communities have felt discriminated against or pushed aside. Many of the black activists make similar arguments about systemic police violence to what is being heard now on a wider scale after the police killing of George Floyd. Though even that gets complicated: A number of Asian activists loudly call for Liang’s imprisonment, while in a fascinating aside, the movie captures two young black men arguing about how much sympathy to have for what cops like Liang go through; the one who has been beaten up by the police has far less patience for that argument.

While the Chinese activists are marching in support of Liang, they are also making a stand after years of invisibility. Cogent, provocative, and densely layered, Down a Dark Stairwell refracts a diversity of voices needing to be heard through one painful event without needing to turn it into one simple lesson.

Issues of American systemic discrimination are addressed from a less expected direction in Shalini Kantayya’s Coded Bias. Centered around research conducted by MIT Media Lab researcher Joy Buolamwini, the documentary—largely issue-oriented but also an engaging if inadvertent portrait of politically engaged female technologists—is one of many recent takedowns of the myth of technological impartiality.

After finding that a facial recognition software literally could not work on her black skin, Buolamwini started looking into how “people embed their own biases into technology”, particularly artificial intelligence. Those biases can often be subconscious, for example: Largely white male coding communities using images of people who look like them to create a data set that allows an AI to learn. High-spirited and almost giddy with geeky energy, Buolamwini is a superb guide to the issue.

The documentary is energetic and mostly on-point, though somewhat unfocused when it tries to rope in larger arguments around omniscient surveillance and does not give other issues (racial biases in AI algorithms used by courts to determine prison sentences) enough space. One hopes Buolamwini is given a wider forum to remind the world that algorithms are only as fair as they are consciously designed to be.

As ever, a few of the fest’s movies suffer from a lack of editorial direction despite all the best intentions. Christina Antonakos-Wallace’s From Here appears initially to be an examination of how immigrants and children of immigrants can struggle to find themselves in their home or adopted countries.

But in flipping back and forth between Berlin and New York, the film’s intermittently engaging pocket portraits of people caught between cultures—ranging from a Bolivian-American Dreamer to a Sikh musician (the highly charming Sonny Singh, from the band Red Baraat), Vietnamese artist, and Roma activist—fail to add up to a coherent study.

Similarly, Sanjay Rawal’s Closing Night movie Gather cannot quite deliver on its wide-ranging promise. Packaged with an eye-popping array of sweepingly gorgeous vistas captured in a range of reservations, the film aims to show how disparate groups of Native Americans are striving to celebrate and reconnect their people to the culinary culture of their past.

There are gems here, from the beautiful scenes of the Yurok tribesmen fishing for salmon in the fog-shrouded rivers of Northern California to the intensity of Apache chef Nephi Craig’s infectious passion for locally-sourced indigenous cuisine. Indeed, Rawal’s documentary has a lovely feel and contains the start of a necessary conversation about issues from food sovereignty to the legacy of colonial trauma (addiction and abuse shadow many of the conversations).

But despite the rich source material and engaging characters on hand, Gather more often feels somewhat thin and repetitive.

The fest’s 2021 edition will probably have a wealth of topics to present. For all the wrong reasons.