The pre-credits sequence is edited for maximum disorientation and confusion without the viewer totally losing the thread of a plot. The rest of the film will continue this style of cross-cutting and ellipsis, occasionally to an almost avant-garde degree, while remaining just within the bounds of a traditional narrative. The movie’s penchant for cutting away from escalating events and leaping forward without further explanation may leave viewers wondering if something was left on the cutting-room floor or if the movie was somehow assembled from unfinished footage. But no. It’s a stylistic choice for a narrative that looks straightforward and “classical” but feels confusing, opaque and, well, impulsive.

Here’s what happens. In a series of fragmentary images edited by David Holden, animals wander in the wild, bunnies nibble on grass, birds flock freely or live in cages, a dog lolls on a well-trimmed lawn, and a strange concrete bunker resides in the woods. Then comes a montage of the town’s citizens at work or rest, including children, a barber, and a woman at a sewing machine. Then the ominous rumble of an earthquake, things falling off shelves. Objects break and tumble: a rain gutter, a window. The disruption passes and people rush outside. Unknown to the townsfolk and possibly ungrasped by the viewer, the concrete bunker is now riven with cracks.

With no apparent passage of time but actually sometime later, we cut to an equally disorienting montage of city life. Jennifer (Meg Tilly, a trained dancer) is rehearsing with her ballet company. Stuart (Tim Matheson) is a young doctor in residency. We glimpse him in a flurry of interrupted motions: in the operating room, changing his shirt, stuck in traffic, rushing obliviously past contemporary art as seen from overhead. During all this frantic action, we keep cutting to Jennifer poised, self-contained, in her balletic flow. While he’s the man of action, she’s the person with a reserve of inner strength, an oasis of serenity.

In an especially disjunctive edit, an anonymous hand holds up a telephone receiver for Jennifer. On the other end is her mother, babbling incoherently in an accusatory tone, calling Jennifer “nasty” and “a slut”. We see Jennifer cleanly and classically framed in luminous profile. We see the mother from behind, half out of frame, wavering and uneven, and catch glimpses of photos on the table amid a revolver, which mom grabs. Jennifer responds with shock and confusion up to the moment she hears a gunshot. A young man working on the fence at mom’s farm also hears the shot and runs inside. 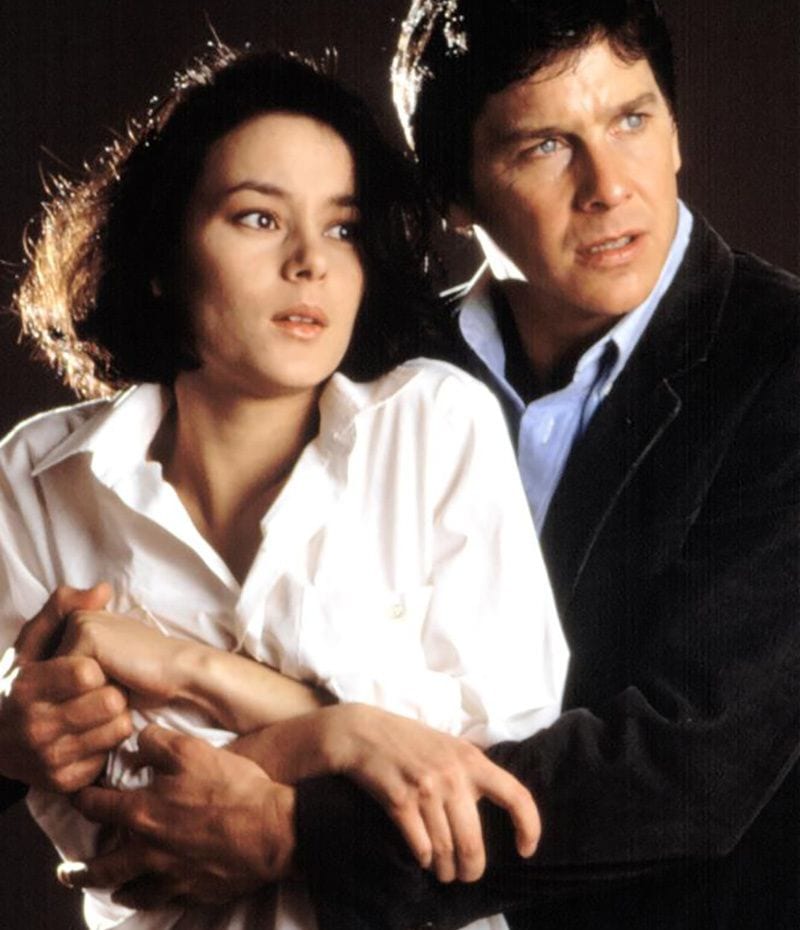 When the credits begin, Jennifer and Stuart are on the bus arriving across the suspension bridge into Jennifer’s small hometown as Paul Chihara‘s Americana-esque score offers lush and melancholy themes. We will learn that the mother isn’t dead yet, but this will most emphatically be a film about death, specifically the death of an iconic small town of front porches and Main Street and soda fountains and presumably all that it symbolizes historically and socially.

The other characters include Jennifer’s father (John Karlen), a dairy farmer of religious convictions who makes it clear he doesn’t expect the unmarried Jennifer and Stuart to sleep in the same room; Jennifer’s surly brother (Bill Paxton), the young man who found their mother; kindly Dr. Carr (Hume Cronyn), the typical small town sawbones; and Jennifer’s seemingly bi-polar friend Margo (Amy Stryker), who represents “the path not taken”. While Jennifer left for the big city, Margo stayed behind for the wife-and-mother thing with a local boy. When Jennifer suspects domestic abuse, Margo sneers “You think it’s easy to have children?”

By degrees, Stuart and Dr. Carr begin to suspect the town may be contaminated by something that lowers people’s inhibitions, as there’s no other way to account for the irrational, anti-social flare-ups that increase with each passing day. What kind of poison can this be?

Where another film would have dwelled more or less gleefully on set pieces of the town carnage, for example the self-destructing town in Fraser C. Heston’s Needful Things (1993), this film keeps cutting away from such elements to concentrate on the confusing and insular personal dramas of Jennifer and Stuart, which are interwoven without their having the same experience at all. In a crucial detail, the film’s last “impulsive” act of violence will be committed by the one person who remains uncontaminated, thus emphasizing that these impulses originate within the human animal rather than being imposed from without.

Director Graham Baker’s commentary isn’t exactly lively and info-packed, but he does clarify one or two points left ambiguous by the elliptical style, thus casting a fresh light on the motivations of the family at the heart of the events. He mentions at least one moment that did end up being removed, but most of the film’s ellipses feel deliberate and come from a tendency for reticence and indirection that keep the story’s unraveling as elusive as possible.

He explains the project’s origin in a script called Animals by Nicholas Kazan, which Baker calls “a straight-up horror story” to be directed by Lewis Teague. Baker states that Teague got called to another commitment, presumably either Cujo (1983) or Cat’s Eye (1984), and that Baker took the project in another direction with a rewrite by Don Carlos Dunaway, who also worked on Cujo. Baker was between the equally anxiety-ridden stories of Omen III: The Final Conflict (1981) and Alien Nation (1988).

At some point, Kazan chose to adopt a pseudonym, “Bart Davis”. Kazan, son of Elia Kazan, next scripted another dark rural film, James Foley’s Pennsylvania crime-family saga At Close Range (1986). That was based on a true story, as were his other chronicles of American discontents dating from this period: Graeme Clifford’s Frances (1982), Paul Schrader’s Patty Hearst (1988, one of the decade’s overlooked masterpieces), and Barbet Schroeder’s Reversal of Fortune (1990).

Baker compares the concept to George Romero’s The Crazies (1973), a film that influenced Jeff Lieberman’s Blue Sunshine (1978) and many other chemical-zombie tales that, in a way, intersect with the “nature’s revenge” subgenre. Leonard Maltin’s film guide describes the film unfavorably and not quite convincingly as a reversal of Don Siegel’s Invasion of the Body Snatchers (1956); that is, everyone has too many emotions instead of being drained of them.

Watching Impulse gives me a vibe similar to Gary Sherman’s small-town horror-mystery Dead and Buried (1981), in my opinion another of the decade’s overlooked masterpieces. Maybe there’s also a dash of the small-town hysteria in Michael Laughlin’s Strange Invaders (1983), a movie set in “Centerville”. And perhaps, just perhaps, the film hints at a tinge of Costa-Gavras’ Betrayed (1986), yet another of those masterpieces. Something in those years of Reagan’s America brought out the bleakest suspicions of the heartland.

Baker declares that in working with designer Jack T. Collis, photographer Thomas Del Ruth and the actors, he kept using Norman Rockwell’s paintings as his reference point, and that he wanted to ask “What’s wrong with this Norman Rockwell picture?” We can’t help thinking that perhaps Grant Wood’s American Gothic slips an oar in. In one early scene, Stuart whispers “and a wonderful life”, ironically evoking a classic Frank Capra movie.

In 90 minutes, the narrative’s downward spiral is handled efficiently, perhaps all the more so for omitting so much in terms of exposition and even action. In the end, as at the beginning, Impulse is a movie about its own disorienting mood and the loss of control. You can go home again, all right, but it’s a pain. The sunny bucolic setting of this nightmare makes it all the more discomforting.