The autumn of 2019 has begun, but Incubus fans are getting ready to party like it’s 1999. This is because Incubus has launched their “20 Years of Make Yourself and Beyond” tour, in which they are celebrating the 20th anniversary of their breakthrough LP Make Yourself. The Southern California alt-rockers are slated to perform the album in its entirety each night, for starters. The band’s third album found them stretching out to develop their sound and spiritual vibe, achieving new levels of both artistic daring and commercial success. Fans in the San Francisco Bay Area are therefore packing the Masonic Auditorium in the city’s Nob Hill area for the occasion.

“While writing Make Yourself, I figured out my voice as a singer and how to write more legible lyrics,” singer Brandon Boyd told Entertainment Weekly earlier this year. “These songs just kind of spilled out of us, and because of this record, we went from playing in bars and opening up for bands to headlining.” Incubus had a vibrant and raw sound going on their first two albums that blended hard rock, funk, punk, and some psychedelic power pop in intriguing fashion. But Make Yourself found Incubus refining their sound to become an alt-rock powerhouse, which also included some deep lyrics from Boyd that made him stand out from the hard rock pack.

Why Incubus is playing two nights indoors here at the Masonic instead of one night outdoors at Berkeley’s Greek Theater across the Bay is a question mark. The Greek Theater possesses far better sound with its natural acoustics than the typically muddy Masonic, as well as a better vibe all around thanks to the majestic outdoor setting. But so it is as the band opts for the grungier Masonic, perhaps a throwback to earlier days. 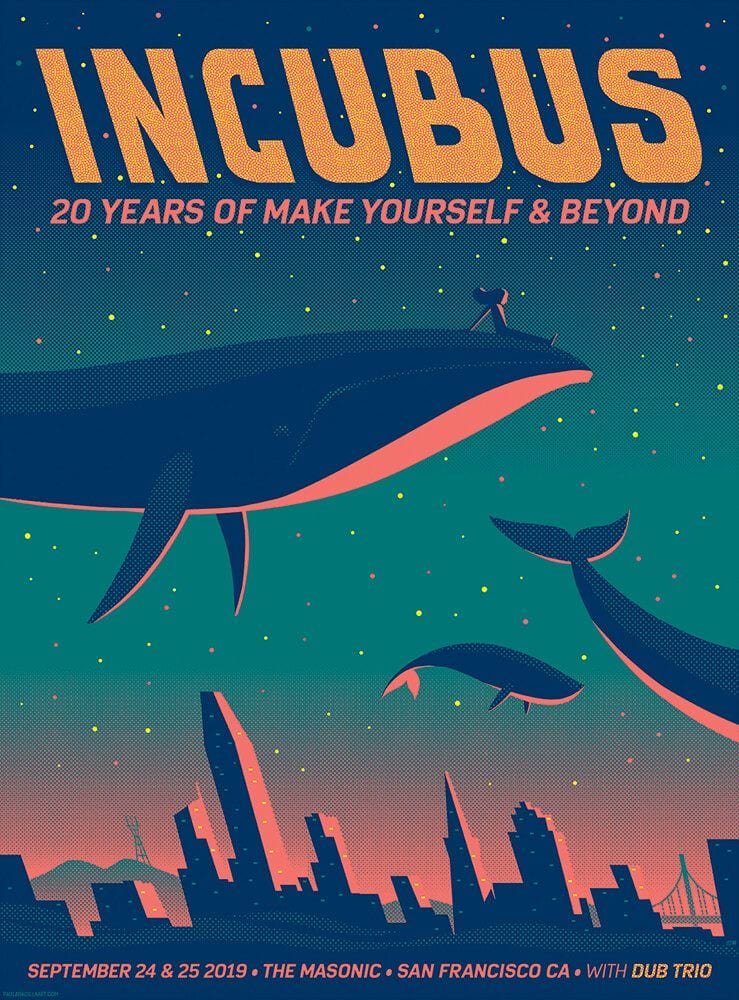 Dub Trio out of Brooklyn opens the show with a solid 30-minute set, throwing down a genre-blending sound that mixes metal, alt-rock and sludgy psychedelia. The clarity of the trio’s heavy sound is challenged by the boomy acoustics here at the Masonic, but the band seems a good match to get the vibe going for Incubus. Reformed after a three-year hiatus and touring behind their new album The Shape of Dub to Come, the band brings a decidedly heavy sound to the stage but with some interesting flavors and unpredictable accents.

“We were a dub/reggae band, and we started implementing what we thought was cool from The Refused and bands like that,” explains bassist Stu Brooks at the band’s website. “The Shape of Dub to Come describes our whole method; applying dub as a process to virtually any style of music. The future of dub doesn’t have to be just reggae. It’s a process rather than a genre.”

The vibe surges significantly when Incubus hits the stage with the hard-hitting album opener “Privilege”. The mix of hard rock crunch from guitarist Mike Einziger over a big groove with hip-hop flavor from DJ Kilmore is a big part of what Incubus figured out how to perfect on Make Yourself. “Nowhere Fast” is another prime example with a heavy opening section giving way to a spacey funky breakbeat verse section and soul searching lyrics from Boyd singing, “Will I ever get to where I’m going, and if I do will I know when I get there?” It was on this album where fans really got to know Boyd a little better and realize that he’s one of the more philosophical singers Gen-X has ever produced, with intriguing metaphysical interests as well.

The sound is still a bit rough even in the lower level, so those who really want to get some crisp sound must man up and descend into the pit. The trippy sound of “The Warmth” mixes things up, with drummer Jose Pasillas and bassist Ben Kenney laying down a warm mid-tempo groove as a platform for Einziger’s trippy sonic landscapes and Boyd’s emotive vocals about not letting the world bring one down. The song also turns out to be the inspiration for tonight’s limited edition show print, a beauty from artist Paul Abadilla depicting whales flying over the San Francisco skyline.

The set ignites to a higher level during “Stellar”, a romantic sci-fi rocker the likes of which has rarely been seen in modern rock as Boyd sings of meeting a flame in outer space over an infectious hard rock progression. “Stellar” then leads into the heavy title track, another gem where Boyd continued to develop his voice of a generation type of status in singing out for independence of thought and spirit in a world that tries to mold us into conformists. The smash hit single “Drive” taps into this emotion as well, with the adoring audience reveling in the song’s empowering message about taking the wheel of your own life as they sing along. As the album progresses on stage, the seamless flow that’s always made it a great listen shines through as Incubus takes the audience on a genuine sonic journey.

One of the most coveted deep cuts is “Battlestar Scratchalactica”, a super funky tune featuring the dynamic turntable work of DJ Chris Kilmore. The song turns out to be a solo performance by Kilmore rather than the full band version some were hoping for, but it’s still great to finally hear in concert.

A peak moment occurs with the scintillating “Pardon Me”, one of the most dynamic tunes in alt-rock history. The audience explodes in solidarity as Boyd sings out over a huge wall of sound about “The burdens of the planet earth, Like gravity, hypocrisy, and the perils of being in 3-D, But thinking so much differently…” The crowd joins in unison on the chorus for a big singalong of “Pardon me while I burst into flames, I’ve had enough of the world and it’s people’s mindless games.” While originally released in the fall of 1999, the song started getting heavy airplay in the wake of the 9/11 attacks two years later, providing a prophetic zeitgeist message that resonated so deeply after that historical turning point. “Out From Under” makes a great closer to the album, following “Pardon Me” with another infectious heavy tune about resisting the status quo.

The “And Beyond” portion of the show begins with the new single “Into The Summer”, featuring some trippy power pop and a seemingly Lost Boys-inspired video about teenage vampires. “Vitamin” from 1997’s S.C.I.E.N.C.E delivers a deep psyche-rock blast from the past, with the band throwing down an incendiary version of the alt-rock deep cut. The energy continues to grow on “Sick Sad Little World” from 2004’s A Crow Left of the Murder, a heavily syncopated tune that highlights the power trio precision of Einziger, Kenney and Pasillas. It’s become known as the song where Incubus will stretch out and jam a little, and so it is here as Einziger rips an extended guitar solo to rock the Masonic into deep space. “State of the Art” from 2017’s 8 album provides a melodic groove that builds in dynamic fashion as Boyd delivers heartfelt vocals while Einziger conjures some trippy sonic landscapes, before a crunchy chorus in classic Incubus fashion.

One of 2019’s most electrifying moments in live music occurs next as the band launches into their classic “Megalomaniac” from 2004 to close out the set. News has broken earlier today (September 24) that the Democratic Party has finally opened a formal impeachment inquiry against Donald Trump, and so the tune that once seemed to point to George W. Bush takes on a renewed zeitgeist urgency. This crowd is absolutely loving it as the Masonic explodes with what feels like a blast of energy for political revolution, with the audience joining Boyd to shout out a message for Donald Trump and his foul regime: “Hey megalomaniac, You’re no Jesus, Yeah, you’re no fucking Elvis, Special, as you know yourself, Baby, just step down, step down!”

Full alt-rock catharsis has been achieved here tonight in a way few other bands can match, for there are all too few other alt-rock bands from the ’90s still keeping it going here in 2019. Incubus returns to the stage with a big encore of “Wish You Were” from 2001’s Morning View, the blockbuster follow-up to Make Yourself that cemented the band’s place as global rock stars for the 21st century. The Masonic ignites one more time as the band delivers their classic tune about moving on from a broken relationship to find peace again (including signaling some UFOs with one’s lighter at the beach.) Fans can only hope that Incubus will deliver a similar tour to celebrate Morning View in 2021, arguably their best album of all in how it built on Make Yourself.