Maybe 2054 won’t be so bad. Press a button and a fully prepared meal appears. Nap while your bed-shaped car drives you to work. Answer calls without picking up a phone. Let your Googleland brain implant monitor and adjust your chemical health, while McBody takes care of the rest. Watch a livefeed of the solar eclipse in the privacy of your own VR. Attend a Jimi Hendrix concert. Travel to fantastical landscapes and transform into impossible creatures. Have polar bear sex. Have snail sex. Set your implant to methylenedioxymethamphetamine mode.

There are some downsides too. The north pole is floating in the center of the Arctic Ocean. All the pizzas and tacos and sushi you’re eating are made from fungus because most animals are extinct and nuclear waste poisoned the oceans that flooded the coasts. The world supply of oil will run out in a few years, and you were just laid off from the last refinery that wasn’t run by robots. Unpredictable extreme storms have eliminated all air travel.

You stopped playing Call of Duty because the advanced levels may be secretly hooked to military drones for actual combat missions run by the government. Commercials happen directly to you, with annoying company mascots literally in your face. The content is suggested by your recent thoughts. Oh, and that live feed of the solar eclipse was from a Starbucks satellite orbiting above permanent clouds of pollution.

This dystopic future is the product of Inés Estrada‘s disturbingly plausible imagination, beamed into readers’ heads via the antiquated analog technology of ink and paper. When her characters Eliza and Charly logout from the solar eclipse, Estrada draws the Starbucks logo flashing inside their eyes. Readers just have to turn the page. The physicality of the book is always an appeal of graphic novels, but it is rarely so thematically critical to the story it contains. Eliza and Charly are trapped in an alienating virtual reality while we view them inside Estrada’s 3×2 comics grids. 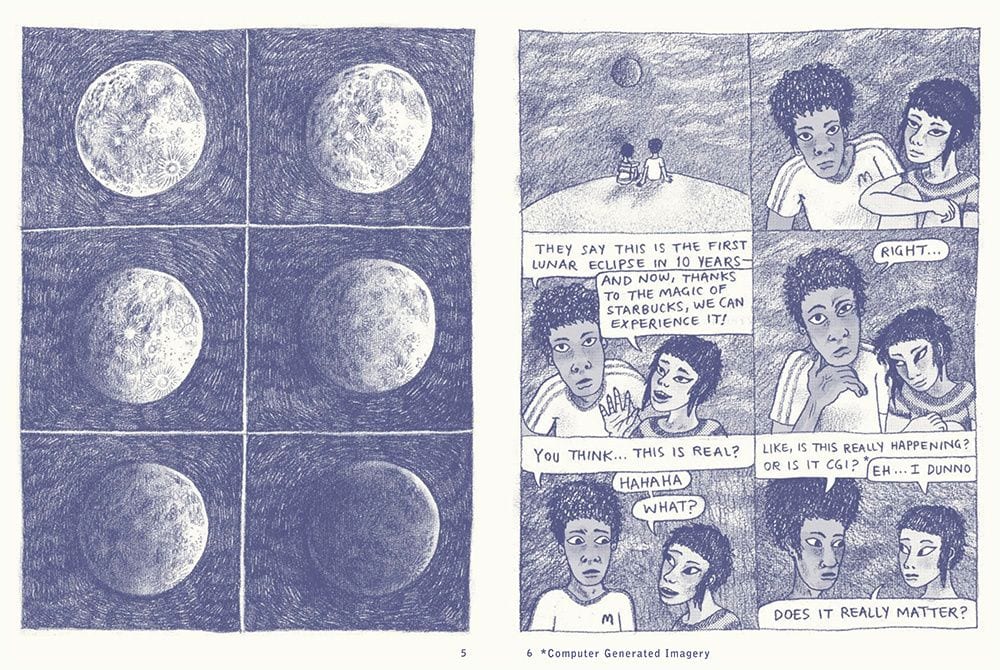 That two-wordlness plays out the level of style too. Estrada typically draws Eliza and Carlos as rudimentary cartoons, the lines of their bodies, like the lines of their apartment walls, containing little crosshatched detail. They’re literally and metaphorically empty. But when they go online, Estrada upgrades the CGI to detailed naturalism. Eliza floats in layers of meticulously inked cloud banks, the progression of their evolving shapes receiving their own page grid of near abstraction.

When she gazes at her reflection in a forest pond, the surrounding vegetation approaches photorealism. Estrada captures the quality of light reflected off of gently bobbing water as Charly floats, every kink of his hair precisely etched. When they are talking in their apartment, Estrada renders their bodies with sack-like simplicity, their anatomy more implied than shown. But when virtually floating underwater, the careful contours of their forms reveal the depth of Estrada’s drawing skill. 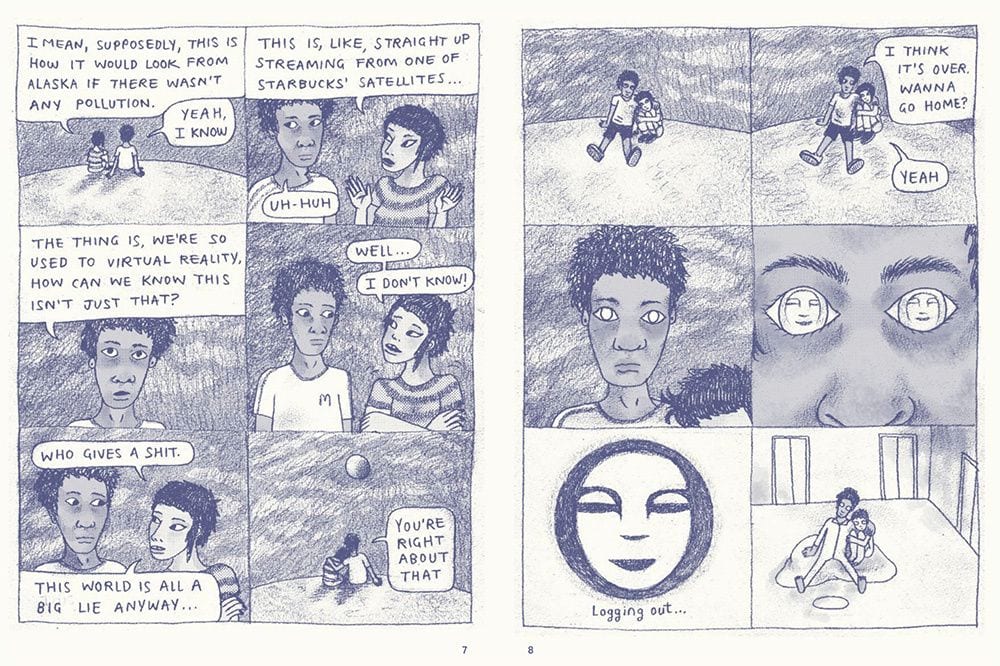 Her grandfather calls her (by his hand-held cell phone) about the bad omen of a beached whale, extending their tribe’s colonization by Europeans and their descendants to the level of technological exploitation as their bodies are invaded by artificial organs. Like Estrada, Charly is from Mexico. When he virtually visits home, half of the dialogue is in Spanish with footnote translations breaking the narrative flow for monolingual readers such as myself. It’s a smart choice because it pushes against the kind of effortless absorption that the virtual technology represents. Sometimes it’s good to have to work harder.

The footnotes also include the proto-links of choose-your-own-adventure technology, with six of the virtual scenes ending with a direction to “Return to pages 86-87 à” where the two-page spread offers a mid-story table-of-contents of the time-killing activities Eliza and Charly employ while waiting out the most recent storm. Only this time the storm waits out them when they lose internet connection for days. This result is boredom, actual rather than virtual sex, and most importantly, dreams—the original, biological version of VR.

The problem is Eliza and Charly have already been having trouble distinguishing what is real and not real, and whether the distinction still means anything. Charly’s violent past has been haunting him in hallucinogenic flashes of Eliza’s corpse (a fear that briefly comes true). Estrada explores the theme at the meta level too, with Eliza asking, “Why do I feel like I’m still being watched?” (Because she is, by us). Later she notices the fourth wall of her own comics panel and climbs out of the grid and into the open page—only to startle herself awake. More subtlety but weirdly, she refers to one of her earlier virtual adventures (an unfortunately R. Crumb-esque pornographic one) as something she read in a comic—which it was for readers, but not for her.

There’s a central plotline involving Eliza’s brain transplant getting hacked and the world’s A.I.s searching for a human host to create a hybrid biological/artificially-conscious baby. Though Estrada’s glossary-like endnotes assure readers, “Don’t take anything too seriously, after all …. this is just a comic!”, she also refers to the “current exponential development of AI” and, oddly sandwiched between the copyright and ISBN notices, “Climate change is real. The earth is alive and we’re killing her. Technology is not the enemy: oppression, greed, & exploitation are.” It’s a fitting final word to her not-so futuristic dystopia. 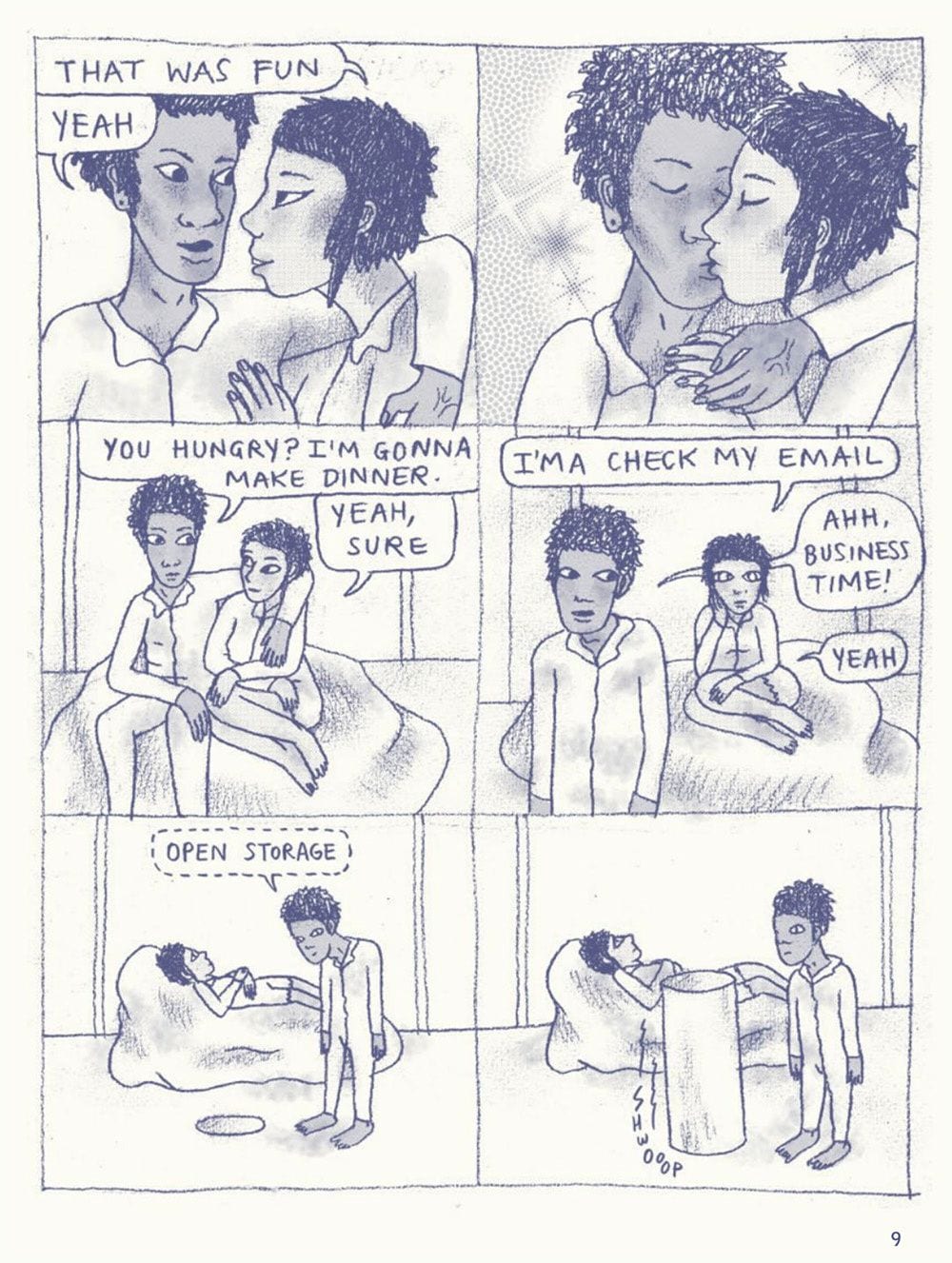