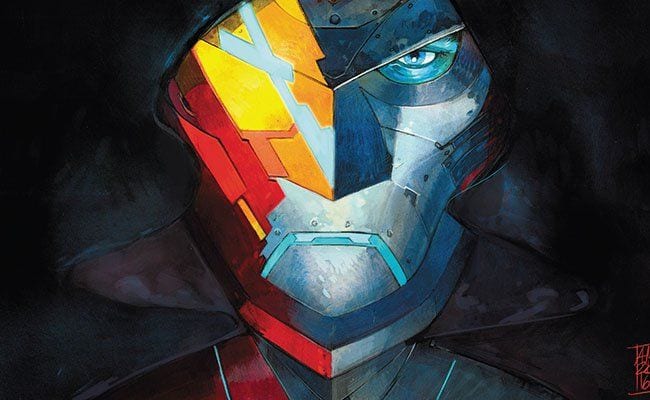 It’s become an annoyingly popular trend in recent years, turning heroes into villains and villains into heroes. It’s like Marvel and DC Comics are trying desperately to make their own version of Walter White. They want a character who can fluctuate between heroism and villainy without the aid of mind control, evil clones, or shape-shifting aliens.

It’s entirely understandable. A character that can navigate these narrow, poorly defined lines between heroism and villainy tends to be much more compelling than the average do-gooder/bad boy. We don’t know if this character will help rescue a cat in a tree or just set the tree on fire. They’re unpredictable and volatile, never needing more than a friendly nudge to cross those lines that Superman and Captain America don’t dare cross, at least without the aid of massive retcons.

This is what makes the premise of Infamous Iron Man #1 so compelling. It attempts to turn Marvel’s alpha dog villain, Victor Von Doom, and into a genuine, non-mind controlled hero. That’s right up there with making Thanos a nun in terms of seemingly ridiculous concepts. However, Doom’s development in the pages of Invincible Iron Man, coupled with the end of Secret Wars, puts him in a unique position to do just that. Now, Brian Michael Bendis is ready to realize that potential.

The details of the story in Infamous Iron Man #1 don’t involve Doom just stepping into a new suit of armor, calling himself Iron Man, and shooting the nearest Hydra agent. Instead, Bendis crafts a narrative that makes abundantly clear that Victor Von Doom is uniquely qualified to embrace this role. He makes it feel like a natural progression of the character that emerged in Invincible Iron Man. This is a version of Dr. Doom that has a very different outlook after the events of Secret Wars. What he does and why he does it feels organic, appropriate, and uniquely engaging.

There’s no inversion spell. There’s no clone involved. There’s not even some sudden moment of clarity. Victor Von Doom’s decision to become Iron Man fits perfectly with his ongoing efforts to do more than just terrorize the world with metal masks, evil boasting, and Doombots. He’s trying to find a new place in the greater Marvel landscape and becoming Iron Man, especially in wake of Civil War II, is as fitting a place he’ll find without the aid of Doombots.

What makes this setup even more compelling is the context surrounding Dr. Doom, even before the events of Secret Wars. Bendis makes it a point to explore this context, going back to Doom’s days in the Illuminati where he didn’t shy away from such infamy. In doing so, Bendis raises some important questions for Dr. Doom, courtesy of the Red Hood. Sure, these questions get the Red Hood shot and transported to India, but they’re still valid questions.

Now, Reed Richards and his family are gone. His mastery of science and sorcery is beyond dispute. He even managed to finally save his mother’s soul. On top of this, he has his own country, more money than any super-villain can reasonably steal in one lifetime, and an army of Doombots to ensure he’ll never have to clean his castle or cook his meals. What else is left for Victor Von Doom?

Infamous Iron Man #1 shows that Dr. Doom has plenty to offer. He demonstrates as such in a lopsided, but revealing battle against Diablo, who for some reason thought kidnapping Maria Hill was a good idea. He also connects with Tony Stark’s former lover, Dr. Amara Perera. He articulates through words, actions, and Alex Maleev’s detailed artwork that there’s a need in the Marvel universe and he’s uniquely equipped to fill it.

Moreover, Doom makes the prospect of him being Iron Man seem exciting in the sense that we’ve never seen an Iron Man like this before. Tony Stark may have exercised questionable decision-making skills, both in and out of his armor, but there are lines he doesn’t cross. He makes clear that when there’s a conflict to confront, he’ll play the part of the hero. With Victor Von Doom, we don’t have such certainty.

How will Dr. Doom deal with a Hydra invasion of New York? How will he deal with the likes of the Mandarin, AIM, or angry Stark Industry shareholders? It’s clear how a hero would handle them. It’s not at all clear how Victor Von Doom will handle them and that’s what makes the idea so compelling.

In the end, this idea is the greatest selling point of Infamous Iron Man #1. It gives context and reason for Dr. Doom taking on the mantle of Iron Man. Beyond that idea though, the details are fairly standard. There is some action, some significant character drama, and some mysterious reveals. However, some of these details are too short or abrupt. These are details that can easily be fleshed out in future issues, but it limits the substance of the story.

Despite this, the style points alone make Infamous Iron Man #1 one of the most intriguing development not involving a superhero civil war in quite some time. There’s still something uniquely off-putting about rooting for Victor Von Doom to become a hero. He still makes clear that he’s Dr. Doom. He still comes off as the kind of man who will punch Reed Richards in the jaw and blame the Avengers for it.

However, he also comes off as a character entering an exciting new phase of his development. He’s not hiding from his infamy. He’s channeling it into a new endeavor. It may not be as satisfying to him as punching Reed Richards in the jaw, but it gives him a bold new purpose. Whether it makes him famous or infamous remains to be seen, but it promises to be an exciting story.