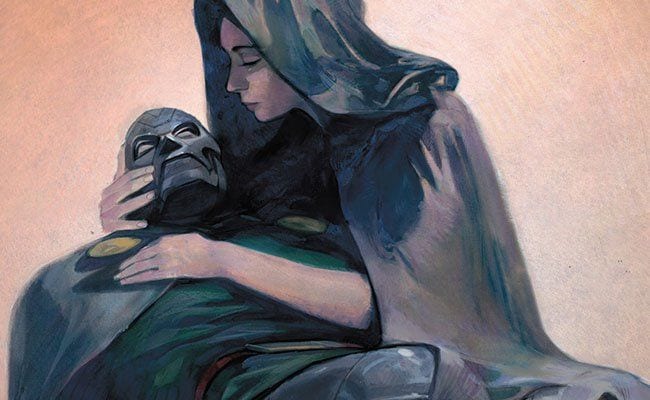 At the same time, however, the outcome is frustratingly predictable. At some point, they’ll do something to absolve themselves. If it’s really bad, it’ll often get retconned via time travel, clones, or several extra orders of tacos.

That predictability isn’t quite so obvious in the narrative surrounding Infamous Iron Man. Brian Michael Bendis and Alex Maleev aren’t sticking to the tried and true formula in making Victor Von Doom the new Iron Man. They’ve set up a story where it’s easy to see Doom going in any direction.

He could use his new outlook to become Earth’s greatest hero, showing up both Tony Stark and the entire Fantastic Four in the process. He could, however, just as easily cross those old lines again, becoming that devious villain who would sucker-punch the Hulk if it made everyone acknowledge his superiority.

It’s not at all clear which direction Dr. Doom will go and that’s why Infamous Iron Man carries so much intrigue. There are still many questions surrounding Dr. Doom’s motivations and his approach to being the new Iron Man, some of which have only been hinted at since Secret Wars. Infamous Iron Man #5 finally attempts to answer some of those questions. Those answers are still incomplete, but the story does make one thing clear. Doom is serious about this new role as Iron Man. He really wants to do something other than subversion, conquest, and megalomania.

It’s clear he’s serious because the narrative to this point is built around a world that still sees Victor Von Doom as the alpha and omega of villains. SHIELD, Ben Grimm, Tony Stark, and pretty much everyone with access to Wikipedia aren’t convinced that he has turned a corner and for good reason. Doom’s record of honesty is right up there with Loki, Thanos, and tobacco lobbyists. It’s perfectly understandable that those tasked with protecting the world are inherently skeptical about Doom’s intentions.

The events and subsequent aftermath in Infamous Iron Man #5 act as major tests of Doom’s resolve. Everyone expects him to revert back to the mustache-twirling villain he’s always been. Maria Hill, Thing, and everyone in between are bracing themselves while, at the same time, provoking him into uncrossing that line. That doesn’t happen, though. Doom, despite being treated like he’s a ticking time bomb in need of preemptive defusing, remains serious about this new heroic path.

This leads him to a confrontation that would be very difficult if he were just plotting another scheme to one-up Reed Richards. Unlike the beginning of this series, it doesn’t involve some C-list villain that nobody minds seeing used as target practice. It’s Dr. Doom’s mother, Cynthia Von Doom.

Her presence alone is revealing. Few who don’t possess the omniscience of the Watcher can understand the importance of Doom’s mother confronting her son. In terms of Victor Von Doom’s motivations, both as a villain and a man, his mother is right up there with showing up Reed Richards. For a good chunk of Doom’s history, one of his primary motivations was saving his mother’s soul from the clutches of Mephisto. It added even more incentive for him to master science, sorcery, and everything in between. If only Peter Parker could be so motivated.

Having succeeded in that primary motivation, meeting his mother here gives the story in Infamous Iron Man #5 a great deal of weight. Naturally, he’s not too keen on believing outright that his mother is alive and just wants a hug. Victor Von Doom may be serious about not being a villain, but that doesn’t mean he’s gullible.

With Thing having already picked a fight on SHIELD’s behalf, it leads to one of the most meaningful clashes to date in Infamous Iron Man. It doesn’t exactly end in a moment ripped from a Hallmark card, but it doesn’t end with Doom wanting to burn the entire planet to a crisp either. If anything, it further affirms Doom’s resolve for this new path as Iron Man. In that sense, it’s a clear victory for him.

That’s not to say there aren’t losers as well. Infamous Iron Man #5 will not go down as one of Ben Grimm’s proudest moments. The same can be said for Maria Hill and the rest of SHIELD. As for Dr. Amara Perera, someone who only crossed paths with Doom because she had the misfortune of dating Tony Stark, she loses the most. To his credit, Doom tries to apologize. However, she makes clear that she still doesn’t see him as a hero. She may not see him as a villain, but he’s no hero.

This is the most relevant theme in Infamous Iron Man #5. Bendis and Maleev are sending Doom down the longer, more arduous road to being what he wants to be. They’re not just tempting him to revert to his old ways. They’re showing him that walking this path is a lot harder and he has an uphill battle, to say the very least. There’s even a teaser at the end hinting that this path is going to keep tempting him into fits maniacal laughter once more. It promises plenty more intrigue for a story that still seems so strange on paper with Victor Von Doom being a hero.

While the themes and content are strong in Infamous Iron Man #5, there are times it still feels lacking in some details. In some respects, the story feels condensed and truncated. It gives the impression that the conversations needed to be longer and that certain characters didn’t get to say what they needed to say. Bendis and Maleev try to do a lot and they succeed for the most part, but some parts of that success still feel incomplete.

This doesn’t make Infamous Iron Man any less engaging as a larger story. It may very well be one of the most engaging stories of the post-Secret Wars world. The story is still in a very nascent stage, but it’s maturing rapidly and in a way that would make any mother proud.