By the time he had landed his first big-budgeted project, Sweden’s Ingmar Bergman had earned his title as one of Europe’s most eminent and definitive filmmakers. He had made a star out of Liv Ullmann, forever cementing her status among cinema’s elite, and he had set a most personal and singular design in storytelling and visual aesthetic. Bergman’s central and fixed themes dealt with the complications and complexities of depression in its many capacities. Some of his most successful features, including Persona, Fanny and Alexander, Autumn Sonata and Cries and Whispers (each of them starring Ullmann) were further developed in theme by the characteristically baroque and sepulchral scope of Sven Nykvist, Bergman’s go-to cinematographer.

After a self-imposed exile from his native Sweden for tax-evasion, Bergman found himself in Germany (after an unsatisfactory spell in France). Liking the air of gloom that seemed pervasive in ’70s Munich, the filmmaker managed to find himself in the company of film producer Dino De Laurentiis, who gave Bergman to date his biggest investment.

The Serpent’s Egg, a thriller as only Bergman could make one, is the result of that union. It bares many of the director’s trademark features – the suffocating auras of despair and an underdog’s sense of triumph over tragedy – but falls short of a more intelligent rendering of human drama. Somewhere in the muddled story of Nazi conspiracies and bruising love affairs, there is the heart of genuine contention that struggles to beat a narrative rhythm of anything that typifies a true Bergman film.

Abel (David Carradine), a former circus performer-turned-vagrant, wanders 1920s Berlin in a drunken haze. Post-war Europe has had him spiraling into despair, and it isn’t until he reunites with Manuela (Liv Ullmann) at a burlesque nightclub that he begins to crawl out of the fug of depression. Abel’s brother has just committed suicide the night before and Manuela, Abel’s sister-in-law, long estranged from her husband, offers her brother-in-law a place to stay.

What follows is a difficult, sometimes passionate love affair that ends up tangled in a network of espionage and underground Nazi experiments. Along the way, Abel and friends are terrorized by German troops, spied on and treated with general distrust. It ends cataclysmically, but somehow, in true Bergman-esque fashion, with a strange, becalming subtlety that quietly levels out all that came before it. 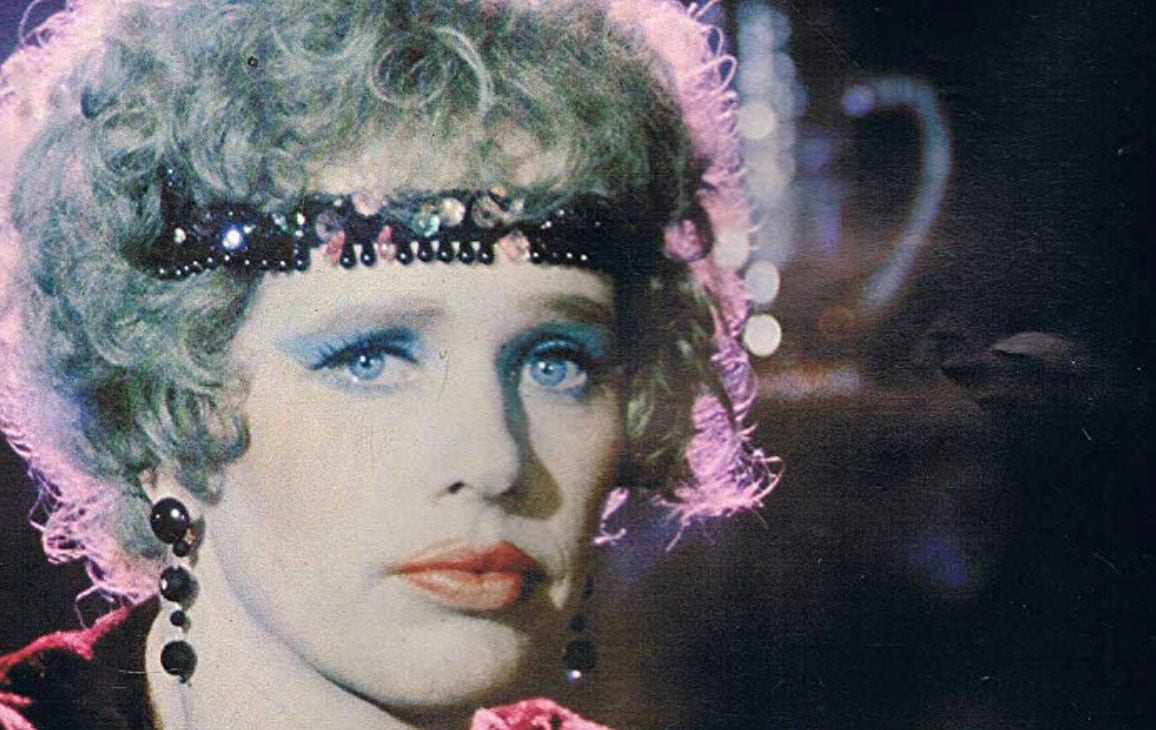 Understated and nightmarishly circuitous, The Serpent’s Egg struggles for a foothold in linear narrative, despite its obvious emotional trajectory. Bergman may hit all the intended notes of sadness and dread, as he is wont to do, but this time the narrative lines aren’t clean. The filmmaker, whose often unfussy storylines have allowed for deeper emotional depths and a clarity in purpose, falters here with the convolutions of plot. Too often, the respective threads of political and human drama become messily entwined, neither narrative strand offering any insight into the other. The Nazi machinations, the political thread of the story, seem to be the film’s governing preoccupation, which saddles the personal conflicts of the film (Abel and Manuela’s love affair) with the doctrinal weight of post-war inequities.

There may have been better coordination amongst the dramatic infrastructures had the casting been more discriminate. Ullmann, Bergman’s faithful muse, is loyal to a fault here. While she executes the dramatic commands with the aplomb that is expected of her, she seems trapped within the confines of an improbable story that diminishes her efforts. An actress given to nuance and tempered delivery, the excessive noise in action and histrionics seems to upend her control at times. Even with this artistic compromise, however, her skills as an actress stunt Carradine’s efforts considerably.

Carradine (whose casting was at the insistence of De Laurentiis) has no sense of emotional detail, his expressions either blank or comically pained, his voice an unaffected monotone. Bergman seems to understand this lack of emotional nuance on Carradine’s end, so he wisely keeps the actor framed amongst the scenes of distracting action, so that Carradine’s lack of skill is never the complete focus. Though Carradine’s performance is certainly problematic, much of that can be owed to the writing of the character. Abel reads like such an unlikable, charmless lout; it’s unclear to the viewer why Ullmann’s character should stay with him, especially during the most inopportune moments.

Bergman’s typically somber and moody work is not suited for action sequences and he struggles to create genuine suspense in scenes of high, physical drama. Chase scenes are strangely stilted and plodding, and the scenes of public riots and chaos are relayed with a disaffected and glacial air. As well, the thriller elements of the film do not interpolate well into the surrounding drama. Many expositional scenes are labored over, building slowly to a crucial plot-point that would otherwise bridge the circumstantial action to the next narrative sequence. A number of times the story falls off the hinges of these plot-points and any momentum that is gained is usually through the extraneous efforts of the actors involved; Ullmann, in particular, who has to pull out all stops to work a necessary friction and gain the needed traction.

That said, there are many notable accents to be found in The Serpent’s Egg. Being that this was Bergman’s largest budget on a film, an admirable amount of time and capital has been spent on the production design and art direction. Sets are lavished in the appropriate Art Deco/Jazz Age décor. Depending on location and establishment, colours are either suitably muted or garishly baroque. In many ways, the art direction shines with an authenticity that a number of the players in the film are lacking. On such an expansively designed shoot, Bergman sensibly retains his most trusted cinematographer Nykvist to give the drama on scene a balanced and textured spectrum. 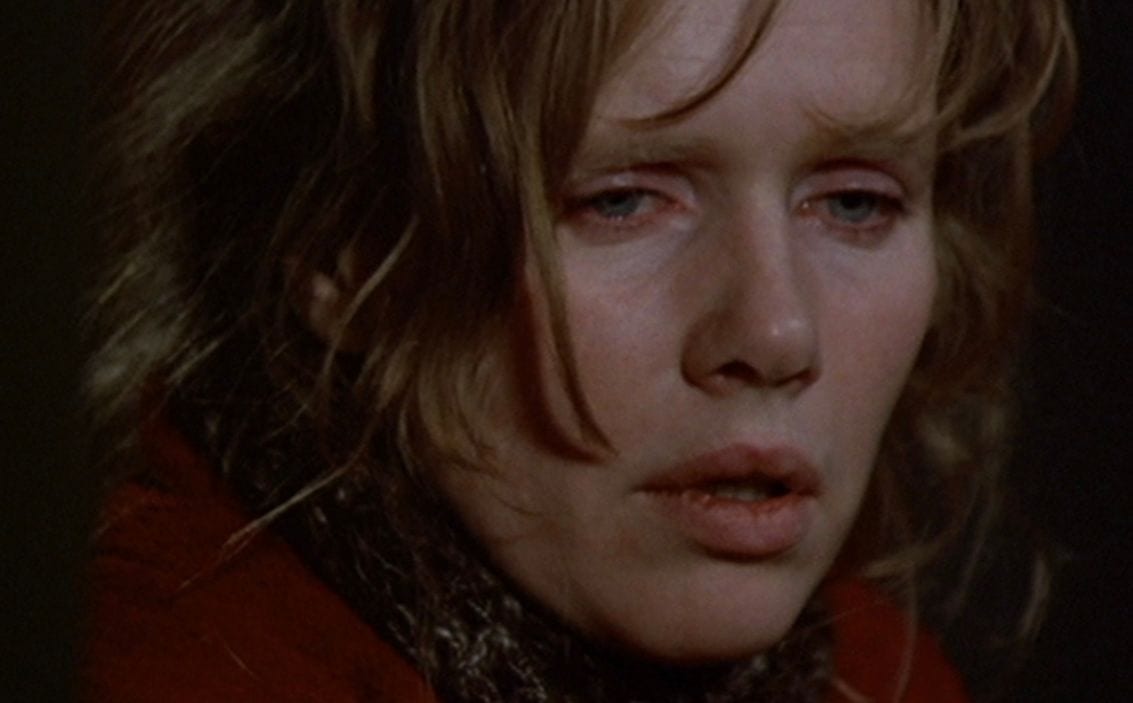 It must go without saying that Arrow Academy Films’ Blu-Ray release of The Serpent’s Egg is a masterful packaging. A beautifully crisp restoration of the print breathes new life into the picture, where the sullen greys and browns are earthier and the Art Deco colours vibrant and richer. There’s more definition here, which means a less muddy print and clean, visible outlines. While not a film of considerable noise (save for the burlesque numbers and some vocal dramaturgy here and there), the audio is consistently clear throughout.

There are plenty of supplements as well, which will give many some gristle to chew on. Included in the release is an audio commentary with actor Carradine (who passed away in 2009). He gives a reading on the film, which reveals a sincere appreciation for Bergman’s work as well as the opportunity he was afforded to participate in the project.

In addition, three features on the film, including “Bergman’s Egg”, “German Expressionism”, and “Away From Home” round out the supplements to give the release some serious (and much appreciated) heft. If first pressings are still available, they will include an illustrated liner booklet with an essay written by Geoffrey Macnab. As per usual with Arrow Academy releases, the Blu-Ray comes with a reversible artwork cover, with both newly commissioned artwork and the original. Optional English subtitles are included, as well.

Bergman dedicated his entire craft to augmenting the restlessly internal emotions that lie deep within, waiting to be aroused from their dormancies. Experience the slow seep of anxiety that fills the rustic spaces in Autumn Sonata like the swell of music, or the bitter chill of envy that softly permeates the leaden warmth in Cries and Whispers, and you begin to see the power and scope he commands in the most restricted of spaces.

Indeed, Bergman was a master of circumvention and the emotional micro-drama, magnifying the smallest disturbances to a size that could be seen and studied through his limpidly cold and observant eye. In The Serpent’s Egg, he works beyond his means, surveying too much but saying too little about the nature of his characters. The Serpent’s Egg is, alas, a misstep in Bergman’s canon of work. But despite the strained and misplaced effort, it is still a noble one. Try this film, if only to understand and appreciate the great heights from which a great filmmaker can sometimes fall.