It’s already been noted that Zagreb’s INmusic festival just keeps growing. Already in its 13th year, once a tiny outing for rock worshippers of Eastern Europe, this year it is all but certain the festival will pull in a crowd of almost 100,000, with 95% of some 10,000 campers visiting from abroad. No surprise, considering its fast-growing reputation as one of Europe’s most prominent rock festivals, and one of the rare truly rock-oriented events east of Germany. After last year’s massive success with Arcade Fire, Kings of Leon and Kasabian as headliners, this year kicks off intensely, too. 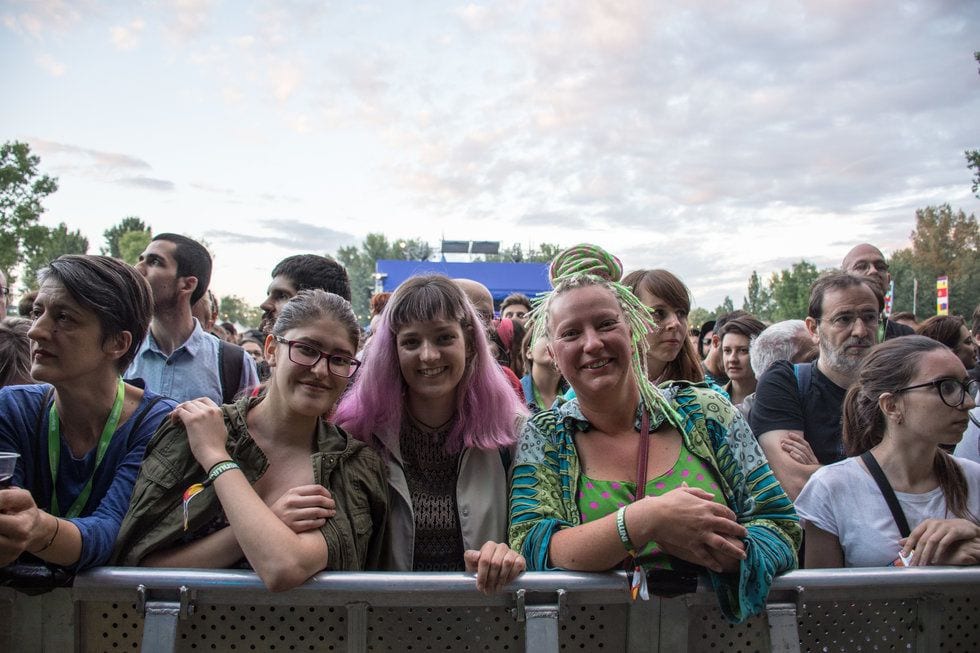 While it’s no secret that INmusic chiefs spend the majority of their budget on powerful headliners who will attract the masses, the festival also places an emphasis on cult acts, emerging talent and regional bands, meaning the program lasts for over 10 hours each day. The sun is yet to set over Jarun, the magnificently sheltered lake merely miles away from the center of the city; there is a rowing practice as thousands of visitors flock to the Isle of Youth from all over the continent. All prominent acts perform either on the Main Stage or on the nearby World Stage, with performances seldom running concurrently, so that one can wander between the two structures for non-stop entertainment.

Unfortunately, Frank Carter and the Rattlesnakes’ bus crashed en route to Croatia (thankfully, nobody was injured), so the band was replaced by English newcomers, False Heads. The trio is a new name on the punk-rock scene, with a single EP, Gutter Press, to their name; it was reasonable to expect some stage fright, but their frontman, Luke Griffiths, doesn’t scare easily. Physically reminiscent of the young version of two Kurts, Cobain and Russell (you read that right), he is loud and entertaining, his bleach blonde mop swirling in all directions during an intense 60-minute set. Interestingly enough, False Heads performed side by side with both Frank Turner and Queens of the Stone age last year at the “A Peaceful Noise” event in London, which celebrated the life of Nick Alexander, the Eagles of Death Metal associate killed during the Bataclan terrorist attack in 2015. Several hundred people present ensured the raw performance was well-received, though it was still early for most visitors.

Témé Tan, the up-and-coming world music producer and multi-instrumentalist, also wows the small crowd present at the World Stage around sunset, but it wasn’t until David Byrne‘s dozen magicians took to the Main Stage at 8.45 PM that the big numbers started to gather. Now, there’s very little that can be said about the 66-year-old NYC art maverick that music lovers don’t already know, but even after all the fame of the Talking Heads, even after all the quirky, excessive behaviors we’ve witnessed for decades, in flesh or via the Internet, this man, this incomparable chatty head, is still full of surprises, scathing social satire – and true avant-garde reinvention. Just minutes before the band will step on the scene, there is nothing on stage, save for a vast drape of chains, arranged so as to look like little more than a stylish cage. No cables, no instruments. Then, a smiling Byrne in a simple grey suit sits on the center, holding a life-size human brain replica. 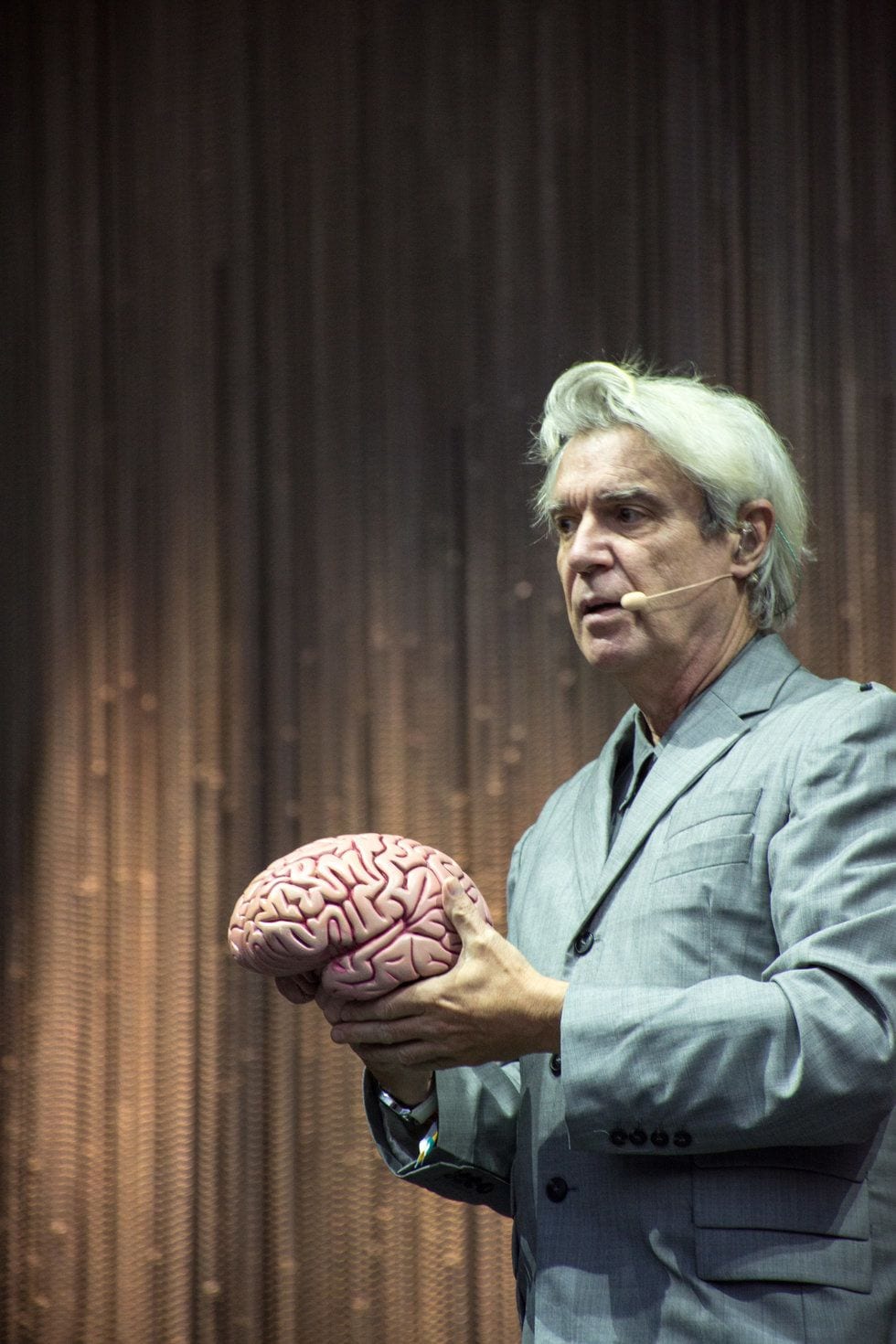 Of course, the show begins with “Here”, a song off his newest album, American Utopia, with lyrics describing the parts of human brain and the way they function. As usual, this time Byrne is also all-in; he quietly stands up and starts walking, pointing to different areas of the brain as he examines their purpose, or lack thereof. He is solemn but one can tell he’s having so much fun with his outlandish concepts. The real fun, though, begins when his band of 11, all dressed in the same simple grey suit, jump beside him carrying a multitude of completely wireless instruments, for a hilarious rendition of “Lazy”, Byrne’s legendary collaboration with the English house duo X-Press 2. As kinetic as a gymnast on steroids and as animated as the best of stand-up comedians, on stage Byrne is truly at home in the way seldom seen, even among the greats. His band is wireless for a reason – they spend virtually all the time live dancing, interacting and following sometimes fairly complex choreographies. It is evident that the lack of scenography is intentional – you don’t want to be distracted from the interplay of the participants for one second.

However, the true marvel comes from Byrne himself and his sublime singing capabilities. Live he sounds nothing like the nasal, perpetually bored performer with just a pinch of anxiety and snide cynicism; on the contrary, his vocals are sharp and clear, with a solid range. A couple of Talking Heads favorites, “I Zimbra” and “Slippery People” get the 20,000-strong crowd going. As it’s often the case with festival featuring a large number of evergreen performers, the average age of the attendees is well above 30. Plenty of grey hairs bobble with the rhythm, which is no surprise – Byrne hasn’t performed in Croatia in over 20 years.

One after another, new tunes and old favorites mix, many of the songs with new melodic arrangements, tribal and more raw than before. Indeed, Byrne’s band is a delight to watch – men in makeup, women on guitars, people of varied ages, all dancing, convulsing, doing pantomime and shouting back at one of the rare living legends of contemporary art (art in general, not just music). “Once in a Lifetime” is again helped by Byrne’s playful yet longing vocals; he shouts as well as sings, it’s so easy and natural to him to entertain the spectators. 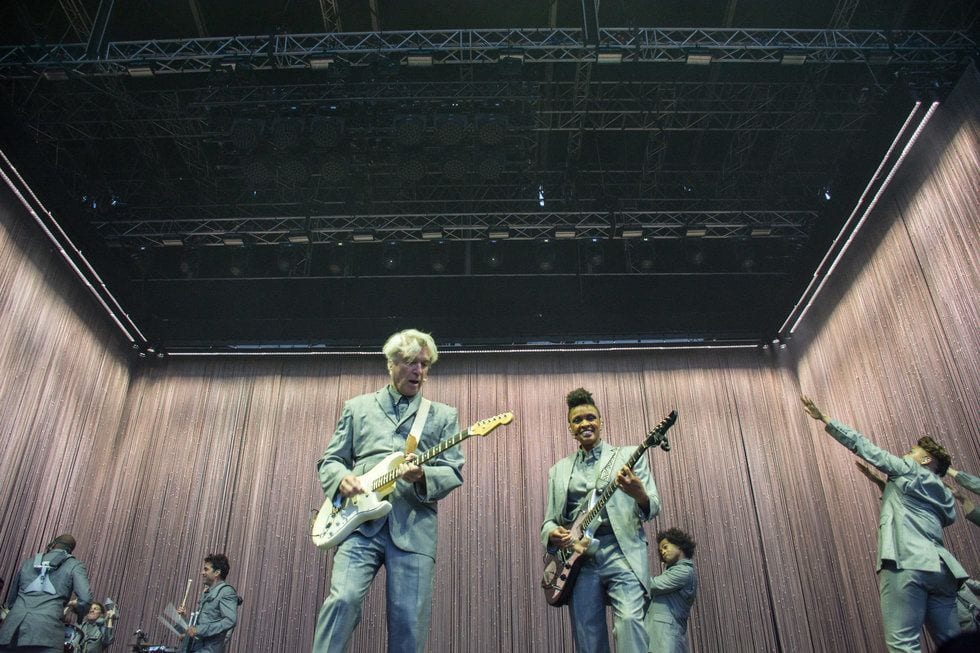 Toward the end, “Blind” and “The Great Curve” are a real treat for the older fans, while “Burning Down the House” brings an appropriately bombastic and poppy closure. “I’m an ordinary guy, burning down the house,” smiles Byrne as he delivers his trademark bizzaro lyrics. Indeed, this man is as far from the ordinary as David Bowie was, there is no more adequate comparison to make. Both his songwriting skills and his performance ideas are still fresh, still genius, and still resonating with anyone who witnesses them. Not often will you see a performer who’s been around for 40 years amuse and thrill a teenager who’s barely heard of them, but Byrne succeeds, and how. At the very end, the band performs “Hell You Talmbout”, a song about police cruelty toward black people written by Janelle Monáe. “Maybe you won’t recognize some of the names of the people in this song, but you can Google it and find what it’s about,” says Byrne before he bids farewell.

Just around the corner (well, more like a set of barbeque stands and some trees), Alison Mosshart and Jamie Hince attract a capacity crowd of about a couple of thousand for a 75-minute fever. It’s never certain how many the Kills fans are present at the cult band’s festival shows, but it’s safe to presume that most bystanders go home converted. Both Mosshart and Hince are on top rocking form, with plenty of the Kills’ better-known tunes putting the crowd in something akin to a trance, though it must be noted that the modest World Stage doesn’t do them justice. The highlight of the show is the cover of Saul Williams’ “List of Demands”, which sees Mosshart at her wildest, screaming be(a)st. 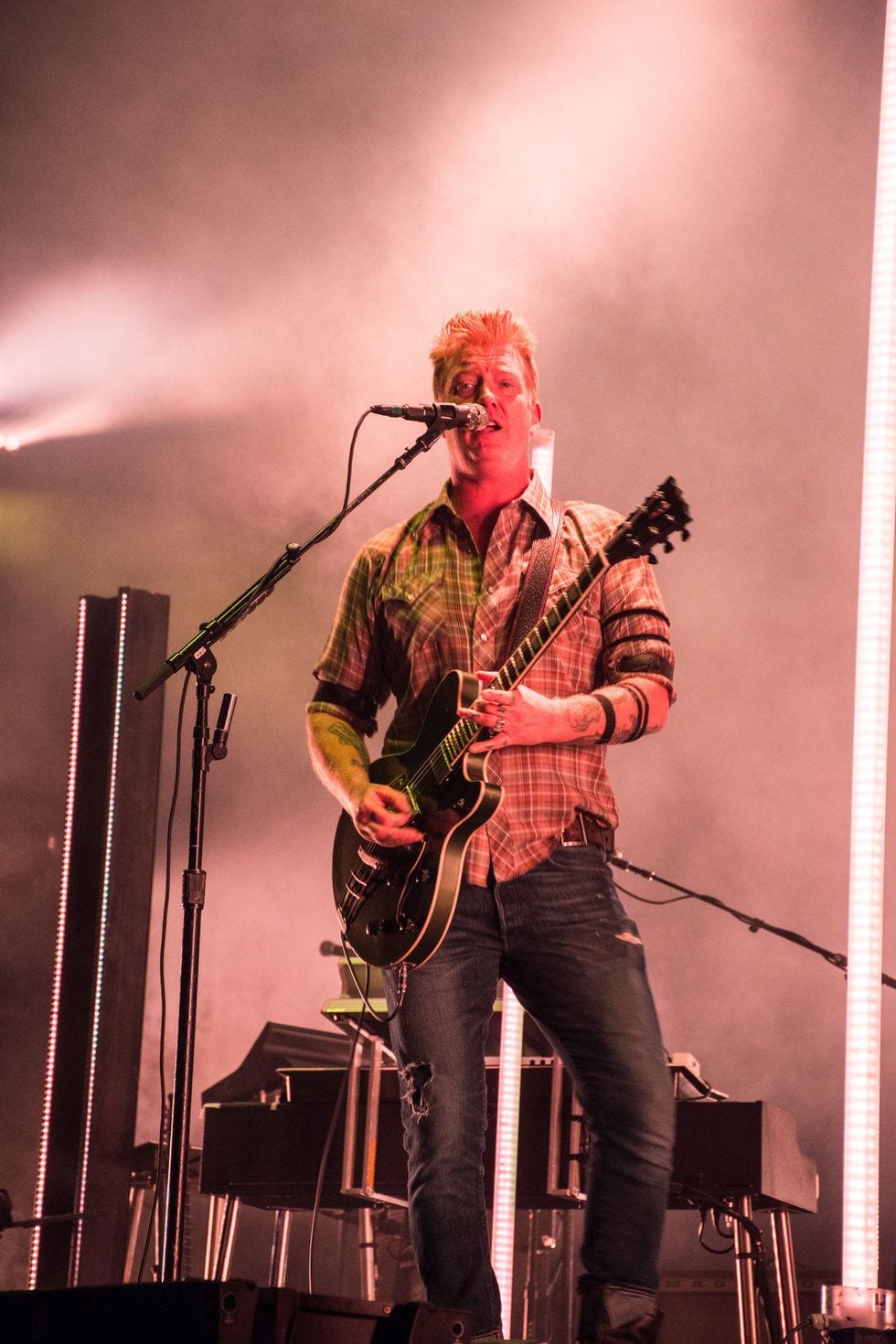 Speaking of wild beasts, Joshua, as he refers to himself, Homme, languidly emerges on the Main Stage with a cigarette in his mouth shortly before midnight. Standing at well over six feet and 200 pounds, in a lumberjack outfit and constantly sporting a sly smile, he’s only nominally a sinister presence; in reality, his bunch of monsters of rock are a swagalicious, almost cute bunch, yearning for some lewd rapport with their fans. Queens of the Stone Age instantly draw close to 30,000 people to the main stage and kick off with “If I Had a Tail”. Casual listeners may be taken aback with lyrics such as “gitchy gitchy, ooh la la” but that’s exactly the elusive charm of the desert bunch – they want the crowds to dance seductively and they make it known. At one point, Homme even chats with a couple in the audience, telling them he wants to “make it” with both of them. As voracious as his music.

Of course, the bravado is there as well; one flirtatious tune is always followed by two thunderous songs. “Monsters in the Parasol” and “My God Is the Sun” make the island ground tremble, the front row crowds head-bang enthusiastically. The rest of the set draws heavily from the band’s newest release, Villains, which in theory isn’t supposed to be an issue, except that it seems like most of the crowd in the back is unfamiliar with the album, hence refusing to play along, chatting uninterestedly during the middle part of the performance.

After an hour of songs predominantly from the past five years or so, “Make It Wit Chu”, “Little Sister”, and especially the epic tearjerker “Go With the Flow” and “A Song for the Dead” (a great showcase for Jon Theodore’s drumming skills) prove worthy closers to a roaring concert. It’s 1:00 AM and the dust settles; plenty of festival-goers go back to food and drinks stands for another round but most head straight back along the lake – after all, the second day will bring Nick Cave, and a maelstrom of physical and emotional chaos with him. One should be prepared.