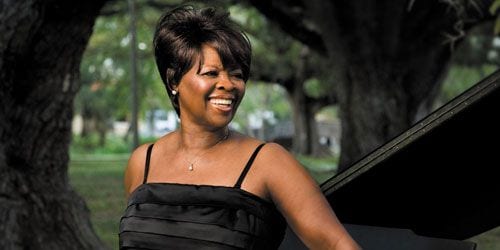 Like fellow soul pioneer Solomon Burke, Irma Thomas is one of the most revered and humble musicians in the music business. She’s an iconic figure with a voice capable of transforming any simple melody into an impassioned moment, and whose interest in assorted sounds makes her a sought-after collaborator. While the adage may be true that soul singers age like fine wine, there is undoubtedly a need for the right choice of melodies. After all, there’s only so much that one voice can salvage. Simply Grand places Thomas’ rich, seasoned vocals alongside a handful of distinguished pianists and songwriters. Together, they dabble in jazz, R&B, and even a little bit of pseudo-African folk.

The most remarkable thing about this album is hearing how little Thomas has lost of her soulful touch. At 67, she still sounds like she’s belting it out at the Pimlico Club with Tommy Ridgley. On “Somebody Told You”, a track Thomas performed back in her Minit label years, John Medeski prepares the song an octave lower but the songstress opts for the higher original note, reaching it effortlessly. It makes for an unexpectedly exciting moment. But it’s only one of the many manifestations of her flexible voice.

Longtime collaborator Dr. John contributes two tracks to Simply Grand. John and Thomas have a distinct chemistry dating back to Irma’s first song “You Can Have My Husband (But Please Don’t Mess With My Man)” which featured John on guitar. “Be You” was a song originally intended for Etta James but ultimately fell in Thomas’ lap. The song structure is simple and effective. Irma describes how she will beckon to any of her man’s calls even saying she’ll transform into granulated sugar.

Other contributions come from more unlikely sources. The opening track “River is Waiting” is taken from John Fogerty. With Henry Butler on piano and a trio of backup vocalists, the song builds into a rising chorus that draws a pulse and rhythm from Graceland-era Paul Simon. There are also selections that feature the likes of Norah Jones, Marcia Ball, and even Randy Newman.

“This Bitter Earth” is hopefully a preview of Irma Thomas’ next musical venture. Tender, jazzy and full of hi-hat shimmers and delicate piano handwork, the song is a shining example of her control and subtle manipulation. Thomas digs into the very core of the track’s message while Ellis Marsalis and the rest of the band provide some masterful improvisation. Nowhere else on this album does Thomas’ vocal maturation sound so good and textured — her deep pitch matching the smoky nightclub aesthetic constructed by the instrumentation.

However, not all of the compositions here strike gold. “Overrated”, a new-feel R&B track that features New Orleans pianist Davell Crawford sounds too slick to extract any real emotion. It isn’t the kind of love conundrum single that soulsters are used to hearing from Irma Thomas, at least not the younger Irma Thomas. There’s no sass and the lyrics feel weightless. Perhaps Rounder Records producer Scott Billington and Thomas herself were looking to connect with a younger generation of soul fans and songwriters with this number, but it seems like a misstep compared to the playful, semi-retro vibe that Simply Grand exudes.

While After the Rain proved to be exceedingly resonant following Hurricane Katrina (even though most of the album’s selections were made prior to when the storm struck), Simply Grand shows that Thomas has pondered over and digested the catastrophic changes that mark her hometown. On this album, water is more often associated with renewal and perseverance, and Thomas’ voice carries a strikingly optimistic tone. Songs like “River Is Waiting” and “Underground Stream” find Thomas at peace with what has otherwise been a destructive force in her life. Maybe she has learned to cope with the damage of the past couple of years, but what’s even more remarkable is how well she has managed to hold on to her voice through it all.