More a curio or relic than an outright classic of the ’70s, Eyes of Laura Mars (1978) sits oddly amongst the other efforts of that decade as film of two halves. Described as a romantic thriller that has difficulties bridging the two genres, Eyes of Laura Mars is nevertheless intriguing for its cumbersome attempts to make a fusion of gritty drama and a kind of narrative belonging to an afternoon soap opera.

The film, in its conceptual stages, was the subject of many arduous negotiations and re-writes. John Carpenter, who put the slasher on the map with his untouchable, iconic Halloween (1978), is the principal writer here. Many of his trademark elements are in place: a hidden figure watching from the shadows, a young, strong-willed woman who becomes a target for danger and violence, and an atmosphere so thick you can cut it with a knife. But those elements are heavily compromised by the revisions made by screenwriter David Zelag Goodman, who came on board for the project when studios were not happy with the initial treatment delivered by Carpenter.

The story involves New York fashion magnate Laura Mars (played by a strained Faye Dunaway), whose racy, highly controversial photoshoots of fashion models have made her a star and also the scapegoat for some unfavorable criticism. Mars likes to depict her shoots the way she sees life on the streets of New York: a cesspool of violence, drugs and sex. Her particular way with making the unsavory seem sexy and elegant has made her the toast of the town and now every mogul in the city wants to broker deals with her.

Mars, despite the waves of adulation and attention, has a peculiar distraction that’s putting her on edge. She suffers from frightening spells of clairvoyance that reveal the murders of her friends in the fashion industry. Mars dismisses the visions as the symptoms of stress and the overwhelming success that she never really seems prepared for. But the murders eerily echo the disturbing photos she has taken, sometimes years before. 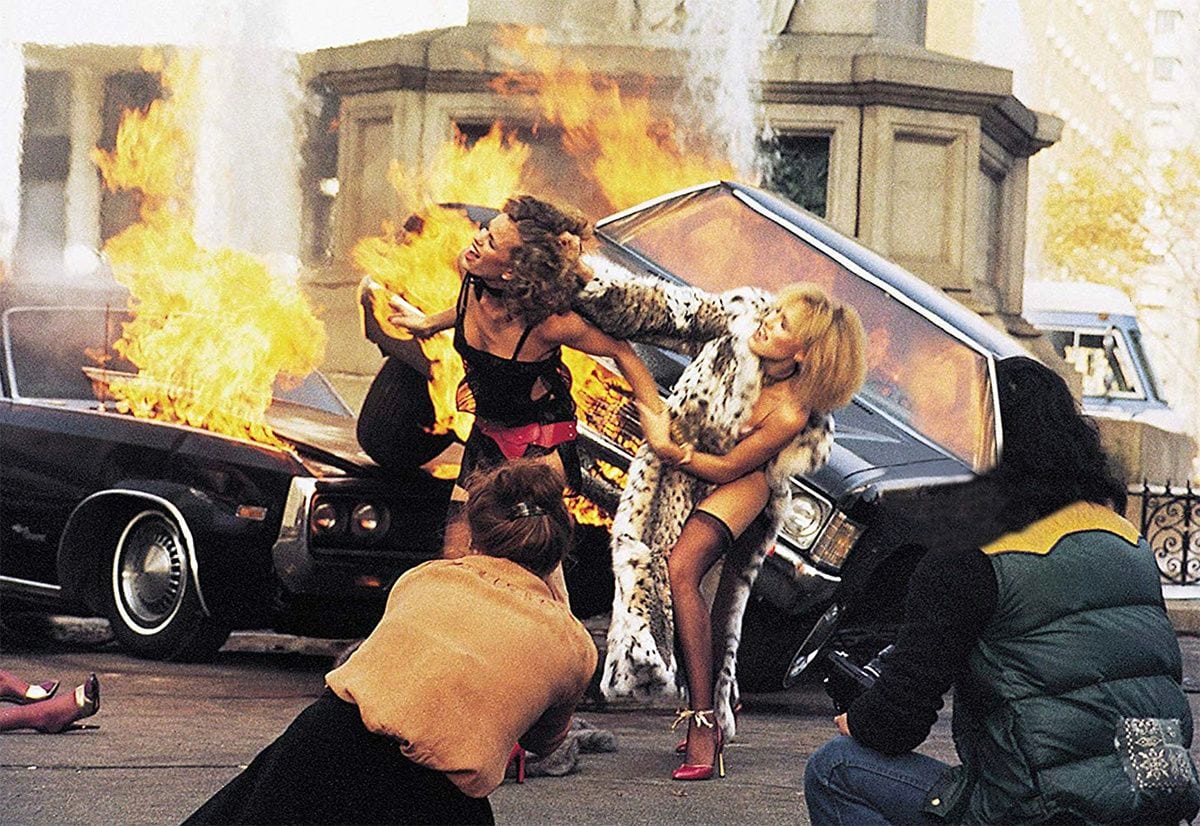 Is someone taking their cues from her sensationalized photos? Or is there a supernatural force at work? Is Mars tapping into the mind of a killer, and then unconsciously depicting the murders on celluloid? Enter police detective John Neville (Tommy Lee Jones in one of his earliest leading roles), who is skeptical but concerned. Neville endeavors to protect the frazzled Mars. But his presence cannot stop the murders around her, which, for Mars, seem to be a distressing matter of six degrees of separation…

There are a lot of really nice elements in Eyes of Laura Mars, which elevate it above the standard paint-by-numbers thriller. For one thing, the film benefits from the at turns glamourous and grimy Manhattan scenery. Because this is a film of the ’70s, Manhattan here is not the manicured metropolis of today, affixed with a Starbucks on every block. It’s the grinding, hustling death-trap of workers and fashionistas, careening school kids, and the homeless, all vying for precious space on the crowded sidewalks. It’s dirty and thrilling, haunted by a sense of hungry competition that its leading character knows all too well.

On the streets, Mars no longer maintains a cool and contained composure; she hurries home to her apartment, making sure not to catch anyone’s leering eye. The film manages to work up the sweat of dread, simply through the use of the decrepit, on-site locations and, wisely, director Irvin Kershner allocates the more startling sequences to the deadly hustle and bustle of the streets. The clamor and restlessness of the city lends heavily to the mood and tone of the film.

By there are issues with the structure of the narrative, namely the ways in which the action in the film precipitates the interactions of the people on screen. Eyes of Laura Mars is a classic example of characters doing dumb things at the most inconvenient moments. Many scenes seem to be written so that an actor will be forced into histrionics, a kind of poking-at-the-animal-in-the-cage set-up to see how he or she will react. It means that a normally assured actor like Jones or Dunaway (admittedly given to such ham-fisted, scene-chewing performances in schlock like Mommie Dearest) must do away with the better judgment in nuance in order to serve a reaching plot. In these particular engagements, the action and drama get muddled and the pacing wanes. 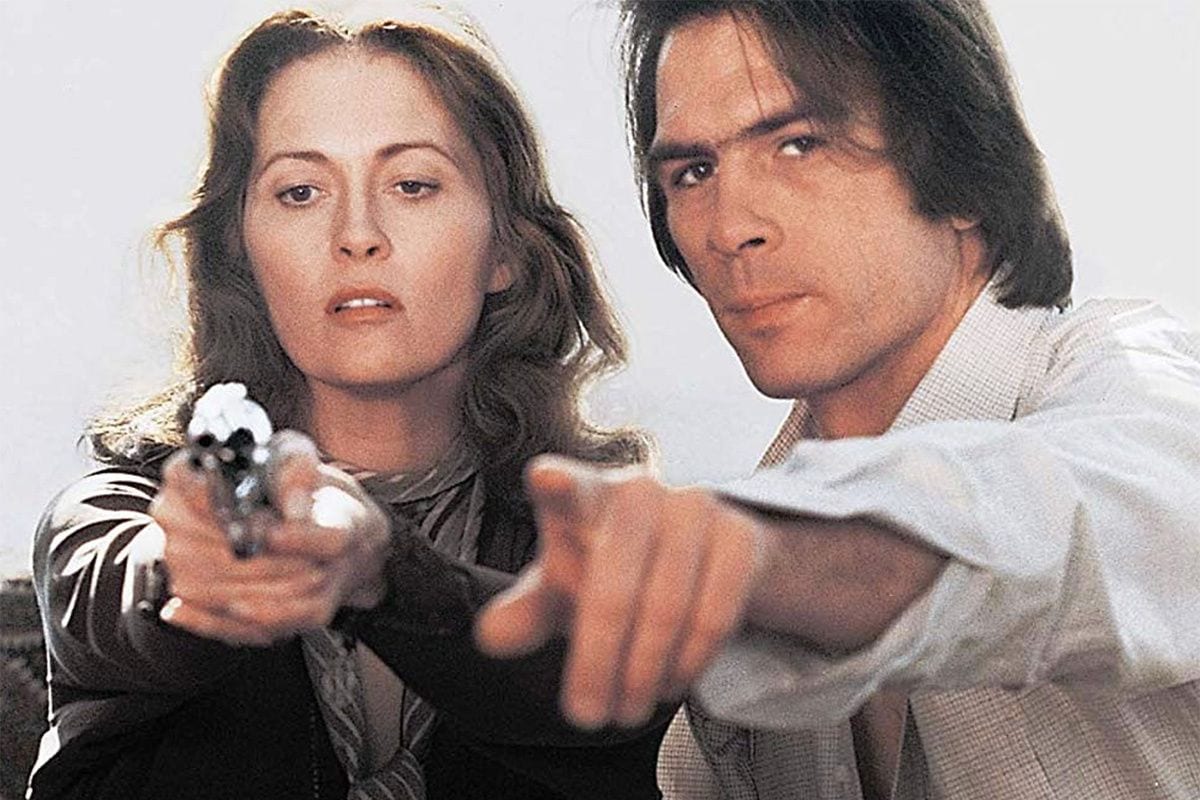 The script doesn’t supply red-herrings (a much-weathered trope of murder-mysteries, but still effective in generating suspense), making it fairly easy to guess the culprit halfway through. Kershner does, however, employ some nice stylistic touches throughout to boost the film’s aesthetic designs. Apartment life for the cast means dark and glossy surfaces that reflect the coveted luxuries of Italian Vogue living. That it is hopelessly (and charmingly) dated with the gold-brassed linings of ’70s era excess adds to the Formica and carpeted nostalgia.

Scenes of apartment life also contrast nicely with the cold, grey concrete of the outside world, giving us a sort of lacquered-coated sense of comfort once we are away from the treacheries of the dark streets and alleyways. As well, an inspired casting choice in Rene Auberjonois as Mars’ publicist/manager lends an accent of camp to the proceedings. Auberjonois manages to one-up the normally scene-stealing Dunaway with some prickly one-liners and a typically hard-nosed New York sense of humour.

Despite the datedness of Eyes of Laura Mars, it has survived the decades on its cultish appeal. The real pleasures of the film are, in fact, the location scenery of a long-gone Manhattan, and Mill Creek’s Blu-Ray release does a wonderful job of restoring the colours and tones of the print to their original gritty glamour. Sound — quite a big deal in this film, as much of the action takes place amongst the din of the city streets — is rendered very nicely here.

Eyes of Laura Mars is a film that cannot withhold the weight of it many tangled narrative snags. But as a document of both a then-new experiment in genre and unsavory ’70s New York, it’s a much worthy time-capsule. Eyes of Laura Mars would be given a loose and unofficial remake 12 years after its initial release with Fear (1990), a film starring Ally Sheedy that wasn’t without its own faults.