Izzy Gets the F*ck Across Town
Christian Papierniak
Shout! Studios

They say characters need motivation. For Izzy (Mackenzie Davis), the frazzled comet-streak center of Christian Papierniak indie variety show Izzy Gets the F*ck Across Town, it’s pretty basic: “I’ve got to get somewhere and fuck shit up.” In her journey, shit gets in the way. It’s kind of like Walter Hill’s crime thriller The Warriors (1979), only instead of gutter-trash New York she’s tripping through gentrified Los Angeles, and instead of battling chain- and bat-wielding teenage gangs, she’s catching rides with whackadoos, stealing bikes, and arguing with her sister. This is all so that Izzy can bust up an engagement party. The stakes are not high.

By the time Paperniak starts Izzy on her one-day Odyssey, she’s already about to hit rock bottom after scrabbling for a place in hipster Los Angeles. After Izzy’s sister broke up their duo a couple years back and her best friend hooked up with her ex-boyfriend, Izzy hasn’t gotten off the couch of manic self-pity. “I played South by Southwest!” Izzy shouts. “Two years ago!” shoots back the terminally irritated husband of her couching-host friend Casey (Meghan Lennox).

Since that brief burst of maybe-fame—her songs are still “all over Spotify!” Izzy claims—the would-be songstress has been living the gig economy dream at particularly low wattage. The movie starts with her waking up in the bed of a one-night stand (Lakeith Stanfield) she met while catering. Her future employment with said agency appears dubious, given the unexplained bloodstains on her white catering jacket. After hitting a random occurrence trifecta that she stubbornly spins into proof that the universe is sending her a sign, not to mention freaking out over an Instagram post, Izzy decides she has one thing to do on this sunny Southern California day: Find the engagement party being thrown by her ex, Roger (Alex Russell), and her ex-best friend, Whitney (Sarah Goldberg), and stage a scene that not only ruins the wedding but brings Roger back to her.

The first three-fourths of the movie is taken up with the impediments faced by a broke and permanently pissed-off musician whose limited social skills include aggressive intimacy and thievery. Paperniak, who also wrote the screenplay, uses this as a reason to essentially throw awkwardly goofy cameos at Izzy and watch her reaction. Sometimes these don’t work even though they should, as with Alia Shawkat’s motor-mouthed drunk or Annie Potts’ sweet and helpful agoraphobic painter.

When a scene particularly clicks, it almost makes less sense. When Carrie Coon rears into frame as Izzy’s sister, Virginia, and the two lock into a blistering argument about who abandoned who, the chill crisp of her intensity—not to mention her showstopper acoustic duet of Heavens to Betsy’s “Axeman” with Davis—makes you wonder if she was meant to be in a far more purposeful movie. 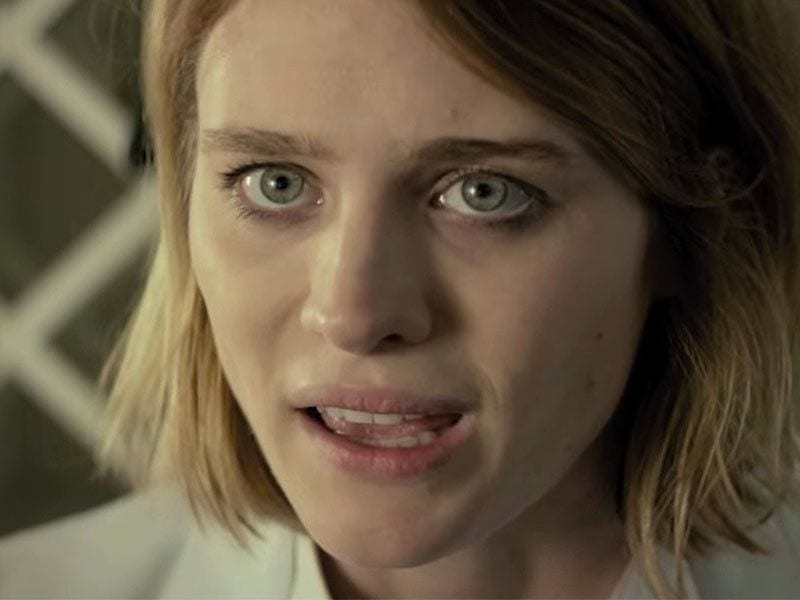 Izzy Gets the F*ck Across Town works hard to bring an edge to its shallow story. Izzy swears like a sailor and smokes, neither of which habits are quite as shocking as the movie seems to think. It’s broken into chapters (with titles like “Where’s My Fucking Car Dick?”) that show how many hours Izzy has left. But since her quest is so obviously foolhardy, it doesn’t raise the tension level.

The screenplay tosses out the occasional decently witty line. But more often the atmosphere of lo-fi SoCal weird never meshes with Paperniak’s overwritten and Diablo Cody-esque attitude. The wide-open nature of the ending, at first disappointingly unbelievable and then just inexplicable, feels less like a conclusion to this jumbled movie than the start of a far better one.