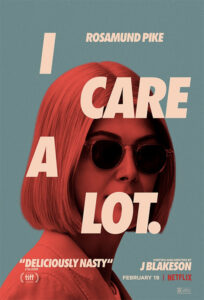 “There’s two types of people in this world: the people who take and those getting took; predators and prey; lions and lambs. My name is Marla Grayson and I’m not a lamb. I am a fucking lioness”. So begins J Blakeson’s darkly comedic film I Care a Lot, currently streaming on Netflix.

Despite boasting a terrific cast, with particularly engaging work from Rosamund Pike and Dianne Wiest, and a horribly fascinating premise, I Care a Lot nonetheless left many critics and viewers feeling unfulfilled by the time they reached its shocking final moments. No amount of Rosamund Pike’s charisma prevented the general feeling of ambivalence towards most of the plot. So, why did Marla Grayson’s (Rosamund Pike) character arc become such a confusing and frustrating watch?

Many defenders of the film have been quick to point out sexist double standards regarding male and female anti-heroes’ reception. Where audiences are more willing to sympathise with a male antihero, they will often jump at the opportunity to castigate female protagonists. While this is certainly true, arguably, there is something deeper at work in I Care a Lot. Clearly, the task of writing anti-heroes and ethically-questionable protagonists is a difficult one, dense with complications and differing from genre to genre. Thus, in exploring these dynamics, it’s worth comparing the confused portrayal of Marla Grayson to a selection of other successfully drawn antiheroes from a variety of genres.

First, we must look at a common defence of I Care a Lot: that its portrayal of awful individuals is similar to comedy shows like Howerton and McElhenney’s television series, It’s Always Sunny in Philadelphia (2005-) or Iannuci’s Veep (2012) and thus, should be subject to the same treatment. Only, this argument fails to acknowledge what makes those characters work so well. Not once in either of these long-running, critically-acclaimed comedies has the writing attempted to make the characters “cool” or defensible. One might assume that a show like It’s Always Sunny in Philadelphia would have aged terribly in recent years, but this ignores the writers’ principled approach. As Glenn Howerton, the co-writer and star of the show, said in a recent interview, “people know who we are, and they know that our intentions are actually to skewer this sort of behaviour, not to celebrate it.”

Indeed the characters in It’s Always Sunny in Philadelphia are not once praised or rewarded for their misogyny or sadism. Instead, their deviancy is humerous precisely because it’s so ridiculous, and even pitiful, to any modern audience. Indeed, in Veep and It’s Always Sunny in Philadelphia, much of the comedy springs from the increasingly absurd scope of the characters’ amorality. We are laughing at them, not with them, and we are certainly not cheering them on.

On the rare occasion that these shows have attempted to portray their characters sympathetically, it has only been in moments of genuine sincerity and humanity. Often, as with Mac’s (Rob McElhenney) famous coming-out episode in It’s Always Sunny in Philadelphia (season 12, episode 6), the sincerity is heightened by the cynical context that surrounds it. This is where I Care a Lot gets confused. Where in the other shows, the deviancy is funny because there is no support inferred by the writing, in I Care a Lot, Marla’s actions are often uncomfortable to watch because they are surrounded by affirmations — both stylistic and in dialogue — that what she is doing is ‘cool’ or even ‘badass’. We are subliminally asked to root for her in what is framed as a quasi-feminist quest for domination.

Here, simply look to Marla’s opening statement or her confrontation with the son of one of her victims. This feminist narrative is undermined, however, by the simple fact that Marla’s targets are not predatory men, as in Fennell’s recent film, Promising Young Woman (2020), or patriarchy as a whole, but are instead vulnerable elderly people, many of whom are women. These are hardly deserving victims.

Here we arrive at another genre dynamic. Can I Care a Lot work within the crime-drama dynamic alongside films and series like Scafaria’s Hustlers (2019) or Gilligan’s Breaking Bad? The comparison with Hustlers is particularly apt due to that film’s feminist and anti-Wall Street politics. Hustlers and Breaking Bad are both stories that begin by portraying our antiheroes as victims of a broken system. Despite his many qualifications and accomplishments, Breaking Bad’s Walter White (Bryan Cranston) seeks financial security for his family through cooking meth after a terminal cancer diagnosis. Likewise, Hustler’s Destiny (Constance Wu), a single mother who is devastated by the 2008 financial crisis, finds success in essentially drugging and then stealing from Wall Street CEOs and stock traders, the beneficiaries of the crisis.

Thus, before questions of morality are raised, we have established our players as sympathetic, relatable, and victimised by a system rigged against regular working people. Crucially, by seeing them at their worst, we see the root of their motivations later in the narratives. Though the two stories are different in how they deal with the complexities of the characters’ actions — Breaking Bad asks us to openly question the ethics of Walter’s decisions whereas Hustlers is more unambiguously supportive of the dancers — in both, we have a basis of great character writing. Indeed, Hustlers gets away with its stylish portrayal of the women’s crimes, partly because of this strong foundation.

Thus, films like Hustlers work because they do two vital things. Firstly, they create complex, sympathetic characters who are brutalised or victimised by a broken system. Secondly, they assure us that the target of the antihero is someone or something that relates in some way to their previous suffering. This means that any ethically questionable actions by the protagonist are at least understandable, and perhaps even defensible.

I Care a Lot does neither of these things. Marla tells us that she’s been poor, but we don’t have any understanding of her experience. She then achieves her goals not by attacking the system or even attacking the individuals who meant her harm, but by manipulating a broken system to her benefit. This is the equivalent of making the plot of Hustlers about how Destiny and her colleagues decide to become fraudulent hedge fund managers. It would certainly not lend itself to the ‘cool’ stylistic tone that the film uses. In short, Marla’s motivation throughout the film is not to exact revenge on those who exploited her, but instead to become the exploiter.

Obviously, this is not to say that films about those who seek to dominate unjust systems are inherently flawed. Many excellent character studies have done this and have been subsequently hailed as masterpieces. Take, for example, David Fincher’s 2014 film, Gone Girl, coincidentally also starring Rosamund Pike. One could perhaps claim that I Care a Lot fits within this narrative. However, even as a portrayal of villainy, the film is confused.

Within any good study of villainy is a deep exploration of the psyche of our protagonist. Robert De Niro’s Travis Bickle of Taxi Driver (Scosese, 1976), Daniel Plainview (Daniel Day-Lewis) of There Will Be Blood (Thomas-Anderson, 2007), and Amy Dunne of Gone Girl all share this feature. If the film fails to provide an interesting basis for this villainy, it will falter, leaving the viewer with little to engage with. One need only look at Phillips’ Taxi Driver-inspired Joker (2019) to see how a writer can confuse audiences if their villain is not written well.

There is little to no ambiguity about whether we are supposed to root for Plainview or Dunne. These are characters who are doing terrible things but remain eminently watchable. We are fascinated by their motivations, their backstories, and the systems that produce them. I Care a Lot doesn’t venture far into explaining these factors. If the film is critiquing patriarchy it does so without the depth and analysis of Gone Girl. If the film is a structural critique of capitalism and greed, it does so without the insight of There Will Be Blood. We see in great detail the gradual dehumanisation of Daniel Plainview in his quest for economic domination. I Care a Lot skips this process, plunging us straight into Marla’s psychopathy with the only explanation being that poverty “doesn’t agree with [her]”. In other words, by omitting the intricacies of Marla’s character we are denied any means through which to address a broader theme.

This leads us to the confusing final moments of the film. Marla Grayson is shot by the son of one of her victims. Given the proceeding lack of thematic exploration, the meaning of the shooting is unclear. Perhaps it’s suggesting that the blind accumulation of profit is futile and ultimately what goes around comes around. There Will Be Blood ends on a similar note, only Paul Thomas Anderson locates this futility not within the protagonist’s loss — which is near impossible under modern capitalism — but in their victory. It asks us: “what is the cost and value of financial hegemony?” Marla’s death carries no such weight. If the writing had delved deeper into Marla’s motives and backstory, perhaps it would have.

Finally, none of this is to say that I Care a Lot is a terrible film. It’s a slick, engaging, and often funny thriller with several great performances. The purpose of this article is not to castigate I Care a Lot but to explore the dynamics of portraying terrible people on the screen. It’s simply one of a few such films released in recent years that’s confused about how to do this.