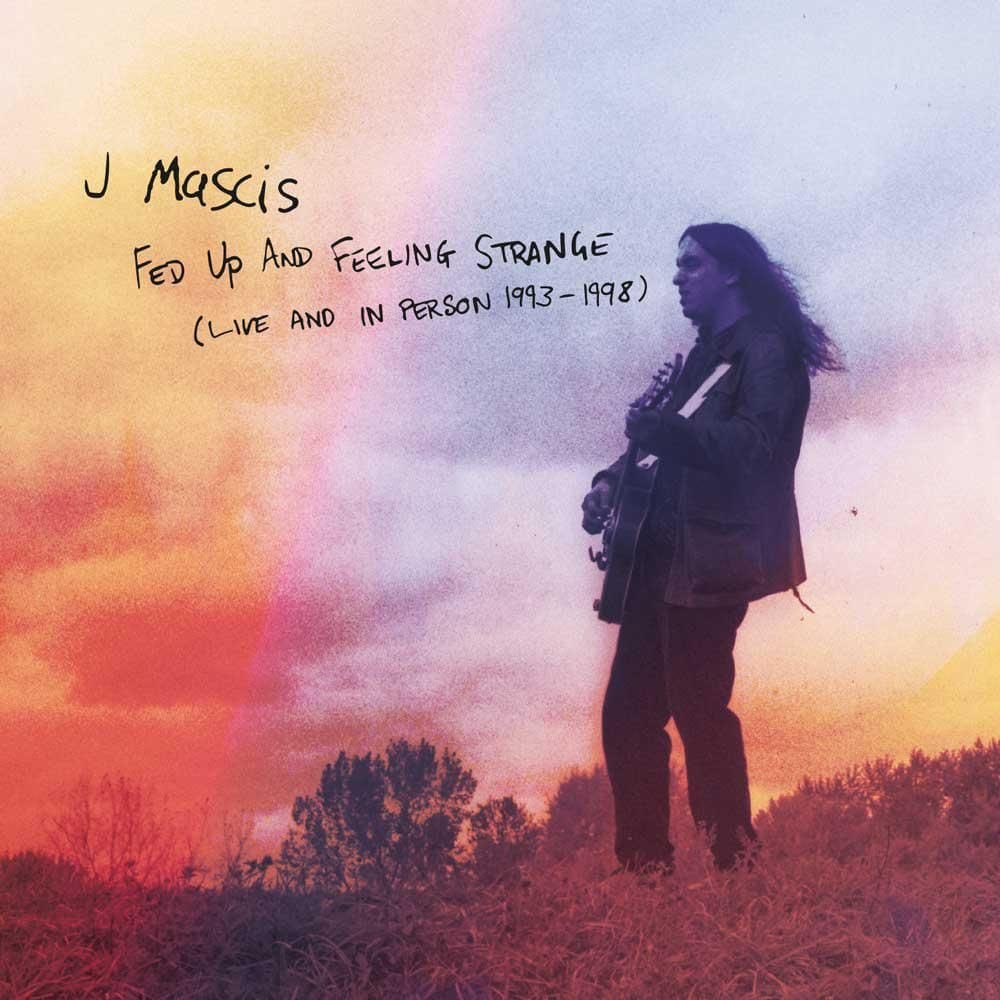 After the implosion of the Lou Barlow/J Mascis partnership in the late 1980s, Mascis signed Dinosaur Jr to a major label subsidiary and executed a run of four outstanding albums in the 1990s. Cherry Red Records have followed up on their genuinely excellent deluxe reissues of those albums by released a new compilation gathering together two previously released acoustic live records – Martin + Me (1996) and Live at CBGBs: The First Acoustic Show (2006) – paired with a previously unheard 1998 show. The performances date from December 1993 (CBGBs), fall 1995 (Martin + Me), and August 1998 (Stockholm), respectively.

Famed for the white-hot heat of his electric guitar work, it’s fair to say that Mascis doesn’t fundamentally rewire his songs for the acoustic space. There are few dramatic changes in pace or arrangement versus the definitive studio readings. On the other hand, Mascis’ playing style is sufficiently idiosyncratic that this isn’t just “Dinosaur Jr Unplugged” or “Dino-lite”. There are moments – for example, the juddering guitar work on “Not You Again” – where it’s remarkable hearing how fast Mascis’ hands are moving beneath his laconic words or that his strings survive the battering he bestows. What further distinguishes Mascis is that he isn’t worshipfully genuflecting before the acoustic guitar; he has a particular vision for how his songs should sound, and in its pursuit, he stretches the instrument to its limits.

“My first-ever acoustic performance, I’m all freaked out…” Mascis announces at CBGBs. If it’s true, he doesn’t let it show except in the tight, no-frills nature of his 12-song set. While it would be churlish to look for start-to-finish progression within such relaxed performances, it’s also hard to distinguish a growing maturity listening to these shows front-to-back. In truth, even in 1993, Mascis was already a consummate performer. What can be said is that he loosens up a lot in Copenhagen: bantering with the audience mid-song on “Drawerings” (“I’m doing the metal part because I know you Swedes love the metal!”) and doesn’t sweat dropping in filigreed guitar patterns or momentary pauses to punctuate songs.

It’s visible that Mascis has carefully selected songs that shine in these more intimate settings, that it isn’t just a rollcall of the hits with no attention paid to place. There’s a blend of songs from every stage of his career but minimal crossover with the greatest hits record Ear-Bleeding Country. The result is a selection of deep cuts all worth re-exposure. The core is drawn from Green Mind (1991) and Where You Been (1993), but there are also six songs from Dinosaur Jr’s 1980s run, four released after 1993, four single b-sides, four covers. Similarly, while there are a half-dozen songs at the center of all three sets, three to six songs are unique to each. It’s all incredibly well-weighted whether one is a long-time fanatic enticed by the new show or a relative newbie curious to hear a rightly-celebrated figure cutting loose acoustically.

There are the four cover songs for fans with a yen for rarities, all so clearly beloved that Mascis makes them his own. I confess that Mascis’ gorgeous rendition of Carly Simon’s “Anticipation” is so in tune with his lovelorn lyrical persona that I’ve spent two decades believing he wrote it. It’s a feeling I can’t shake even when the man himself says in these liner notes, “I mostly knew it from Heinz Ketchup commercials.” Mascis previews “Too Hard”, a highlight from his short-lived J Mascis and the Fog project. A previously unheard performance of “Grab It” is tagged onto Martin + Me, and I’m surprised it was ever cut given how good it is. Starting with a hum of warm static, it’s a fun tale that Mascis stops to praise this compilation’s only moment of unadorned raw electricity. His gentle and detailed finger-work gives way to tense strums making no allowance for the instrument’s capabilities, a pure tactile throbbing.

It’s intriguing to note that in Stockholm, Mascis allows himself to dip a little deeper into the 1980s. With Dinosaur Jr enduring the dispiriting fizzle of their relationship with Reprise/Blanco y Negro, with the band’s seventh album Hand It Over woefully undersold, it’s perhaps the case that Mascis would reach back to when Dinosaur Jr were hopeful trial-blazers. It is a touch sad seeing, though, that he also chooses to neglect Hand It Over: “Alone”, that album’s emotional centerpiece, is reduced to a solitary minute while “Sure Not Over You” halts so Mascis can suggest the audience sing it themselves, then it never recovers its drama or momentum. It’s hard to be grudging with praise here given near everything here is either acoustic-rock fun (the 50 seconds of “Throw Down” are filled with quotables and shows hardcore punk precision works unplugged too) or sheer beauty (the yearning “Flying Cloud” with its hopeful flourishes and sudden sombreness).

It reinforces the personal nature of Mascis’ performances that it’s so clear why
Bug (1988) is ignored altogether (barring two single b-sides), and there’s just one solitary song from Without a Sound (1994). Bug, marred as it was by the fraying of his relationship with Barlow, is Mascis’ least favorite album, while he’s been honest about ambivalent feelings around Without a Sound given his dad’s death at the time. It’s typical of Mascis’ career that the result is these shows neglect Dinosaur Jr’s most popular and most commercially successful albums respectfully.

That charming/maddening self-depreciation comes through most clearly in Stockholm, where the exuberant audience aim for a sing-along at the start of “Get Me”, only for Mascis to break the lighter-in-the-air worthiness by murmuring “bluh-bluh-bluh” in place of a line of lyrics. It’s hard to begrudge what sounds like a rollicking good time had by all on each occasion. Still, while each performance is solid and often beautiful, I do wish for a moment of absolute transcendence and majesty. That could only arise by taking things seriously, almost to the point of retention. In such skilled hands, it would be a risk worth taking.