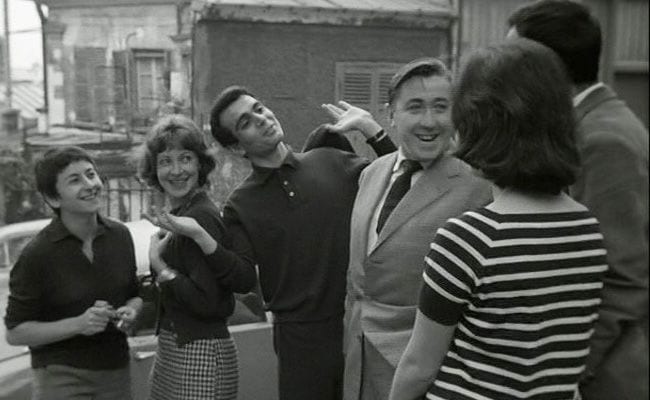 Jacques Rivette is the French New Wave icon no one really knows. Often considered the fiercest of the Cahiers du Cinéma critics, and arguably the first out the block with his 1956 short Le Coup de Berger, Rivette directed 20 feature films, many of them hitting lengthy running times (his 1971 Out 1 runs to nearly 13 hours, for example).

Interested in an eclectic mix of conspiracy theory, theatricality, and improvisation, Rivette worked these themes over many times, developing a style all of his own. While his debut is very much a work in progress, Paris Belong to Us provides all the buildings blocks for the career to come.

At first sight, the story is long, slow, and rambling, until Rivette connects a few, although by no means all, of the dots. Wrapping everything up succinctly would have only betrayed the project anyway. This is not clear, snappy filmmaking in the old Hollywood studio style, nor does it come with the revolutionary jump-cut, rip up the playbook fervor of Godard, his most famous contemporary. Rivette’s debut, actually made before any of the other New Wavers but not released until 1961 due to post-production and distribution problems, treads a middle-line, setting out the template for the very different path Rivette will follow in later years.

It all starts so simply. After journeying through Paris, the camera arrives at the apartment of Anne Goupil (Betty Schneider), a literature student sat reading The Tempest. Down the hall is a Spanish woman mostly absent from the film yet significant all the same. Invited to a party by her brother Pierre (François Maistre), she meets an angry, paranoid American exile Philip Kaufman (Daniel Crohem), theatre director Gerard Lenz (Giani Esposito), and his partner Terry Yordan (Françoise Prévost).

They will play important roles, even if the true nature of each character is rarely transparent. The final figure of importance is Juan, a Spanish activist, ex-partner of Terry, brother of the Spanish student, and composer of the play Gerard plans to stage. Except he’s already dead — suicide, apparently — though Philip believes otherwise.

The fact Gerard attempts to put together a production of Pericles, a Shakespeare play unfathomably hard to stage with unlimited resources, but with no money, sums up much of the film. Everything is confusion; everything is changing. Anne, meets up with an old school friend, crashes one of the rehearsal sessions, and as the cast keep quitting, gets hired almost on the spot. This thrusts her into the confusing triangle Gerard, Terry, and Philip have going on. Philip is worried no one is taking Juan’s death seriously: the others deem him paranoid. Anne somehow emerges at the center of everything, deciding to hunt down Juan’s missing tape of compositions for the play, and find out what happened to him in the process.

The more their world teeters on the brink, the more important Schneider’s performance becomes. She’s also another early signpost in Rivette’s career. Many of his films feature a female-centric view of the world: something all too rare even today. It’s through her eyes that we fall further into the mysteries of Paris Belongs to Us. She’s often perplexed, requiring numerous explanations, but her unshakeable determination sends her barreling further into the confusion. It’s more than just a staging post for Rivette of course. Schneider is the shining centerpiece standing tall amidst the maelstrom. She anchors the film, providing the only fixed point in a world of moving parts. Without her presence, the whole thing would fall apart at the seams.

Part of that is intentional. Rivette’s Paris is a confusing world. Trust seems to be in short supply and an air of dread hangs over everyone. Whether the conspiracies spouted by Philip are true or not, enough people plunge down the rabbit hole together in pursuit of them. This Paris reflects the uncertainty with use of the great city confined to the background, with landmarks captured from off-kilter angles. Most of the time Rivette completely ignores the postcard shots, with action taking place away from tourist hotspots in apartments, rehearsal spaces, and along shop fronts. Available light sources are mined for all their worth, casting odd shadows and strange perspectives on characters as the narrative begins to spin out of their control.

Not all of the disconnect works. Short compared to later efforts, there are still long, baggy stretches that start to drift aimlessly. Anne’s quest for the tape sees diminishing returns as she pops up with the same set of questions across the city. Later films in his canon develop an improvisational style that brings fluidity to these free-floating passages. Paris Belongs to Us still comes with a feeling of top down control that stifles them. There’s also too much of a reliance on detective tropes — the missing item, the secretive foreigner, the shadowy figures behind the scenes — to fully break into the chaotic mystery the narrative strains to be. It’s the work of a filmmaker playing with ideas that haven’t yet fully formed into a distinct style.

This sporadically engaging and frequently interesting debut demonstrates the strengths that Rivette builds upon in later years as he crystalizes his style. Unlike many of those around him in the New Wave, Rivette doesn’t strike gold at the first attempt, but Paris Belongs to Us is still a worthy, if flawed effort. Stick with his work though, as greater things are just around the corner.