Jaime Wyatt‘s Neon Cross arrives 29 May via New West Records. The LP, which was produced by Shooter Jennings, gives us a glimpse into Wyatt‘s tumultuous life: Addiction, recovery, the loss of her father and a close friend, plus the complications that come with the simplest situations.

The titles tell part of the story: “Goodbye Queen”, “Hurts So Bad”, “Sweet Mess”, and “Demon Tied to a Chair in My Brain”. But the music inside them reveals something more profound: An artist whose sensibilities run the gamut between the classic and the contemporary, between the heights of the human heart and the depths of despair. At times reminiscent of early Emmylou Harris or Jessi Colter (who makes an appearance on the album), one can also hear (perhaps unintentional) of the heartbroken narratives of the late Judee Sill.

Wyatt and her mother have created a new video in which they discuss their relationship, family tragedy and addiction as well as hope they’ve found in recovery. Wyatt says, “This video was created and directed by my dear friend and collaborator, Magda Wosinska. Magda directed the video for my song ‘Wasco’ and, most recently, the video for the title track on my album Neon Cross. She wanted to highlight my unique relationship with my mother and how I’ve been able to repair our relationship through my recovery.

“Magda was following me and photographing me for about a year in which I had relapsed on drugs and alcohol and was grieving the loss of my dad and close friend. During this time, my mom had to witness my degradation and took the brunt of my addiction. I’m now making living amends to my mother, and I’ve written a few songs with her and gotten to sing with her, which is documented in this video. Also, in this video, I get to formally apologize for throwing a brick through her window while under the influence.”

There’s an element of the record that’s in touch with the country and singer-songwriter albums of the 1970s. Were you influenced by that music?

Maybe. I’ve spent a lot of my life in a van touring, so I get to dig through and listen to so much music. When I wrote this album I was listening to a shit ton of Waylon, Jessi, Merle, Rolling Stones, Tammy Wynette, George Jones, Gary Stewart, Loretta Lynn, and even Lynyrd Skynyrd.

I love the way the album opens with “Sweet Mess”. So many records begin with a big, anthemic sound. This is more powerful because it’s such an unexpected way to begin.

That was Shooter’s idea, but I instantly felt it made a statement. Putting this song first will likely weed out the listeners who don’t or won’t wanna slow down and feel. This album is about feeling. It documents some of the most painful experiences of my life, and as Americans, I truly believe we don’t have time to feel, so our unacknowledged or unexpressed feelings come up in weird and inappropriate places if we don’t pay attention to our mental health. Consider this album an appointment to feel and get in touch with your own emotions.

How did “Neon Cross” become the title of the album?

The title of the album is referencing the huge Neon Cross on the hill overlooking the 101 freeway, across from the Hollywood Bowl. I used to see that cross while in an Uber or cab in the early hours of the morning, on the way back from partying in the bars and after-hours clubs in Hollywood, Silverlake, and Echo Park or Downtown LA.

I don’t believe that cross is actually neon, but to me, it was neon because being a performer and playing music in bars has given me the will to live, several times when faced with the very, very difficult decision to get clean and stay clean. I mean, I’ve really come to terms with the fact that “The nightlife ain’t no good life, but it’s my life.” Actually, it’s a great life when I don’t have to have a hangover ever again!

Jessi Colter sings on “Just a Woman”. She’s Shooter’s mom, but she wouldn’t have come into sing on that tune if she didn’t like it. That must have felt great to have her sing on the track.

Having Jessi sing on the album was so perfect and an absolute dream come true. I wasn’t sure if she’d do it, but when I asked Shooter to ask her, he was certain she would do it. He had mentioned a few times that Jessi really liked my voice. I had sung an unreleased Waylon Jennings song with Shooter on an album a couple of years prior, and Shooter made sure to tell me that Jessi had commented on my version in particular.

It would be an assumption, but I did wonder if Jessi had met more misogyny than even I have in my life since she comes from an earlier generation. But we did get this quote from Jessi about singing on the song: “Take a listen to Jaime Wyatt’s humorous admission of the age-old problem of the male and female condition!” 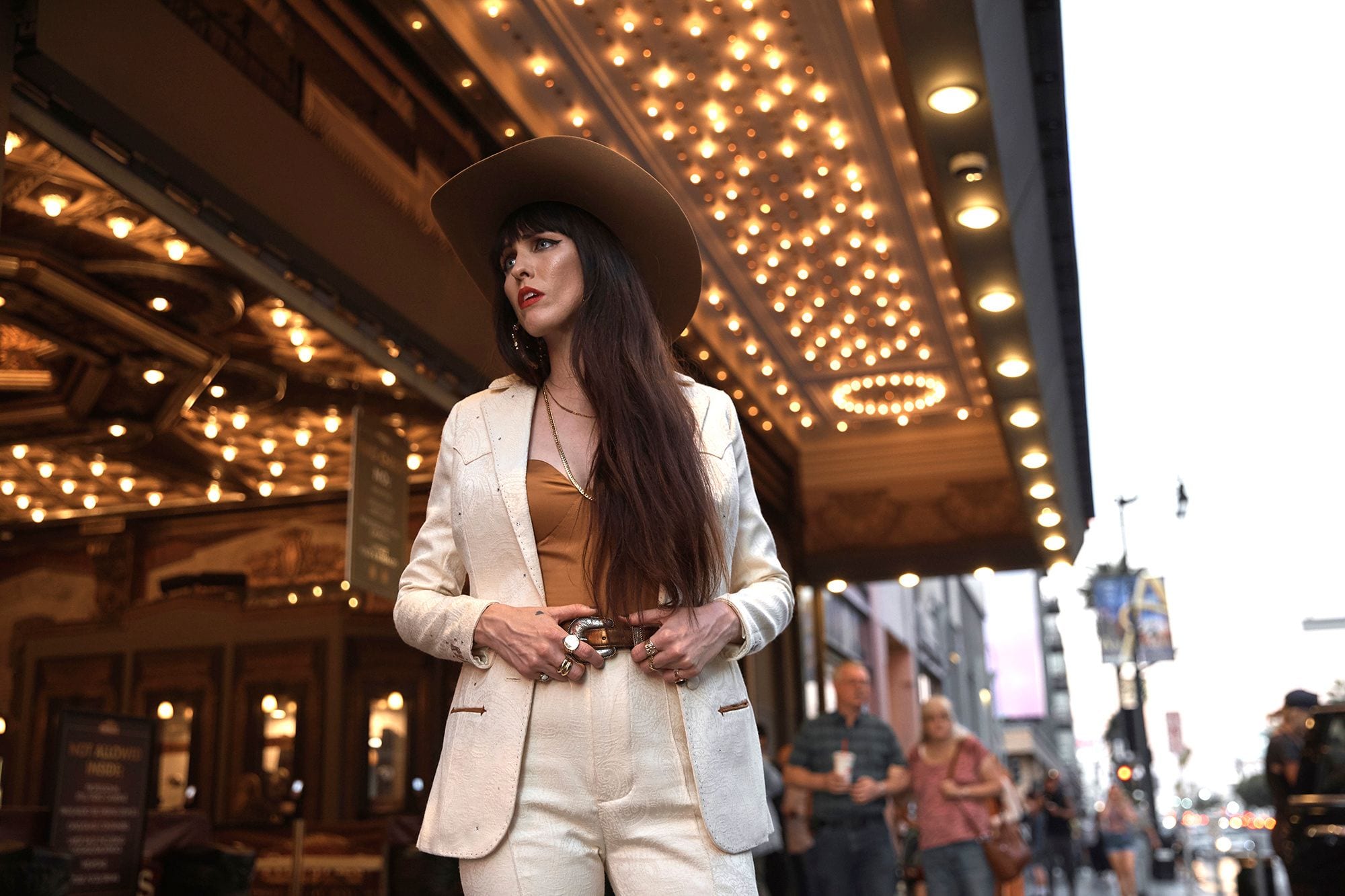