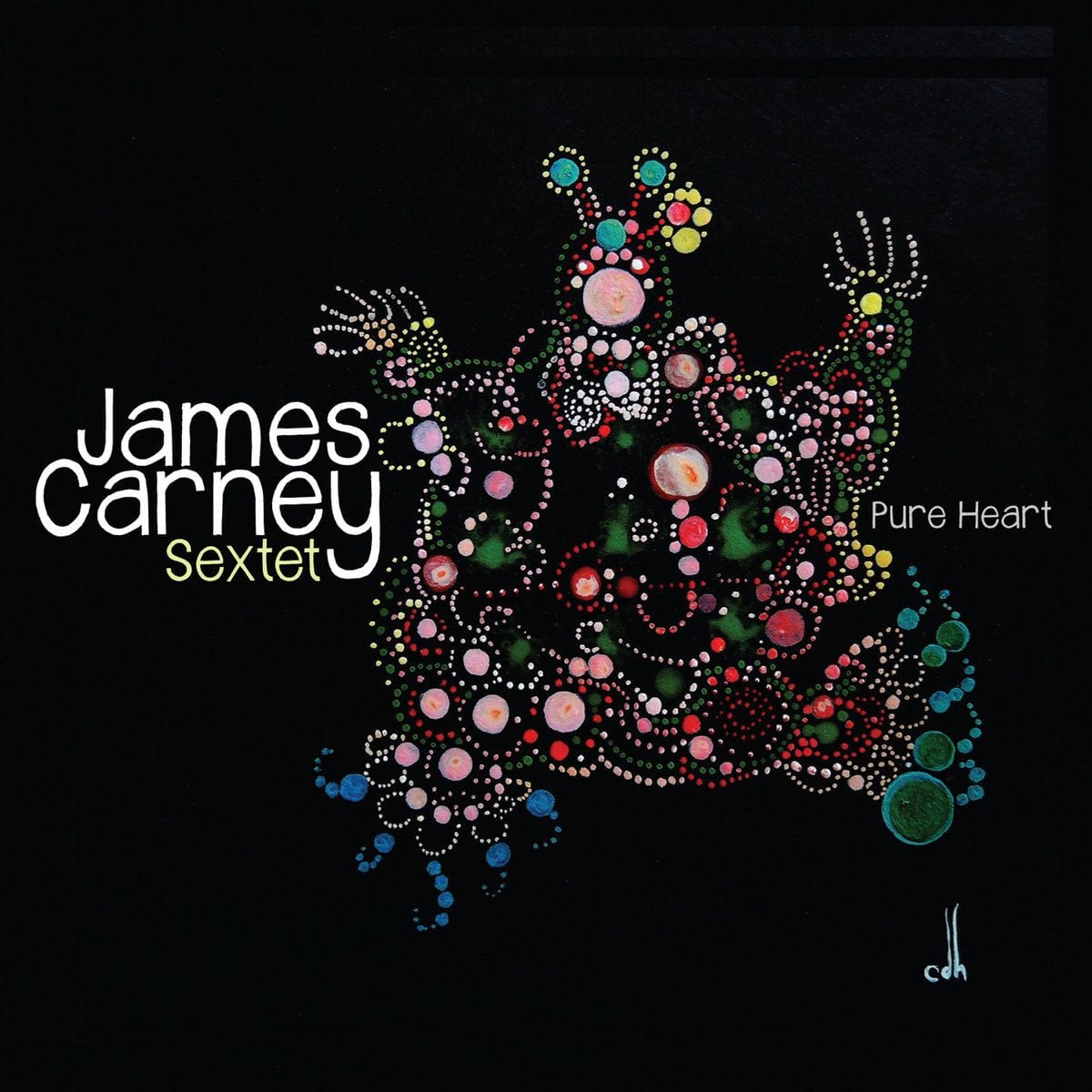 In 2007 and 2009, pianist and composer James Carney released two septet records on Songlines that were dazzling examples of the orchestral possibilities of the new jazz. Greenwood used four horns, Fender Rhodes piano, and buzzing analog synthesizers to blend classic modern acoustic jazz with new ideas about how funk and pop forms could mingle with compositional/improvisational complexity. Ways and Means used the same range of players and sounds to more cinematic effect.

Carney took a break from recording in recent years. However, he was a critical presence on the Brooklyn jazz scene, curating (and often playing in) the weekly Konceptions performance series at Korzo, a Greek restaurant graced by a superb piano and listening space in the back. With Pure Heart, Carney returns with a new sextet, extending his artistry as a composer and musical thinker. He hasn’t lost a step.

The band here is slightly smaller and lighter on its feet, with just three horns plus rhythm section. Carney’s old friend Ravi Coltrane is on tenor saxophone, joined by Stephanie Richards on trumpet/flugelhorn and the clarinetist Oscar Noriega, who also plays some alto saxophone. Konceptions regular Tom Rainey is on drums, with bassist Dezron Douglas completing the band. The result is a recording that is still built around intriguing, appealing, puzzle-box compositions, but that also allows more open space for improvisation of a very high order by instrumental voices that have strong sonic personalities.

The first striking thing about Pure Heart is how often these players—several of whom were playing together for the first time in the studio for this recording—improvise collectively. On “Gerrymandered”, for example, the rushing 8/8 flow has a theme that goes from a gentle flow featuring Richards’s horn to a gripping unison line. Then, as if the clouds were parting over an open field, the three horns let go of the written melody and begin a misty, playful joint improvisation, moving in flowing rotations around each other. While Carney holds the rhythm section over a static pedal point, trumpet, bass clarinet, and tenor saxophone move around each other gently, like dancers. Coltrane sounds light, ripe, and flexible, and Richards sounds conversational as Noreiga uses his bass clarinet to prod and probe along the bottom. The interplay grows busier and more blues-drenched as it develops, however. Eventually, the horns grow more aggressive and dissonant, flying free, as Rainey punches in thrilling counterpoint, and Carney discovers roiling patterns for accompaniment that are, themselves, interesting improvisation.

The opening track, “Inharmonicity”, has a more consonant, engaging theme built around a hip piano figure, one that struts with syncopation and incorporates the horns. But it, too, moves into collective improvisation after that, one that develops considerable shape and interest over time. It grows in intensity and then eases up, the whole band collectively molding a highly composed work into something that is truly being composed in the moment. The horns soften and thin out, Rainey clicks on the head of a snare like a master of the castanets, Carney reaches inside his piano to play the strings with his fingers, and the piece never returns to its first written theme at all, refreshingly. It trickles to its interesting conclusion.

Carney makes this band work as a sensitive small band too. “Forty Year Friend” is a ballad that begins just for a quartet, with Coltrane playing a yearning melody. Then Carney brings in trumpet and bass clarinet for a second theme that limns the first with more color. The arrangement gives Noriega a legitimate “solo” on his lovely bass clarinet, with Carney’s dark chords flowing beneath him—a more traditional jazz performance, although Noriega hardly respects the strict guidelines of the harmonic pattern. After his turn, Richards and Coltrane come in to play a duet improvisation, with Noriega remaining with the rhythm section, playing inside the harmony again. The flugelhorn and tenor tumble over each other in utter sympathy. Where they conclude sounds composed but, frankly, it is so fluent and natural that it is equally plausible as perfect improvisation. (Jim, never tell me—I’d rather not know!)

The band can have fun too. “Mayor of Marcellus” is a twisty-turny lick over a deliciously funky odd-meter groove, and the band keeps playing it even as improvisation takes place. Douglas carries it with his pungent bass tone, Carney never quite lets it go, and the horns go in and out of playing it, embellishing it, or departing from it. The effect, with Rainey keeping up a New Orleans-y kind of chatter, almost makes the band sound like a hypermodern version of Armstrong’s Hot Seven. And you can dance to it. “Throwing Shade” cracks too—the recording’s longest track but also very playful.

Like Aaron Parks, though with a very different sound, Carney often builds his themes out of rotating piano figures that act as motifs in the head and in the improvisations. Here, again, he lets Noriega solo out front, and individual statements follow. Coltrane sounds as good here as you likely have ever heard him, his pleasantly ripe sound working well in his light, upper register. Richards plays her best solo here too, much of it in dynamic conversation with Carney, playing lines and chords behind her in thrilling counterpoint, quoting from a famous Miles Davis record at one point. Carney gets a legitimate solo of own as well, and he proves compelling both in the spotlight and at the tune’s end, when he lets Rainey and Douglas take their collective improvisation along with him, quietly.

As a pianist, Carney is underrated, as he isn’t a frequent sideman on other recordings, unleashing mad solos on material composed by others. In that way, he is like Vijay Iyer, Jason Moran, and other of the most interesting “jazz” pianists today: sublimating their playing to their concept. It is an Ellingtonian approach. But like Duke, Carney produces music that lets his bandmates rise to dramatic heights within his framework. He rises with them, but there is a self-effacing quality to his playing or to how he positions himself within the group.