“We didn’t invent violence. We met it there.” – quoted from one of the collective’s student films.

The geist, or spirit, of the German people is forever marred by shame regarding the systematic murder of millions, mostly Jews, during the Holocaust (the Shoah in Hebrew). On this topic, critical theorist Theodor Adorno wrote, “To write poetry after Auschwitz is barbaric.” Adorno was expressing a fear that society would soon forget the horrors of the Holocaust and place itself once more on the precipice of calamity.

But what are the downsides of being all-too-aware of your forefather’s sins?

This question, amongst many others, is posed by French filmmaker Jean-Gabriel Périot in 2015’s
A German Youth (Une jeunesse allemande), a visually rich documentary tracing the radicalization of German activists in the 1960s and ’70s, which included the founding and subsequent hounding of the far left-wing terrorist group, the Red Army Faction (RAF).

Within minutes of the film’s opening, we are witness to the instability defining West German society circa the early to mid-’60s. The youth of Germany is coming-of-age politically and beginning to question the validity of the War generation’s authority. In their eyes, not enough has been done to eradicate the legacy of Nazism. The cowardice and subservience of the War generation led to widespread suffering, and now former Nazis are in power. Banal arguments, such as being told by the older generation that they “had to obey” or that it was not them who led Jews to the gas chambers, will no longer suffice.

Suspicion permeates the air, and the kids are not alright.

This suspicion is embodied by the film’s main subject, Ulrike Marie Meinhof. Only in her late-20s, Meinhof, as editorial director for the magazine

Konkret, is already a prominent left-wing figure. Participating in a televised panel titled “Authority in Decline”, she takes the opportunity to declare all authority figures, from parents to the Catholic church, devoid of credibility due to their connection to Nazism. The setting, while politically charged, is calm—a stark contrast to the chaos Meinhof will be surrounded by in years to come.

Périot wastes no time in introducing the audience to the major participants in this years-long culture war, including filmmaker Holger Meins, lawyer Horst Mahler, Andreas Baader, whose surname is one-half of the RAF’s nickname, the Baader-Meinhof Group, intellectual Gudrun Ensslin, and the right-wing media conglomerate Axel Springer, the target of much of the activists’ vitriol. They’re introduced via clips from collaborative student films and direct actions, with brief biographical details that paint them as an intelligent and charming bunch.

Several of the film’s memorable moments come from these clips, specifically Die rote Fahne (The Red Flag), a relay-race through the city of Berlin in which a red flag, acting as a baton, is ultimately placed on the balcony of the mayor’s office. The clip embodies an optimism, both brash and blind, in the runners’ indifference to the traffic surrounding them, an attitude inherent to the West German Student Movement in 1968.

Yet, this early optimism is littered with hints as to what awaits the revolutionaries and German society. This should come as no surprise since Périot poured over a thousand hours of archival footage while crafting the film. There is talk of “unmasking society”, the respective roles of the gun and the camera, and not initiating violence but “meeting it there”. 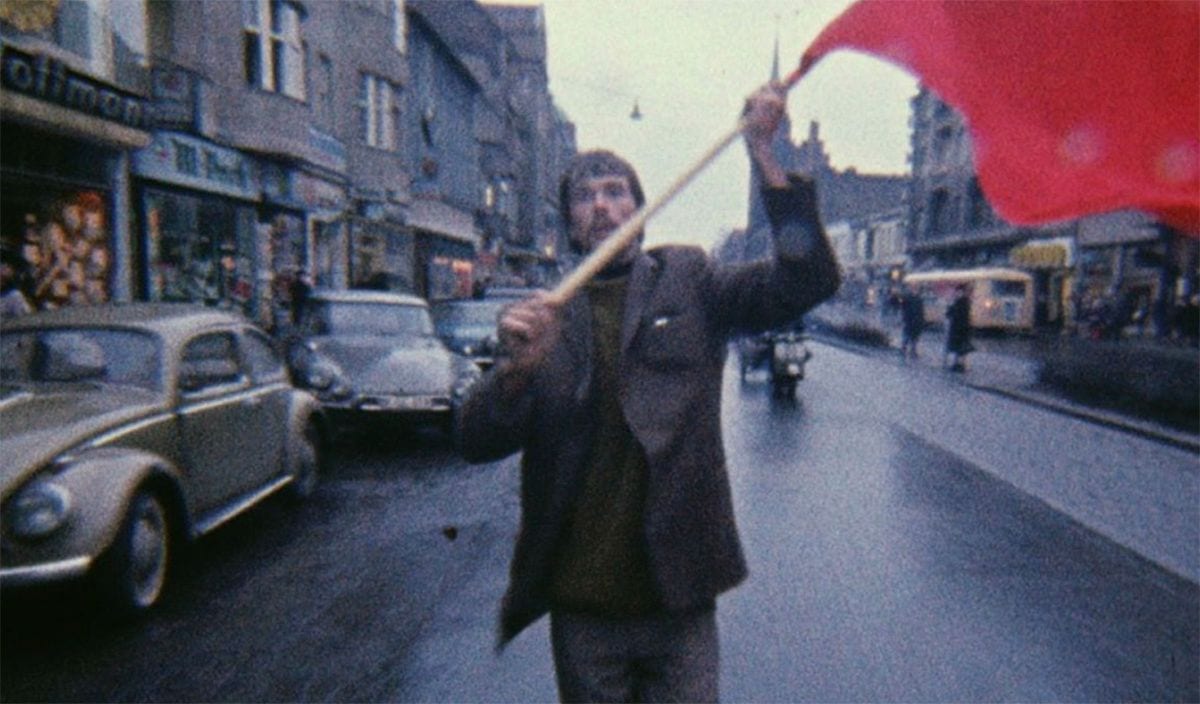 It might seem, in the early part of the documentary, that these charismatic people are not potentially violent revolutionaries, but characters in an early Jean-Luc Godard film. One expects the film to cut to the radicals in old age, armchair intellectuals employed at top universities in Europe, discussing their youthful follies.

Yet Périot keeps us enveloped in the history playing out before us. As we zipline through the events of 1968, a year of global upheaval, the situation in Germany is further dissolving. Street battles are the new normal, and radicals are being bludgeoned and shot by the police and reactionaries.

We now find ourselves in a society in which its most gifted students have become hardened leftists.

It is this very evolution that drives the third act of the film. The liberation of Andreas Baader from prison in 1970, by an armed group including Meinhof, ups the ante on revolutionary practices. After years of protest, via the streets and the camera, nothing has changed in the eyes of the radicals. In an interview from Der Spiegel around the time of Baader’s liberation, Meinhof states, “Mere words won’t transform leftists into revolutionaries…armed struggle is becoming commonplace…” And thus, the Red Army Faction is born.

A sudden cut plunges viewers into yet another televised debate, this time on political violence, an increasing concern among Western nations. Meinhof is missing. An ideal voice on the subject, she has gone underground and is preparing, along with other members of the RAF, to commit the very acts being debated. After a brief stint training in the Middle East, the radicals return to conduct a series of bank robberies, bombings, and assassinations. In 1972, Baader, Meins, Ennslin, and Meinhof are arrested after a massive operation involving hundreds of police officers and a newly formed anti-terrorism unit.

While imprisoned, Meinhof is denied interaction with other prisoners or any “social activities”. She, along with her comrades, are subjected to a harmful level of isolation, isolation in which the prisoners can never display an “improvement” in their behavior. Meinhof theorizes that the state does not wish to see a change in their behavior but only aims to torture. And it is in this pivotal moment in the latter stages of the film, that t he distinction between being critical and destructive is brought into question.

While the RAF is responsible for dozens of casualties, the authorities have relinquished democratic principles in the name of liquidating a handful of enfants terribles. In 1974, Holger Meins dies after a 56-day hunger strike. Two years later, Meinhof is found hanging from the bars of her cell in Stammheim Prison, a death still questioned to this day.

Nearly a year after Meinhof’s death, a series of events known as the “Deutscher Herbst”, or German Autumn begin, which resulted in the kidnapping of Hans Martin Schleyer, then-president of the Confederation of German Employers’ Association (BDA) by the RAF and the hijacking of a Lufthansa flight by members of the Popular Front for the Liberation of Palestine. These actions, meant to lead to the liberation of nearly a dozen RAF prisoners, ultimately prove to be the swan song of the first-generation of RAF militants. An anti-terrorism unit liberates the Lufthansa flight in Mogadishu, leading to the deaths of three of the four hijackers. What followed was the apparent suicides of Baader, Ensslin, and Jan-Carl Raspe, followed by the murder of Schleyer.

“They are dead,” says director Rainer Werner Fassbinder in a clip from Deutschland im Herbst (1978), a collaborative film about the events of 1977. It is in this scene, the last of the film, that the distinction between being critical and destructive is brought up once more. More so, it is a discussion of democracy’s relationship to terrorism.

Fassbinder and his mother are arguing about the methods used to deal with the RAF. The elder Fassbinder, who lived through the Third Reich and is now a supposed champion of liberal democracy, admits that she would’ve like to have seen terrorists executed in public. She believes in the suspension of democratic processes in the face of a grave threat, such as that posed by the RAF. It is a moment that brings to mind the reaction of governments in the wake of spectacular terrorist actions, such as 9/11 in the United States and, more recently, ISIL-inspired attacks across Europe. The conversation ends with Fassbinder getting his mother to admit that her preferred state would be run by an authoritarian leader who is “quite good and orderly”.

And so, we are returned to the contemporary world.

Périot’s kinetic visual essay, his first feature-length project, holds prescience at a time when Western nations, Germany included, are once again reflecting on national identity and dealing with political violence.

While Périot has stated that in making A German Youth he sought to “open the door to a more complete discussion about the nature of the acts” of the RAF, the film misses several opportunities to construct a milieu of post-1968 revolutionary activity. The RAF wasn’t a singular phenomenon, for its members were on the same Marxist mission as the Weather Underground and Black Liberation Army in the United States, the Brigate Rosse in Italy, and the Japanese Red Army. However, for a film that leaves an audience, especially those students of politics and history, begging for more archival footage, a reticence to expand the story’s focus is understandable.

Regardless of what emotions the RAF elicits, A German Youth is an undeniably breathtaking portrait of the last of the romantic militants. The geist of the German people was forever altered by a handful of children, whose toys were rhetoric, cameras, and guns, and who were unapologetic in their barbarously poetic duty.