First Name: Carmen (Prénom Carmen, 1983), Détective (1985), and Hélas pour moi (Oh, Woe Is Me,1993) are neither among French director Jean-Luc Godard’s most beloved or most discussed films, nor were they particularly ambitious or innovative productions. Made well after the director’s most admired, prolific period and soon after his most extreme and militant, these films — just three small dots on a dense and mottled timeline of new and complex visions — were only a taste of Godard’s highly-publicized return to commercial cinema after years entrenched in experimental moviemaking.

It’s easier, perhaps, to examine works of art in the context of a cultural movement. It’s easier to label them as distinct entries in a larger catalog of work that constitutes an artistic mode, which can be placed within a linear, historical chronology. For a large portion of Godard’s career, this is a simple enough exercise; from his first feature, the groundbreaking Breathless (1960), until Week-end (1967), his work helped define the aesthetic and philosophical principles of the French New Wave.

From the late ’60s through the ’70s, his work became more radically political and exploratory, directly inspired by Mao and the revolutionary Soviet filmmaker behind the formative documentary Man with a Movie Camera (1929) and the agit-prop newsreel series Kino-Pravda, by Dziga Vertov, Elizaveta Svilova, and Mikhail Kaufman. This political era went some way toward pushing Godard out from institutional acclaim and attention. When he returned to mainstream filmmaking in the ’80s, it wasn’t so much a comeback or a revival, but a passage into a new era. This era, however, was much harder to delineate than before.

That is to say:

First Name: Carmen, Détective, and Hélas pour moi are not easily defined films. As challenging, provocative, or borderline incomprehensible as some of Godard’s ’60s and ’70s movies undoubtedly are, they have the benefit of being understood as fragments of a broader story — pieces of a whole. Moving into Godard’s second wave, though, his films became more interior, singular, and separated. It was a period of indefinition. For the second time in his creative life, Godard in the ’80s must have felt the full potential of total artistic liberation. In this period, especially, if not others, Godard took an interest in dramatically reinventing his cinematic idiolect with each production.

The range of styles, ideas, and values tested during the latter half of his career in the 20th century is staggering for an artist in any medium. The period culminated in his mammoth masterpiece ten-year video project, an eight-part film essay duly titled Histoire(s) du cinéma (1988–1998). In these three films alone, Godard’s influences spanned across worlds of time and culture. First Name: Carmen is an oblique modern update of Georges Bizet’s opera. Détective, with its ensemble of prizefighters, mafiosos, and sleuths, is inspired by classic film noir. Hélas pour moi is based in spirit on the story of Alcmene and Amphitryon of Greek mythology.

It’s not as though the New Wave movement or the Dziga Vertov Group-era imposed strict ceilings on Godard’s vision, because of course they didn’t. But for once, Godard wasn’t immediately surrounded by contemporaries and collaborators or part of a larger campaign. He was free to stage his own private revolution. With Kino’s Blu-ray releases of these curiosities from Godard’s return to commercial cinema, viewers now have three easily accessible entry points with which to acquaint themselves to an overlooked stage in the career of one of the last living auteurs of classic European filmmaking. 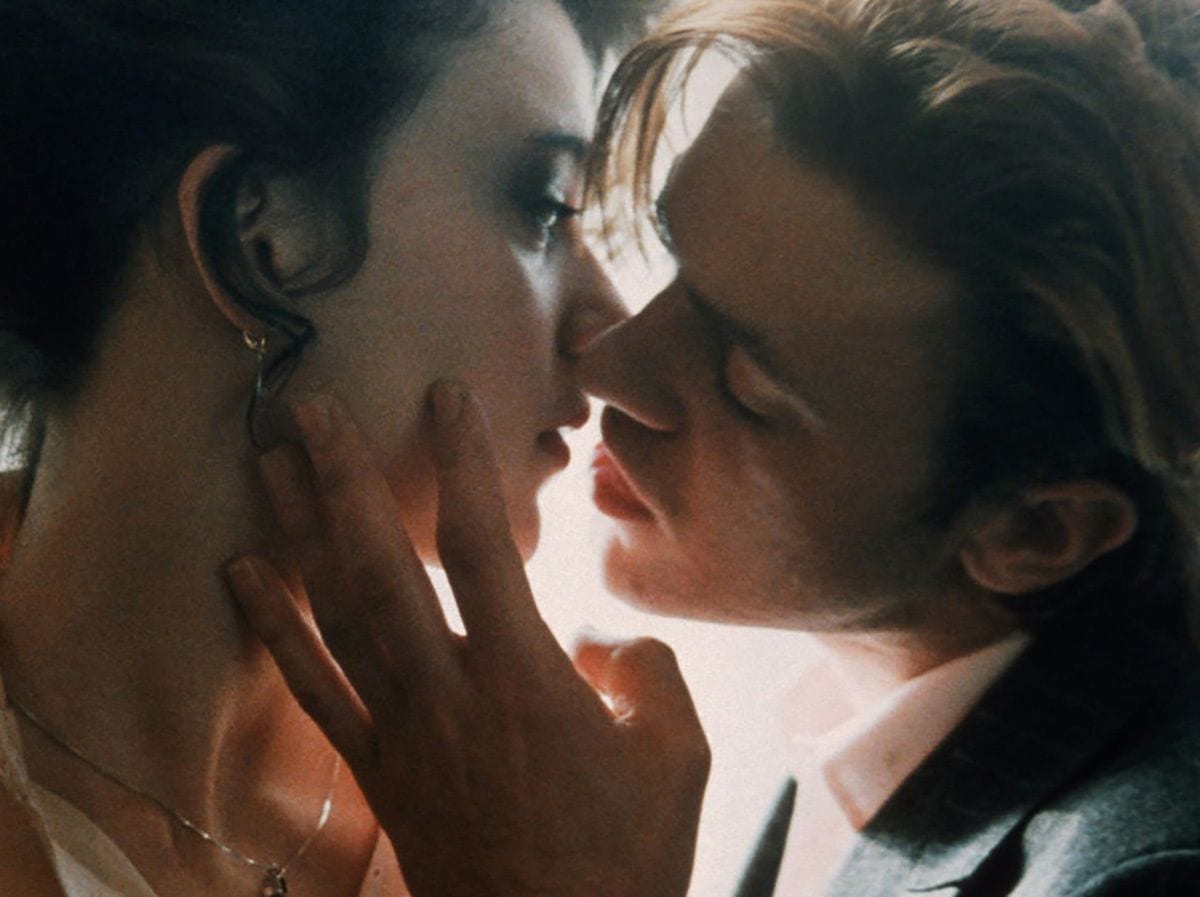 First Name: Carmen, the first of these, was originally released in 1983, just a few years following the release of what Godard once called his “second first film”, Every Man for Himself (1980). In First Name: Carmen, Godard crafts a braid of intertwining narratives and images. These images exhibit his continued distrust of mainstream, institutional filmmaking. Indeed, he spent the last decade in fanatic resistance — even as he was quietly rejoining that mold. In the film, Godard plays a version of himself referred to as “Uncle Jean”, an unwitting and down-and-out film director confining himself to a mental hospital. Meanwhile his niece Carmen (Maruschka Detmers) plots a bank-robbing and kidnapping scheme under the guise of making a film.

The core of the story is Carmen’s inexplicable love affair with a bank security guard named Joseph (Jacques Bonnaffé), but there are many distractions. For example, in another mostly unrelated section, a string quartet practices the works of Beethoven, which soundtracks the movie. Despite its experimental convulsions and Godard’s lingering suspicions of conventional filmmaking, First Name: Carmen is a gleeful oddity of mainstream cinema — occasionally crass and even incomprehensible, yes, but a return-to-form in any case.

With its fourth-wall breaking antics, audaciously matter-of-fact treatment of sex, one-liners, and visual gags, the movie is surprisingly non-serious and youthful, even fun. Were it not for the film’s diversions into slapstick comedy and self-deprecating irony, general audiences would likely find First Name: Carmen a frustrating index of metatextual references, crossfiring genre tropes, and cryptic symbology with deeply esoteric threads of relation.

As it stands, anyone looking to make total sense of it is out of luck. First Name: Carmen is an encyclopedic novel without footnotes or, occasionally, even lucid storytelling. (Craig Keller’s commentary provided with the Kino release goes some way toward illuminating the movie’s labyrinth of offhand allusions to Shakespeare, Proust, and Otto Preminger’s film Carmen Jones, among others). Its ideas are broad, though. Godard explores the volatility of youth through Carmen and Joseph’s romance; the shallow values and authority of film industry dealing through his own character; and the dubious compatibility and reappropriation of classic art in modern life through the string quartet and his slate of artistic references. Densely layered in meaning but tightened with anarchic verve, First Name: Carmen is a playfully elusive reactivation of Godard’s New Wave dreams in a new age of artistic development. 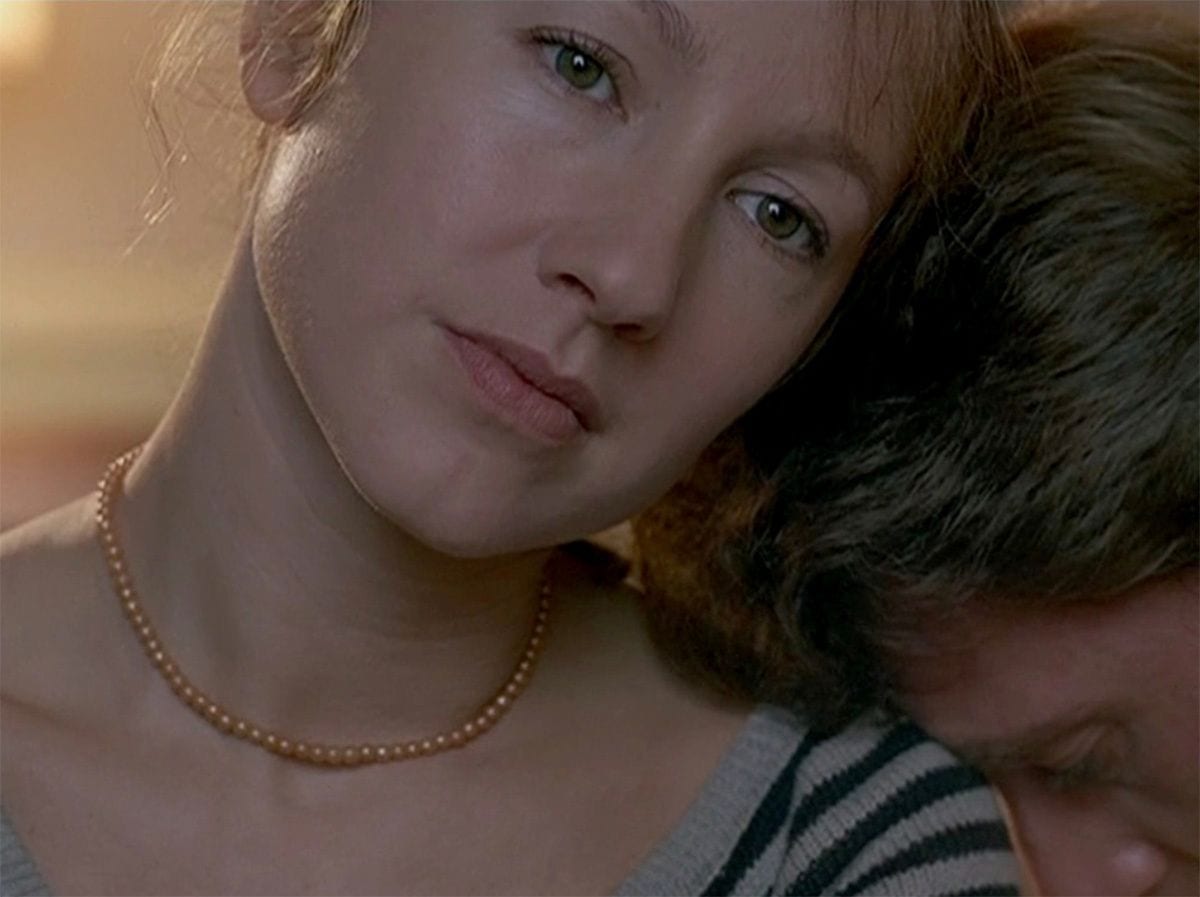 Given the expansive cast, the film is a chaotic mingling of personalities, stories, and relationships, but its observations on the dissociations of modern urban life are what unifies it. Not as shamelessly comic or abstract as First Name: Carmen, Détective approximates the ethos of a traditional ensemble piece. This film reflects on some of Godard’s past fascinations with less an air of cool detachment, adopting instead a warmer sensibility that serves the characters well.

What is stunning about Détective is how it first erects and then demolishes its principle dramatic thrust. The mystery of the prince’s death is introduced plainly, ignored for most of the film, and then solved with an absurd riddle which the two inept inspectors describe in deadpan as “simple”. Likewise, incessant brokering between the other three parties and a love triangle brewing between Jim and the married Chenals leads roughly nowhere. This demonstrates the trivial and ultimately futile nature of human impulse and desire similarly scrutinized in classic Hollywood film noir. Godard has always expressed a wry obsession with film noir as a form and cultural idea, but Détective actively suppresses the standard artifacts of the genre. Instead, it plays with larger, unspoken ideas, undercutting the nihilistic edge with deadpan witticisms and offhand philosophizing. 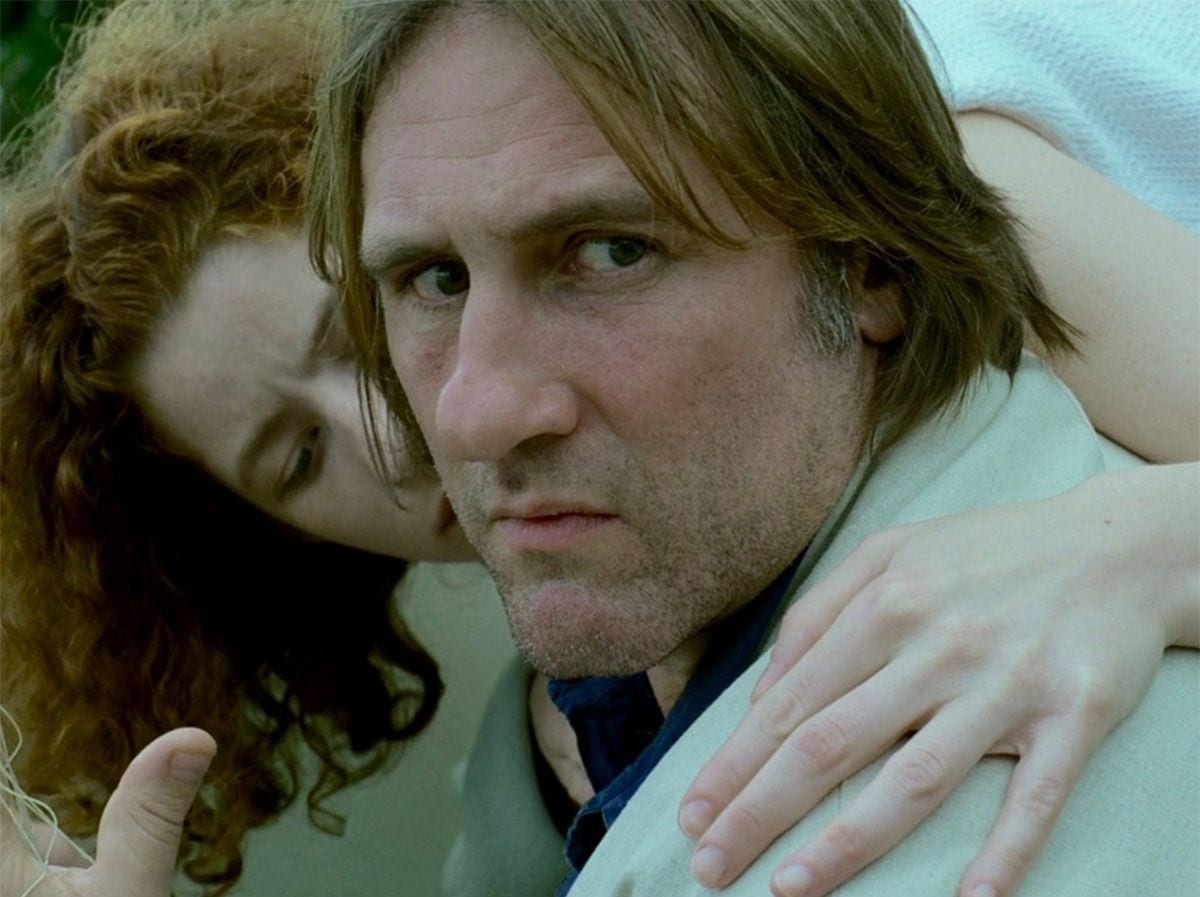 Hélas pour moi, released a full decade after Carmen, is among Godard’s most profound work. It features some of his most poetic language and visuals, but it is undoubtedly splintered and enigmatic, too. The film concerns Simon Donnadieu (Gérard Depardieu), who, after leaving town for a business trip, is possessed by a god who experiences life on earth through his eyes. This mostly encompasses tumultuous encounters with Simon’s wife, Rachel (Laurence Masliah), during which questions of divinity, love, and devotion are raised.

Afterward, a publisher named Abraham Klimt (Bernard Verley) visits the town in search of answers regarding the episode, further probing ideas of storytelling and image-making. These narratives are told in conjunction between flashbacks and flashforwards, creating a montage of intricate mythos against the more grounded reality of Klimt’s story. The fragmented approach is somewhat borne of necessity, however; Depardieu supposedly abandoned the production in the middle of shooting, leaving Godard to restructure parts of the movie around other characters.

It was a worthwhile gambit, it turns out, as Depardieu’s inconsistent presence was useful for creating the ethereal and dreamlike atmosphere that dominates the film. The fissures in the narrative are less deconstructive — as they are in First Name: Carmen or Détective — and more of an appropriate storytelling device. This helps to render the parallels between the subjectivity of faith and the futility of capturing “truth” in cinema.

Hélas pour moi is something of a transcendental film. As critic Jordan Cronk explains in the essay included with Kino’s blu-ray, “Much as Robert Bresson and Carl Dreyer before him, Godard is here fundamentally concerned with the representation of the divine.” The movie is stoic and introspective in its spirituality, but driven by an ontological inspection of both artistic and religious creation. With whispered voiceover narration and Caroline Champetier’s pensive photography of the lush exteriors that make up the setting of the film, the movie even approaches the aesthetic beauty of later-career Malick.

Where First Name: Carmen and Détective are largely refined to discursive action, Hélas pour moi is less purely cerebral and far more emotive, intuitive, and passionate. It’s more show and less tell, but of course even that has its limits in visualizing the impossible. (Klimt remarks at the end of the film, “The rest occurs beyond images, and beyond stories”). Ultimately, it’s unlike anything else in Godard’s filmography.

Granted, that is also true of the other two films, albeit to a lesser extent. First Name: Carmen, Détective, and Hélas pour moi are each the work of a mature, self-assured artist. Godard was gracious enough to revisit past concepts with fresh intention, yet bold enough to have continued marching forward through unknown boundaries. They are self-referential at times — from a filmmaker known more for self-indulgence than self-awareness — but each of them stands alone. Each is more distinct in style, tone, and ethos than Godard had ever before dared to be.

In contrast to his more free-spirited New Wave films, which occasionally dipped into a grandeur Godard rarely allowed himself, these movies are relatively small. They are confined to singular, intimate spaces seemingly removed from the wider world. First Name: Carmen takes place mostly in an empty house, emphasizing the artificiality of cinema. Détective is restricted to upscale hotel rooms and lobbies, meeting places for travellers of distinct origins and histories, urban centers for conversation and conflict alike. Hélas pour moi is all lush and rainy open air, idyllic countryside landscapes to set miracles against. This is Godard in a form of meditative solitude, but still elevating — always pivoting, but maintaining inertia.

Generally, these films have been all but ignored within Godard’s legacy as a filmmaker, given their unique and idiosyncratic nature. It may be simpler to generalize in historical discussions about cinema, to focus on the defined movements and periods taking shape around the films and filmmakers during production. But such context-focused discussions have the tendency to erase distinct or complicated films which aren’t so conveniently categorized or individually celebrated. First Name: Carmen, Détective, Hélas pour moi, and countless other movies from Godard’s second wave and beyond shoulder that neglect, nearly impossible as they are to classify. They are difficult movies, but rare experiences all the same.

It is invaluable in our era of streaming intangibility and dissolving histories that these three “outcast” films are returned to commercial availability. The transfers are pristine and include dependable commentaries and essays to help interpret them, no less. Godard concluded First Name: Carmen with a dedication: “In memoriam small movies.” He’s spent the rest of his career making good on that memorial, and here Kino has, too.